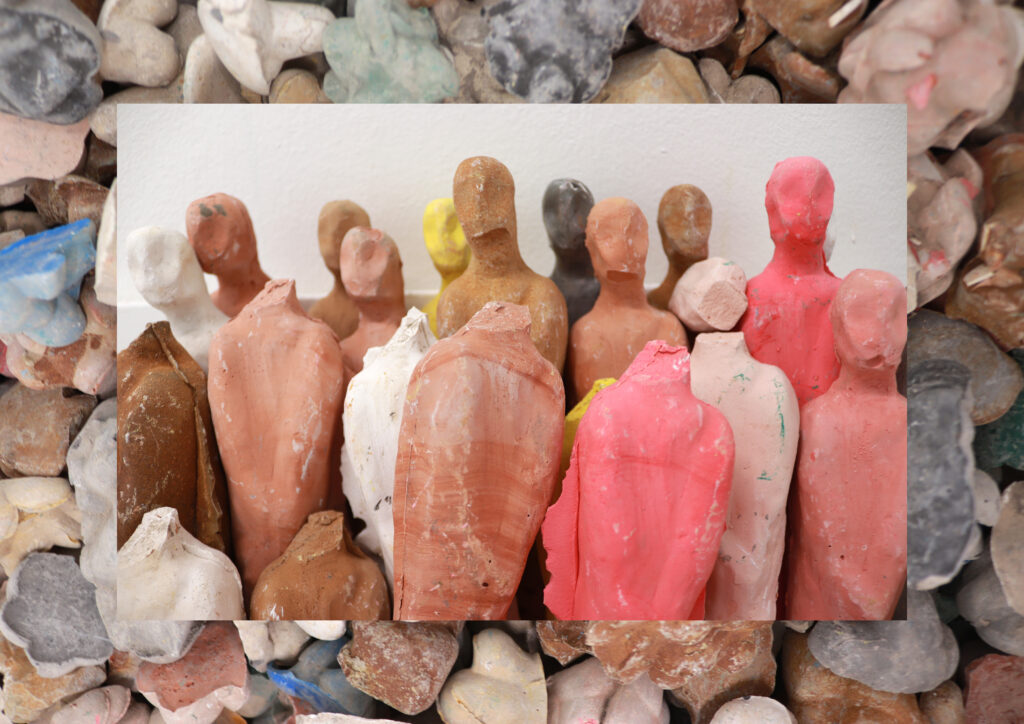 I am an artist living and working in Glasgow. My work is heavily research based, and I often produce work as a justification for a desire to immerse myself in a new field of investigation. I am very interested in the idea of the acceleration of the habitual timeline and the disruption of implied and assumed ‘truths’ of historical narratives. This involves trying to subvert, particularly Western and Colonial, forms of museology and knowledge dissemination, and their associated aesthetics. I am interested in humanity’s relationship with the natural world, the relationships we have with each other, and our attitudes to our histories and futures, and how they all reflect and inform one another. I have a desire to explore my ideas through a diverse range of media and so I manifest my work through material experimentation, and often the use of film and other photographic media. These serve to carry this dissemination and questioning of ‘truths’ in an exhibition context, by creating contingent and porous environments for viewer interactions and consumption in the presentation of a constellation of imagined histories and futures. Viewer agency is integral to the interaction between them and my work; I don’t want to prescribe certain meanings upon viewers but instead give them space to move around the work freely and create their own narrative and create an environment where the questioning of ‘authorised’ historical, academic and artistic rhetoric is highly encouraged.

The object lives in the palm of a hand. It may be the perfect size to sit cradled in the space inside a closed fist.

Or perhaps it is the smooth handle of a greater tool that slots as if it were not there between the four fingers and the thumb, extending the arm of the holder.

The object might be awkward; lighter than you expected, chalky, sharp, slippery to the touch. Maybe slightly too large and slightly too heavy making you hold it strained in the tips of your fingers.

The same objects which are for some used day in day out, with such a lack of second thought and ease they almost become extensions of the self, are for others representative of entire civilisations, mounted, studied, admired, fetishized.

Objected lie interned in the ground for years upon years, in tombs man or earth made, waiting to be unearthed, discovered, given new life. An archaeologist might see the earth as a marble carver might see a bust hiding in a rectangular block or a carpenter a book case in an oak trunk.

The objects mutter among themselves that they do not wait for us, hide from us, or owe their meanings wholly to us. Some of their lives they live with us, others they undertake entirely on their own, witnessless. Sometimes they tell us what we must use them for, other times we tell them, a lot of the time we make things with the express purpose of doing something that will help create something else which we need to do some other specific thing. Things make things make things.

An object may be cherished in one life, resented in its next, the broken, then repaired, replaced or discarded. They are used to record experience, to represent a place, a journey, an achievement.

A thing that once lived as part of a mountain might now live as a pebble annoying you in your shoe while you walk to get a sausage roll. The same thing might be reproduced countless times over, and despite the excess and waste of the process one of those cloned things might be someone’s most prized possession.

Even though they can live without humans, the lives objects spend with us are defined by how we relate to them, in the same way as the objects we surround ourselves with can come to define our existences as we use them to initiate or relate them to our own experiences. Functional, sentimental, ornamental, worthless, priceless, timeless. Objects are used to fabricate, to uplift and empower, while also being used to destroy, belittle, take life.

The object is not good or bad, it just is.

The object might be political, cultural, controversial, natural, forgettable. What do you see in the word object? What object are you picturing now?

The object lives to universalise and individualise. It’s not hard to find a pen; pens are everywhere, pens are pens, pens write. But who is writing, and what is written, where, and that pen that they are using, that pen is powerful, it is a tool, it speaks for the brain, it releases the words, but that pen is just as true as this ne I am using now, just as true as any pen on the planet, even those which go unused.

The object might live for a thousand years. It might change form or material, erode or fossilise. They describe one another, some objects now sit along a path of whispers, pausing through time, each thing modelled on things which came before. But these paths of history are not always visible, trackable, or honest. Objects can be appropriated, thrust into a life of exile and isolation from the life they are meant to be living.

The lives of objects can be warped, tweaked, fabricated to influence present minds, to disconnect from values, from the planet, from the things we surround ourselves with. The object lives many lives, and is always haunted by the ones which have come before, but exists in a multitude of freedoms knowing its potential to live any and all lives. Things are things, and we make them such, but they also do to us. 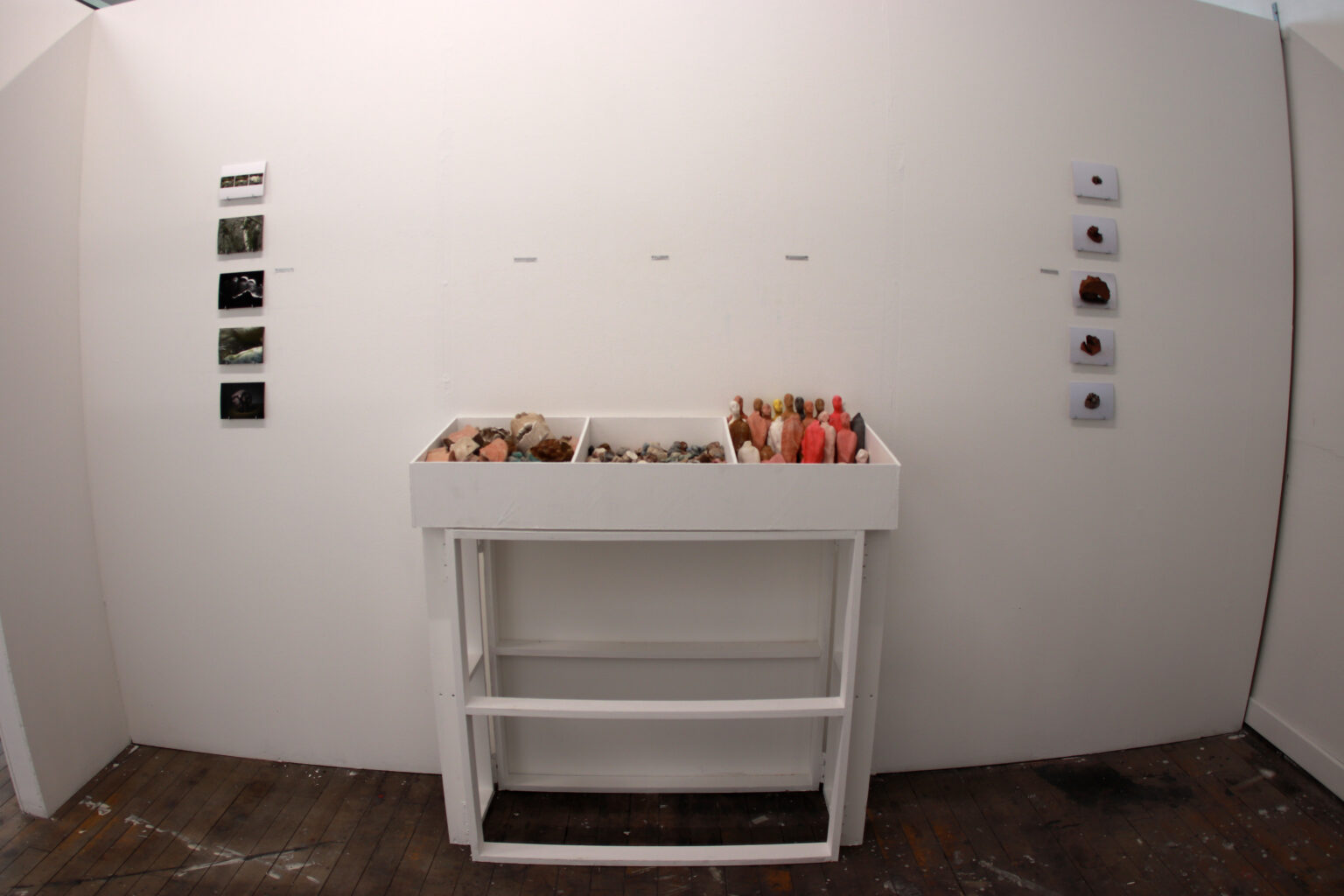 The Object Lives is a multimedia installation, comprised of a piece of text (left), a display case of sculptures, reproductions and explorations of these sculptures presented via postcards and a video, and 2 relief plaster casts. The audience is placed in the middle of a constellation of different elements, and invited to handle, examine, and individually explore these elements and the relationships between them, so that each viewer hopefully has a chance to create a personal interaction and narrative relating to the installation. The piece aims to make the audience consider the objects they surround themselves with, both contemporary and historical, examine their relationship with objects in general, and question the insititutions which so often give us access to and information on objects.
1 of 6
Previous Next
Close 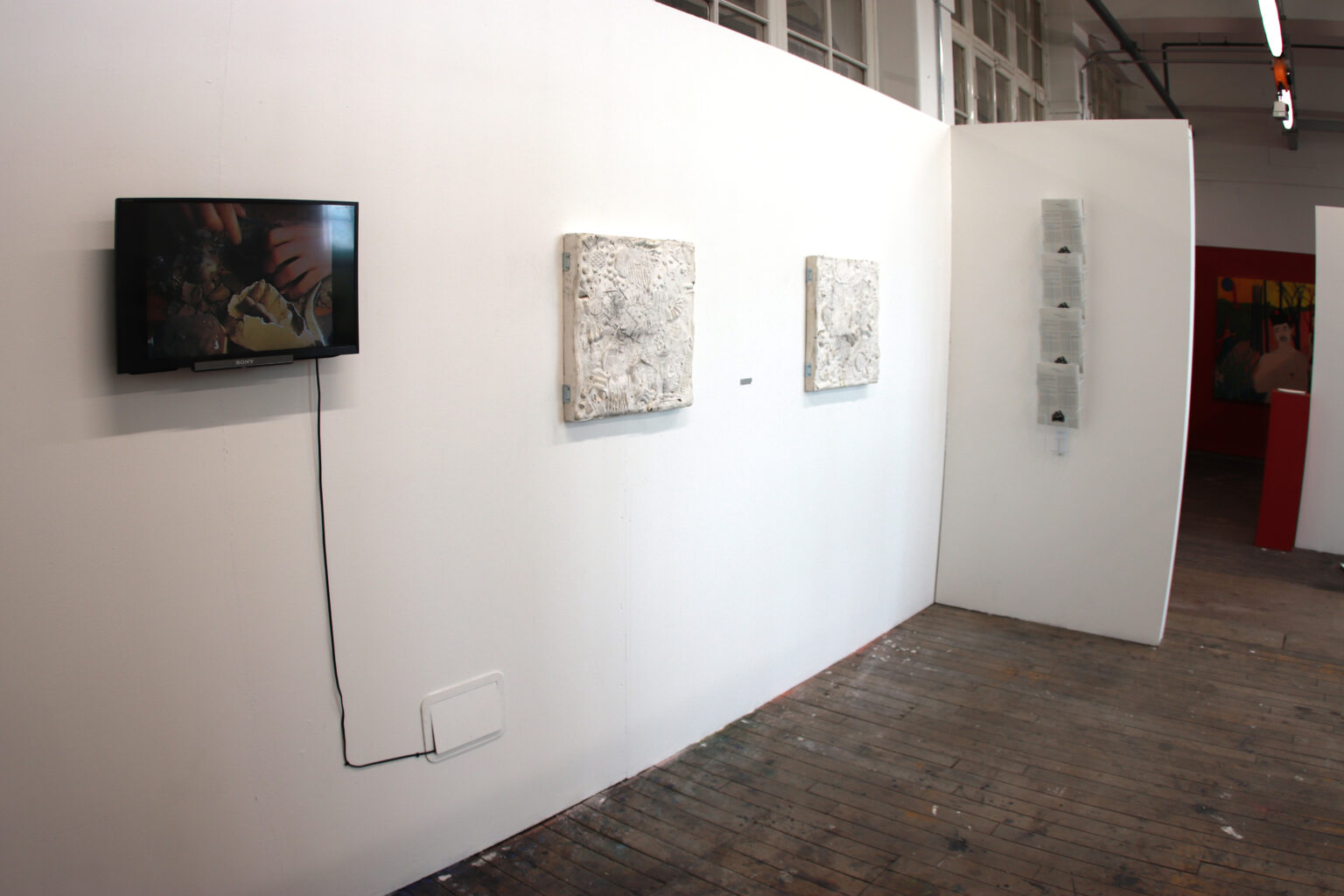 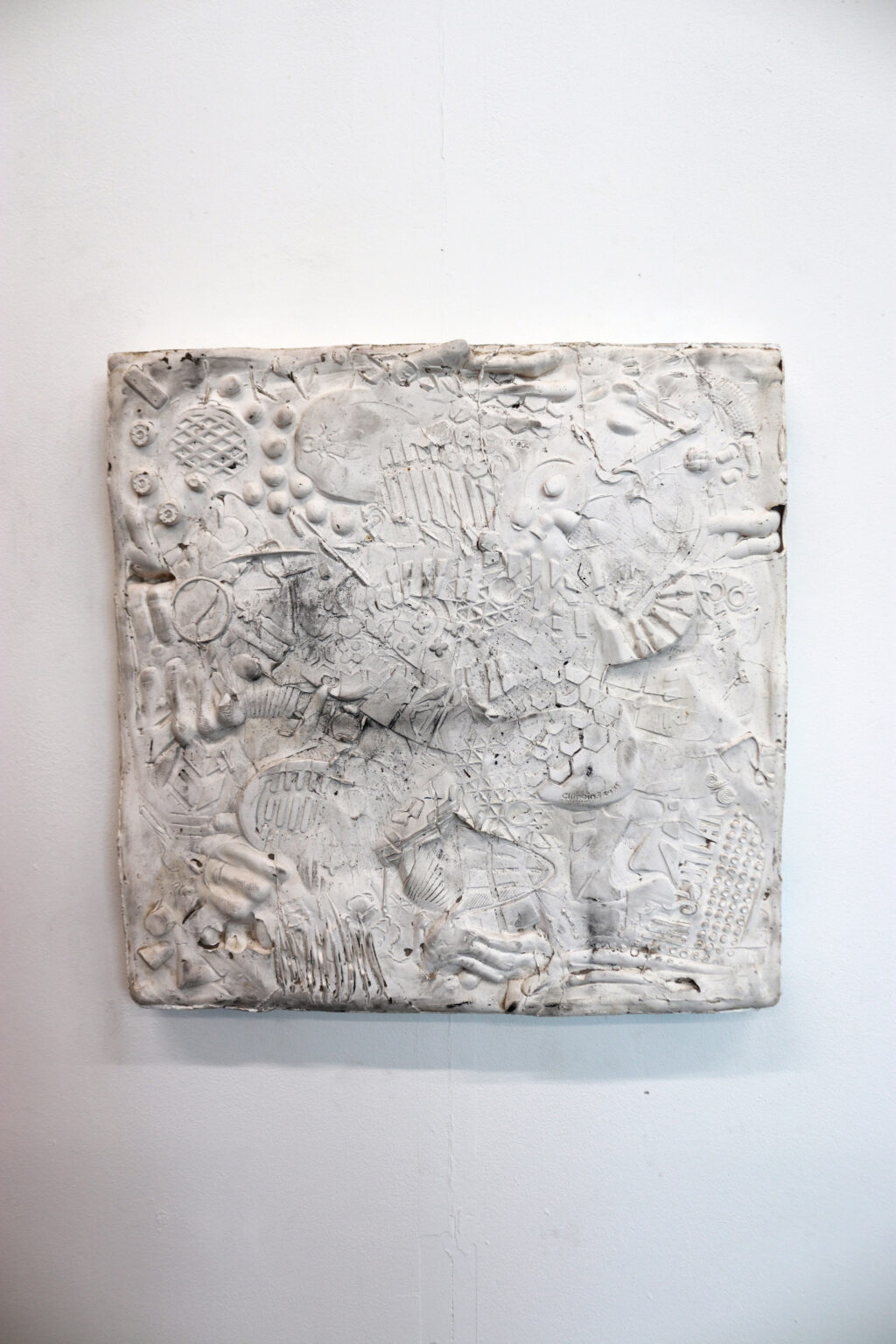 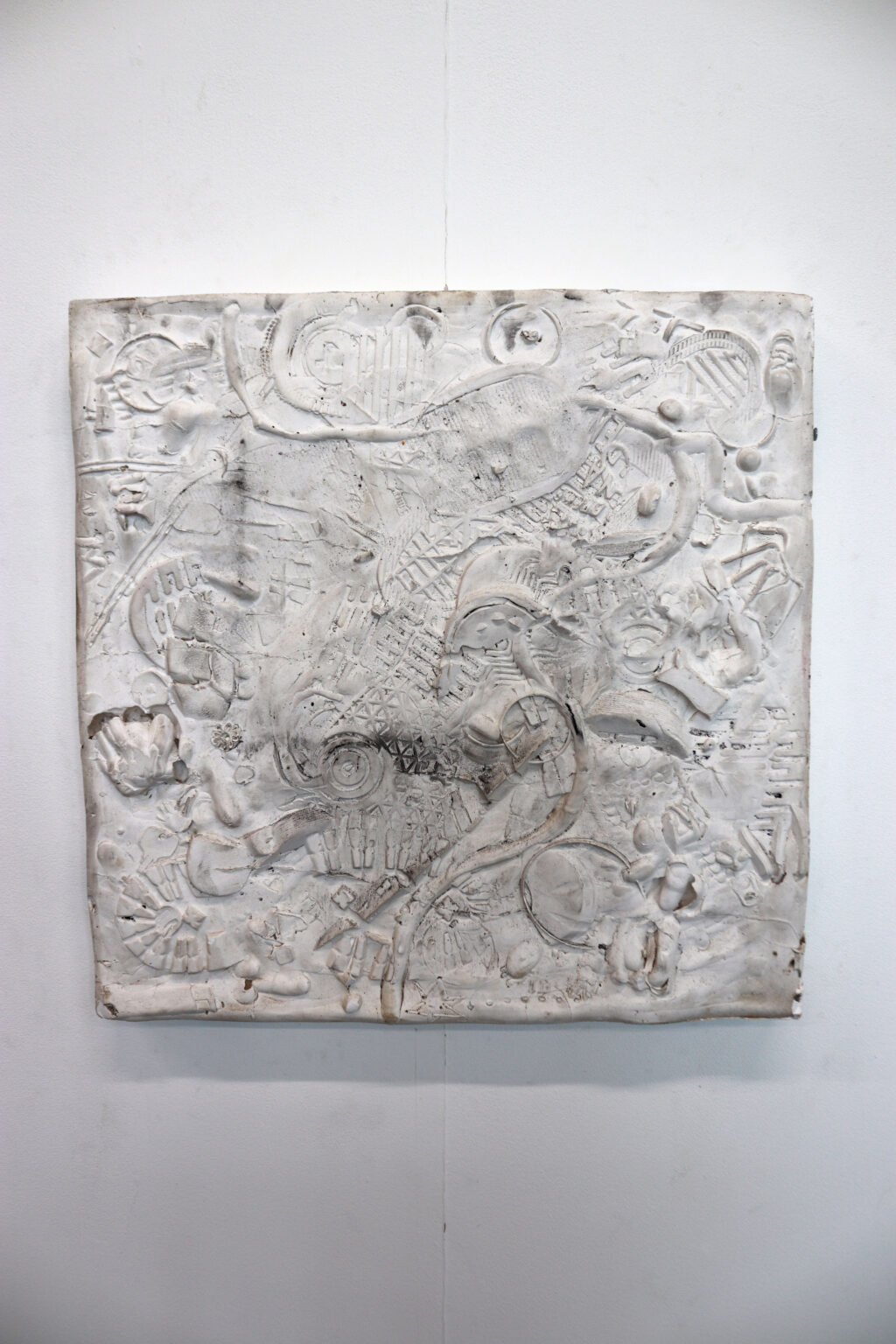 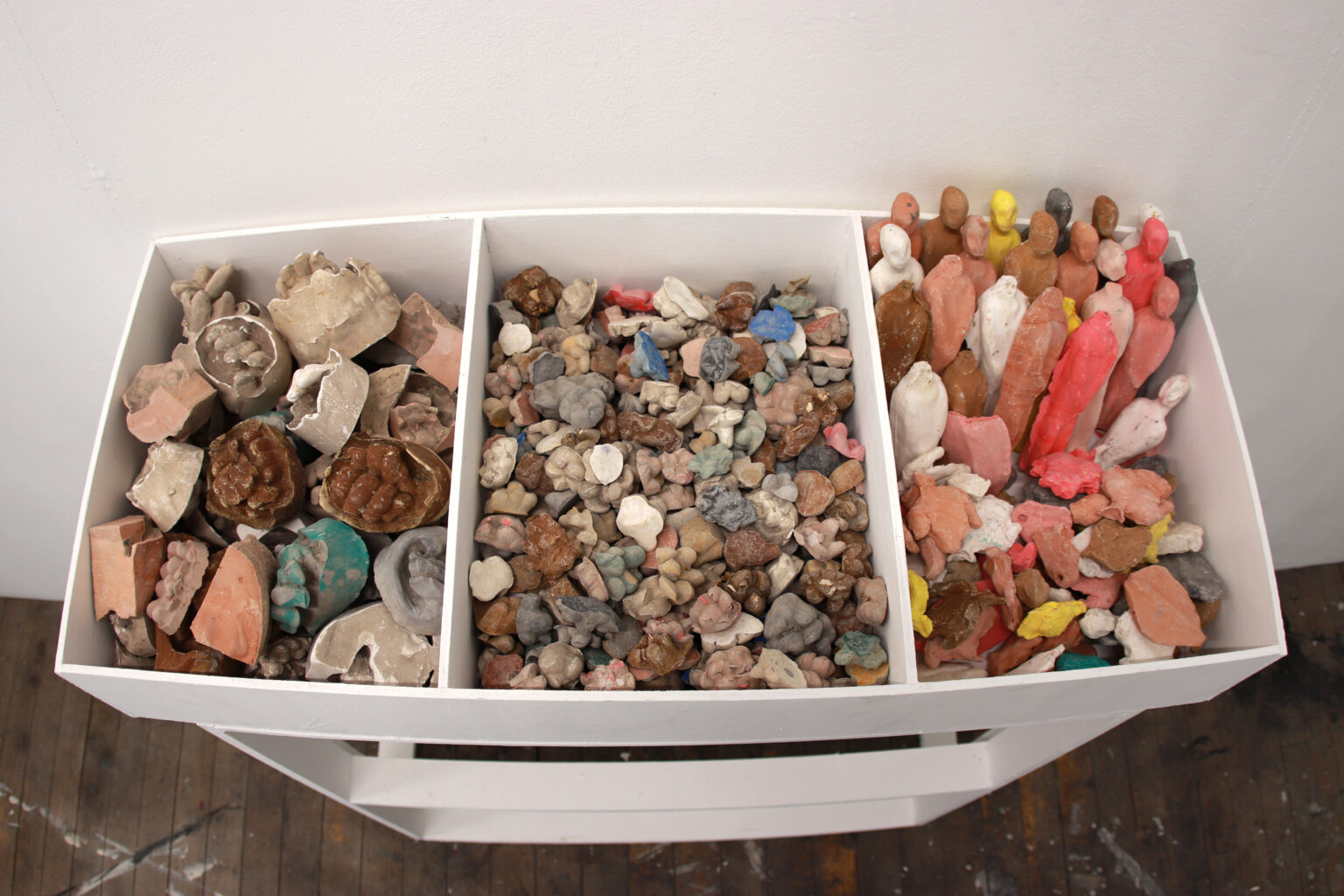