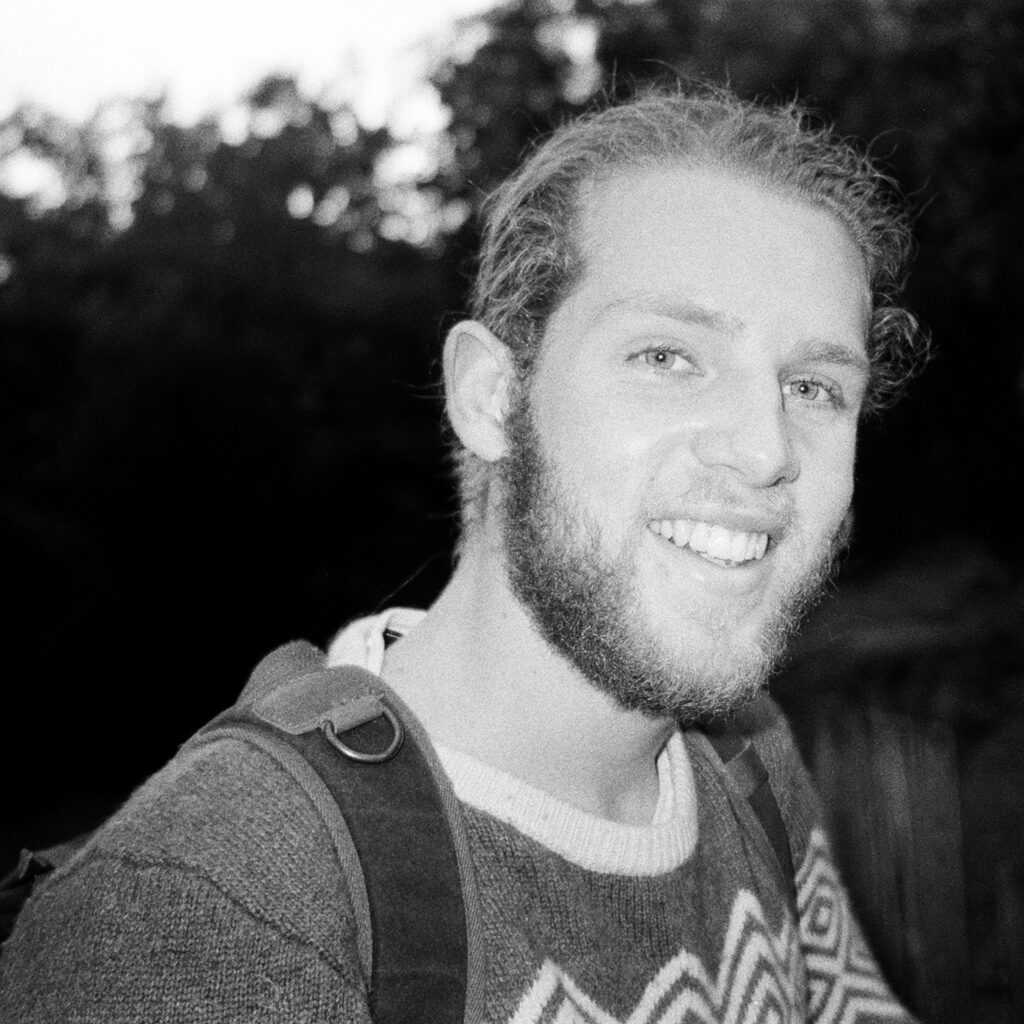 Scottish architecture graduate with a particular interest in designing sustainable and biophilic places that create social, vibrant environments working to enhance building programmes. His post-graduate work has focused on developing and encouraging exciting routes through the urban landscape that provoke new interactions between inhabitants, strengthening communities both in and around buildings.

Urban Oasis – The School of Life

Urban Oasis – The School of Life

To address the brief of The Ethical City I endeavoured to challenge what I believe to be two of the largest universal obstacles facing the city of Glasgow and society as a whole. Firstly, the invasion of motor vehicles into modern life and the space they demand within the urban landscape. Beyond this, addressing the current transport hierarchy particularly within Glasgow, attempting to integrate modern urban design principles to encourage a fundamental shift. Secondly, the increasing lack of natural integration in anthropocene construction, particularly in dense urban environments, aiming to encourage use and understanding of natural biological creation methods. Creating a edifice that can stand as a bastion to the Ecozoic Era within the City of Glasgow.

My research assessed paths and boundaries within the city and their intersections, questioning their potential as influential nodes or landmarks. The process was then attempting to create connections between these paths/boundaries that would contrast daily urban experience to encourage users to reflect on their surroundings. My investigation of connections and contrasts lead me to the intersection between the city’s main river and roadway, whilst integrating a forgotten railway station. Finally, creating contrasting environments inspired by prospect & refuge theory to enhance the journey between intersections.

My solution was a symbiotic botanic promenade and educational facility that promoted reflection and interrogation of the built environment through passive and active engagement. The design aligned public and private programme to break down barriers and create intrigue, with spaces for individual reflection contrasted by various scales of social and performance areas in which knowledge could be disseminated and works could be exhibited. The proposal provides interior and exterior civic spaces, well suited for Glasgow’s unpredictable climate. The route connects a currently neglected train station to the edge of the River Clyde, underneath the biggest man-made, pedestrian boundary in the city.

The two main construction materials have been selected to enhance thesis’ intention. Externally, three-layer, ETFE cushions supported by a lightweight steel framework, connected to the existing monolithic pillars that will protect the interior from the harsh exterior environment whilst allowing the proposal to remain connected with the wider context, creating conversation between the two habitats. Internally, hydroponic living wall modules will surround and protect the interior programme, supported by a network of heavy, mass timber elements. 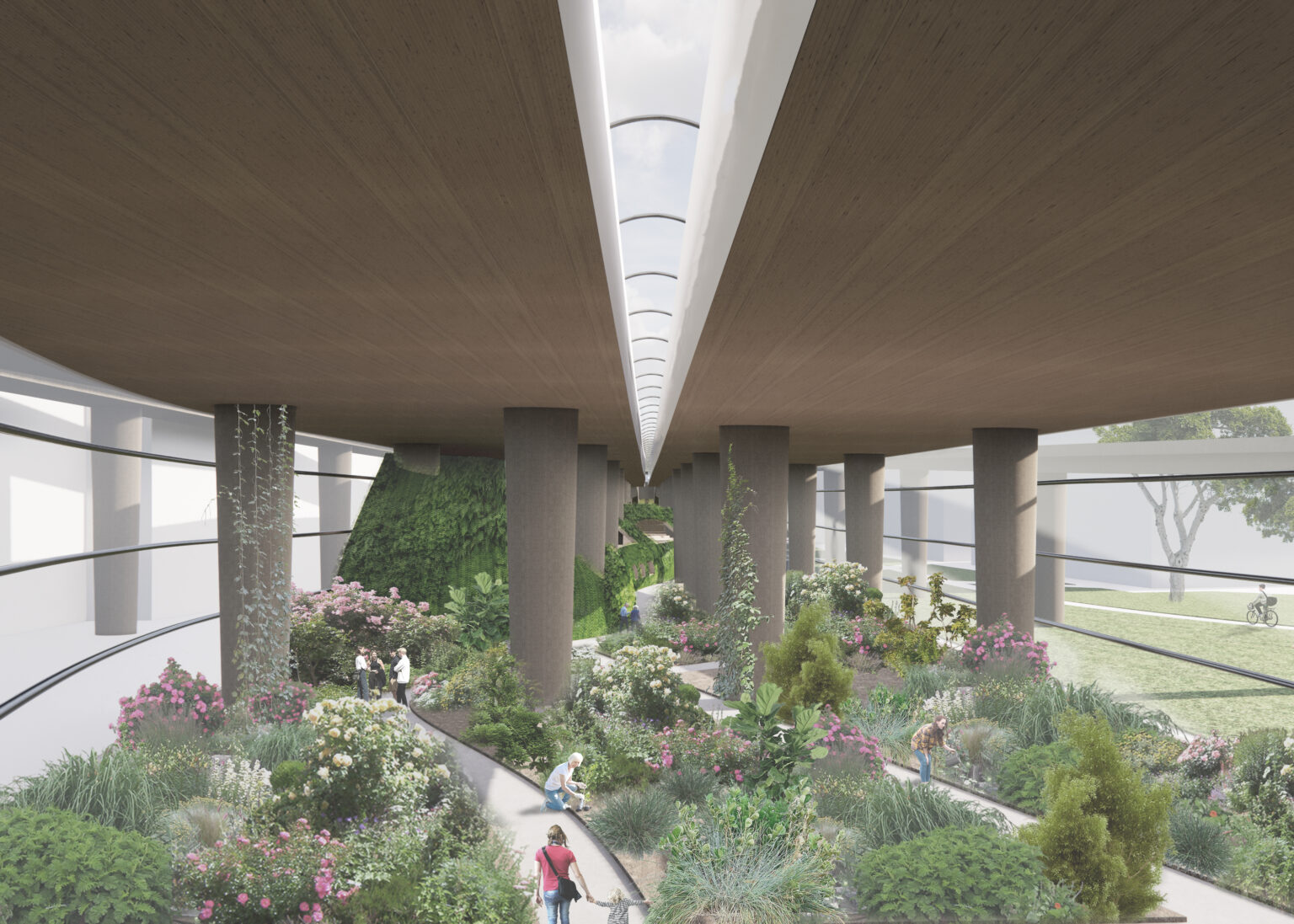 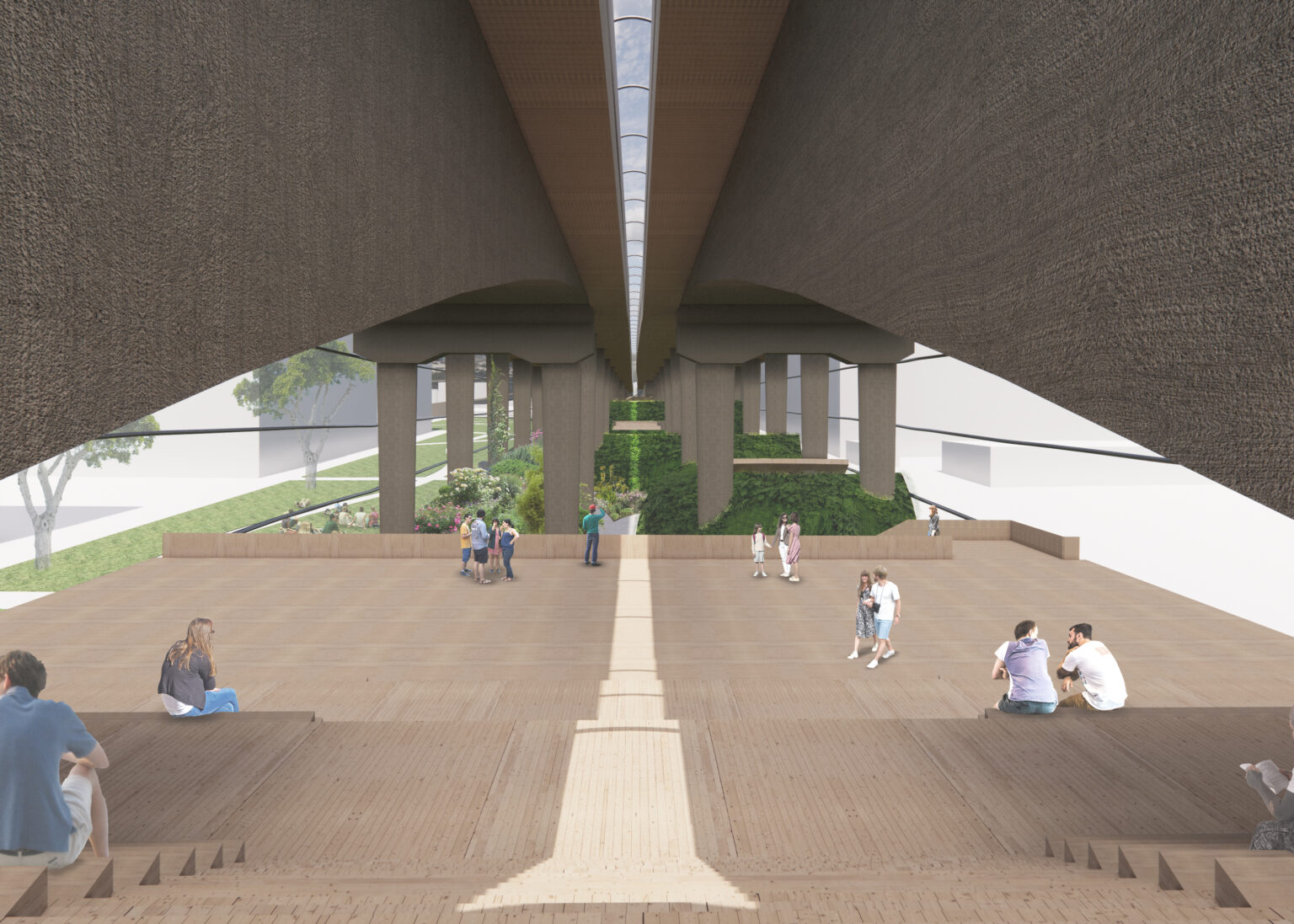 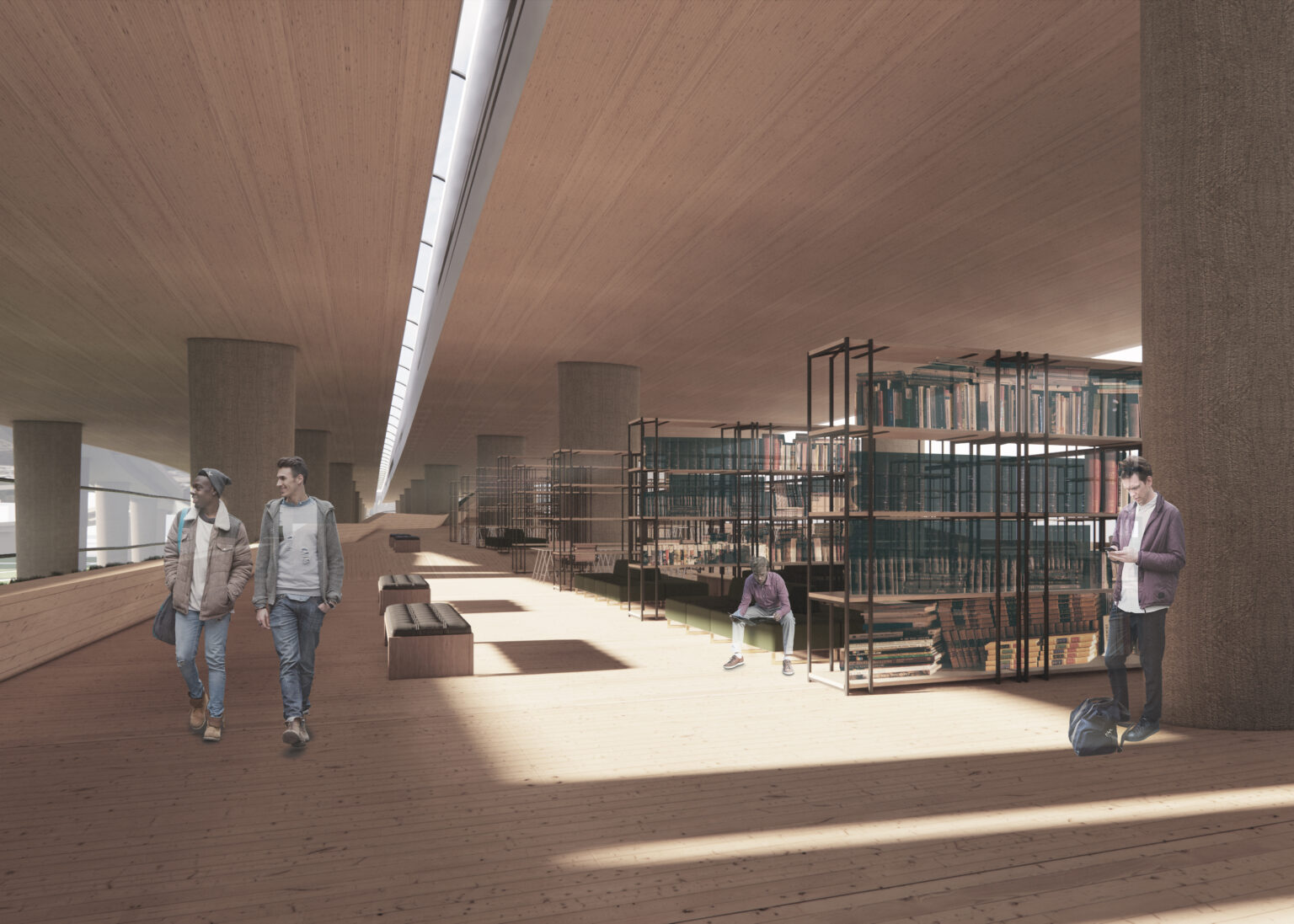 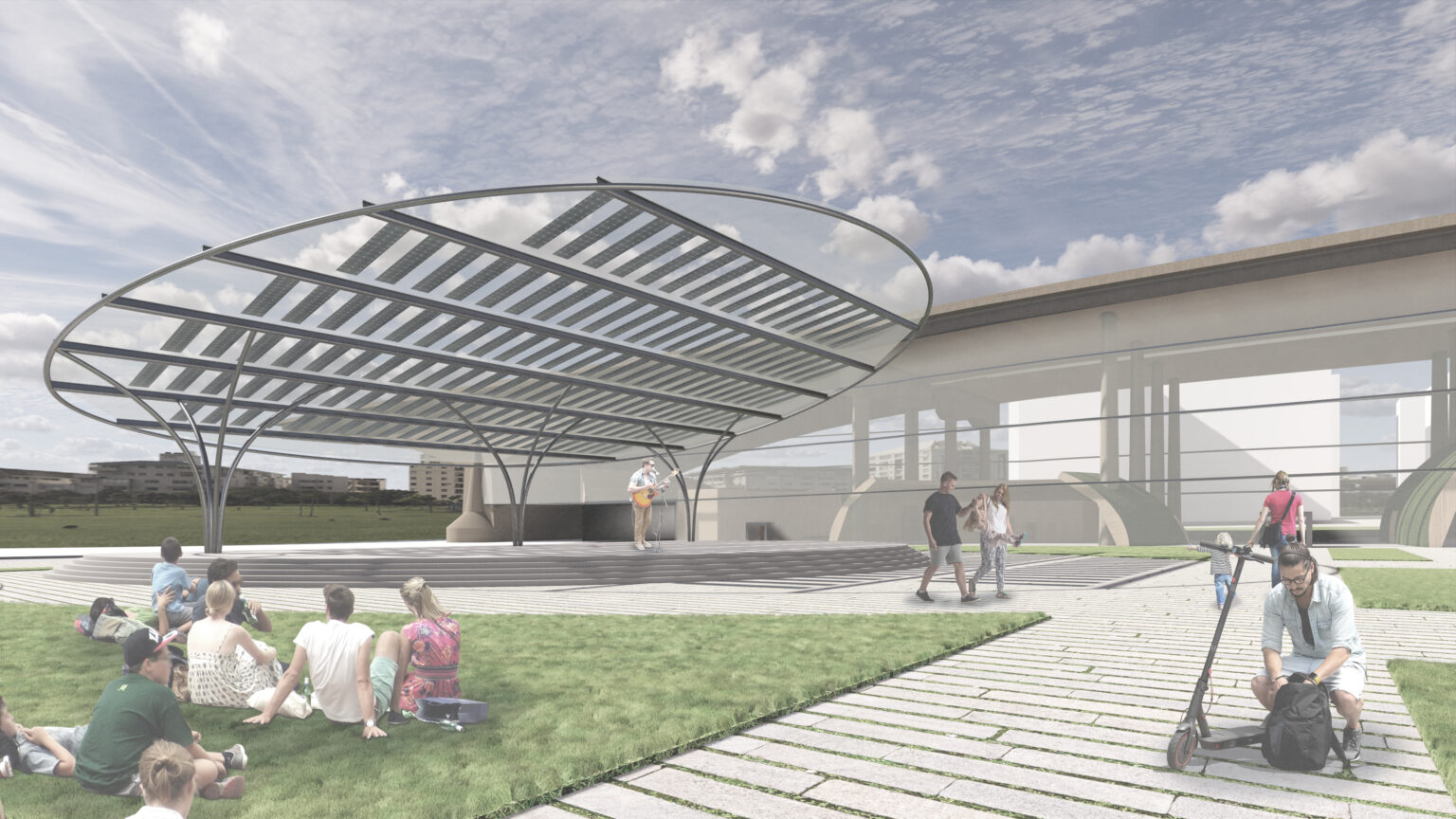 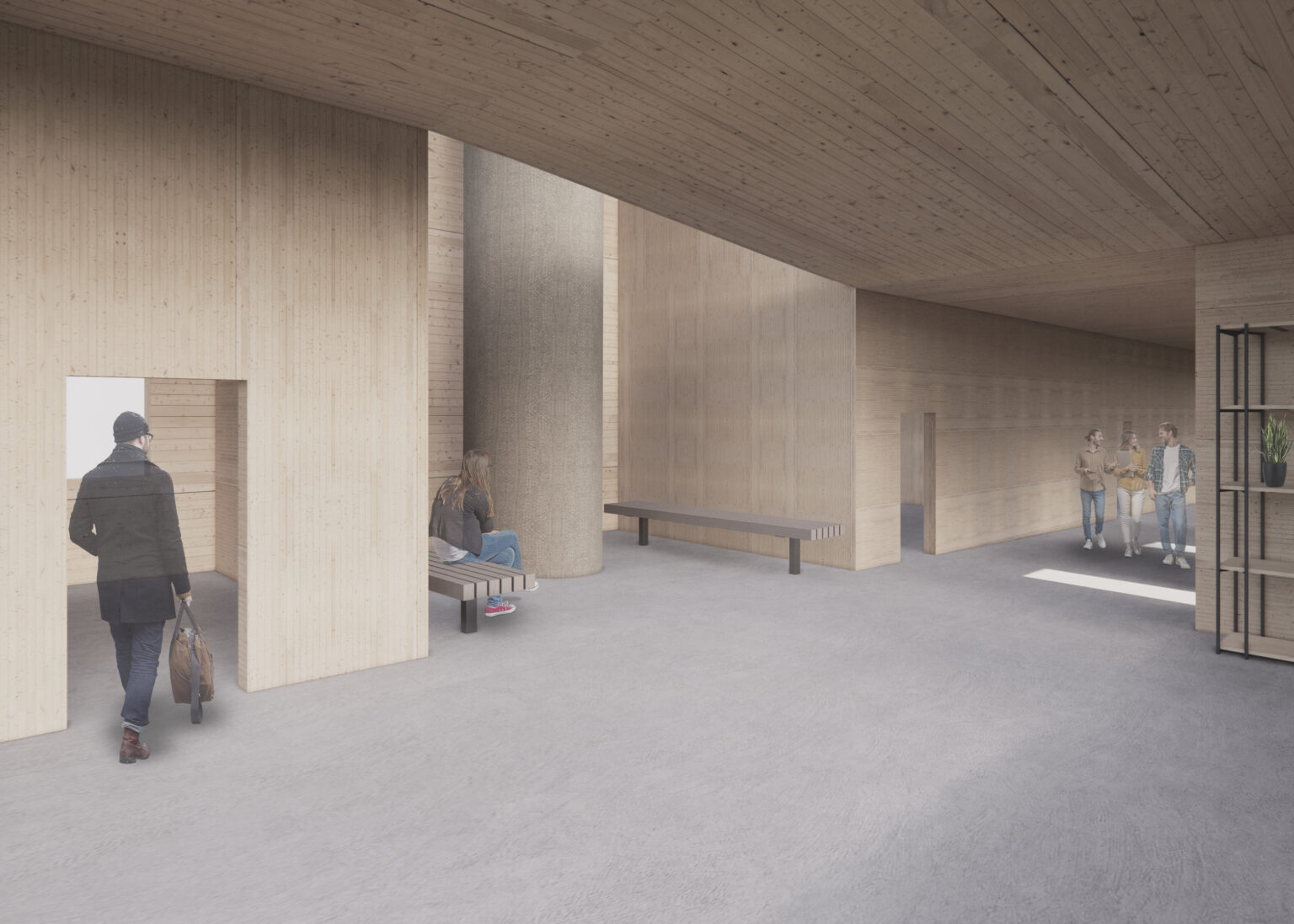