School of Simulation & Visualisation Sound for the Moving Image 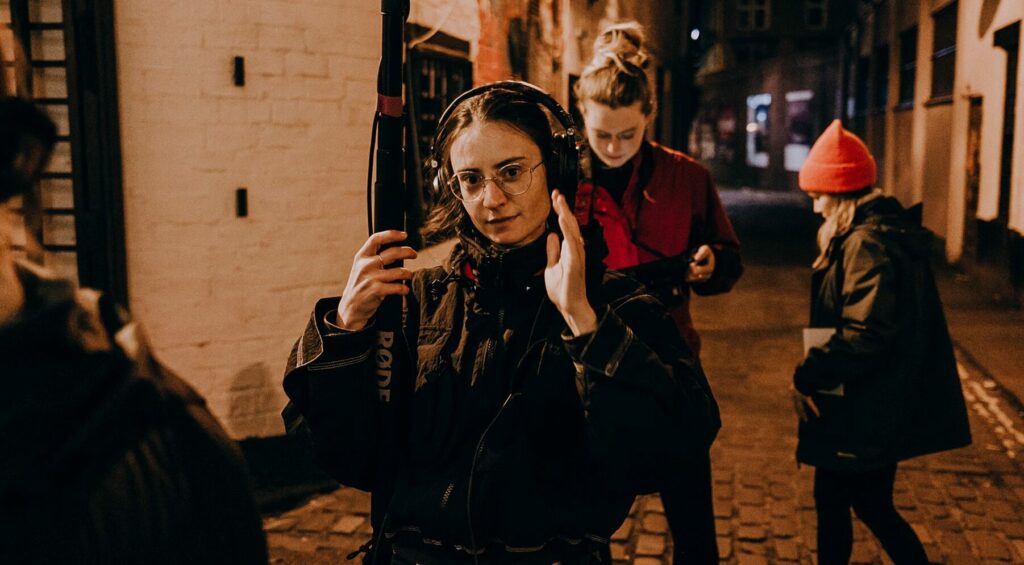 Margarita Lioli is a sound practitioner and engineer from Chania, Greece, currently based in Glasgow, with a philosophy, sound design and engineering background. Her love for Film started in her teens, mainly directed at Arthouse, Neo-Noir and Sci-Fi genres, developing an interest that led her to explore a deeper look into society by studying Philosophy in Greece. After relocating to Glasgow, that natural curiosity grew into a passion for Sound and led her on an academic journey seeing her complete a Higher National Diploma in Sound Production and a Bachelor’s degree in Sound for the Moving Image.

During her time at GSA, she has developed various technical skills that span from 360-degree Sound to 5.1, Binaural recording/mixing and Audio/Video editing, alongside a systematic and experimental approach toward Sound for Film and TV. This wide range of experience and her adept capabilities in ProTools have allowed Margarita to establish herself as a versatile, multi-disciplinary sound practitioner and recording/mixing engineer.

This showcase highlights Margarita’s work during her tuition at GSA, which allowed her to explore Sound as a device with endless possibilities to be engineered as a tool to evoke emotions for Film and Moving Image. Her manipulation of fascinating sounds is at the centre of a core theme: Sound is a malleable material that can be reshaped and repurposed as a modular tool for self-expression. Current avenues of interest and research in her practice centre around states of consciousness within unusual environments that allow her to explore auditory perceptions in various and unique sonic environments, focusing primarily on Psychoacoustics. In her compositions, she uses techniques found and inspired by musique concrète, playfully exploring the tonal qualities of Sound with a focus on different textures to evoke playfulness and a sense of discovery in the audience. Her work invites the listener to engage with the deep listening concepts set by Pauline Oliveros that encourage people to closely observe the Sound that occupies the space of their day-to-day life.

Margarita has previously recorded artists such as the Glasgow-based The Bellybuttons and has been credited in the short films, Axed (2021) and Ri Cheile (2022) and BBC2 documentary series Union (WT) (2022) as a Sound Recordist. 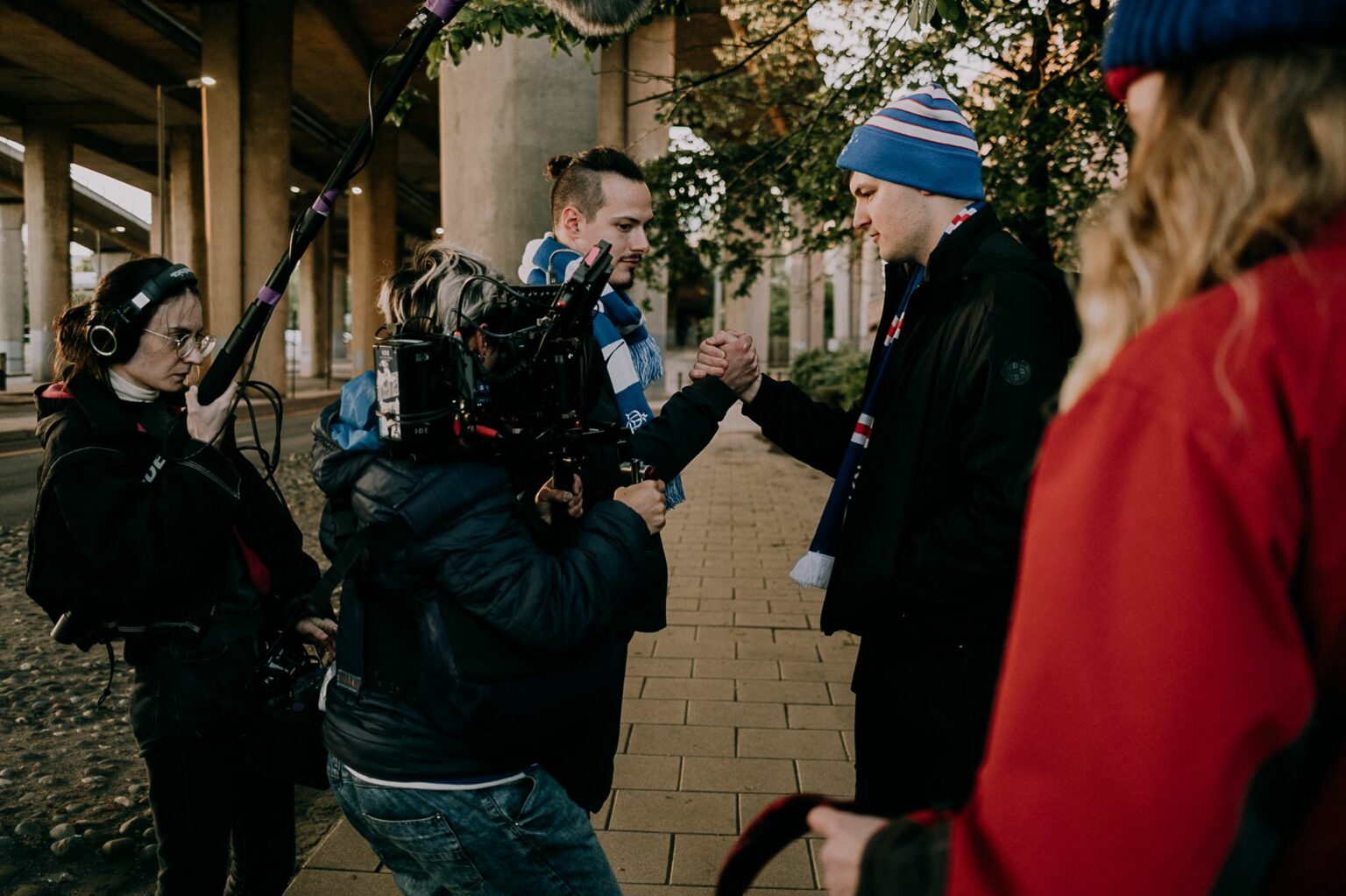 Infected (2022) is a narrative-based short film created as part of the Short Sound Film course of Year 3, conceptualised and filmed in the 2020 COVID-19 pandemic and lockdown. The imposed self-isolation and its effects on our day-to-day life are integral to the theme of the film. The narrative centres around the conditionings of modern life and its rigorous rhythms synthesizing a dysfunctional lifestyle. Human alienation, and the intense use of technology and social media impact human behaviour and psychology. High importance and value are given to the use of everyday sounds forming a counterargument on the dependency of technology into question to suggest an alternative way of interacting with sound: the attentive listening and appreciation of everyday sonic environments. Influenced thematically by Yorgos’ Lanthimos, Lobster (2015),  Darren Aronofsky’s Pi  (1998) and Dogma 95, this short moving image sequence encapsulates the claustrophobic world of the protagonist and is being expressed visually through a range of medium and close shots. Handheld shots are used to create intimacy with the viewer and express the character’s psychological state filled with anxiety, loneliness and confusion sonically enhanced with the use of hyper-realistic sounds of his sonic environment. The mise-en-scene reflects his dull and bleak emotional state framed within a dark and sterilised living space.

The narrative development is unravelled within the blurred boundaries of reality and illusion, creating a confusing structure and widening the scope of interpretation for the viewer. The repetition of day-to-day tasks and emotional struggle interweave the understanding of the character’s reality: the ostensible stillness of his treadmill is intertwined with a turmoil of emotions. The sound design responds to these themes by expressing the emotional state of the character whilst also evoking tension and the sense of the uncanny when a virus infects his computer and his domestic comfort and routine is disturbed.

In considering the amorphous boundaries of music and sound design whilst reflecting on the influence of contemporary music expanding the traditional notions of performance, this film focuses on sounds heard everywhere around us. The character’s loneliness is situated in a claustrophobic environment inscribed into the time continuum through the collection of sounds expressing the tension between the character and his surroundings. Rhythmical sounds of the character’s sonic environment such as a clock ticking, water dripping, and heart beating accompany the static shots that dominate the screen. The long silences expressing the “room tone” are intergraded and layered with long sustained and looped minor notes, high pitched and thick textures aim to express the feeling of frustration and desperation whilst also providing a continual warning and evoking suspense to the viewer. A wide range of different microphones; contact, hydrophone, coil pick up, dynamic and condenser are used to achieve different textures and tones. More specifically, the computer virus is contextualised in the transmissive nature and fluidity of the actual virus using a hydrophone and electromagnetic coil pick up microphone to capture sounds. The sequence has been edited in Premiere Pro, sound designed and mixed in ProTools. 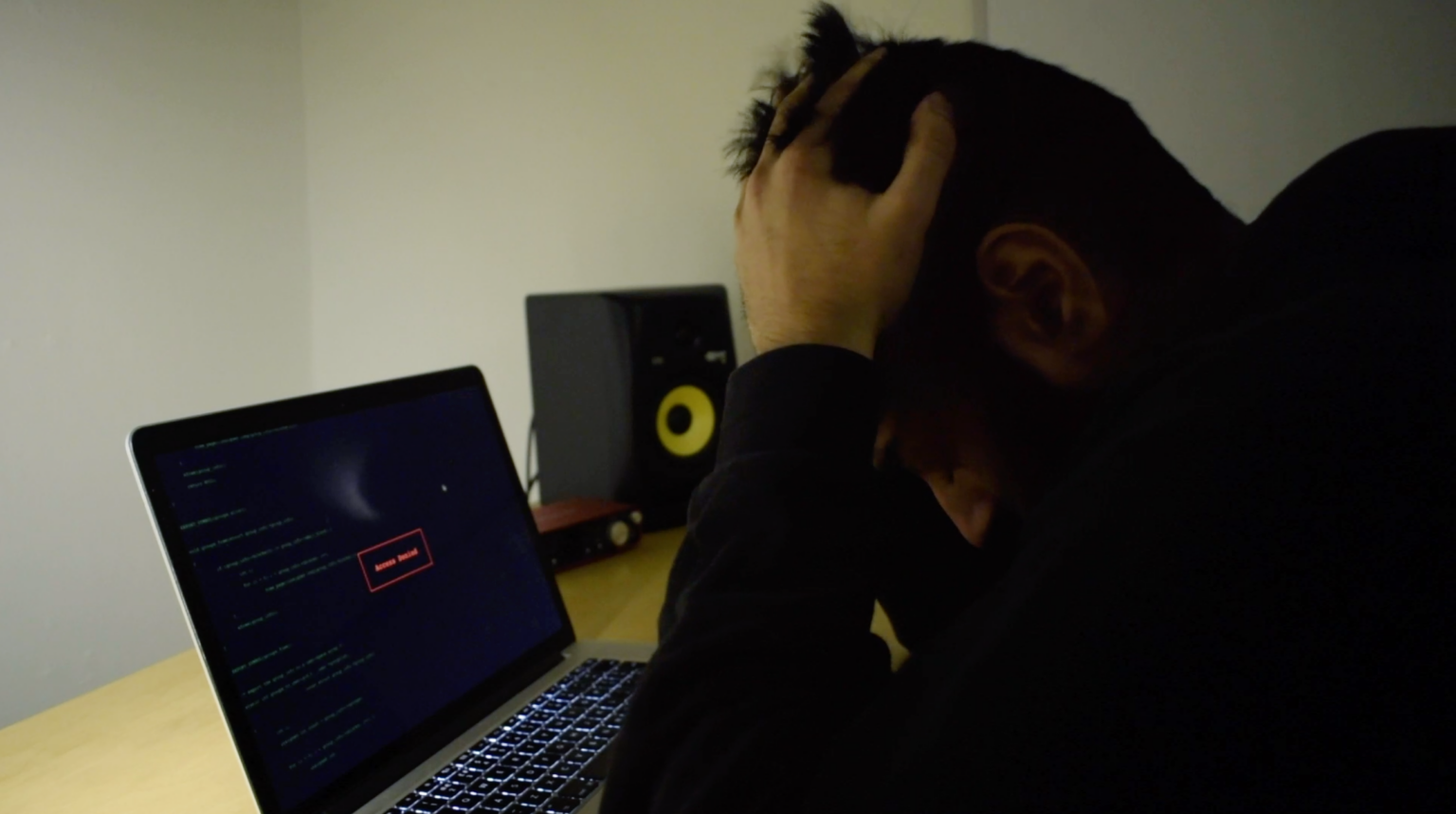 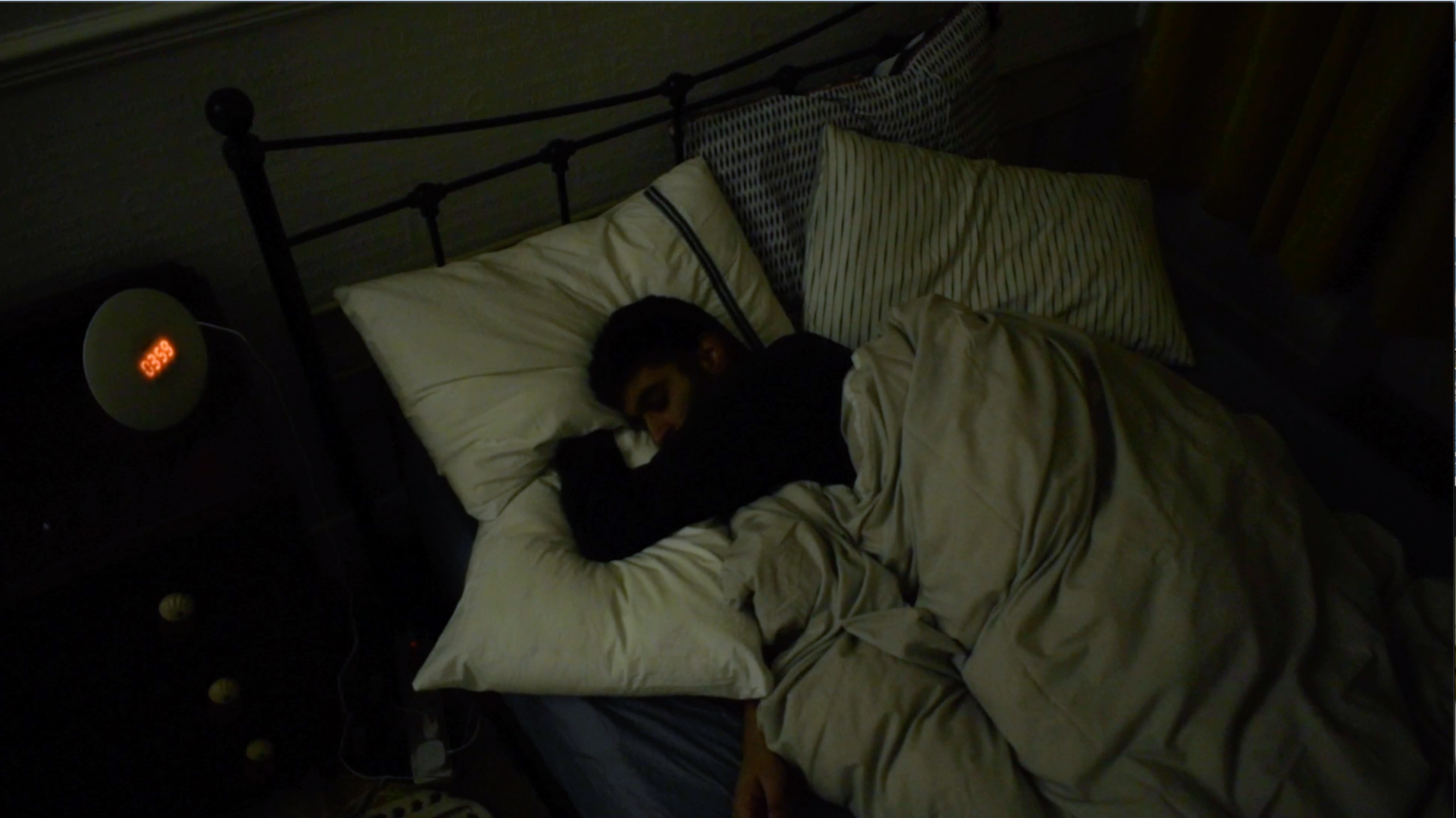 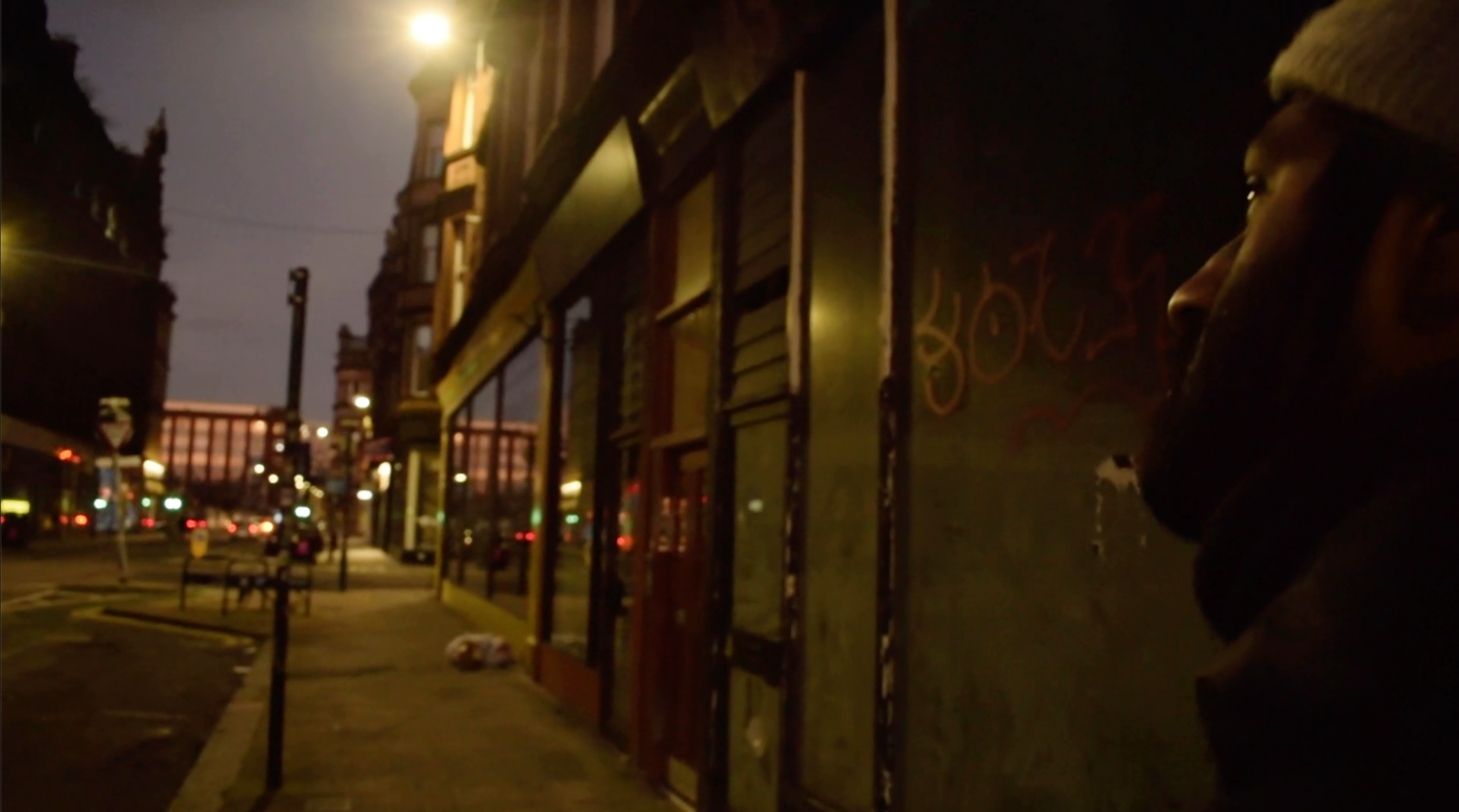 Hypnagogia is a sound only piece that aims to express, sonically, dreamlike sensory experiences and consists of various hallucinatory visual phenomena. Hypnagogia draws inspiration from different sonic disciplines ranging from electronic house music to broadcast radio and sound for film. Using a collection of field recordings captured with various microphones and applying a range of techniques, the sounds have been modulated harmonically and dynamically to achieve different textures to simulate the sensory phenomena that someone might experience during these short episodes of dreamlike sensory experiences.

In contrast to dreaming states (REM), dreamlets are usually experienced during the transient states of decreased wakefulness. The soundscape itself echoes the brief duration and static character of auditory, sensory and visual phenomena such as geometrical shapes, images and patterns, changing speedily from one form to another through sonic passages. Finding inspiration from the work of Pierre Schaffer, Delia Derbyshire and DJ Sprinkles, this soundscape utilises a variety of field and foley recordings, sound effects and wavetable synthesis compositions aimed at achieving an accurate depiction of Hypnagogic hallucinations. Recordings of static and kinetic sources captured from shotgun, contact, hydrophone, and electromagnetic coil pick up microphones introduce foundational layers of textures and tones. Vocal and spoken word samples form a meaningful argument depicting the complicity of the human psyche. The recordings have been spliced, multiplied, reversed and layered with synth pads arranging a series of brief sonic passages that simulate the visual, auditory and kinaesthetic phenomena – a critical aesthetic goal to strive for when concerned with Hypnagogic states.

Pro Tools is used to edit, design and process all captured sounds with Time Domain Effects and Equalization. 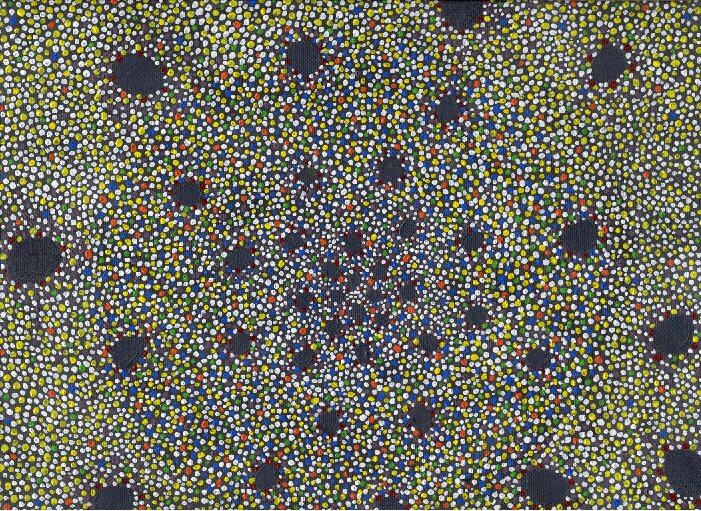 This binaural soundscape is informed by extensive research into foetal auditory development and sonic environment in humans to replicate the auditory development of a foetus during the prenatal period of its development by recreating its internal sonic environment from the 25th week of gestational age, when the foetal auditory system becomes functional, to the 35th week and until its birth. The intrauterine sounds produced by the mother are audible to the foetus and replicate the in-Utero environment. They include maternal respiration, heartbeat, digestive activity, maternal vocalisations, and movement and are attenuated more than the exogenous, ex-Utero, sounds such as music, room & field ambience, and speech creating a visceral, immersive sonic experience.

Through dynamic processing and equalisation across the low and mid frequencies, panning 14 sound objects across a 360 spherical space, this soundscape simulates the spatialisation of sounds in the environment in-Utero and ex-Utero. The moving sound objects reflect the localisation of the sound sources reaching the foetal inner ear, which is filled with amniotic fluid and the minimal movement of the foetus until the 33rd week of gestation when the foetus changes position within the uterus. This sound only piece uses binaural sound technology to create an immersive spatial audio experience for headphone listeners by providing a richer sense of space, and higher audio definition, evoking the sense of presence for the listener whilst also referencing an experience they once had and that we all share in common.

Processed in ProTools and mixed in Reaper, this piece comprises samples, binaural, stereo and voice-over recordings.

This piece is designed to be played back over headphones. 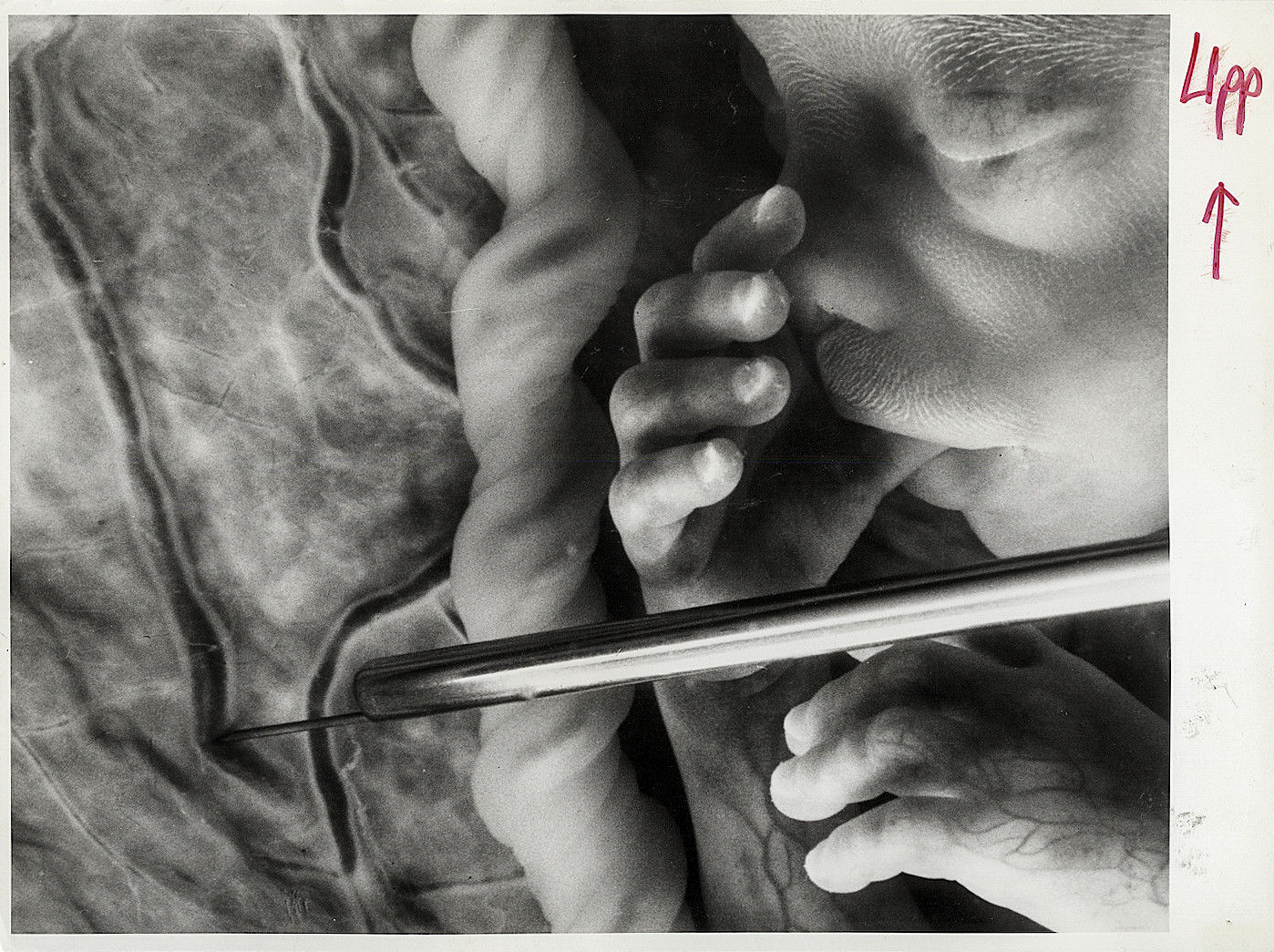 The creative approach of both Sound Design and Music Score is based on the dystopian theme and genre of the film. Complementary to the atmospheric music score of sustained pads, the sound design aims to be “realistic”, “natural”, and primarily dietetic following the action on the screen. Influenced by David Lynch’s film Lost Highway (1997), the sound design aims to create a sense of void and depict the main character’s confusion whilst eliciting an ominous sensation for the next scene, highlighting the ambiguity of story development. Additionally, industrial soundscapes are used as part of the mise-en-scene providing realism for the engagement and investment of the audience.

Emphasis is given to sounds that elicit tension and fear, such as industrial alarms and explosions featured at 4:33 mins. A high-pitched ascending tone introduces the explosion accompanying the strobing lights on screen. A volcano recording, layered with high pitched sound translating to the fire burning and flame blow, and low-frequency rumble to add impact. The sound design is closely intergraded with the music score during the mixing process, paying attention to the transitions between dialogue, ambience, and music score. The sound design choices and final mix of sequences intend to heighten the contrast between those elements within scenes for the development of the storyline. 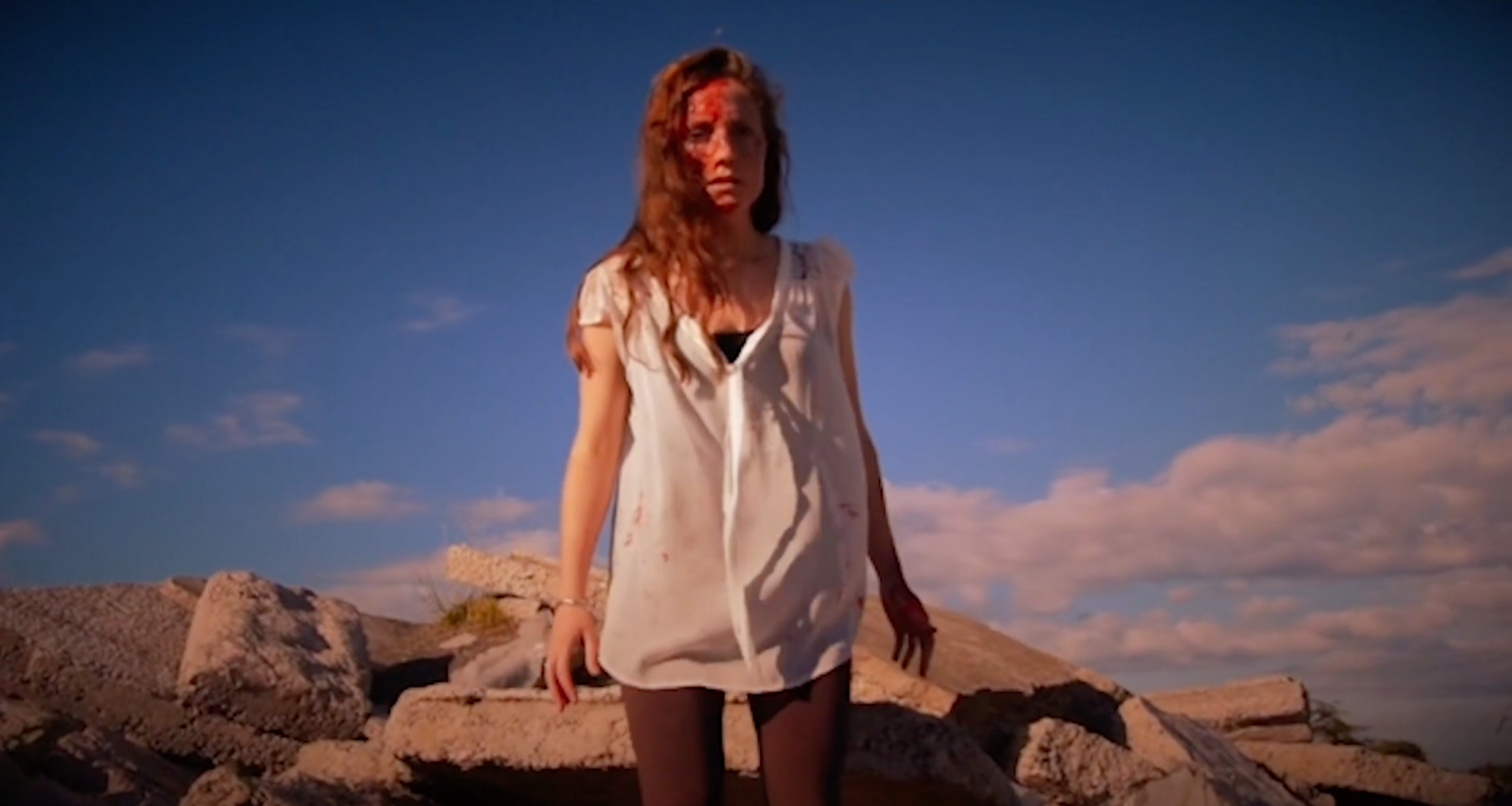 The Television Advert, from Mazda A Driver’s Life, is a car advert showcasing the growing life of a driver in various stages of his life, from teenage years to his 50s, and his selection of cars suitable for the needs in every life stage, with focus on the freedom of the personal choice of the car that gives the character happy emotions and memories.

The script of the voice over features a poem, accompanying the action on screen, and delivered in sync with the image, with the emotional connotations of the content of the moving image. The music accompanying both the visual and script, enhances the emotions and sensations, of the main character in action, aiming for nostalgic, positive, adventurous and happy moments within the life of the driver. The advert aims to convince and target the audience of male, middle class, from their 20s to 50s, that a car is part of the happy memories and needs for their living. The voice-over has been recorded, edited and processed in Pro Tools in a technically compliant mix for Radio and Television Broadcast. 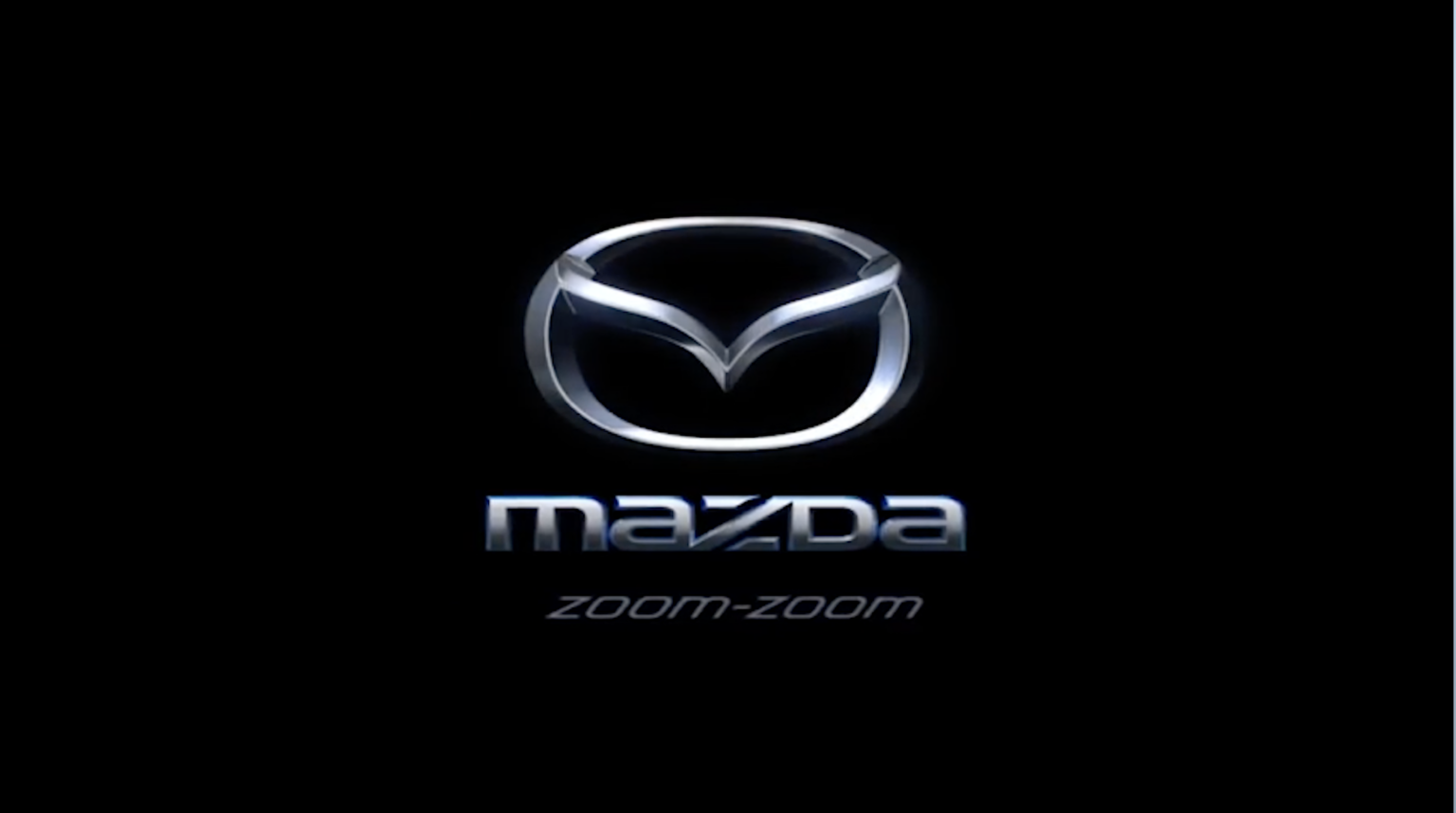