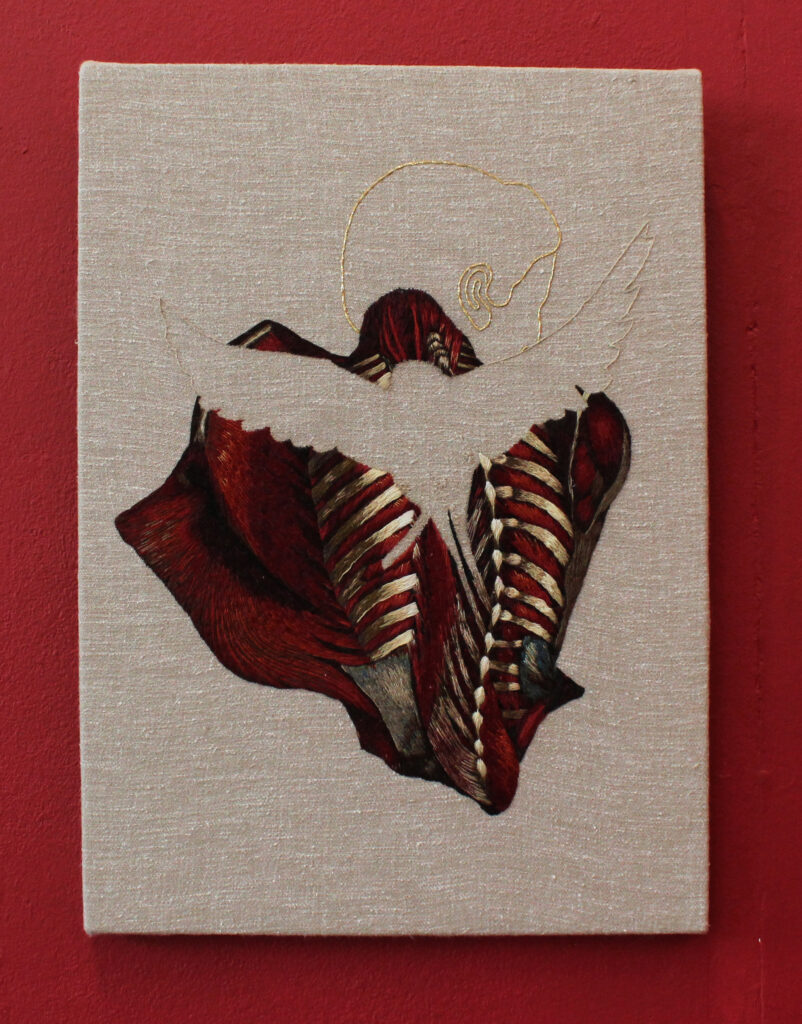 I’d rather be at home, making things.

I cannot remember saying this, but I am told I did once, as a child struggling in a blustery Scottish wind along the seafront. Years later, it remains true. I move through the raw cold world in life autistic, and although my definition of home has changed, I still would always rather be there, making things.

I wrestle with what I get from making. Is it the comfort of repetition, the quiet of solitude? Perhaps the egoistic catharsis of making visible the images I hold inside, the sense of purpose lent by creating under an economic system which demands production, or a sense of control – I have the blank canvas and the power to turn it into whatever I want.

I choose to embroider (a dense, repetitive, silent craft) because I find physical and psychological meaning in doing the same thing over and over, starting from a single thread and building it, cobweb like, into something new. Using a very precise, time-consuming skill which has passed down through generations of makers is a devalued type of labour in the hyper-consumerism of the 21st century, a capitalist economic and social structure which finds my queer autistic body incapable, inutile, unworthy. By embroidering, I assert my existence, I question cultural notions of value and progress and explore ways to flow through a society into which I will never neatly fit.

I find common threads running through history and follow them through the kinds of stories which have inscribed truths, blustery binaries which buffet us back and forth, describing us as good or evil, man or woman, worthy or useless, mad or sane, ill or well, belonging or outcast … and fear, always lurking, of contamination between the two sides. In order to engage with this fearful myth-making, I too become a storyteller. I research widely and thoroughly for stories to tell (finding particular meaning in queer and post-colonial writings, ancient and religious mythology, and Gothic literature), translate them into layered symbolic imagery, then pass them on again. This philosophical process is made visual in my recent embroideries: I use the image of the snake found in Doyle’s The Speckled band as a symbol to explore my place in post-colonial Britain today; I use the image of lavender to explore my queer body and anti-queer narratives; I use blood as a representation of flow, of contamination, of spiritual and physical boundaries. I layer images upon each other in palimpsest-like compositions, visually overwriting historical narratives to explore how they have been structured to create the mythic ‘truths’ held in the geographical, cultural, social place in which I live. The symbols are simple visual representations of complex historiographical structures, and thus they are flexible, shifting and changing. They are not didactic, but rather a visual framework through which I research and express the stories I want to tell.

In making I get a way to pin down a chaotic world and examine it, thread by thread, simultaneously building up a visual refuge into which I fit. In making things, I find home. 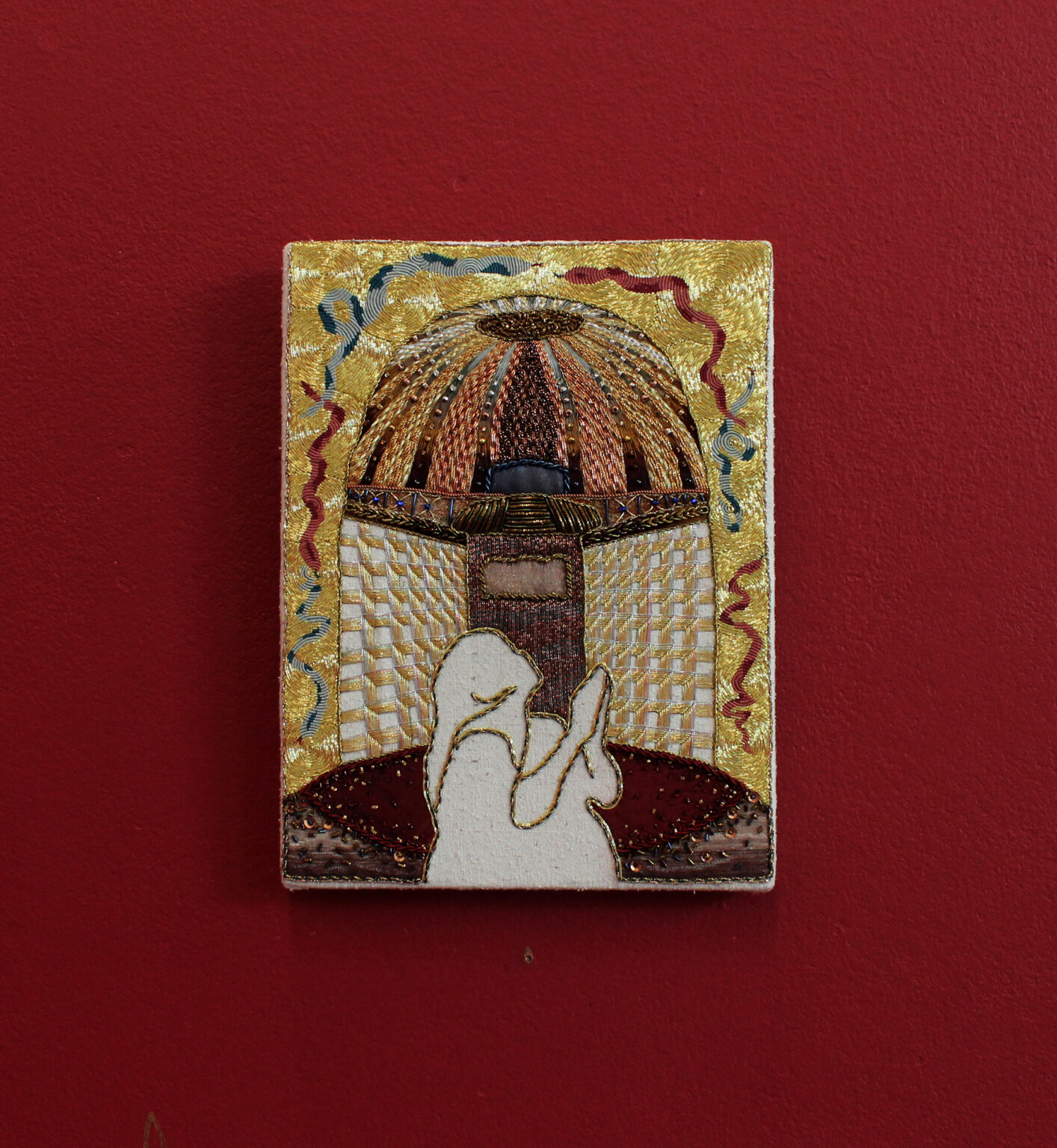 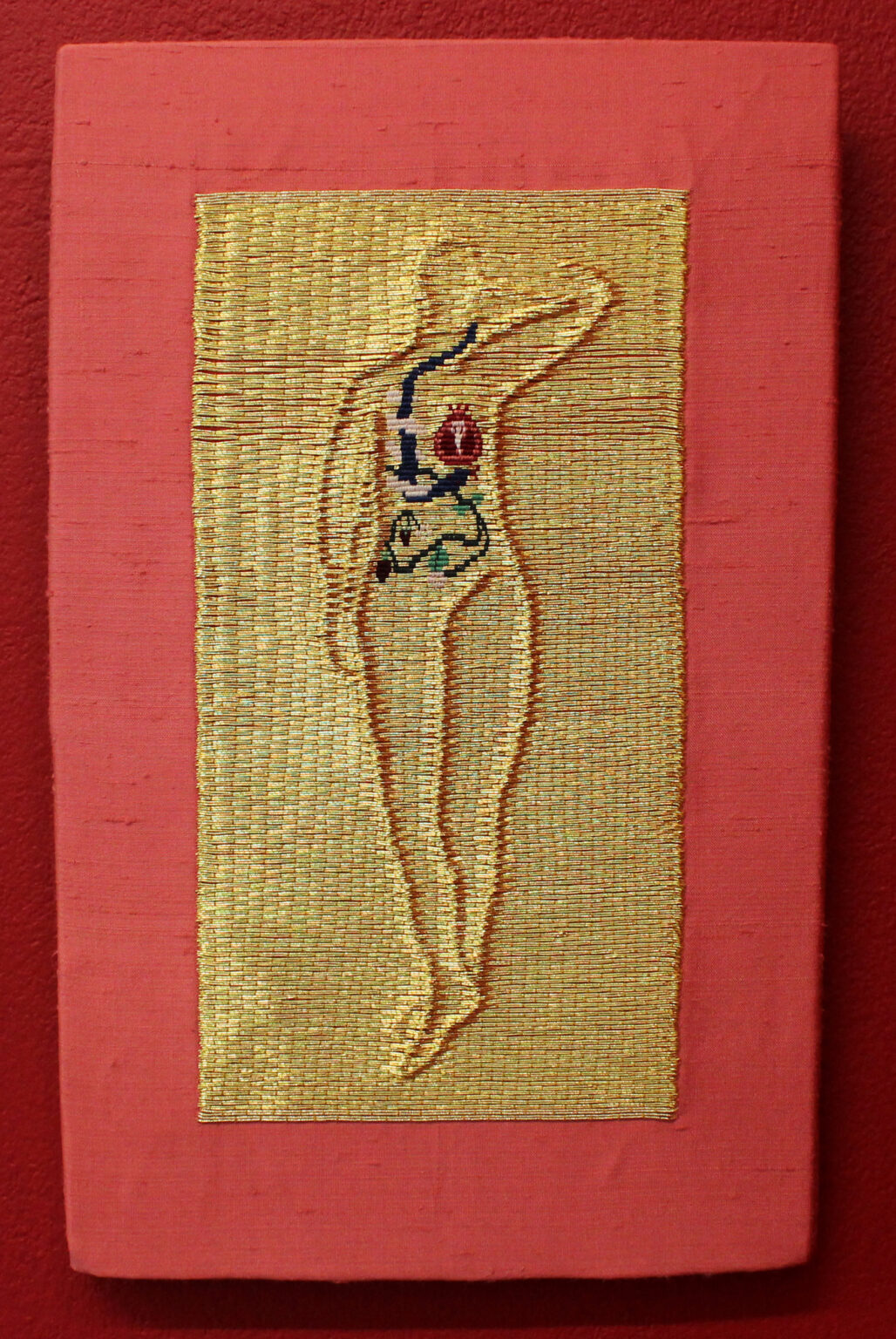 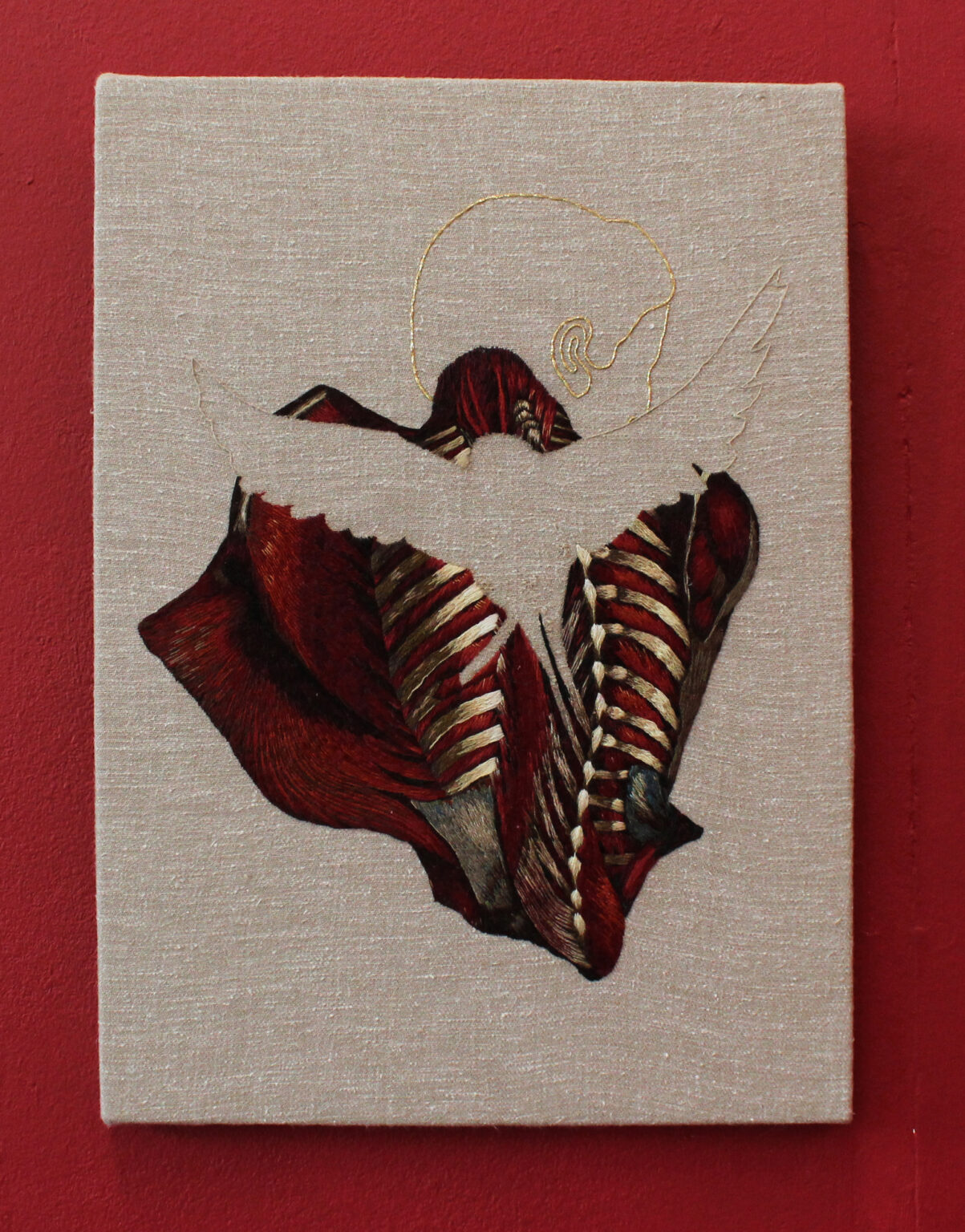 32 x 23 cm Embroidery
For Sale: Price on Request
1 of 4
Previous Next
Close

25 x 16 cm Goldwork embroidery
For Sale: Price on request
2 of 4
Previous Next
Close 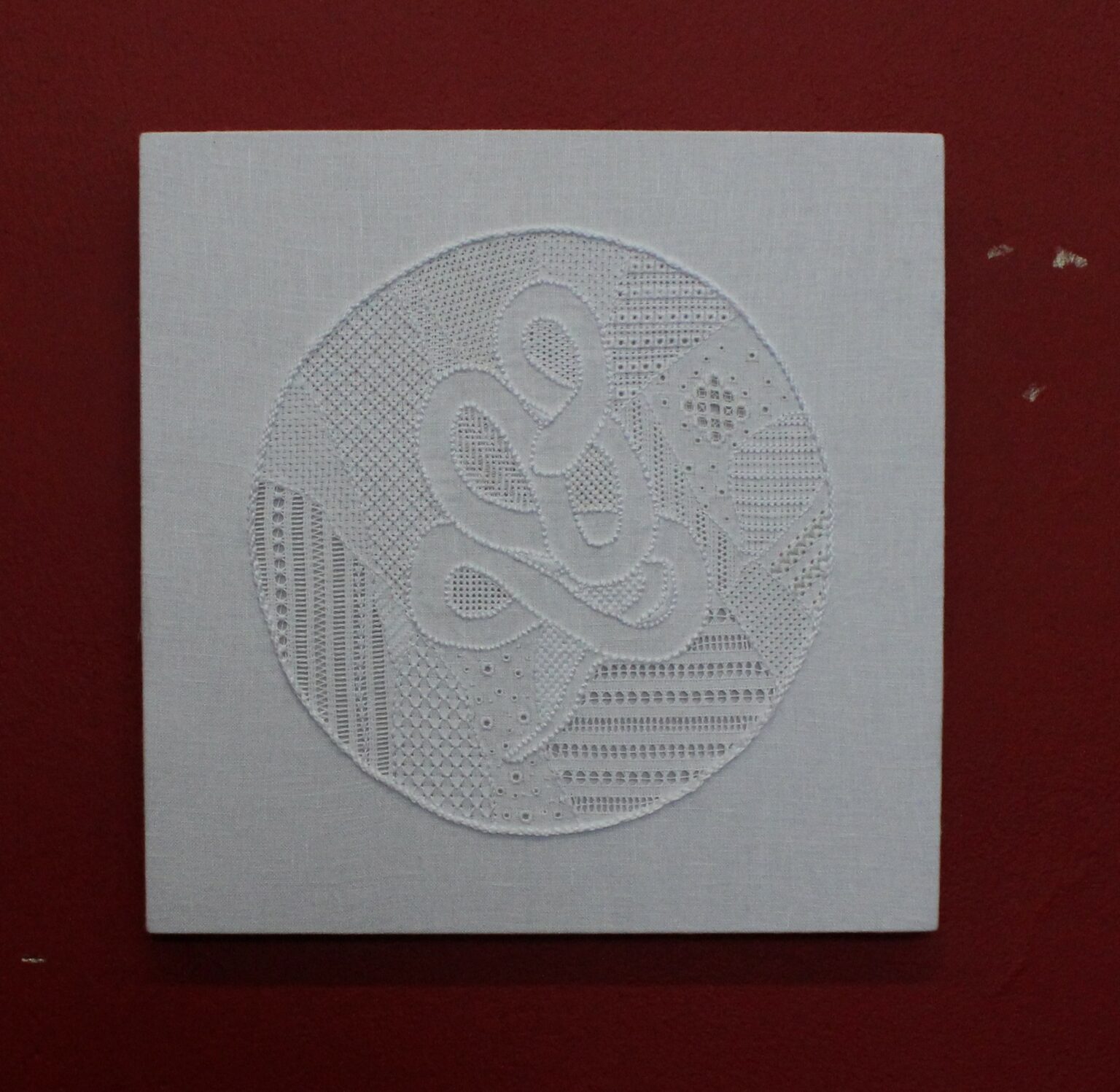 26 x 26 cm Whitework embroidery
For Sale: Price on Request
3 of 4
Previous Next
Close

22.5 x 17 cm Goldwork embroidery
For Sale: Price on request
4 of 4
Previous Next
Close