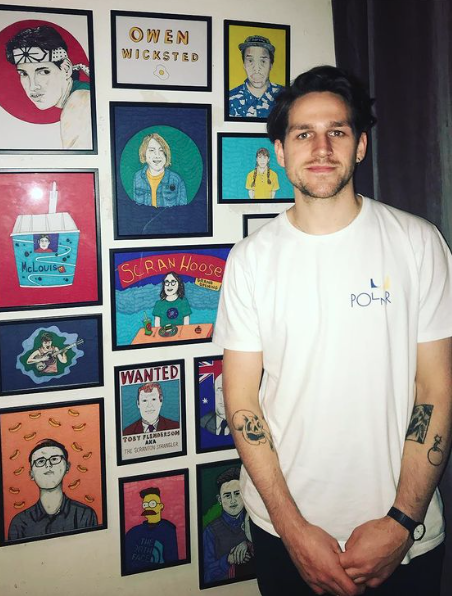 Owen Wicksted is a Scottish artist, musician and student working and performing within various disciplines. After achieving a HND in Sound Production from Forth Valley college in 2013, Owen took a break from education to enjoy life as a touring musician. A three year spell dedicated to his craft saw Owen record with and learn from seminal sound engineer Steve Albini in the midst of a hectic touring schedule across the UK, North America and Europe.

Coinciding with this creative pursuit, Owen built a portfolio of Illustrations, often working on commissions for bands and club nights, as well as being featured in exhibitions and zines around Glasgow. Inspired by the nostalgic innocence of Quentin Blake and the observational DIY approaches of Raymond Pettibon, Owen has developed a unique creative style across various mediums.

Throughout his time studying at GSA, Owen has developed a particular passion for sound design, film and analogue photography, specialising in the nuances of everyday life. Inspired by filmmakers and photographers such as Harmony Korine,  Lauren Tepfer and Jerry Hsu, Owen is especially interested in creatively exploring and capturing the mundane, forgotten landscapes that are being passed by in favour of artificial technological environments. An innocent and curious childlike outlook pushes Owen’s artistic narrative in a unique direction, focussing on the hidden gems of day to day life.

Throughout his final year, Owen has continued to develop his technological skillset through software such as ProTools and Final Cut Pro X, as well as showcasing his conceptual ideas and passion for creating by any means necessary. Growing up in a small town, Owen sometimes felt discouraged from expressing his individuality but he has continuously pushed against this mindset in order to explore his creative curiosity.

A short documentary about the history, and current state of Bangour, an abandoned village in West Lothian, Scotland.

A spatially aware sonic re-imagination of an outdoor UK music festival. Created from found sounds and featuring music from bands and artists I like. This piece was created in response to the longing I felt for not only the music, but the unique atmosphere at a music festival. Something I have missed greatly throughout the Coronavirus pandemic. Best experienced whilst wearing headphones for full spatial immersion.

A short film documenting the history of LA based alternative punk band, Thee Oh Sees. Inspired by music based documentaries, I wanted to delve deep into the history and nuances of a band I have great affection for.

A short film documenting the processes and concepts of film photography and suburban landscapes during the Coronavirus pandemic. This film explores the nuances of the everyday. Inspired by the concepts of street photography and skateboarding culture, I wanted to focus on how landscape can be perceived creatively, focussing on light, composition and visual texture.