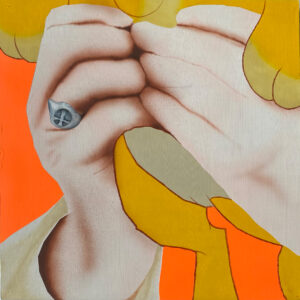 “Digital spaces have the tendency to overwhelm, so I’ll keep it #short and #sweet.” In one pithy sentence, Painting & Printmaking graduate Sophie Booth gets to the heart of the matter – online space may technically be limitless, but who really wants an infinite scroll? Booth is true to her word. Her contribution to this School of Fine Art undergraduate showcase is a minimal selection of work that wittily homes in on our digital/real lives through painting, animation and coding. Memes are a particular focus. One of her Micro Macro paintings – the source for which are tightly cropped details of these widely circulated internet staples – announces her showcase space. In the painting, a pair of white hands seem to be engulfed in something soft and yellow. A visit to Booth’s Instagram reveals the whole meme. Spoiler: it features Pope Francis and Simba from Disney’s The Lion King.

Booth’s work is playful but serious, interrogating an online world that is simultaneously ‘normal’ and seriously weird. It feels appropriately on the button as we feel our way forwards in this Covid-scarred moment. Unsurprisingly, the impact of the last year and everything it has done to our lives can be keenly felt in much of the work by the 106 students featured. Rather than medical masks and vaccines, though, it manifests itself through a strong sense of identities being explored and discovered, of memory, history, and how these powerful forces shape us in the present.

Ella Wright confronts the recent and ancient in her Mudlark series, inspired by “long walks following the Thames and the Clyde with no clear intention, drawing, writing and picking up objects as I go”. The resulting works combine clay and collage, porcelain and glaze, drawing and woodcarving – pieced together scenes that call to mind faded frescoes and Paleolithic cave art. There are other nods to past lives, heritage and family histories: Rowan Ormiston mines Scottish mythology, specifically the folklore figure of the Cailleach, a ‘divine hag’ described as the goddess of the cold and winds; Scott Pearce traces his family history back to a great great grandfather, a private in the Essex regiment who died in 1915 on board an army ship docked at a Greek island; Josie KO responds to a racist 16th century poem that documented the presence of an African woman in Scotland. KO’s multi-coloured sculptural installation, My Ladye with the Mekle Lippis, utilises community-sourced knitting, papier mache, and acrylic paint to celebrate Black womanhood in white society. 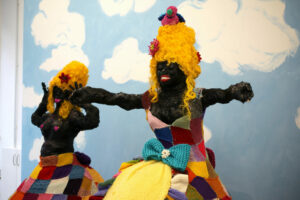 My Ladye with the Mekle Lippis – Josie KO, Painting and Printmaking

A sense of place, and of an individual’s relationship with the immediate community and wider society, is another recurring aspect of the students’ work. Samantha Clark combines both the personal and the world around her in a series of roaming photographic self-portraits shot on 35mm film. Literally placing herself in the picture with the help of a mirror, she tells a fleeting story of life in her home town, Middlesbrough. The richly characterful pictures mix intimacy and observation, like pre-digital selfies taken in a post-industrial landscape.

The spectre of Glasgow’s own manufacturing past is also present. Bella Hansard uses wasteland near the old Govan Dry Docks as a site for musical experimentation. Zylophones made from a nearby fallen tree are fixed between large rocks; a seven-minute video shows Hansard and others enthusiastically playing what is effectively a temporary public sculpture. “I will always acknowledge that my work will not be permanent,” explains Hansard. “It will just exist for a brief moment in time and, by no means, will have more value or purpose than any other aspect of the environment in which it is placed.”

Edie Preece’s Secretgroundsman project is a more permanent intervention in a different kind of Glasgow ‘wasteland’. Preece wants to “act on space in the city”, reviving neglected football pitches that have fallen into disrepair and disuse. They have documented their ongoing work to turn a former full-size blaes area into a working one-third pitch, to be used for practising corners, penalties and mini matches. They have even painted the original full-size goalposts white and added a goal net. Also recorded are the tools used for the work, presented in a 4-3-3 formation that includes a ladder, a shovel and a self-made pitch line marker. 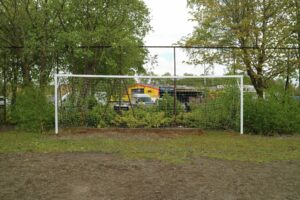 While Preece’s work is impactful, practical – as well as ideological – others engage with the city in more abstract and poetic ways. Nancy Collins’ films of the River Kelvin, shot on Super 8 and 16mm, are beautiful audio-visual collages of flowing water, all bubbling activity, shimmering sunlight and atmospheric shadows. Shot up-close to catch the movement and surface reflections, Collins films with a sharply attentive eye, as if observing and capturing the river’s moods. Sound – which she records separately and then adds in layers – is equally important here. Listening with eyes closed is an evocative, engrossing experience. “I always hope to emphasise connection and co-existence to the natural world,” she says. Mission accomplished.

There are plenty more interesting works presented across this digital showcase. Work like Molly Stubbs’ kinetic Canary Resuscitator sculpture, a scaled-up copy of a real machine from coal mining history; or Tilly Prentice-Middleton’s liminal bus stop, self-assembled from PVC poles; or Carlos Anguera Jover’s gently trippy video documentary exploring pop song structure and Silicon Valley capitalism. There’s a durational performance, too, which for 30 minutes sees Maya Rose Edwards repeatedly using a pedestrian crossing on a busy Glasgow road. In fact all this art could get a bit overwhelming. Best then to keep this #short and #sweet.

Chris Sharratt is a freelance writer and editor based in Glasgow. He writes about contemporary art and culture and is a contributor to, amongst other publications, frieze, Art Agenda, Art Review, Art Quarterly, Art & Education, Sculpture Magazine, TateEtc, a-n, and Arts Professional. He has also had articles published by The Guardian, New Statesman, The Sunday Times and many others.