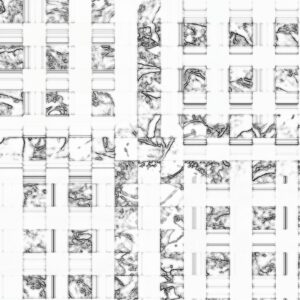 Viewing The Glasgow School of Art’s 2021 Showcase through YouTube clips and virtual reality glasses fashioned from cardboard and sellotape was, I’m sure, not how it was supposed to be. But here we are, and 24 students – 13 from the school’s Sound for the Moving Image department, 11 from Interaction Design course – host their works in virtual galleries, where real world, soundmapped installations are constrained to headphones.

Naturally, some of the works act as reminders of what has been both missed and cherished over the past year. Natured Sounds, from Angus Hamilton, is a self-described ‘attempt to fuse nature and humans’. Spurred on by a fixation with nature becoming a coping mechanism throughout the various lockdowns of 2020 and 2021, the 20-minute work broods with Kraftwerk-esque analogue synthesiser bleeps make way for metallic shimmers of expansive, jarring sound.

There’s yearning for simple pleasures with Tinnies from Craig Hawthorne, who uses recorded sounds of clattering beer bottles and fizzing freshly cracked cans to create a track that resembles drunk footwork. Hawthorne’s separate work, Pulse, feels like an ode to a clubbing year lost, where through an interface the user can change song elements with their heartbeat alone.

Rather than yearn for indoor spaces of collective euphoria and beer brand sponsored mass gatherings, some works take refuge in the everyday. Data collected from balconies and on sunrise and sunset walks through Glasgow is transformed into harmonies that echo the sun’s 12 hour cycle on Lambert Segura’s Quiet Sand Suffer, while the electronic experimentations of Ruari Green, whose music productions heavily lean on regenerative procedures, grow and evolve like a blooming plant. 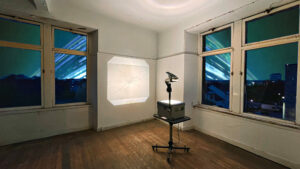 By his own admission, Owen Wicksted finds intrigue in what is, on the surface, uninteresting. There are scenes of greyed and decaying buildings in Bangour, a documentary filmed in the abandoned Scottish town of the same name, and uses found sound to create a virtual festival on Binaural Festival Soundscape, a mix of mundanity and the simple pleasures of getting sunburned at a festival stage.

There are moments of exploration. SoundScapes, by Liam Scott, who uses found sound recorded on Amazon trails by Scott to place the listener inside this rapidly depleting ecosystem. There are afternoons spent in Grangemouth with Ryan Brooks and his audial landscape to find convenient escapism in local parks. Panoraia Vitali’s spatial audio installation Windchime, meanwhile, floats and flitters like the summer breeze of Vitali’s birth country of Greece.

But many works gleefully forfeit the real, tangible world for entirely virtual ones. There are richly textured sceneries formed by databases on Denizali Onal’s Blended Landscapes, and Rebekah Brown created the hot pink plains of Candyland, a virtual wonderland built from towering lollipops and bubblegum machines that implores visitors to Instagram every drop of joy from it. Through three collective works – Different Place, Inside Abstract and The Dream of Waking Up – Kleo McNeill transports the viewer a thousand metres above the ground, then inside a painting and finally makes them reflect on how social media algorithms distort our understanding of the world beyond a screen. 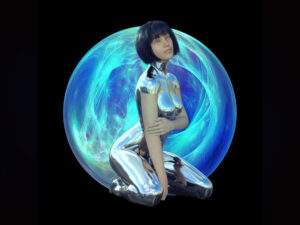 Innes White’s I May Lack Identity, But I Have Wonderful Teeth is a fairground ride that portrays the deep existential dread that is intrinsic to being young in 2021. The viewer is trapped in a virtual reality carriage as it drifts through a house of horrors of modern status and perceived success as defined by empty wine bottles and middling jobs in new media companies.

An altogether different experience is found in when life gives you lemons, from Kelsey Jones. A monologue written by Jones is read over an original piano and string score as images that represent conflicting emotions appear on the screen, where confessions of blame, guilt and destruction make way for images of dogs and guinea pigs. Ben Deans’ frank COLAJ, meanwhile, is formed of seven conversations played over one another. It’s an intentionally overwhelming, at times chaotic soundscape that portrays how the artist understands the world having been diagnosed with the condition last year.

Similar themes of neurodivergent disorders, and living with them, feature in Peter Billingham’s Heaven Into Hell and Horror Mansion, two works that portray very real feelings of anxiety and dread. Ashley West’s collection of works, meanwhile, is an exploration of nostalgia in its conflicting forms, from nights spent doodling on Windows 95 computers (FM Paint) to deteriorating VHS tapes from family holidays and reminders of loss (A Memory Tape for Dad). The result is a touching and endearing collection, both a celebration of youth and the fraying memories that come with age.

I then delve into Chloé Lefort’s work, where changing narratives in film are a key motivation. Discord recodes the 2014 film Birdman using the open-source software Processing to produce an entirely different narrative, while Discontinuity reimagines the cinema experience itself, where randomly generated clips play not on a rectangular screen, but an encapsulating circular projection. 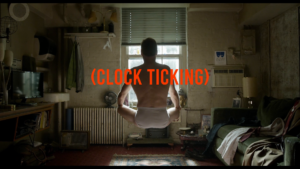 Ron Mackay finds inspiration in the neon-tinged, sci-fi universe of 2001: A Space Odyssey with his work Odyssey, reimagining the classic Stanley Kubrick film through modern technologies. Procedurally generated micropolyphony sounds, a technique where multiple lines play simultaneously to mangled and misconstrue the overall sound, play over visceral flashes of light.

Rebecca McSherry’s short film Voyage shares some traits with Mackay’s work, notably the isolation and claustrophobia that are synonymous with the sci-fi genre and particularly films like 2001 and Alien. On Voyage, McSherry trains a machine learning programme using a database of corridors that appear in various films to generate mutating and surreal sets from movies that never were.

Many works in this year’s Showcase ask, what are the possibilities, limitations and boundaries between human and mechanical life as the two become evermore intertwined? What if machines have the ability to feel, ponders Amber Struthers in Teaching Machines Intimacy. Struthers translates human touch through textiles into a language understood by computers, a lesson in intimacy for metal bodies.

Marta Palacz wonders if they can be mindful, adopting machine learning techniques to imagine yoga poses that no human would be able to achieve. It’s a work that pits machines not as dystopia fodder, but almost humanistic, even playful in nature. Delving further into the exhibition, Fabio Paiva explores the everpresent aura of surveillance and the blurring of boundaries by CCTV from his front window with Persuasive System, and Fraser Nangle creates an organism that grows and evolves like neurons firing in the human brain, asking ‘is human civilization built like an integrated system?’

Finally, ‘My heart leaps for you as you hug me tight’ reads the opening line of a robot-written monologue in Ailsa Brock’s Word Radiolaria. Generative artworks that resemble vegetal designs and coral reefs are created from these words. They are natural images created by unnatural means and in an unnatural time. But the Showcase collectively finds solace in both fictional worlds and normal towns, in mindfulness and grainy tapes and humans and machines. And, for this year at least, I do the same through cardboard glasses. 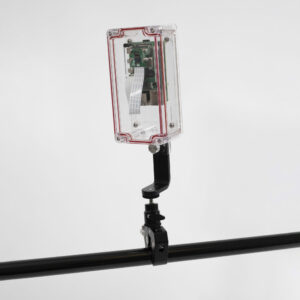