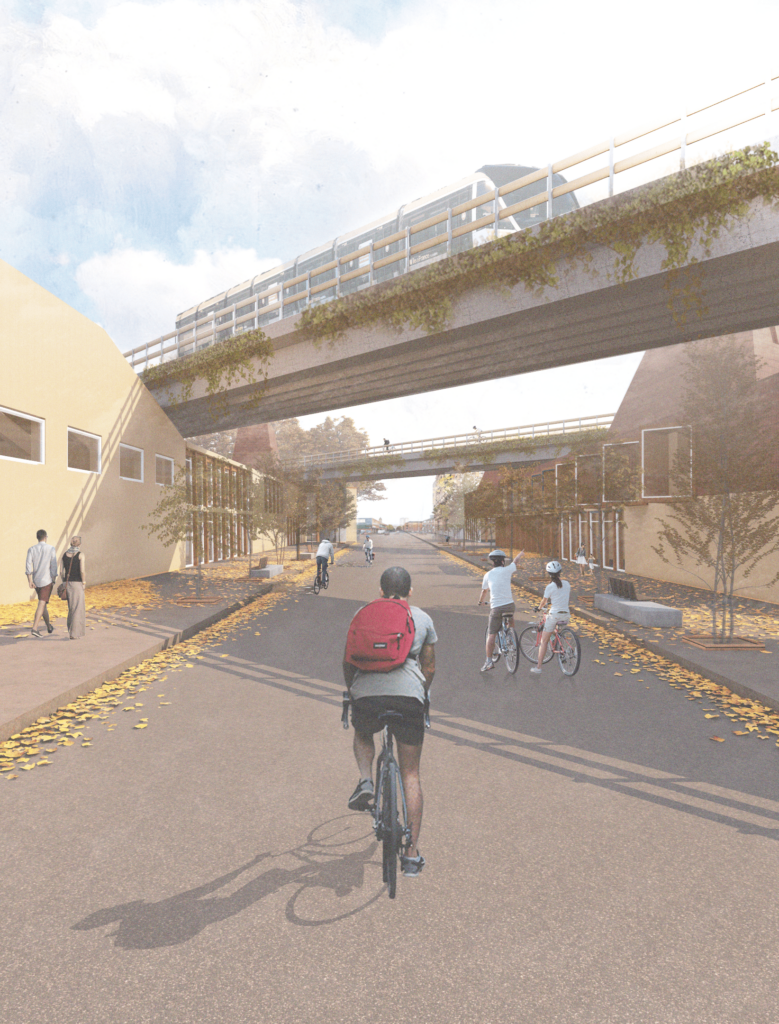 Motorways such as the M8 throughout the 21st century have been realised as a concept which is so far removed from the demands and the pleasures of many people’s everyday life. The social hierarchy it has created, particularly in cases like the Woodside junction prioritises convenience of travel and the demands of our fast-paced lives before quality of life and our own physical/mental health. At its core however, motorways are nothing but the concrete which facilitates it. It is a concept which is out of date and the scars in our communities are still being felt to this day.

More pressingly than the architectural implications of the M8 infrastructure however are the 100’000 cars which occupy the Woodside junction every day. In an environment which is battling to save our planet and in a city which has recently hosted the Cop26 meetings, our narrowminded commitment to the car is laughable and the perfect example of why we as a race are on this dangerous environmental trajectory. The need for drastic measures is now and not only Glasgow will benefit but the World will too.

In the wake of this climate emergency, it is vital that the decision we take, for however radical they may be, must be taken responsibly with not only to our climatic duties but also our role in creating urban environments tailored to the needs of the people and their right to comfort and access. As such, changes must be implemented to the M8 in order to create a more liveable and eco-friendlier environment at the Woodside junction. This will in turn inform the conditions in which a new inclusive social environment can be created and how this will go on to construct a new urban grain. The area of the Woodside Junction, which has different educational facilities surrounding it, also inhabits many different people groups and ages who are susceptible to different side effects from pollution and Co2 which makes the Woodside area one of the most polluted areas of Glasgow. 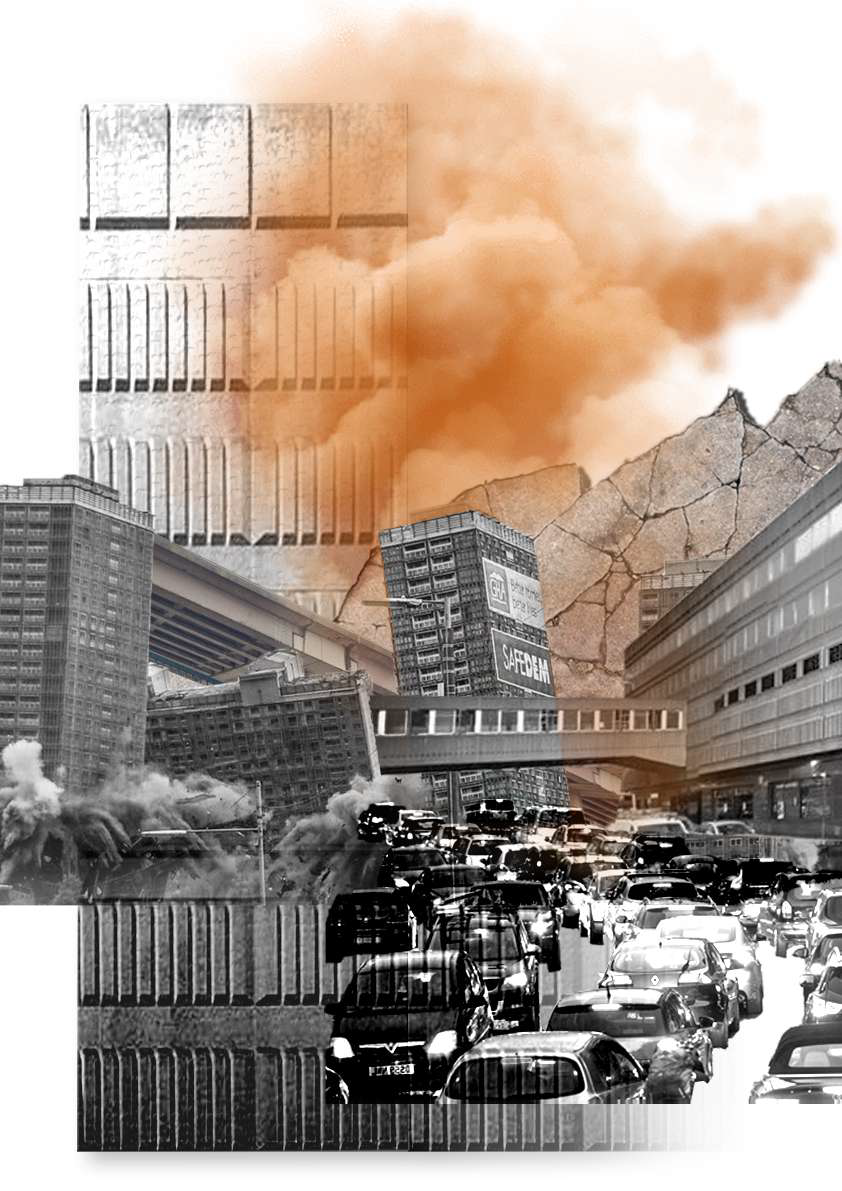 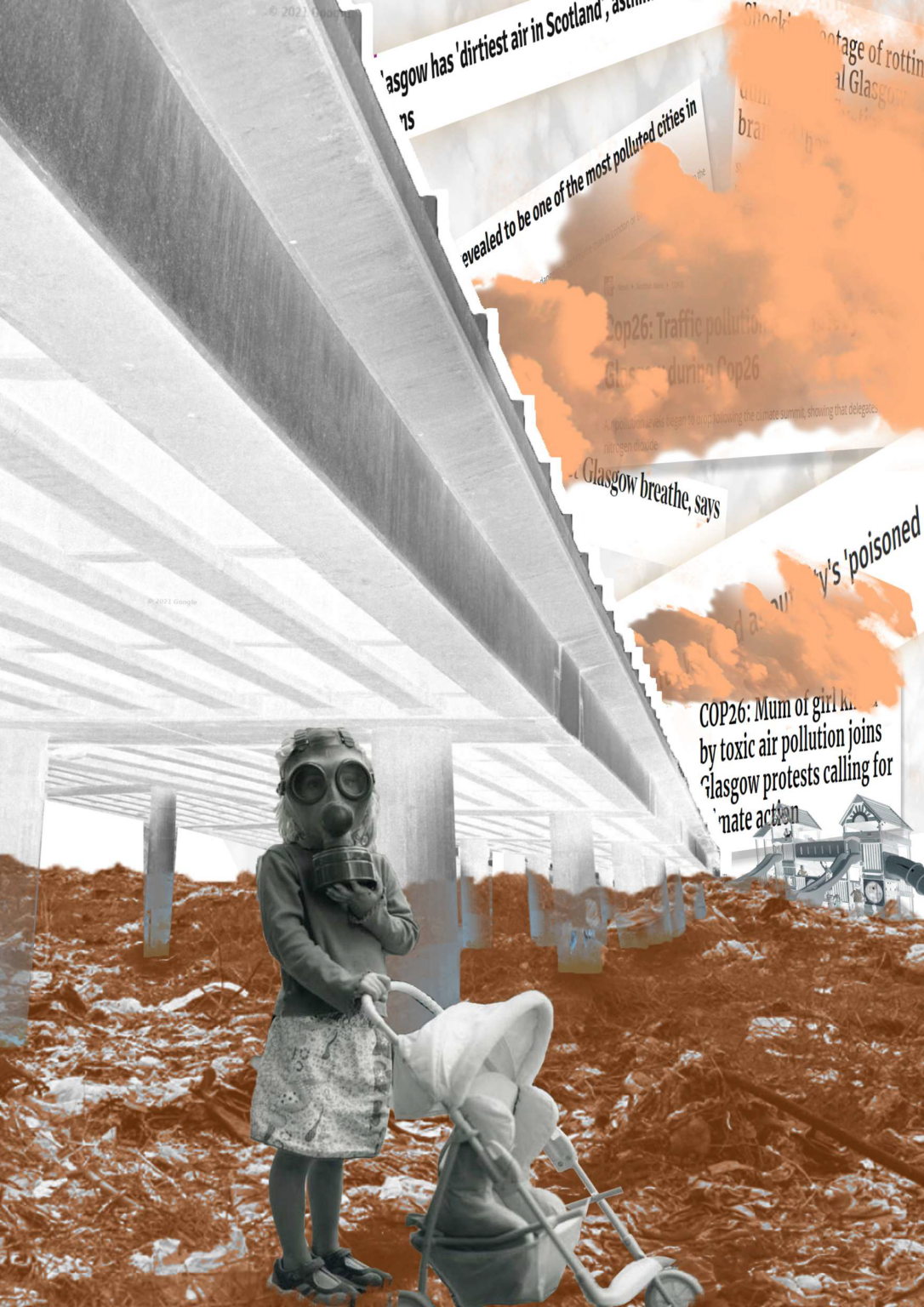 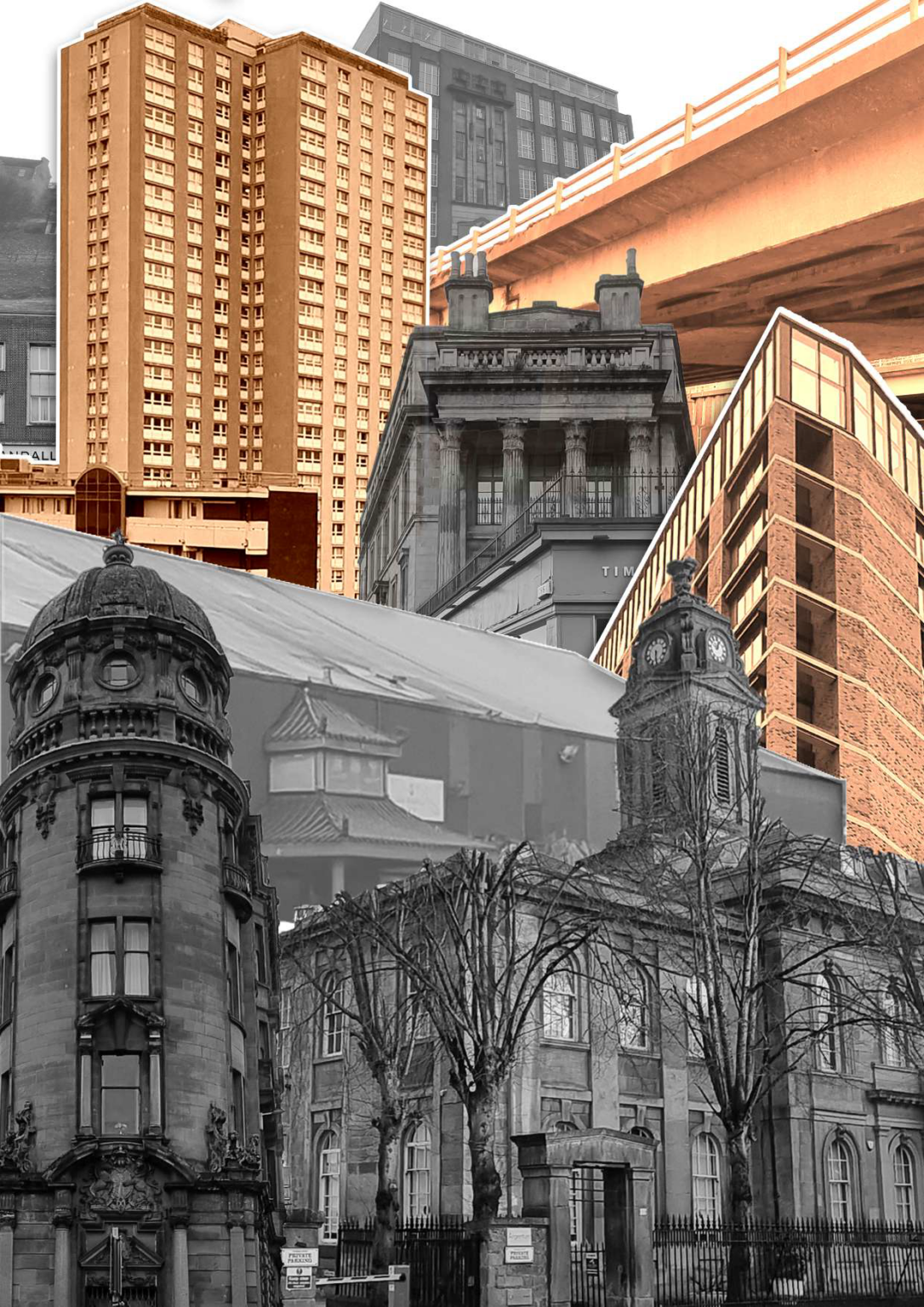 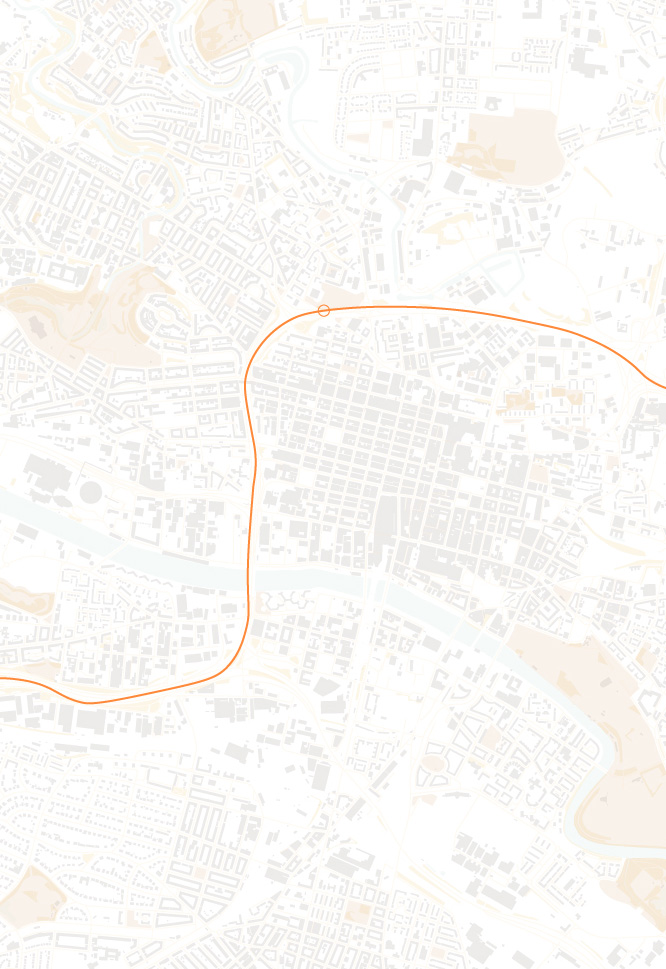 Map of M8 in Glasgow

The M8 which runs directly through the Glasgow City Centre effectively splits the West End and the City Centre into two different distinct areas, with few meaningful routes between. Glasgow has several conflicting moments in its urban realm, particularly in relation to its dense vehicular routes influencing architetural form and resulting in areas which are uninhabitable given the noise, vibration, lighting and material conditions.
5 of 34
Previous Next
Close 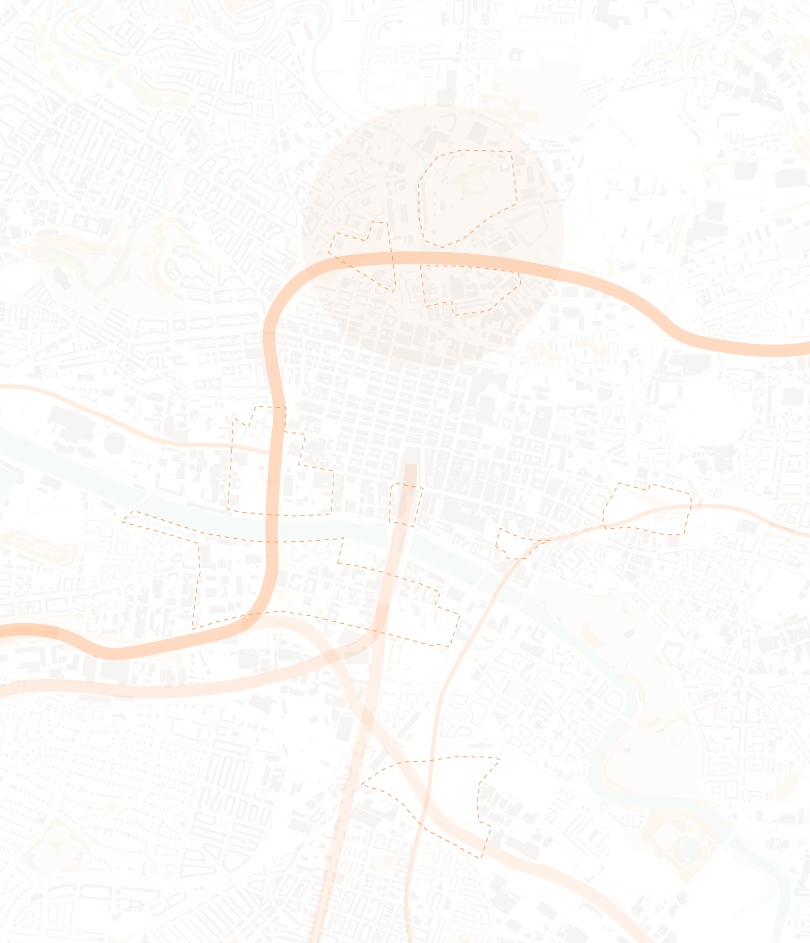 Several areas were highlighted as areas with little intervention as a direct result of the vehicular routes surrounding them. Going forward, the Woodside area has been deemed as the key area to focus in on given the prominance of the M8 in Glasgow town planning and the areas poor environmental and urban conditions.
6 of 34
Previous Next
Close

The current New City Road sits inbetween 4 distinct communities of Glasgow, Garnethill (South), Cowcaddens (East), Woodlands (West), and Woodside (North). This makes New City Road an important junction between the different communities which currently have a significant lack of community spaces along with little reasons to cross between communities.
7 of 34
Previous Next
Close 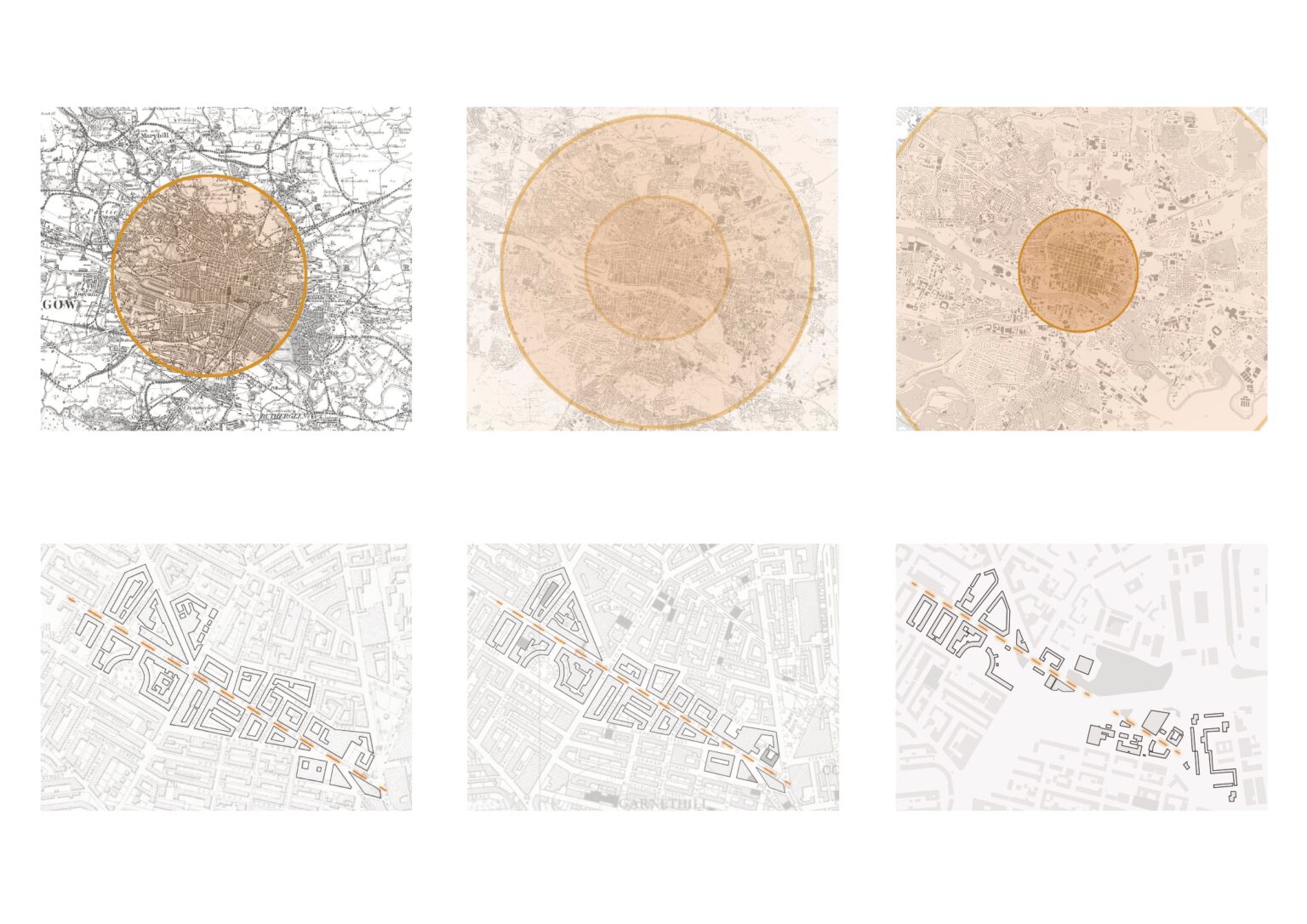 Changes in Glasgow and New City Road throughout History

This pattern which has been photographed and explored is unique to the Woodside Junction and features an interesting pattern of main structural concrete beams with steel rebar inside and concrete support girders. This makes for an interesting criss cross base to the motorway which is unique to New City Road. The conditions surrounding New City Road are such that the M8 and this pattern cannot be enjoyed or celebrated given the poor light, air and sound conditions on the site.
9 of 34
Previous Next
Close The site highlighted can potentailly create an interesting proposal for an education building which not only provides a new place for development of youth but also a visual and physical connection between early stages of development and further education. This also can create an interesting space where new transport routes along the M8 can bring students and children from all around the city to have easy access to quality educational services. This visual site image generated here best illustrates the overalapping of different programmes examined so far and where the connections can be made.
11 of 34
Previous Next
Close 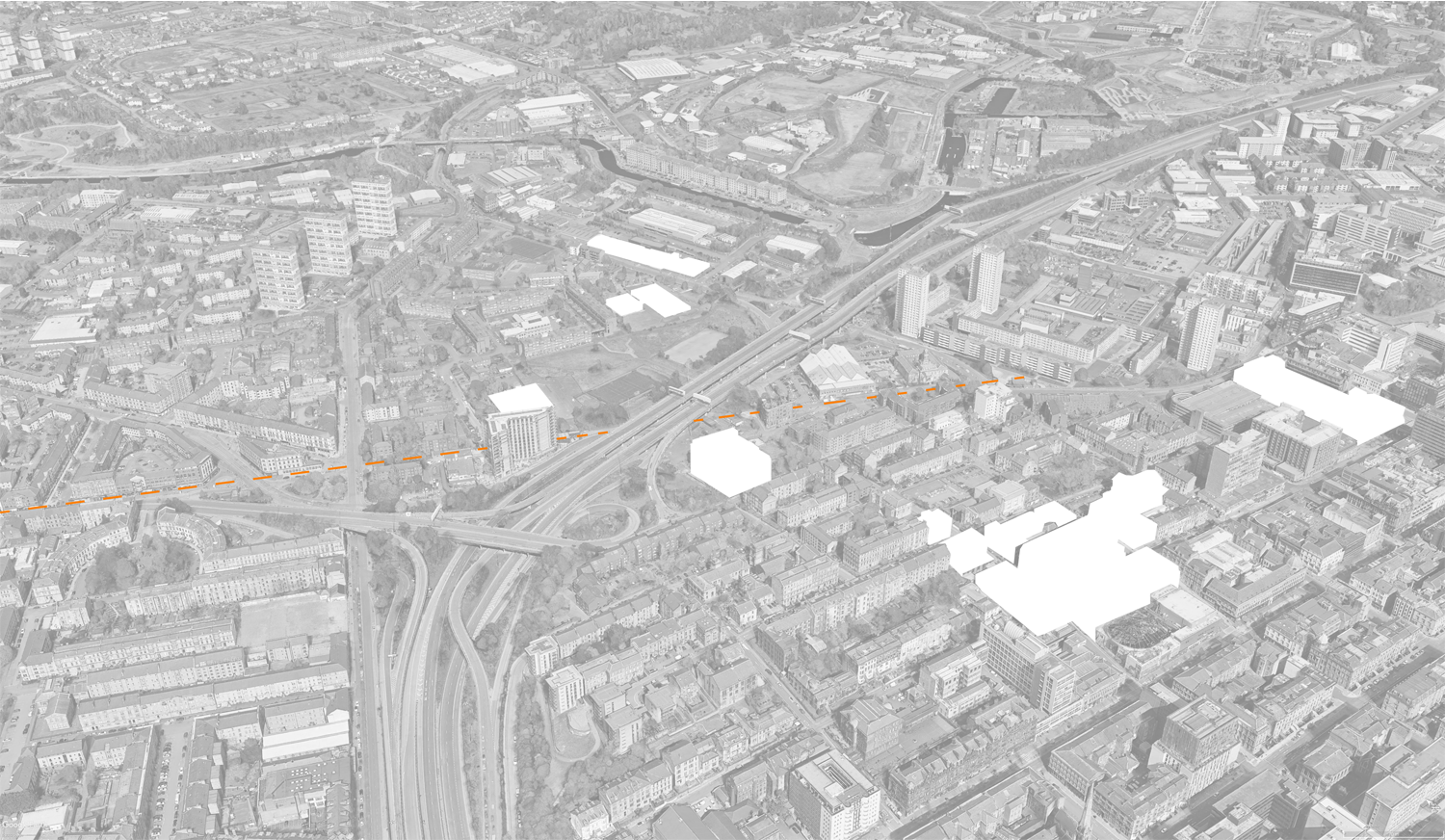 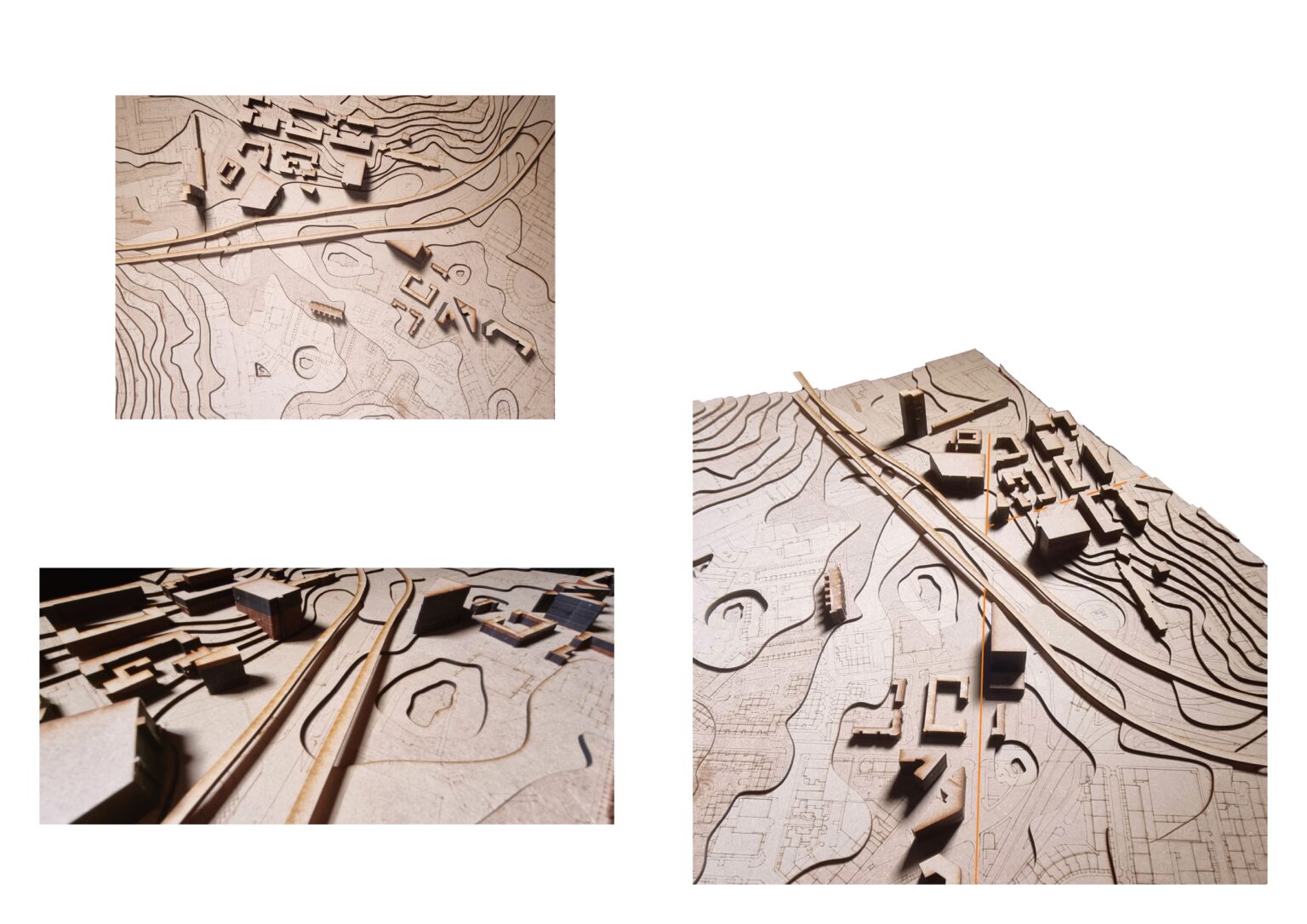 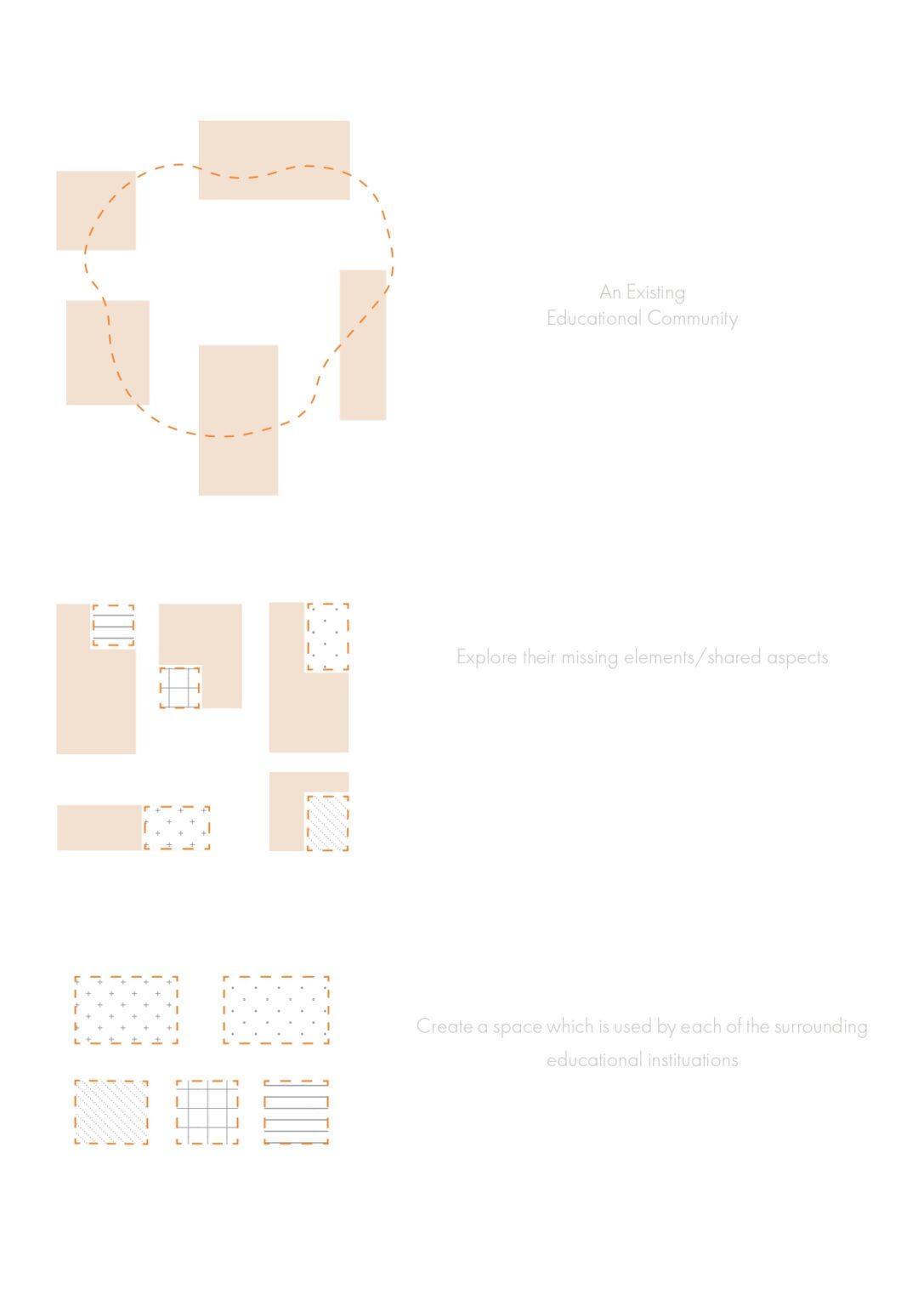 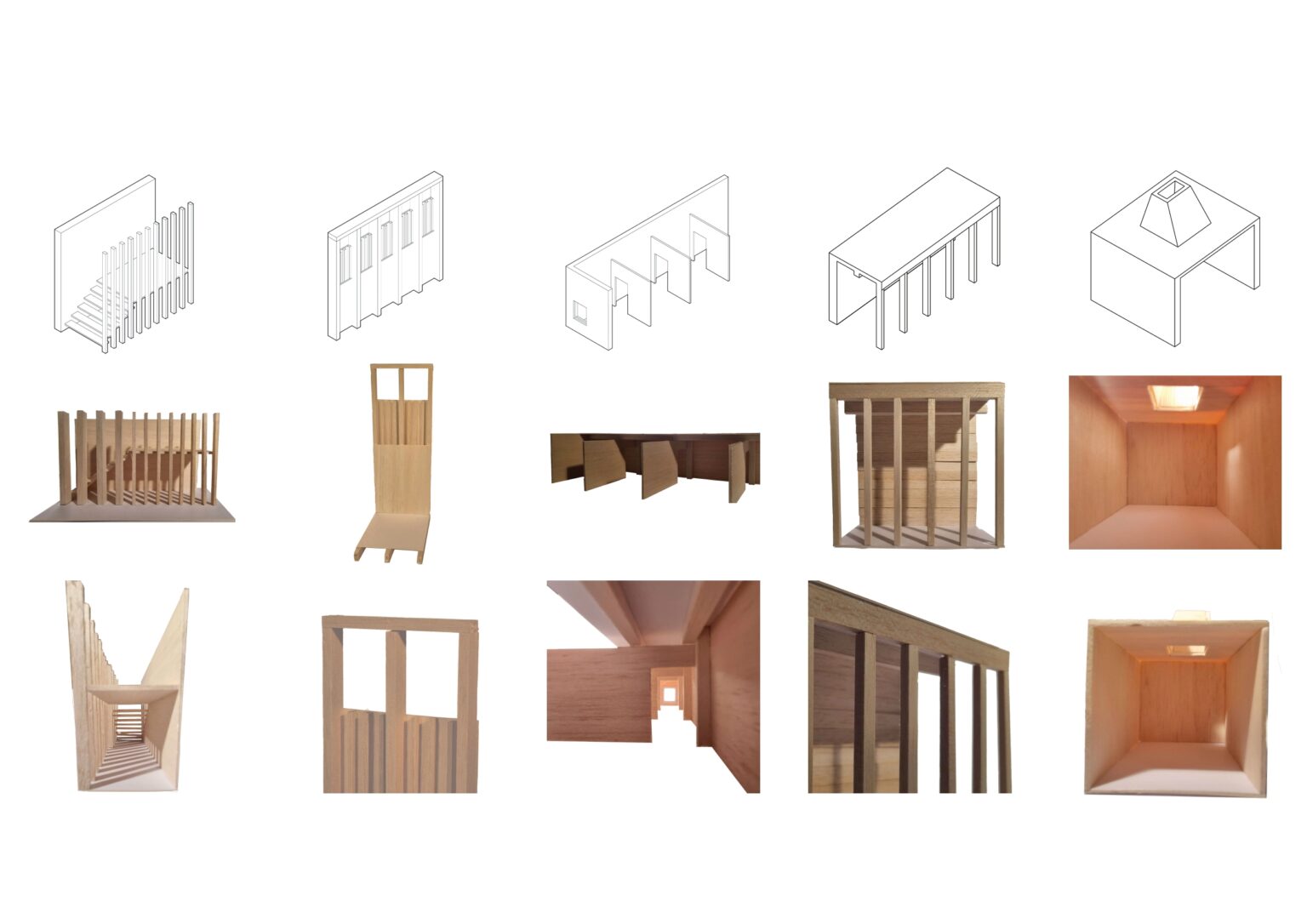 These models and drawings show different architectural investigations in which I used material, lighting and transition to evoke strong feeling and conneciton with the architeture. Particular elements were used to explore how material can inform how we dictate which spaces to move through or enjoy whilst also exploring materiality and scale.
16 of 34
Previous Next
Close 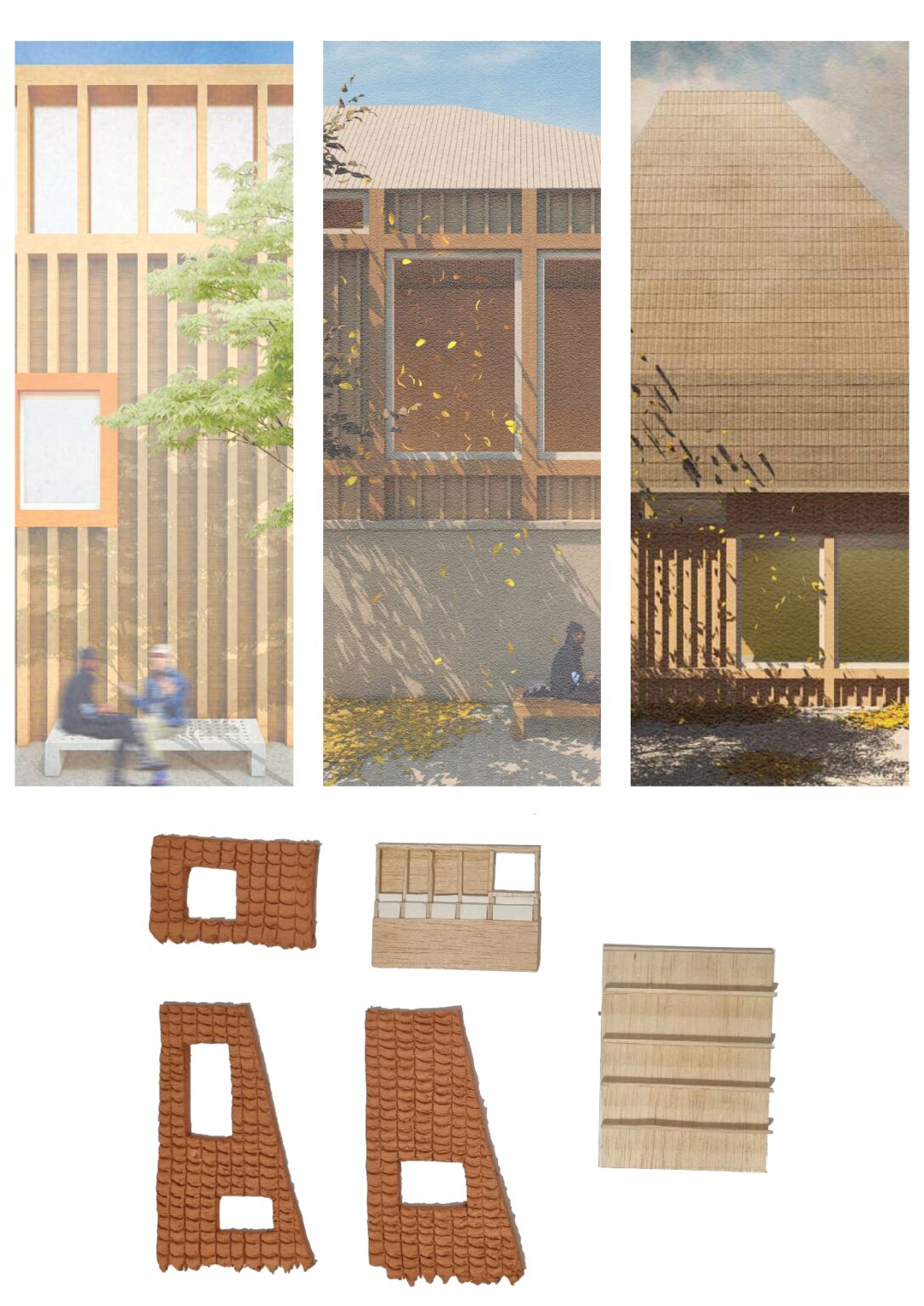 The materials investigated and tested in the intial stages was mostly timber given its structural strength and environmental properties. This then transitioned to testing the concrete from the demolished motorway lanes to repurpose it as part of the architectural facade. Further research and consideration however suggested that the concrete wouldnt be strong enough. This however can be reused at the foundation level. Slate tiles were chosen both as a facade and roof solution given its acoustic and reusable properties whilst also being readily available and locally sourced. Given the environmentally friendly nature of the design, it was important that the materials should be locally sourced in order to ensure there were as little emissions as possible in the construction and transportation process.
17 of 34
Previous Next
Close 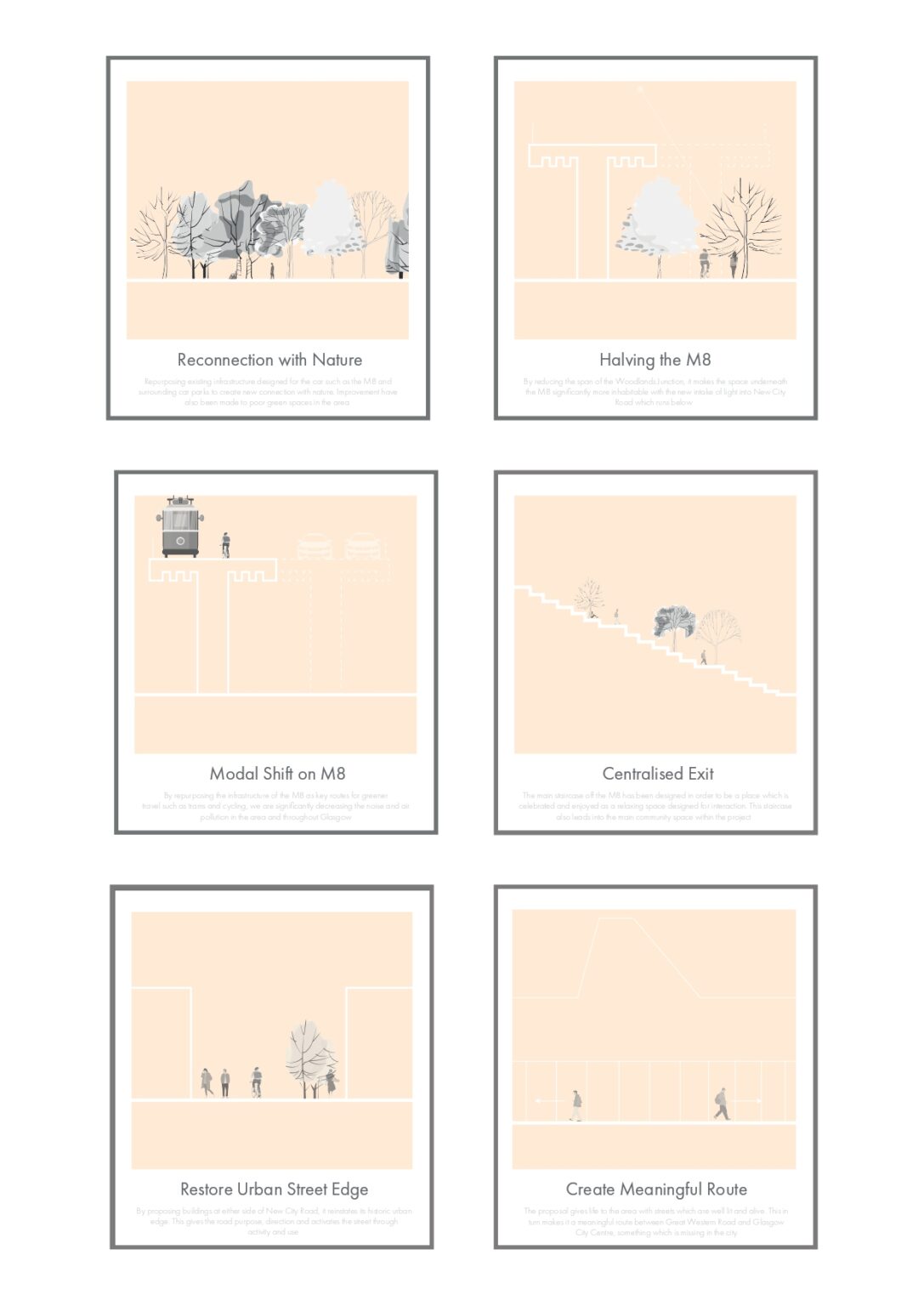 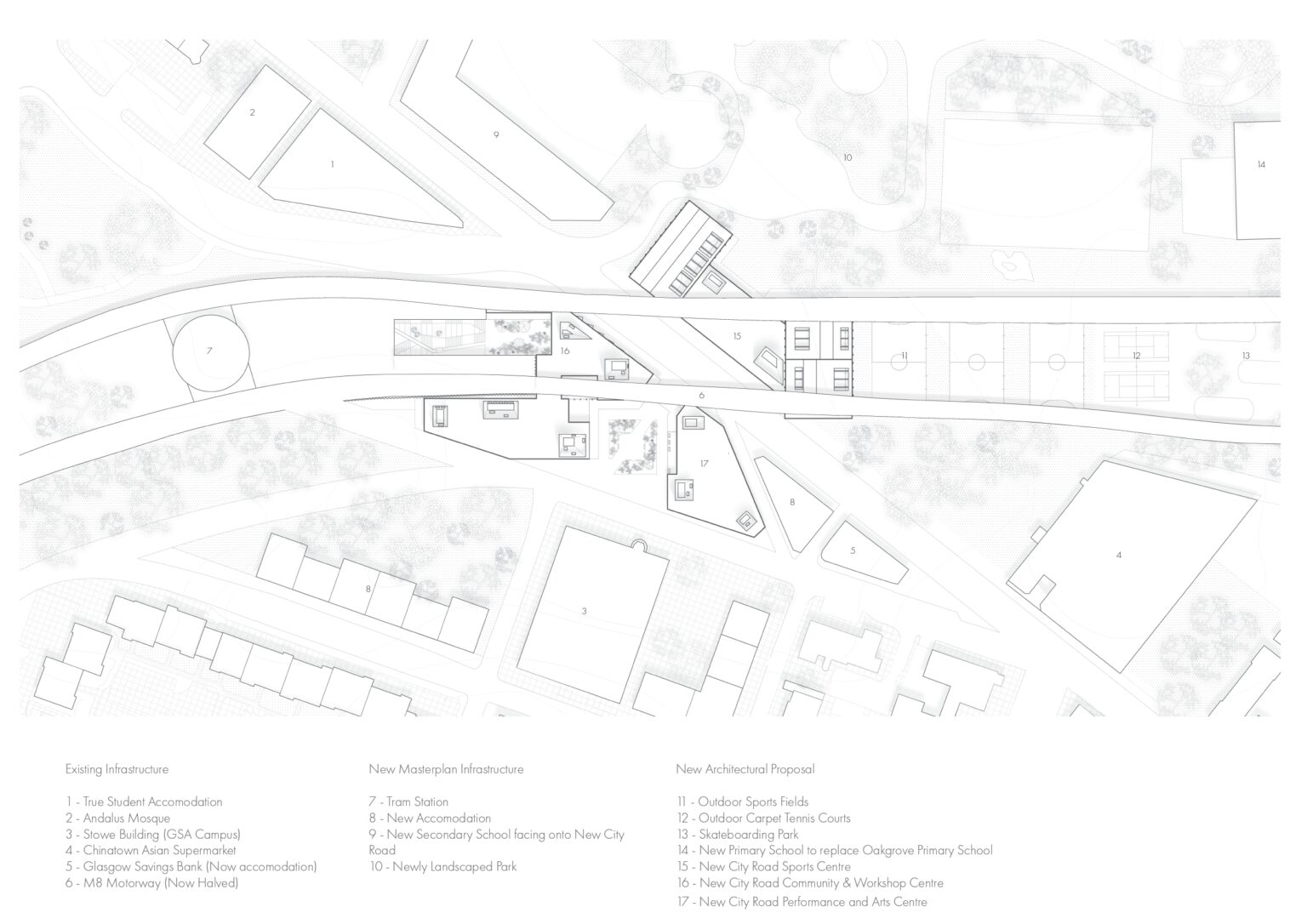 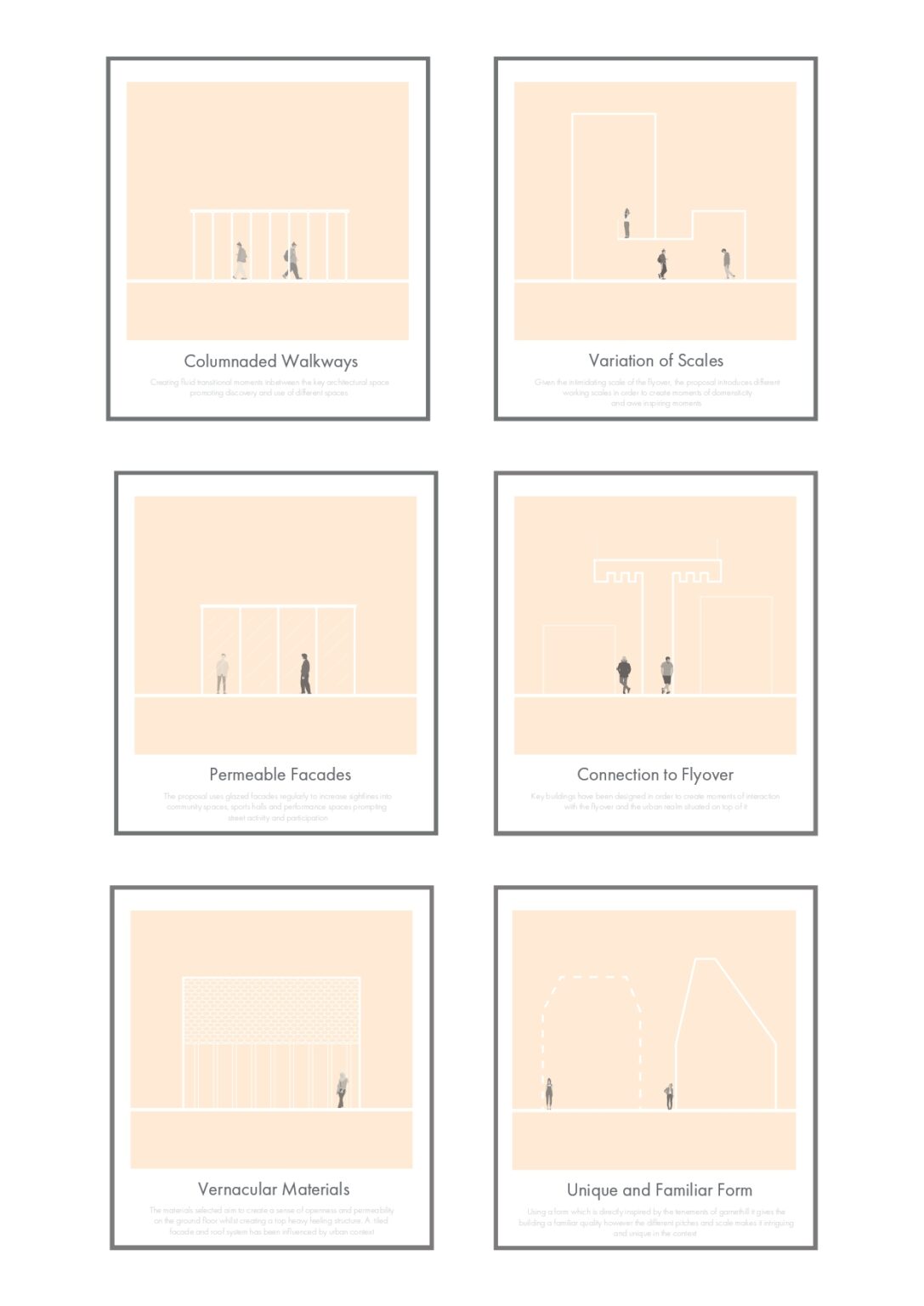 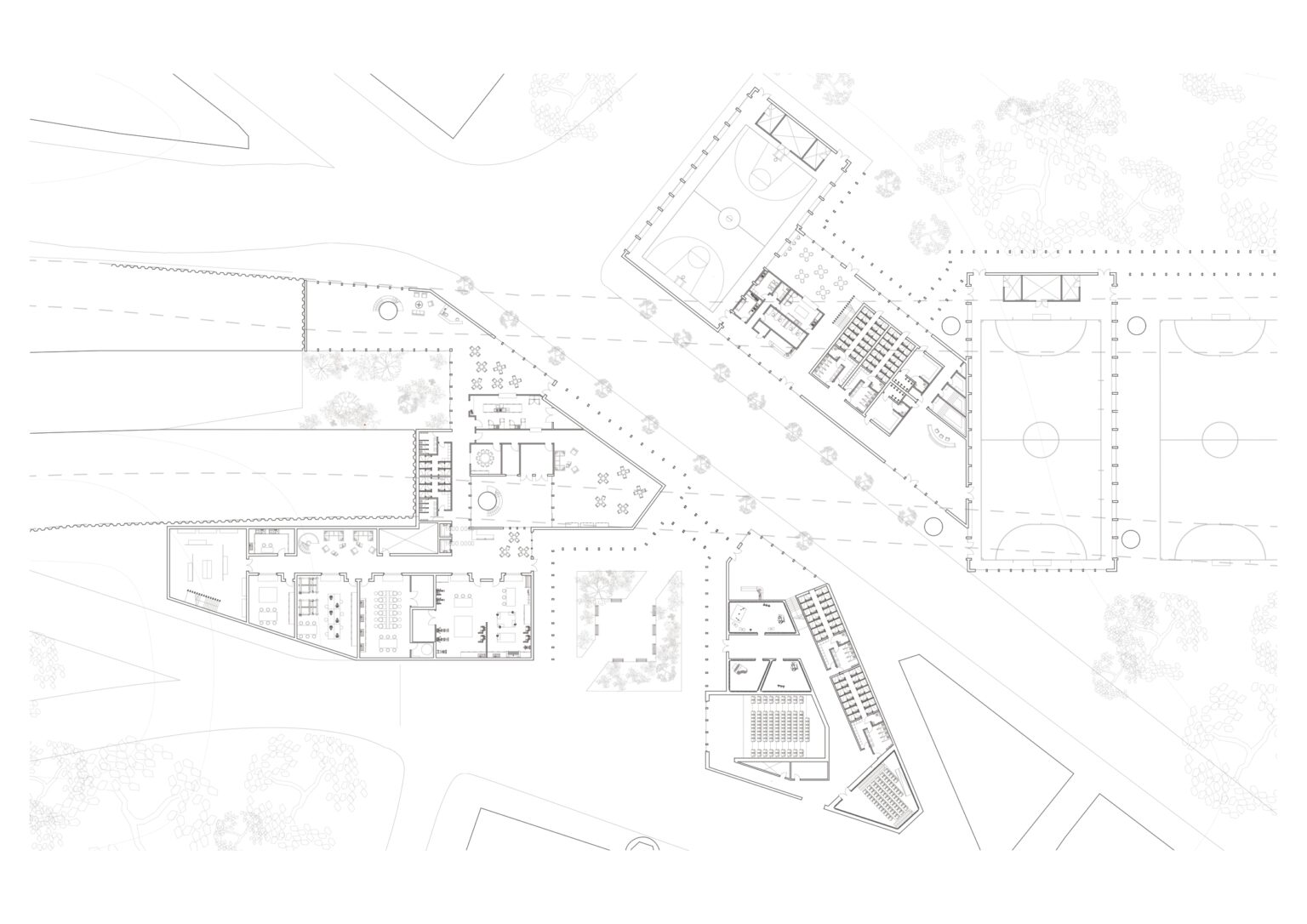 Ground Floor Plan showing the 3 different key buildings, The Workshop and Community Space (Left), The Sports and Fitness Centre (Top Right) and the Music and Performance Centre (Bottom Right)
21 of 34
Previous Next
Close 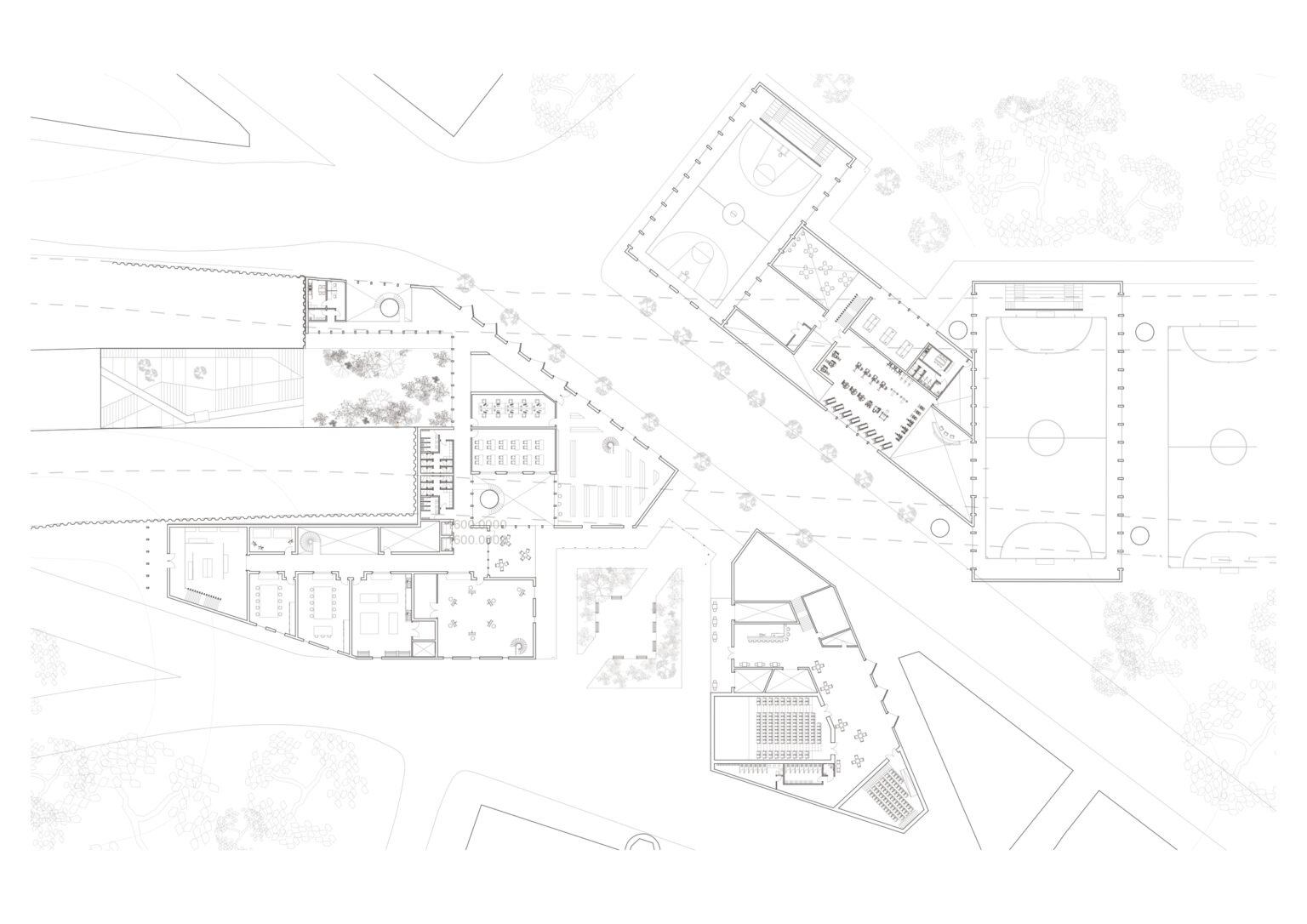 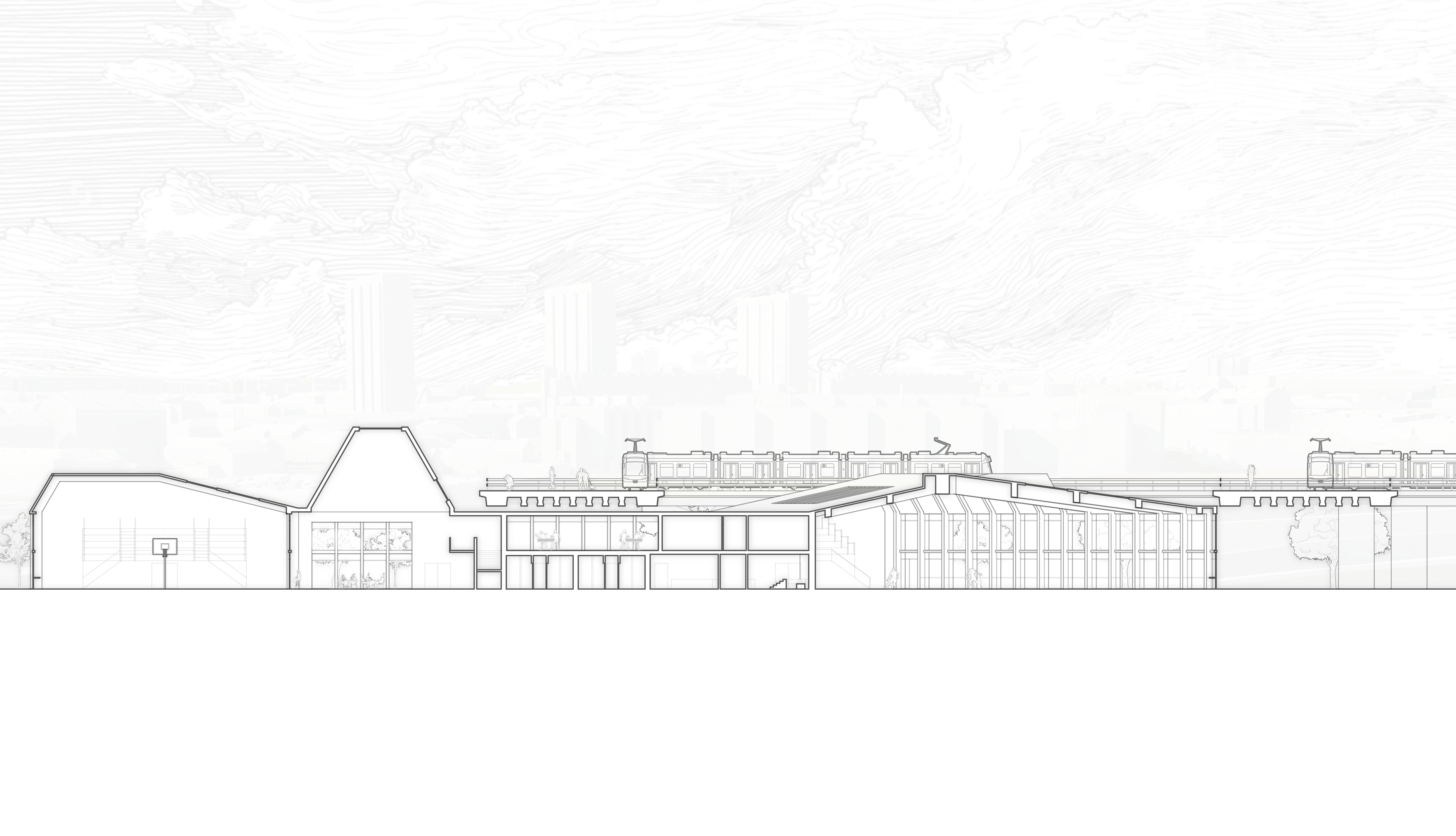 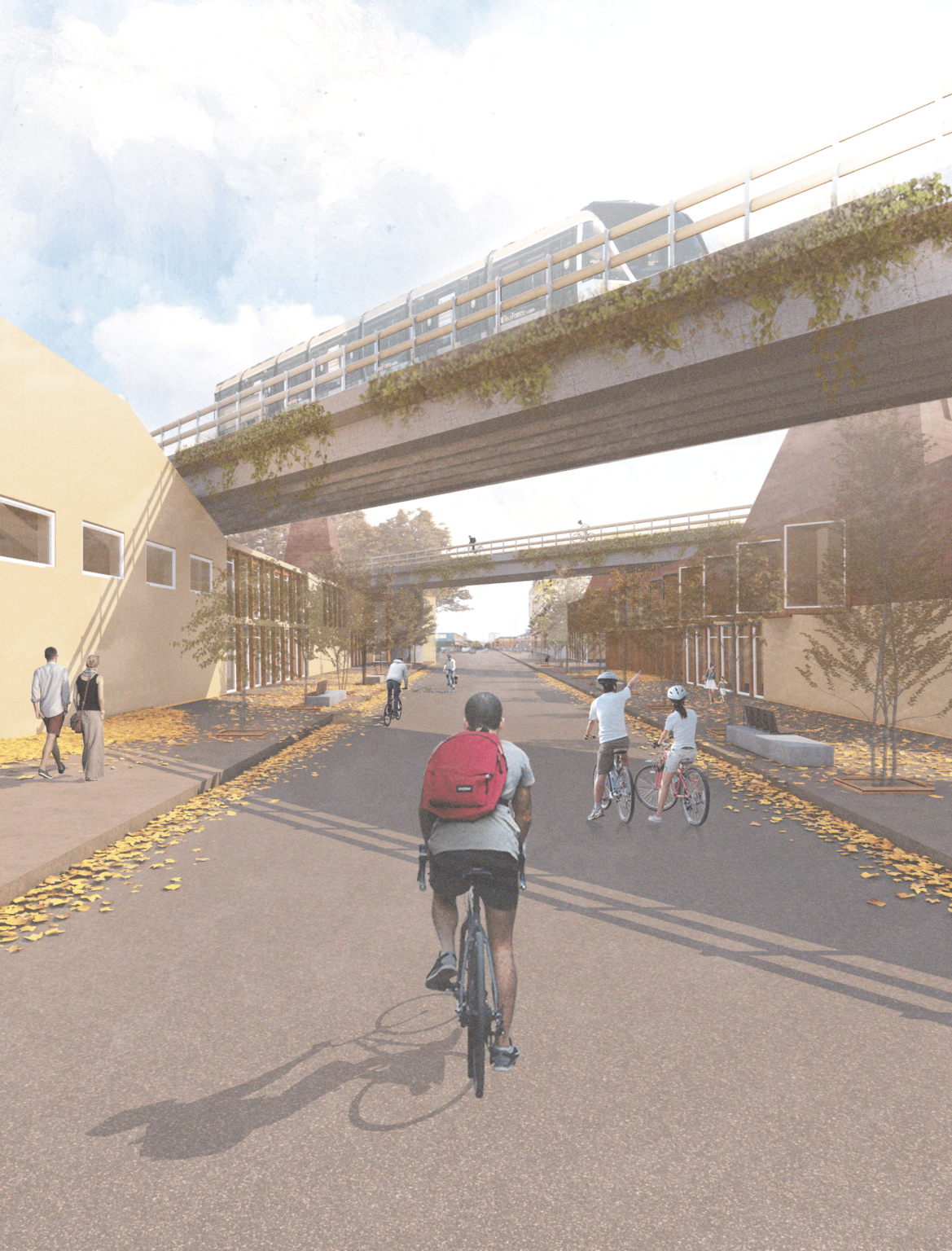 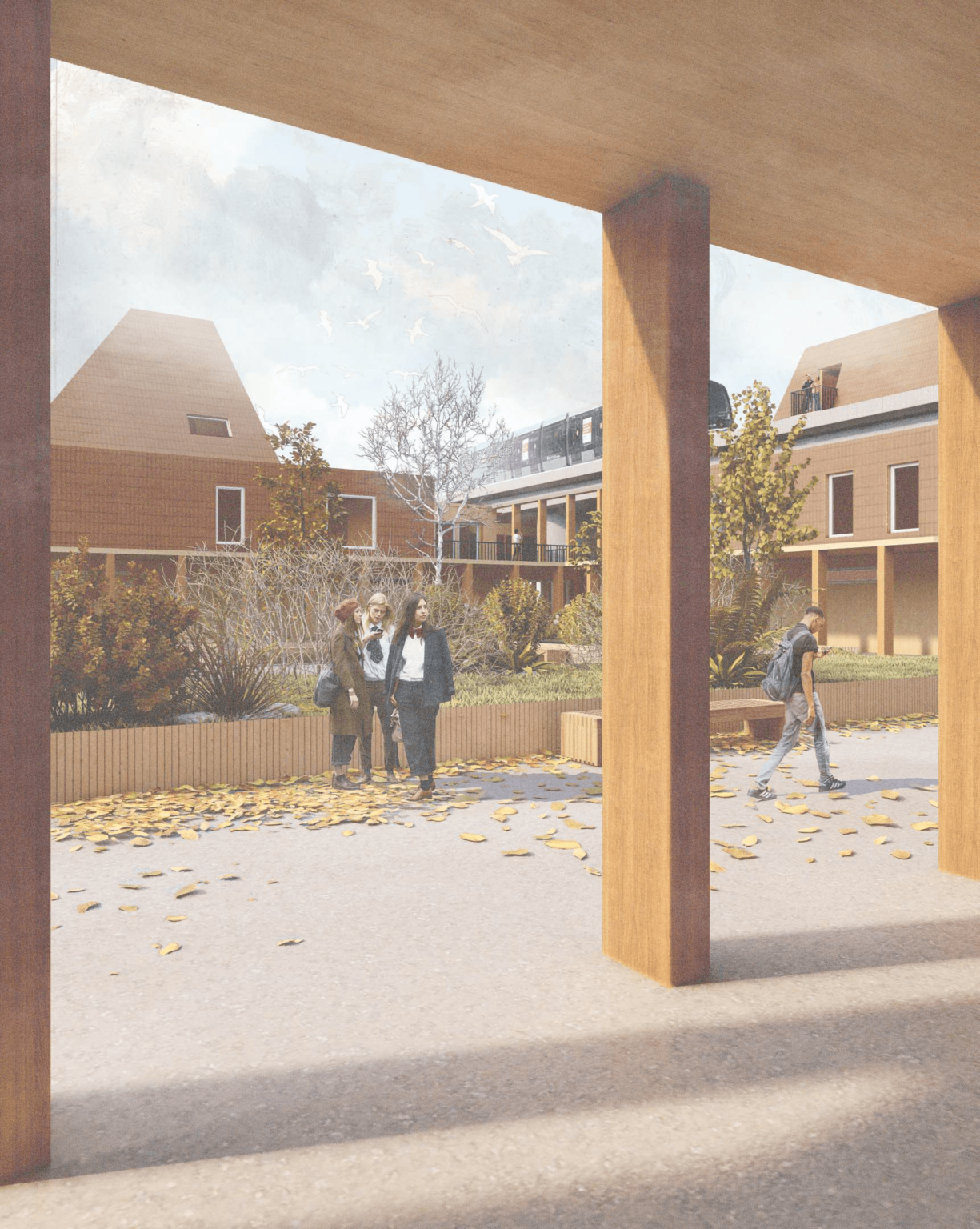 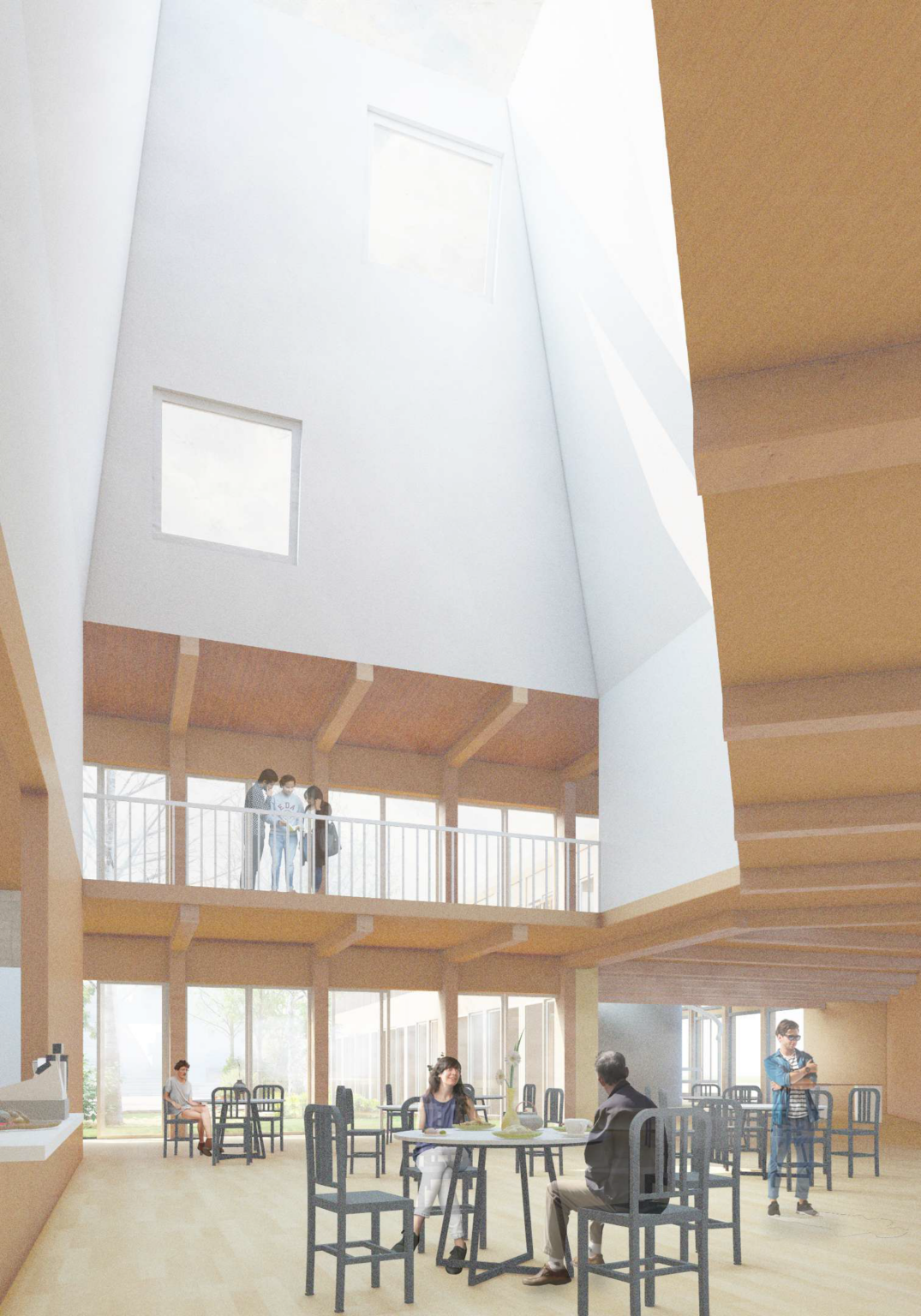 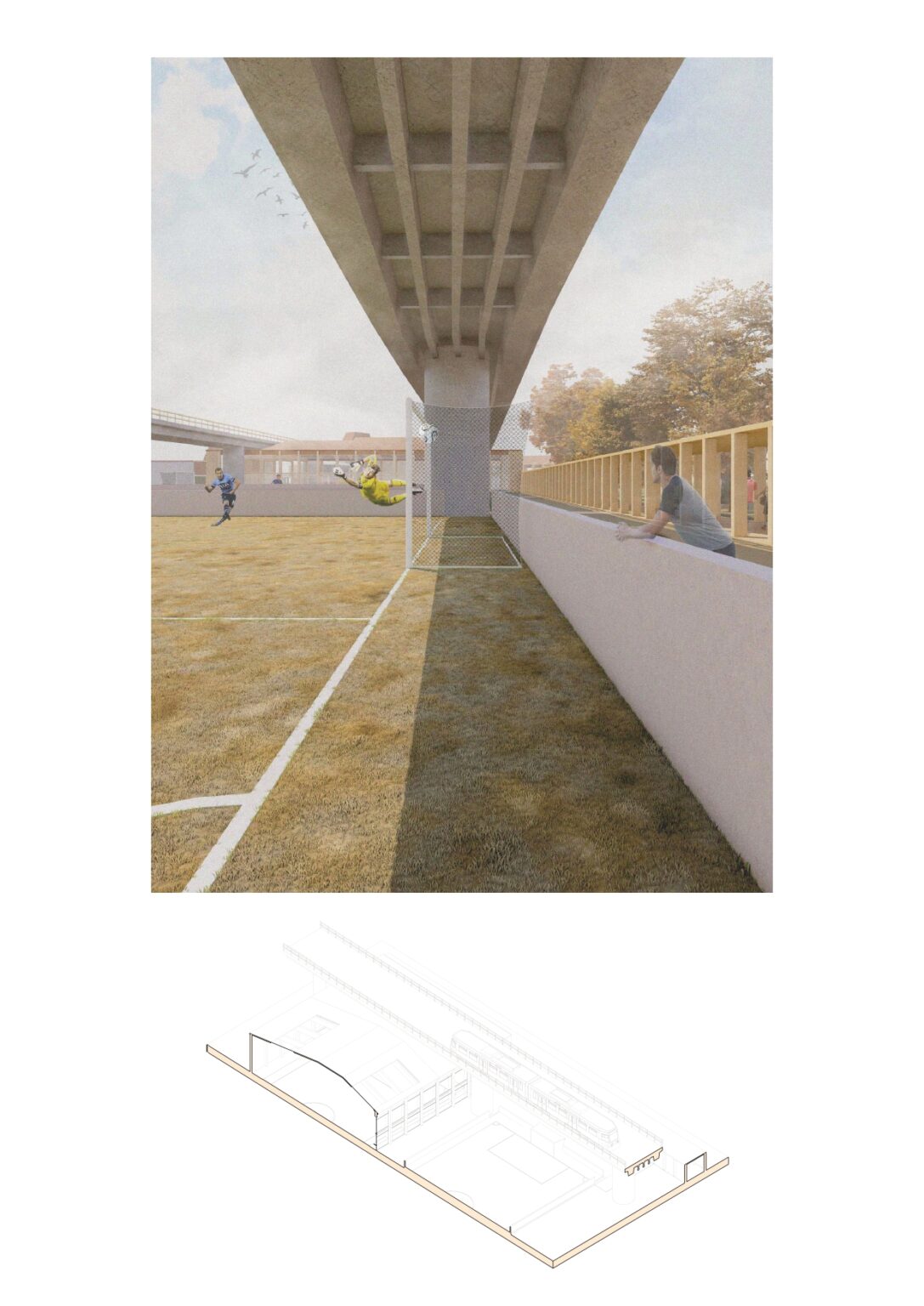 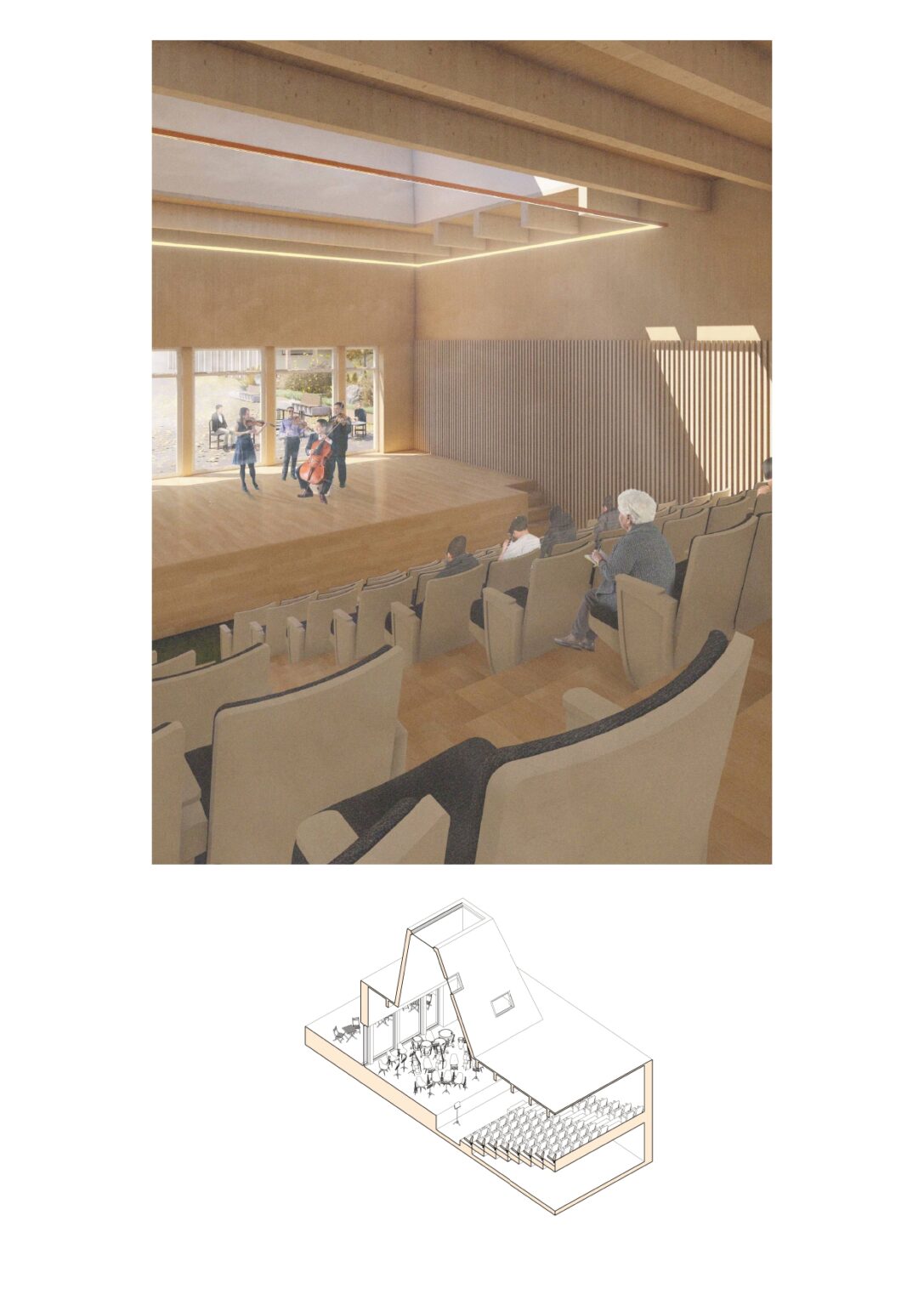 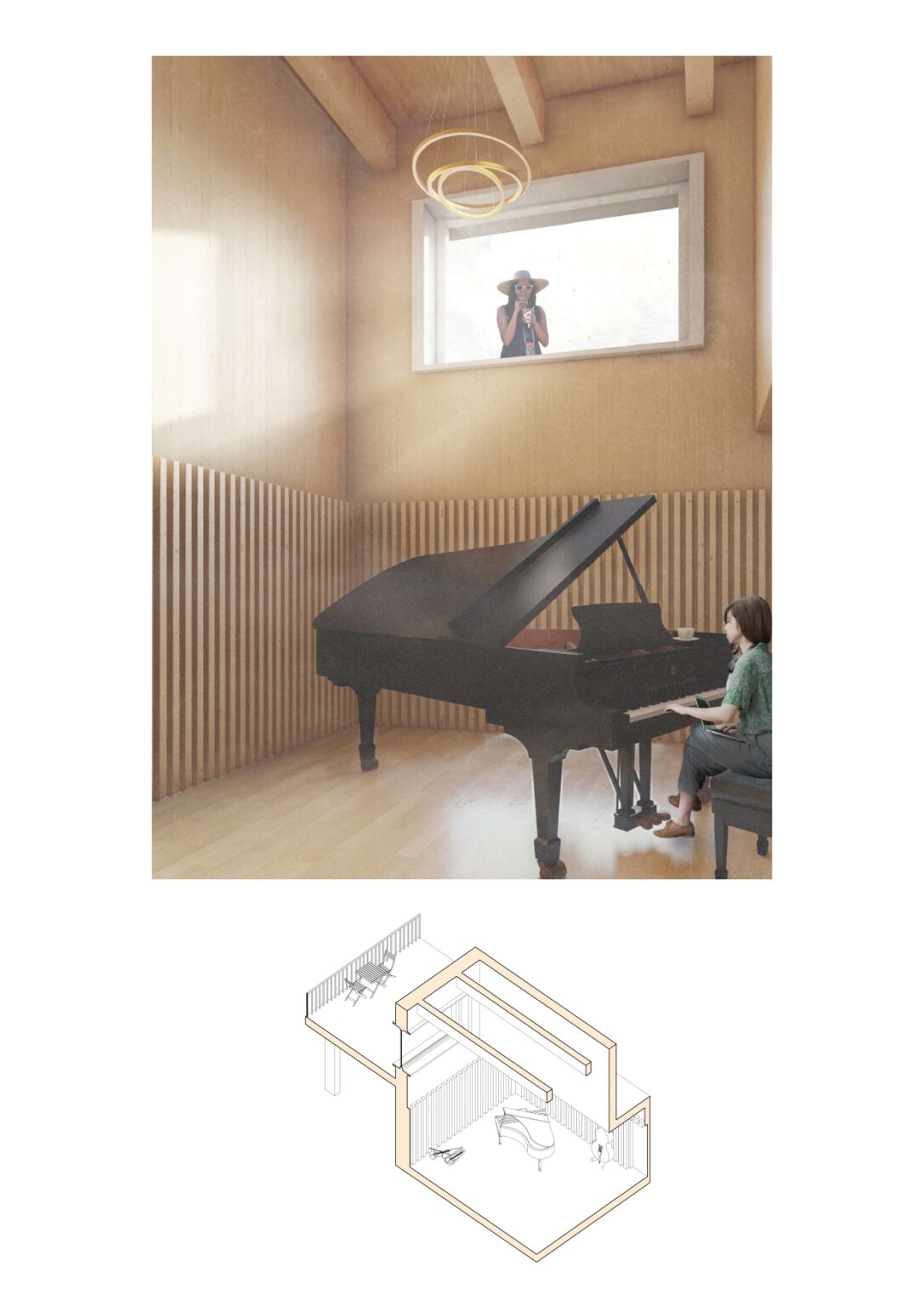 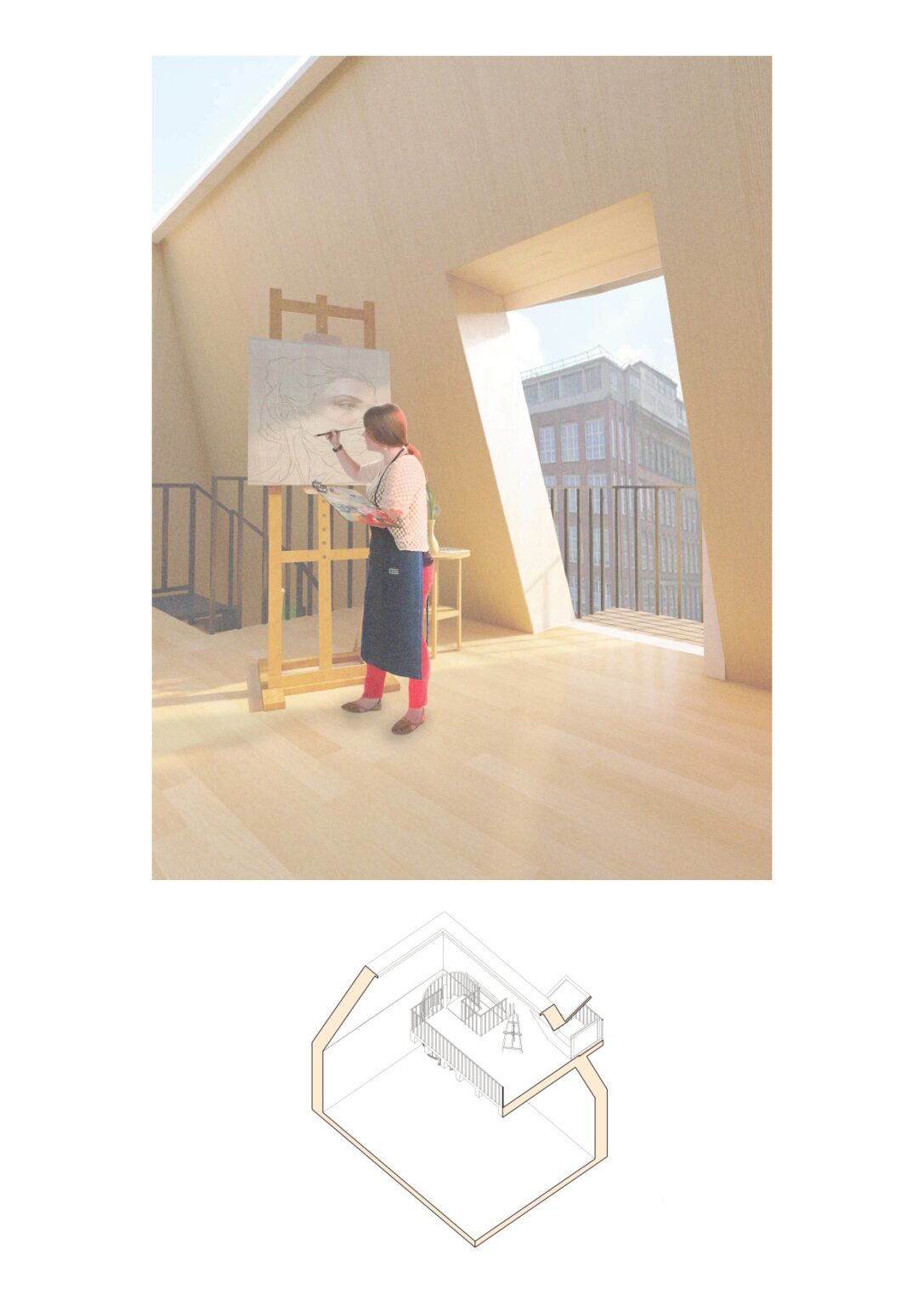 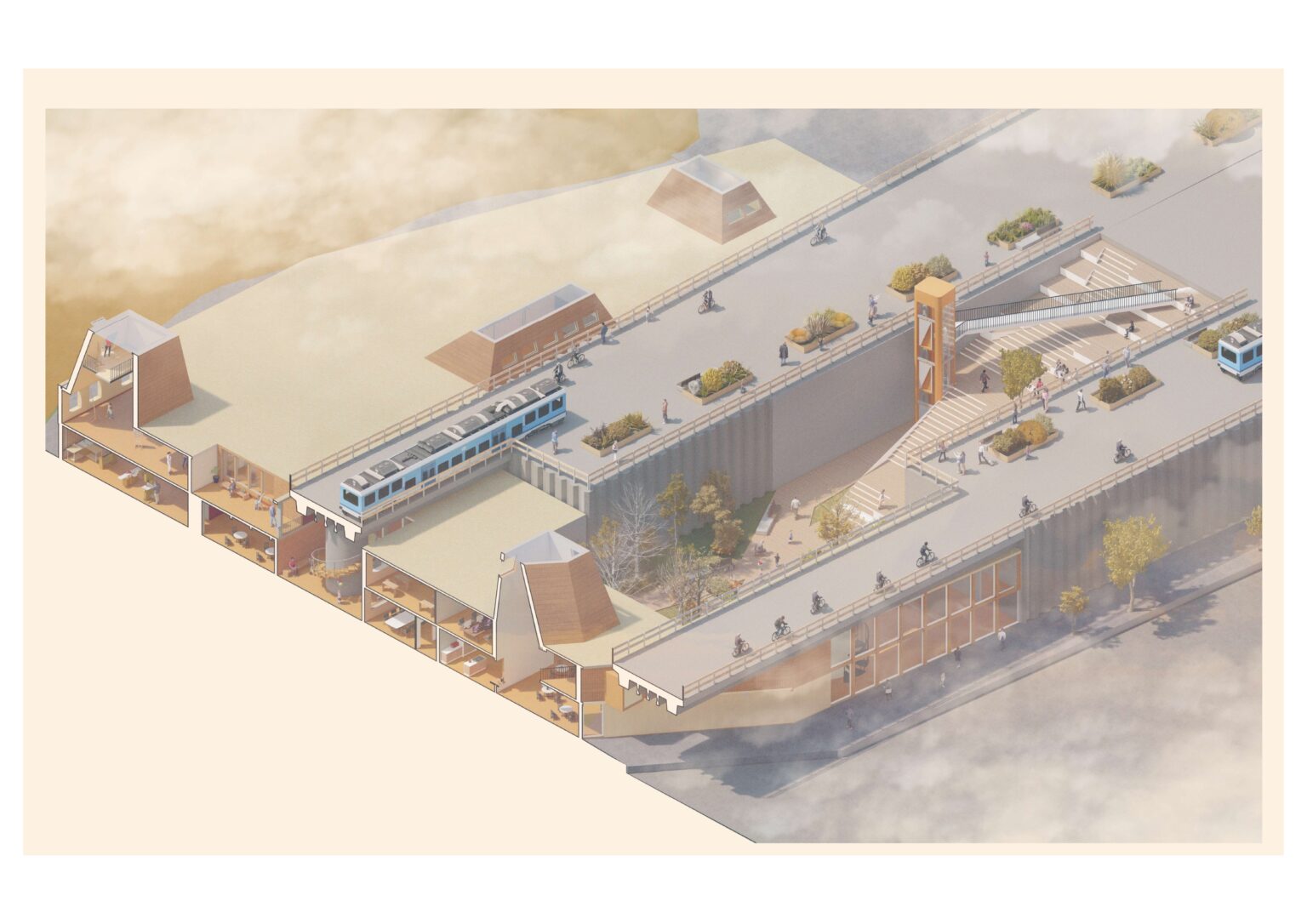 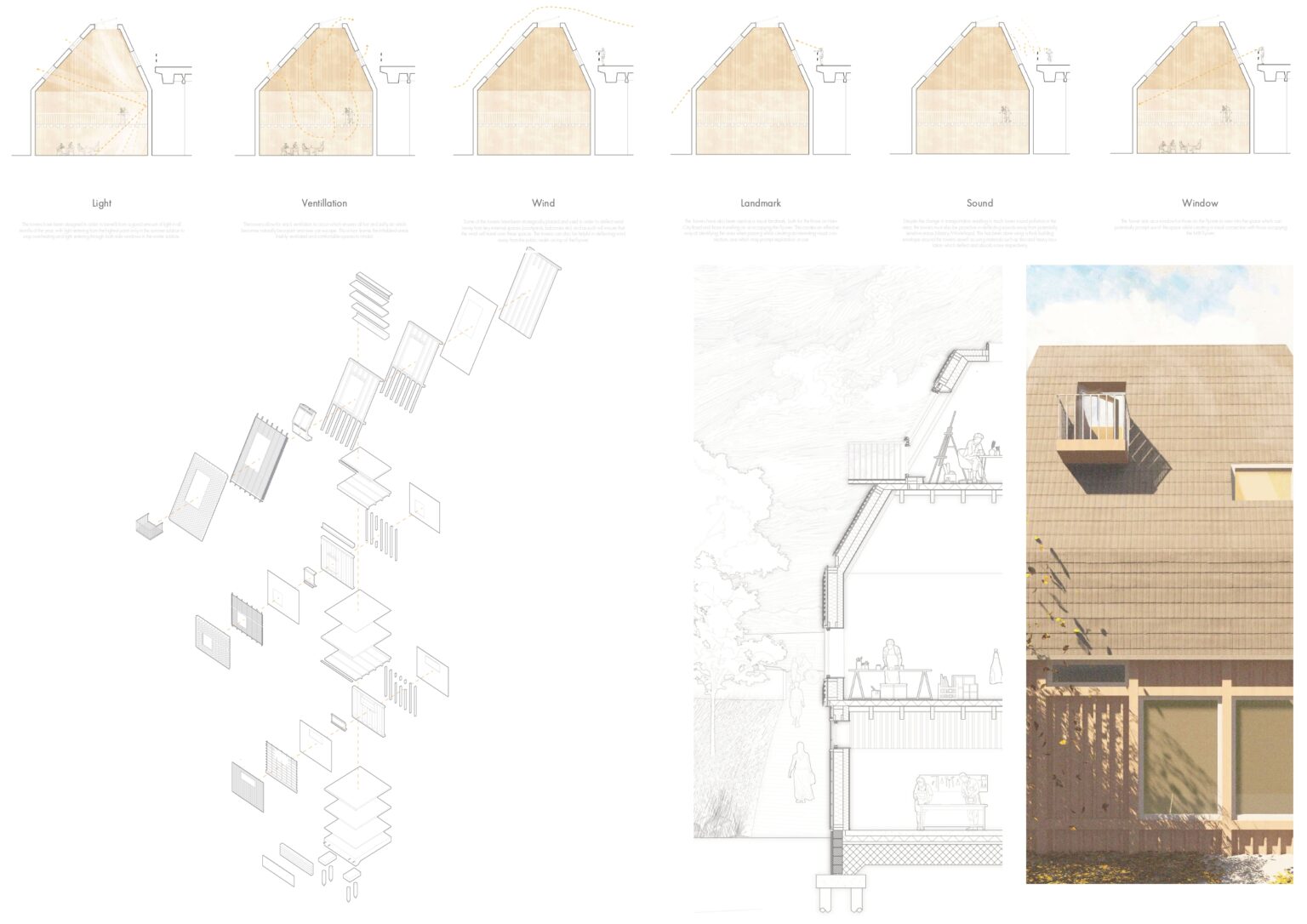