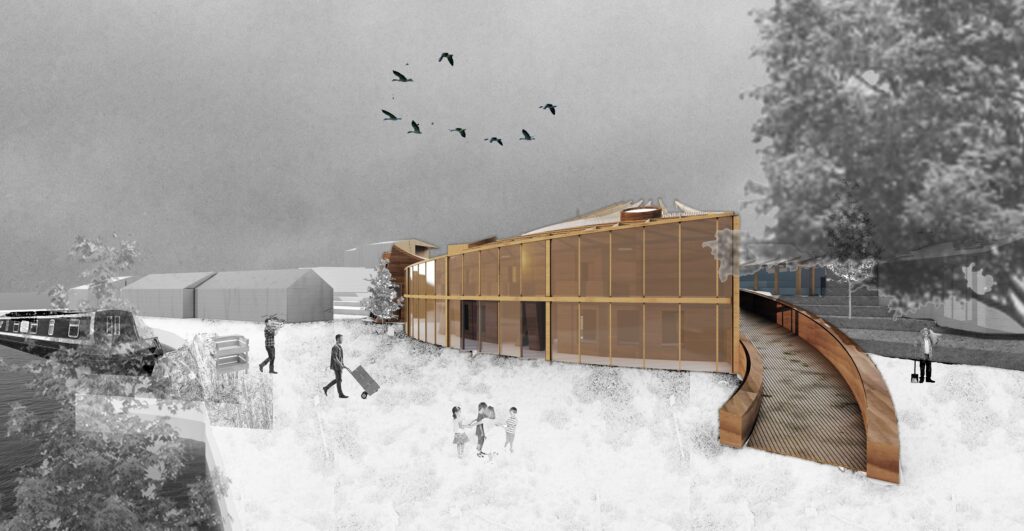 The Homegrown: An UFeX Project 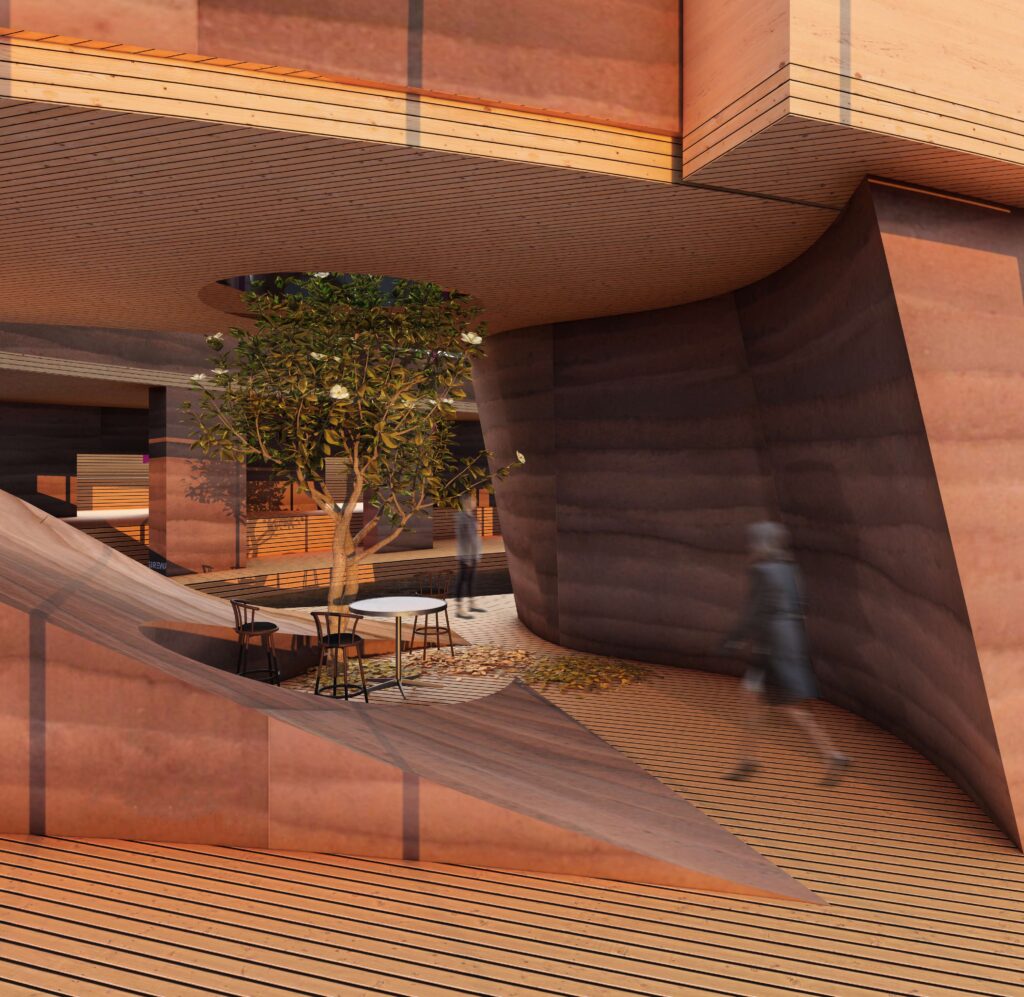 The Homegrown: An UFeX Project

The project corresponds to energy, landscape and culture through a series of dynamic spaces. From the first order of urban farms (including temple gasworks reimagined as a vertical farm) till the last order of eating, this project brings interaction within various parts of the city. More specifically, revives the vibrance of the industrial canal. In an effort to create the perfect hub on Applecross Basin of the Scottish Canals, the structure amalgamates the neighborhood, topography, sustainability, demography and experiential qualities.

To highlight the wider site attributes into the site, the narrowness is followed within the spaces, pebbled secondary path is introduced to connect the tertiary road that runs in the middle of the site to the primary road, through which vehicles can access the structure. Moreover, introducing a pond in the core of the hub brings in a visual connectivity from the canal into the structure.

The structure itself promotes the very idea of reducing operational energy by introducing a double shell facade on the south facing. Moreover, having a compact hub and house in a singular unit reduces energy loss in locomotion. Moreover, merging of two narrow elements to create a visible privacy border between the house and the hub gives a sense of comfort for the inhabitants. The visual comfort is continued with hidden pockets of greenary, the aquaponic pond, curved forms, etc. To enrich the ecosystem, the pond acts as a natural humidifier and cooler when required. Likewise, temperature control is also done by the trombe wall facade. Creating various levels that overlook nature in one way or another fosters an urban village setup to act as a node for various zones surrounding the site. Residents have got markets to engage with, workers have got the kitchen/ dining to look forward to, tourists have got an abundance of eco-tourism and leisure visitors have got a calming environment. 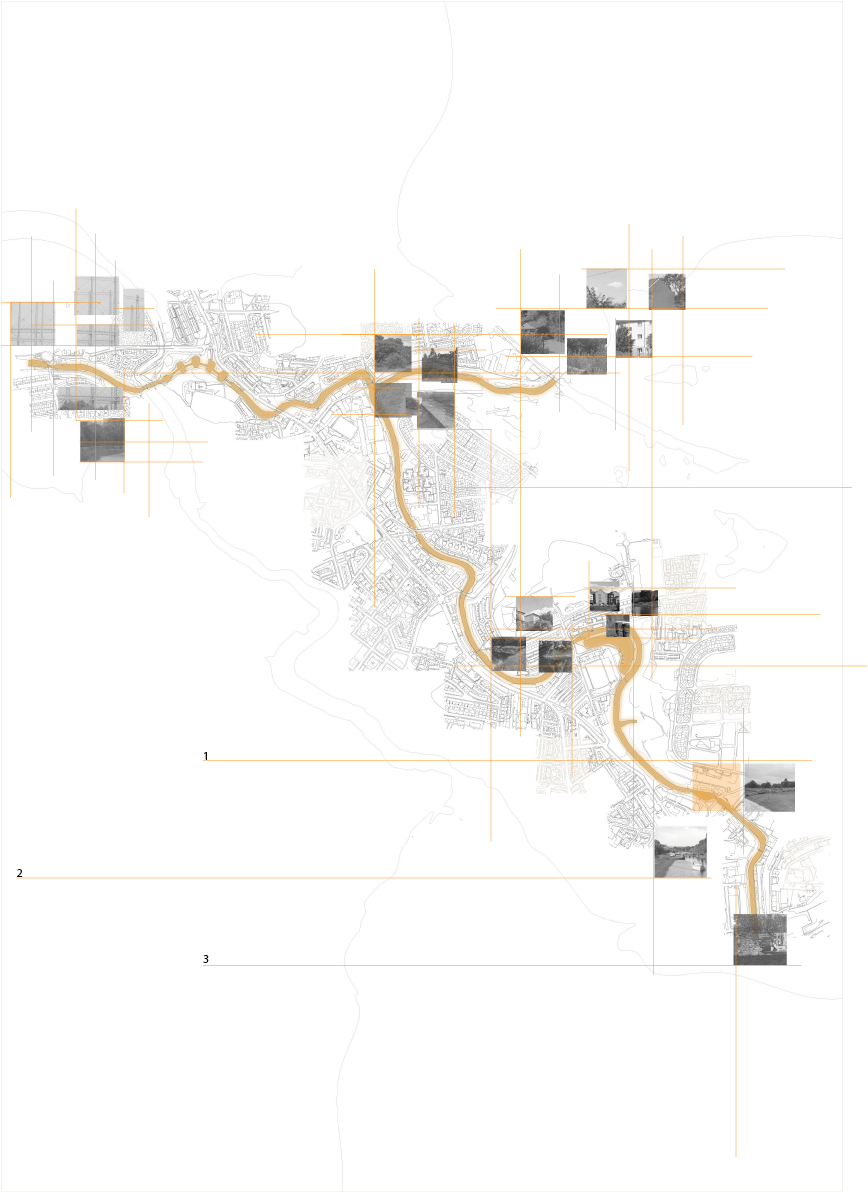 1: The energy of the place is an amalgamation of the people, water, sky, plants and their reflection 2: The landscape is framed by the various textures and their foreground. 3: An evolution of walls. There is a constant juxtaposition between the panels and the graffiti that fosters engagement between the people and the architectural elements.
1 of 28
Previous Next
Close 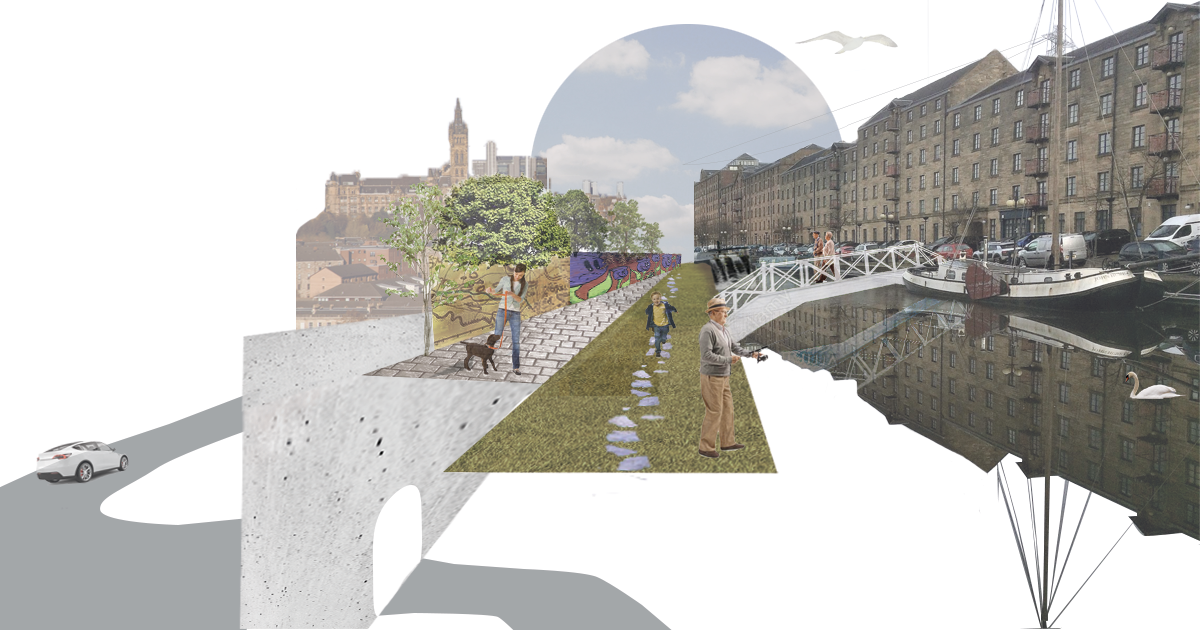 A psychoanalysis of the site showcasing the narrow and zoned separation.
2 of 28
Previous Next
Close 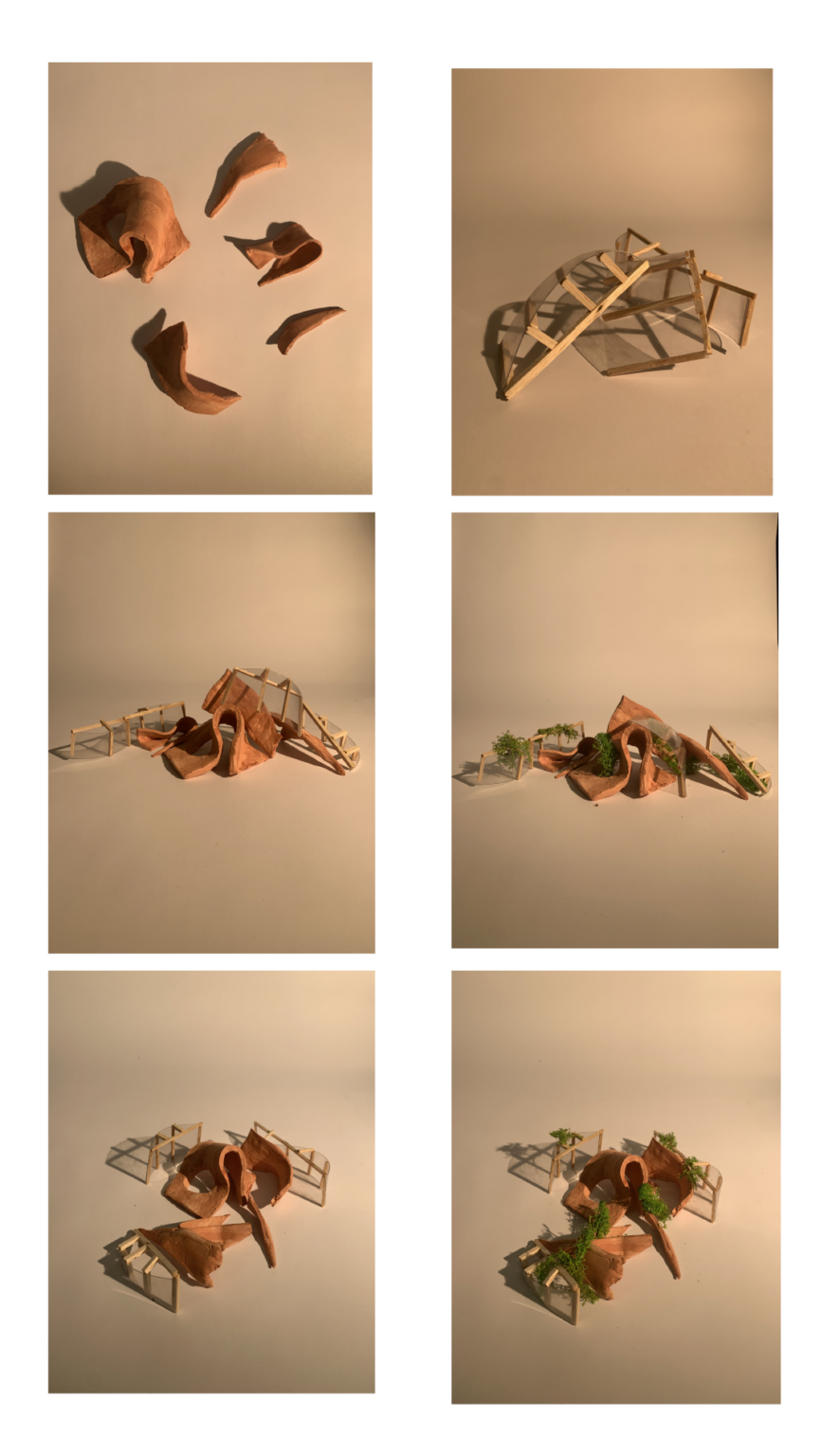 3 of 28
Previous Next
Close 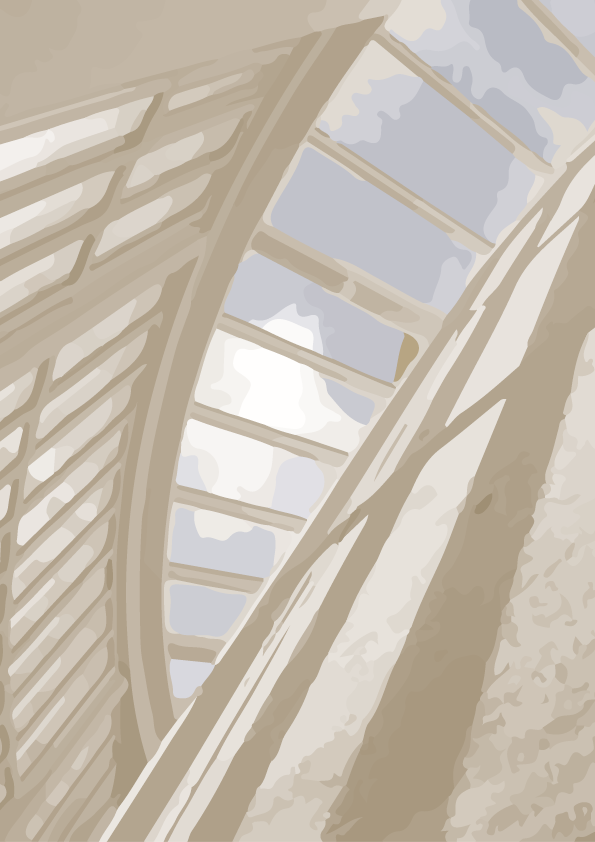 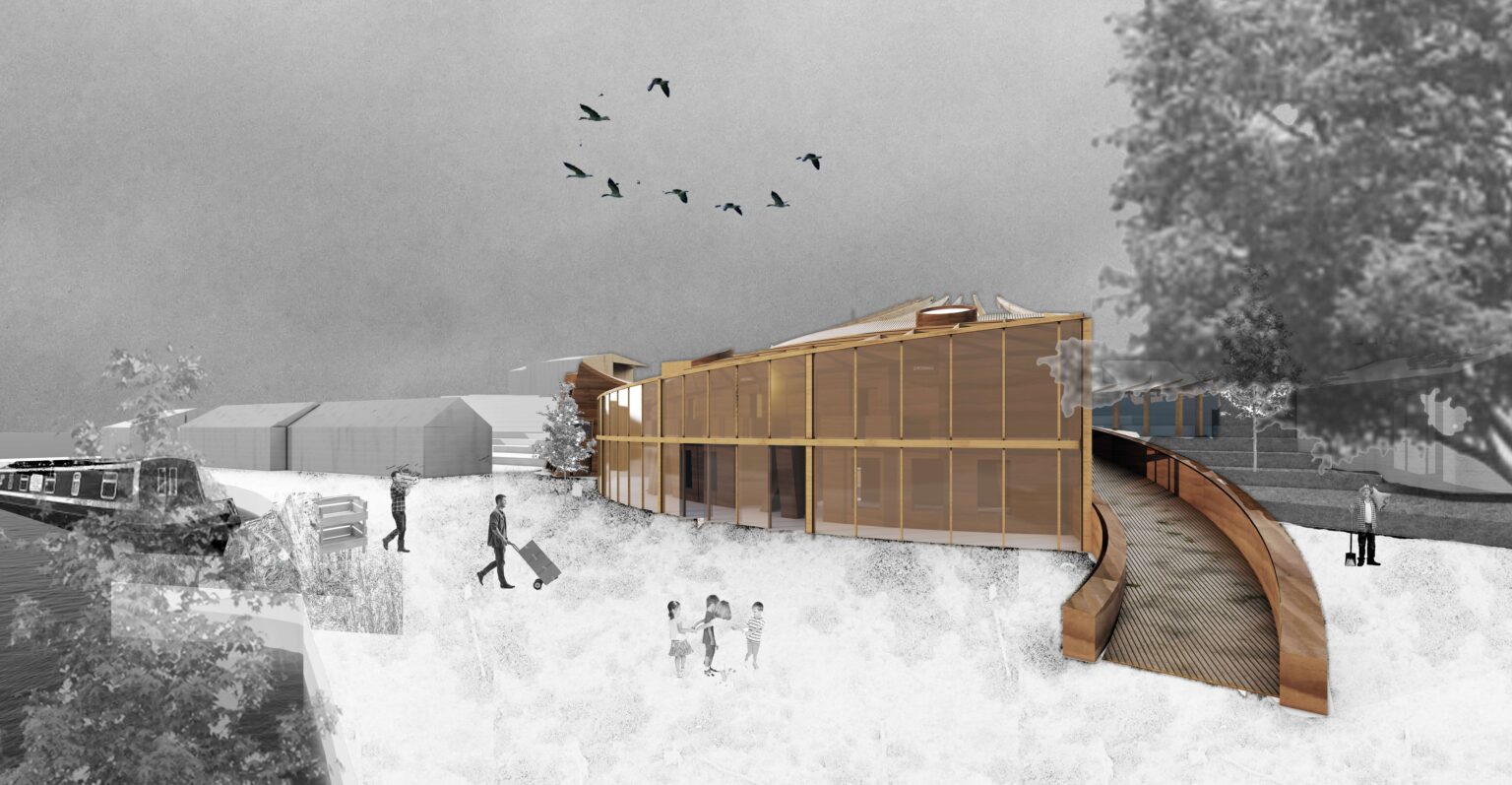 5 of 28
Previous Next
Close 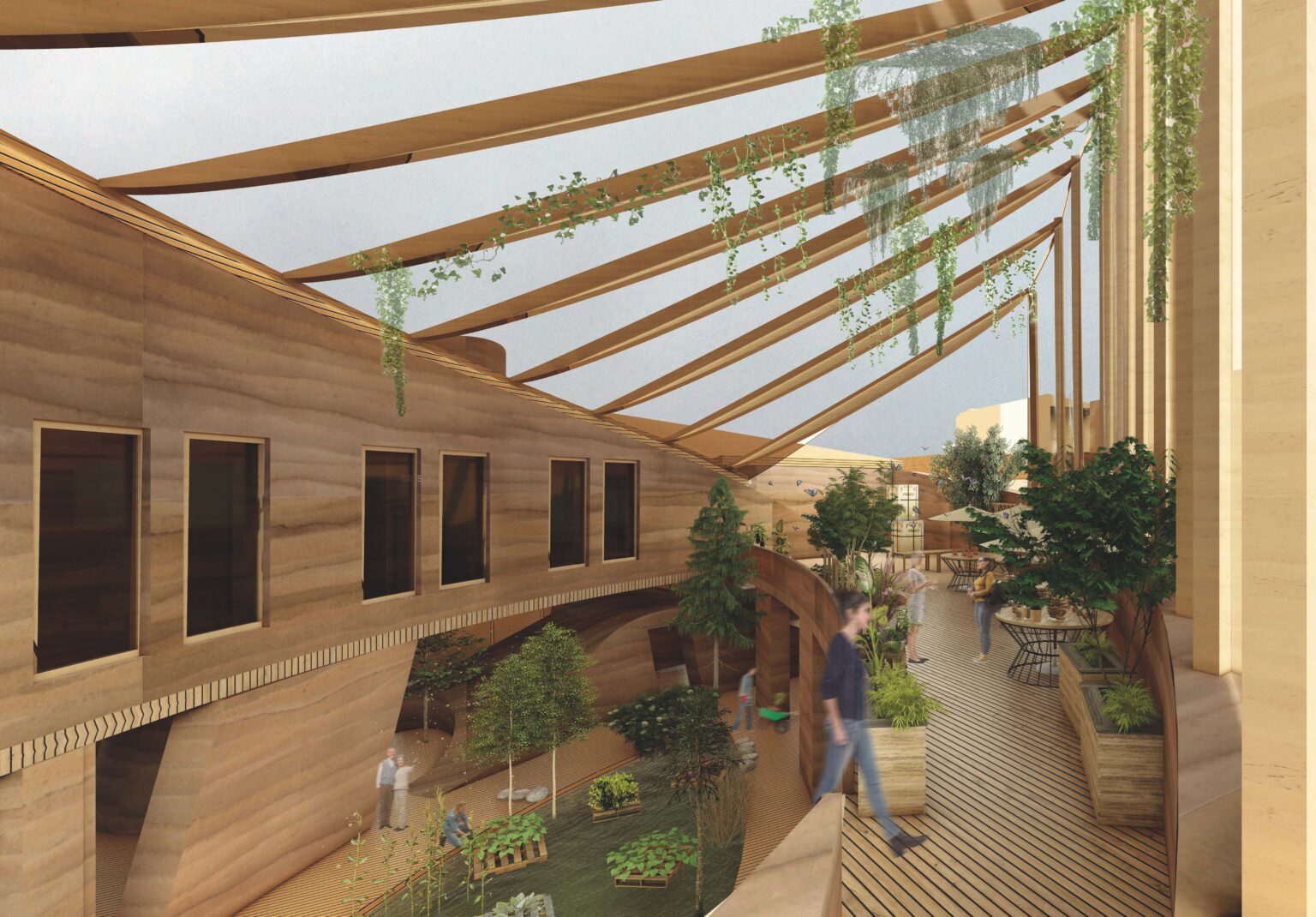 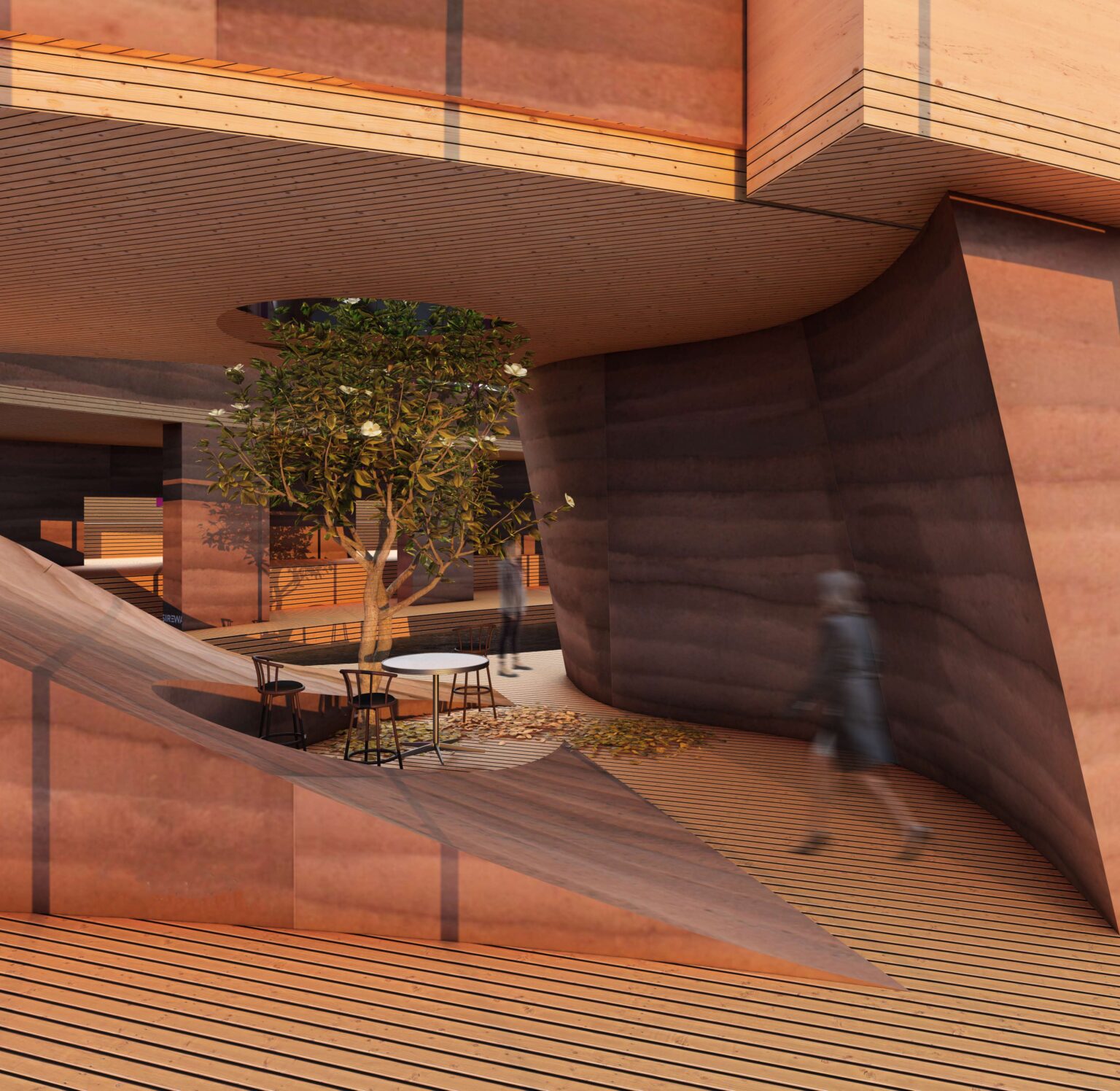 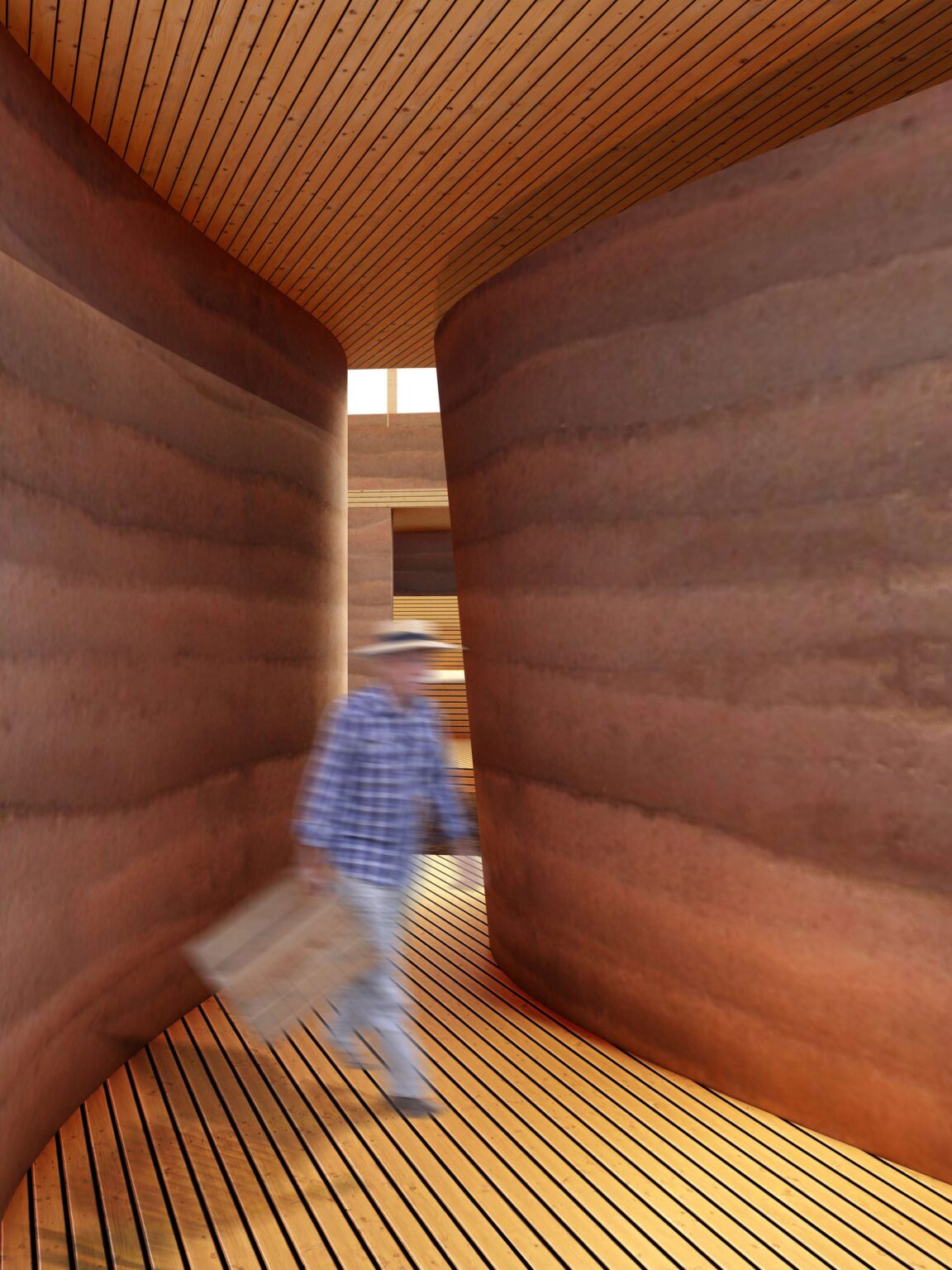 A narrow passage with clerestory windows create a mystery along the path. This passage leads to the aquaponic pond filled courtyard
8 of 28
Previous Next
Close

9 of 28
Previous Next
Close 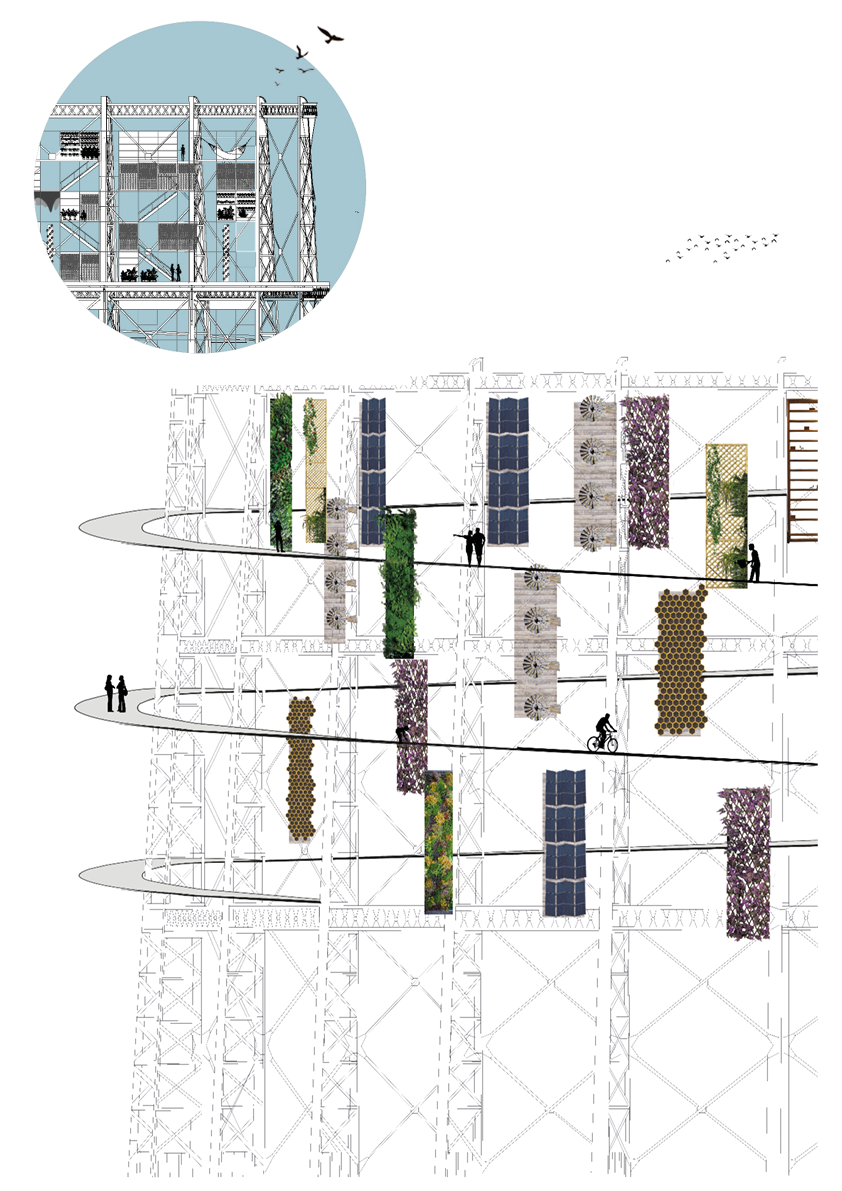 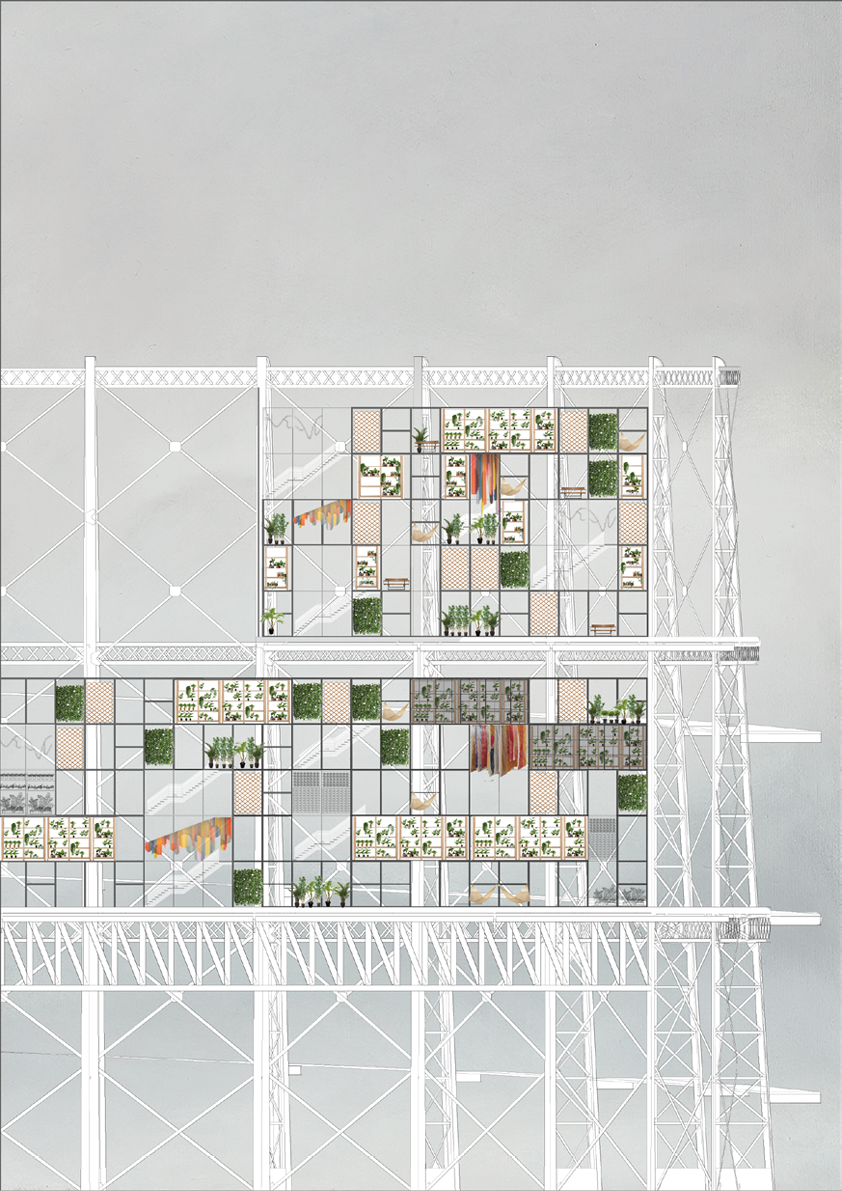 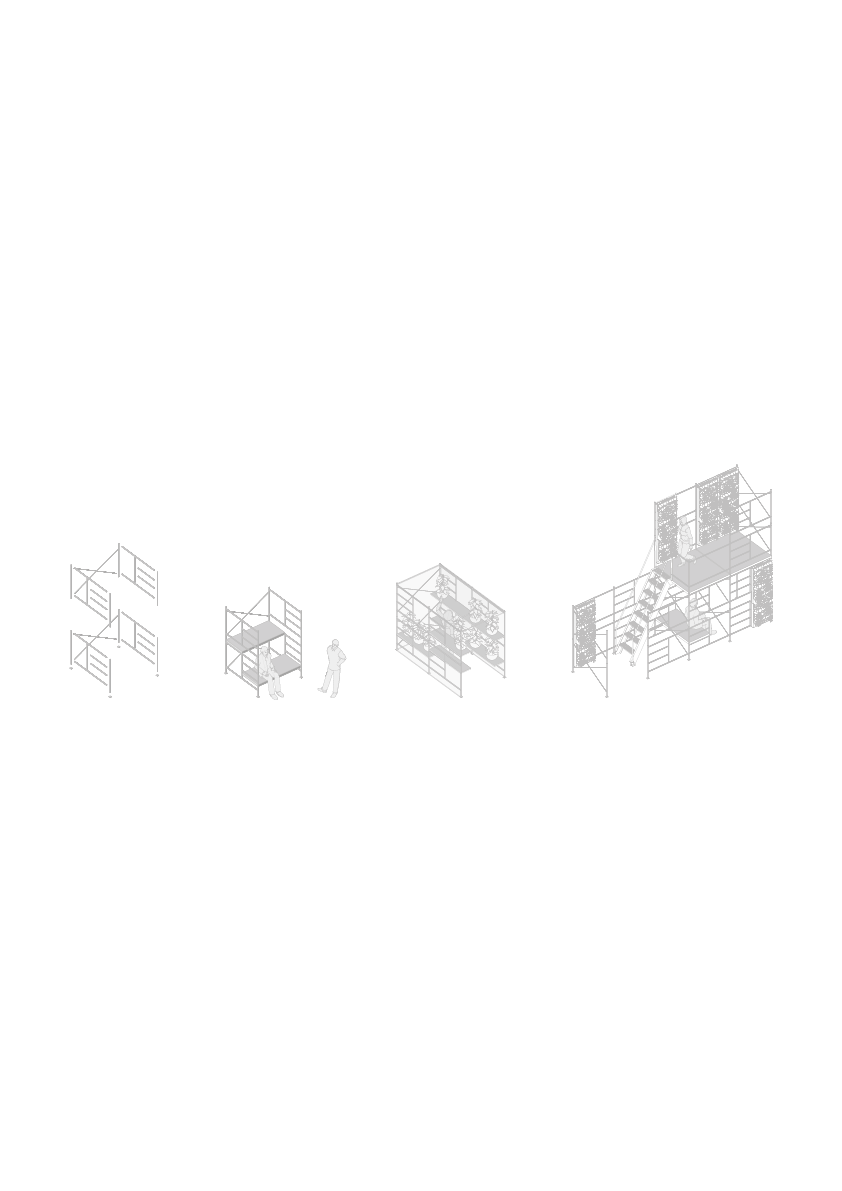 Axonometric view of the Temple Gasworks 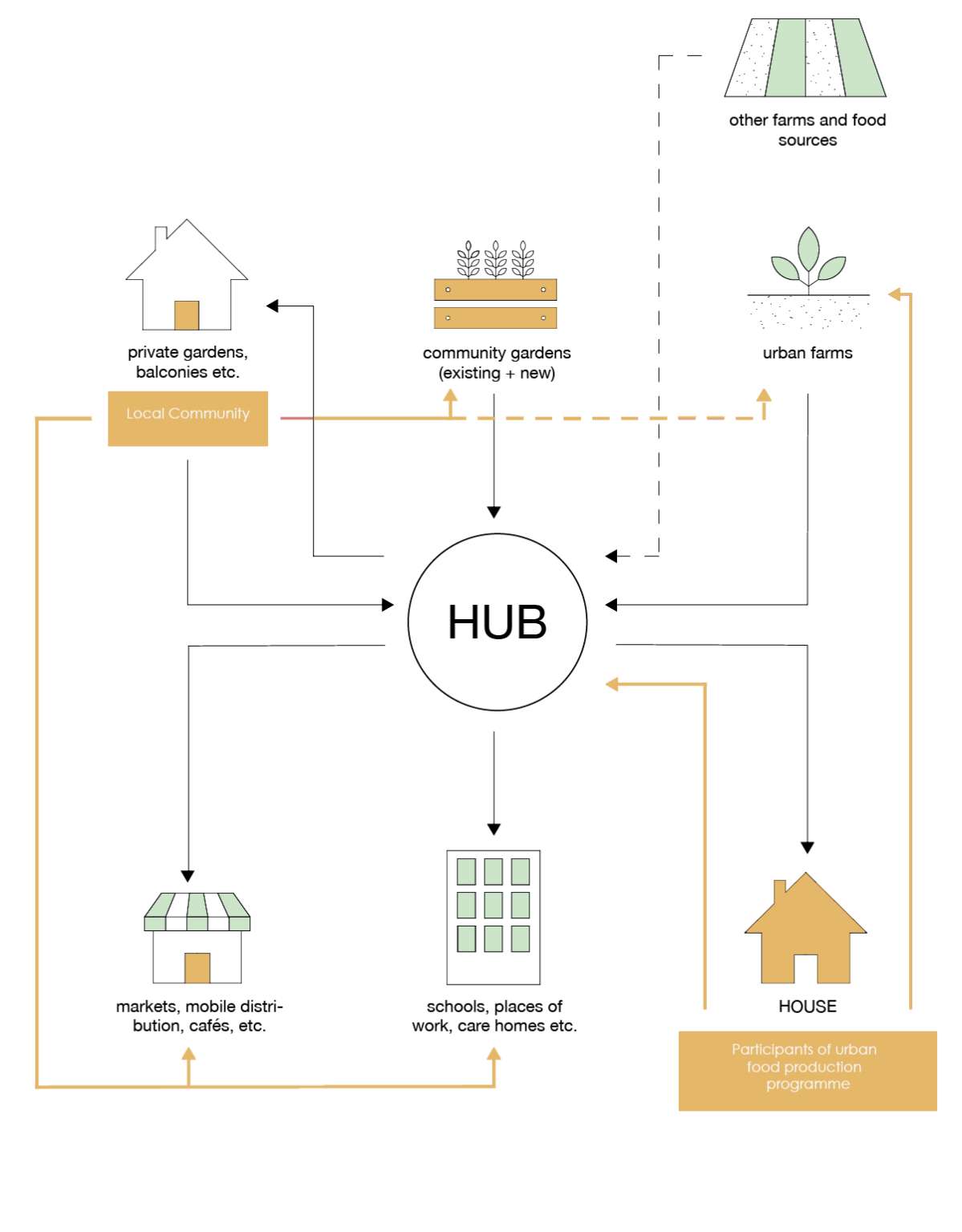 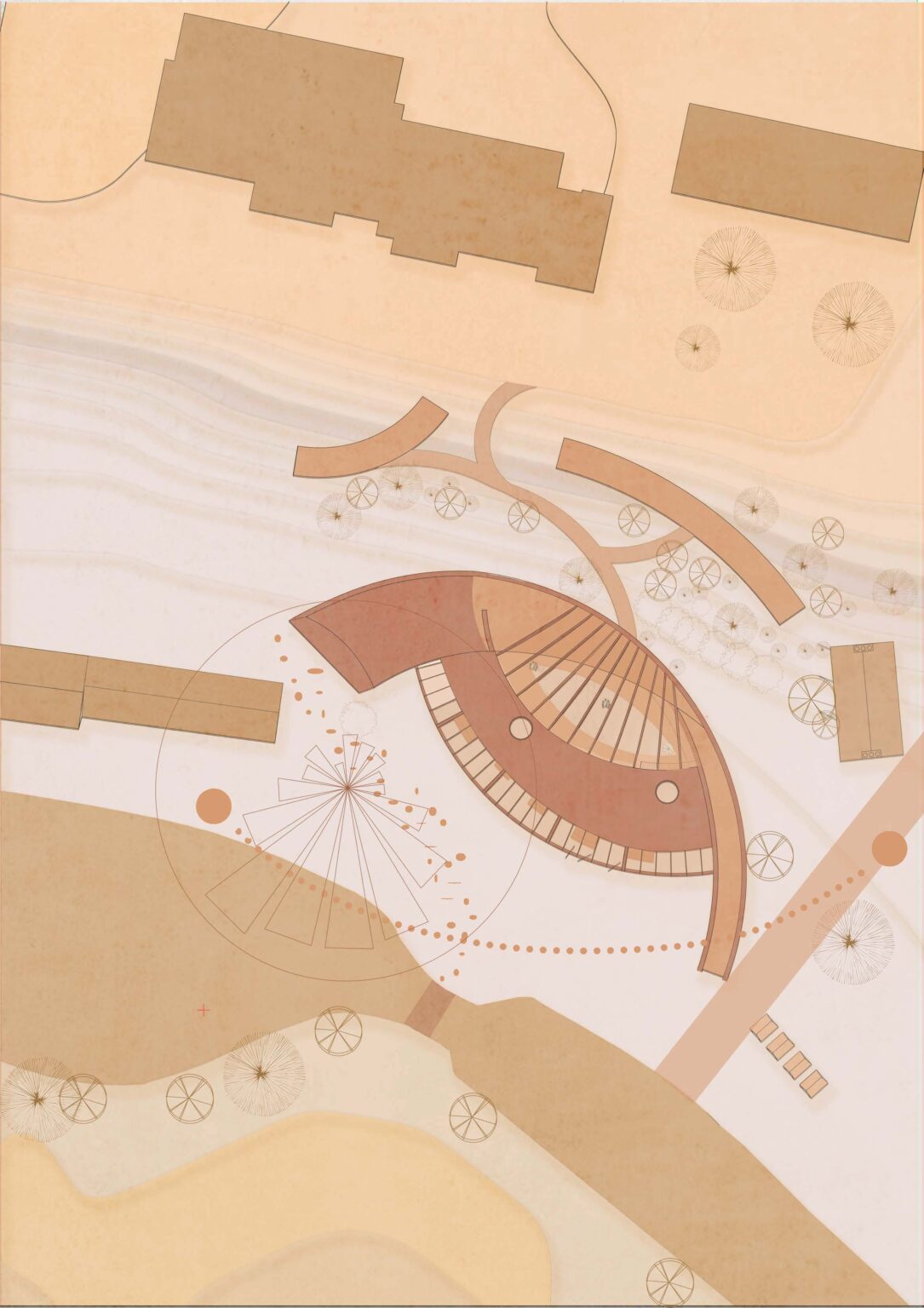 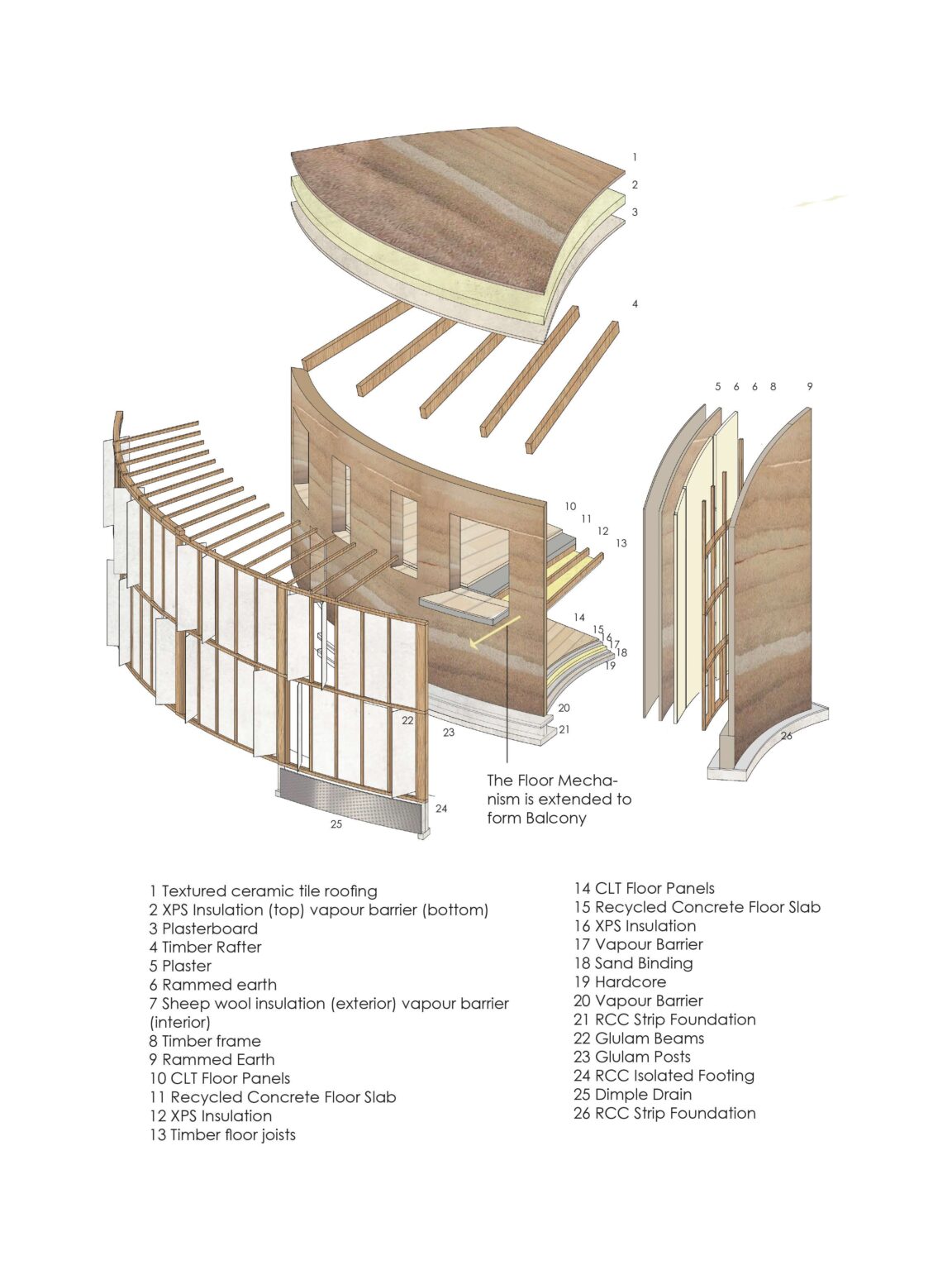 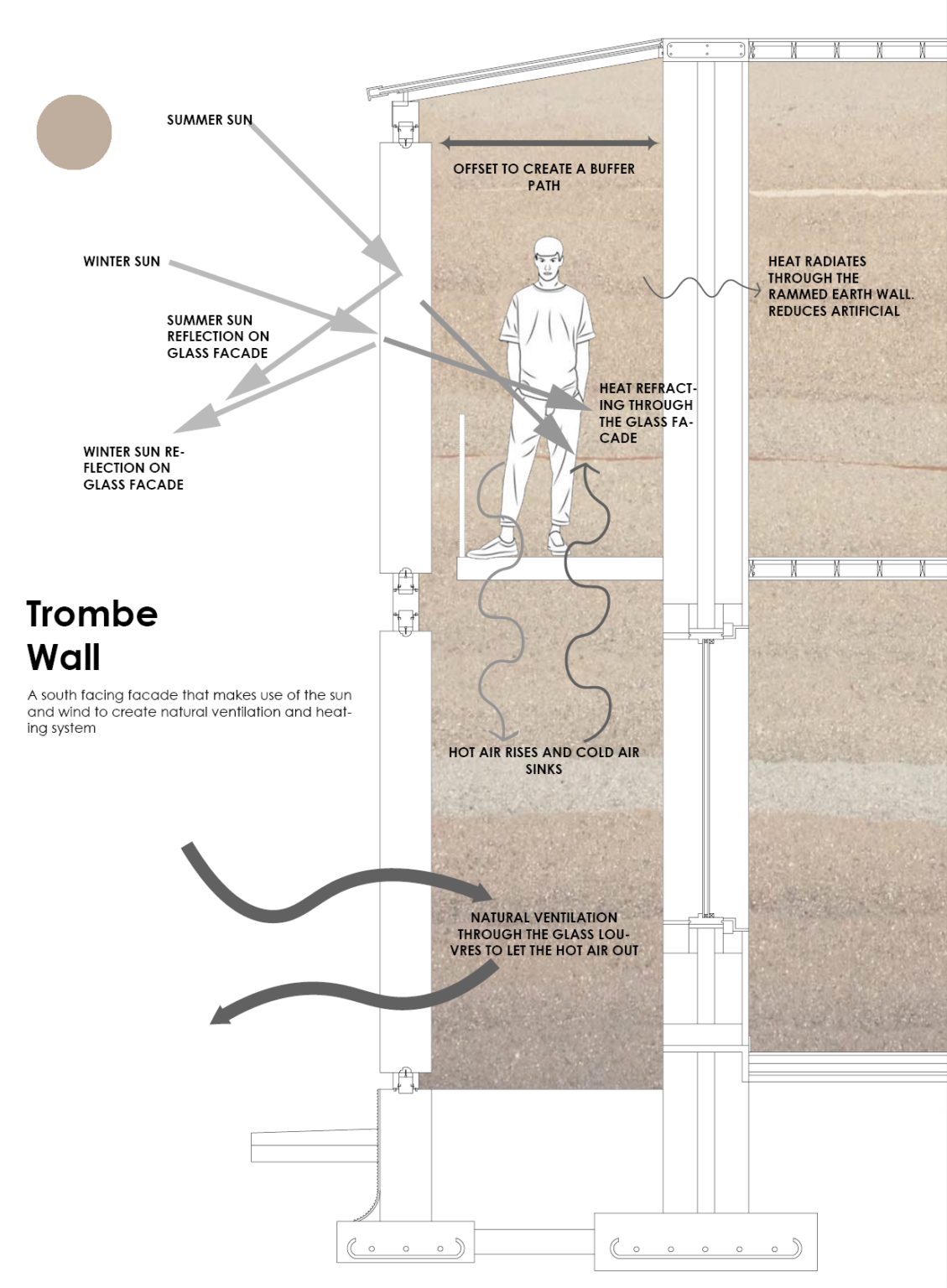 wall section of the facade 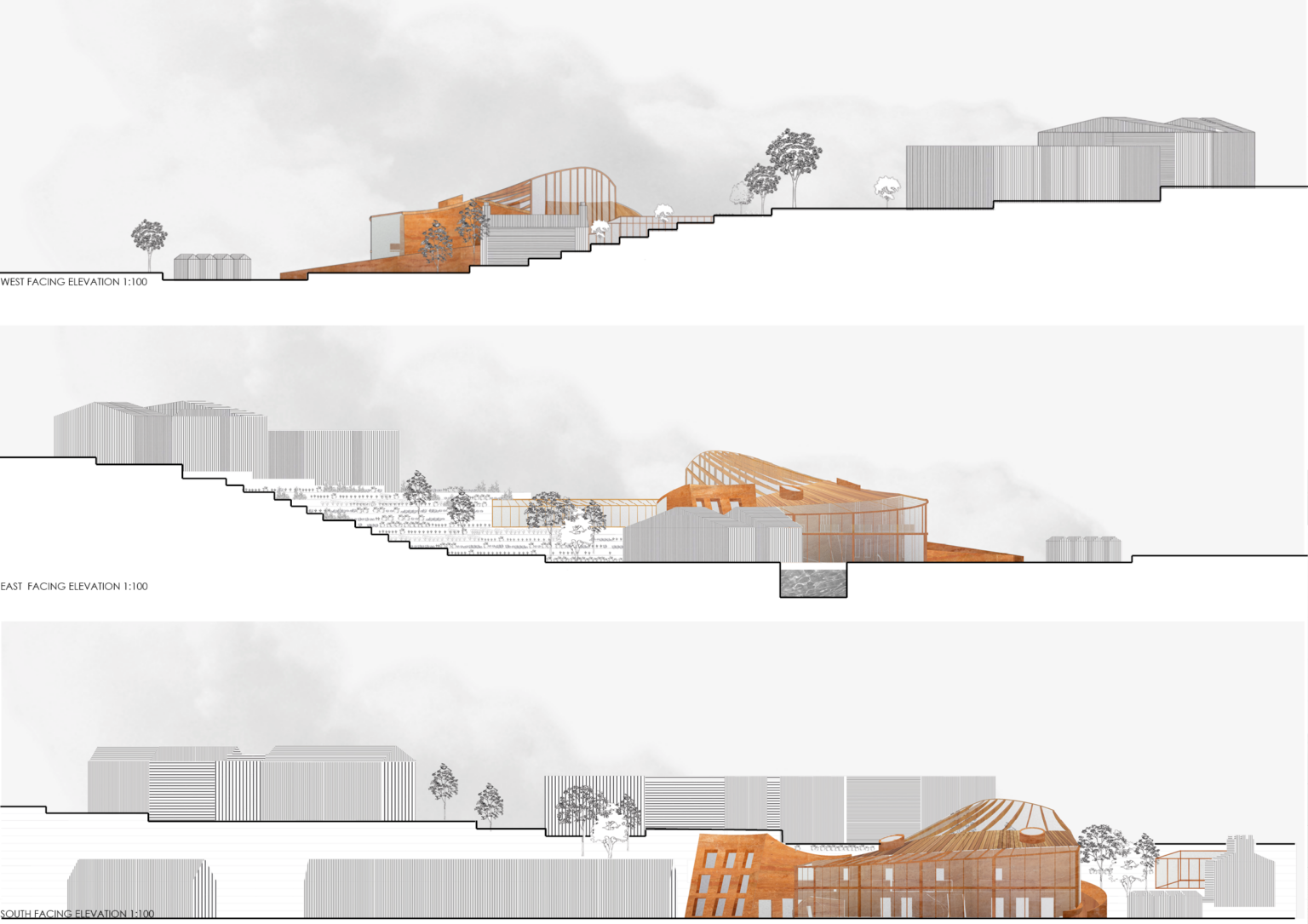 The aquaponic pond fosters a permacultural ecosystem between plants and fishes. Moreover, the water acts as a temperature controlling agent
20 of 28
Previous Next
Close 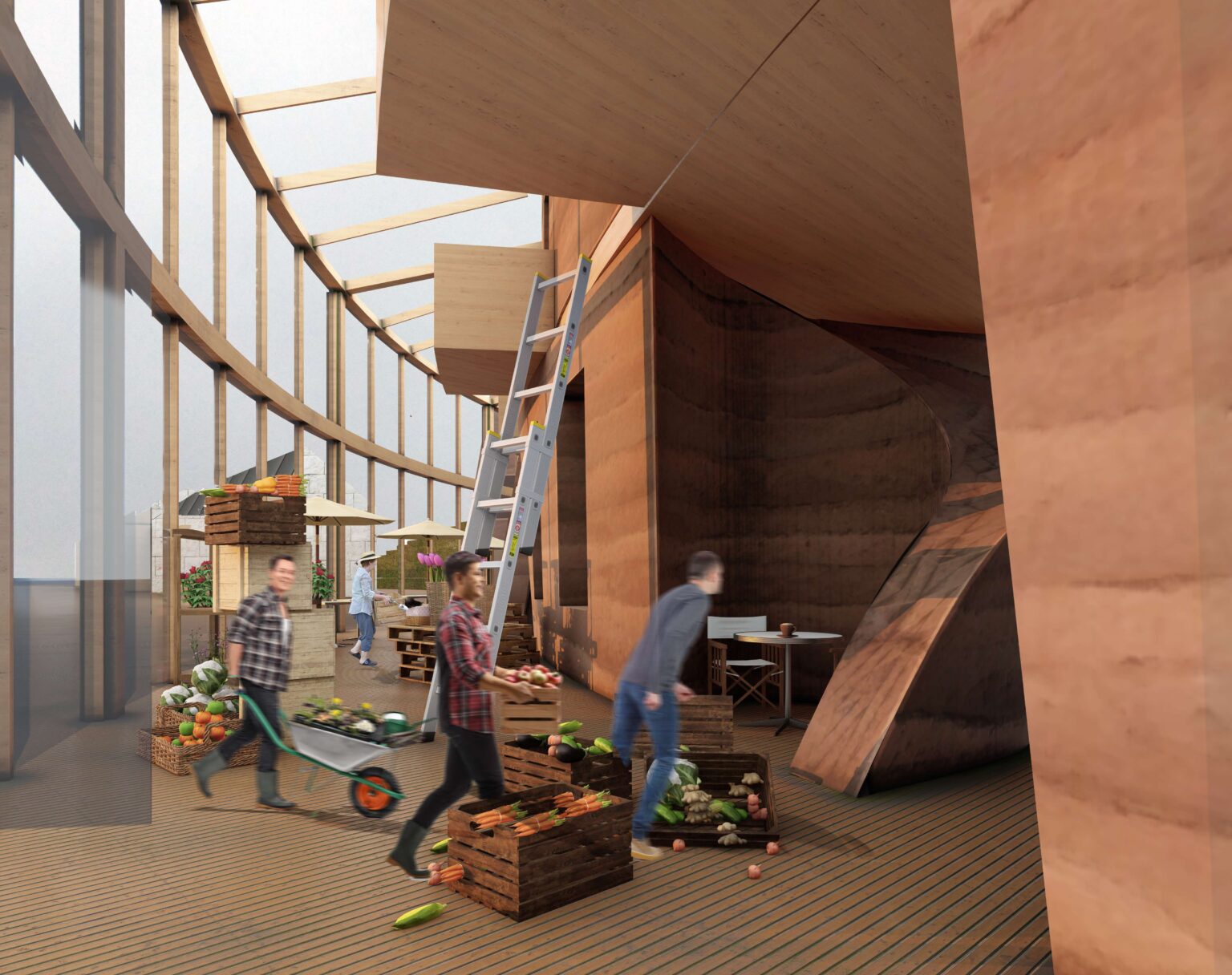 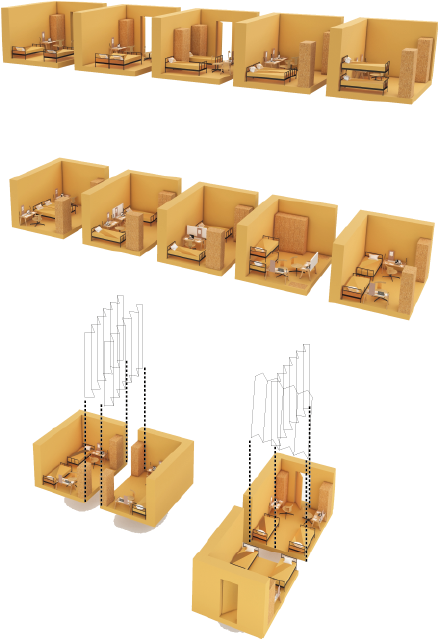 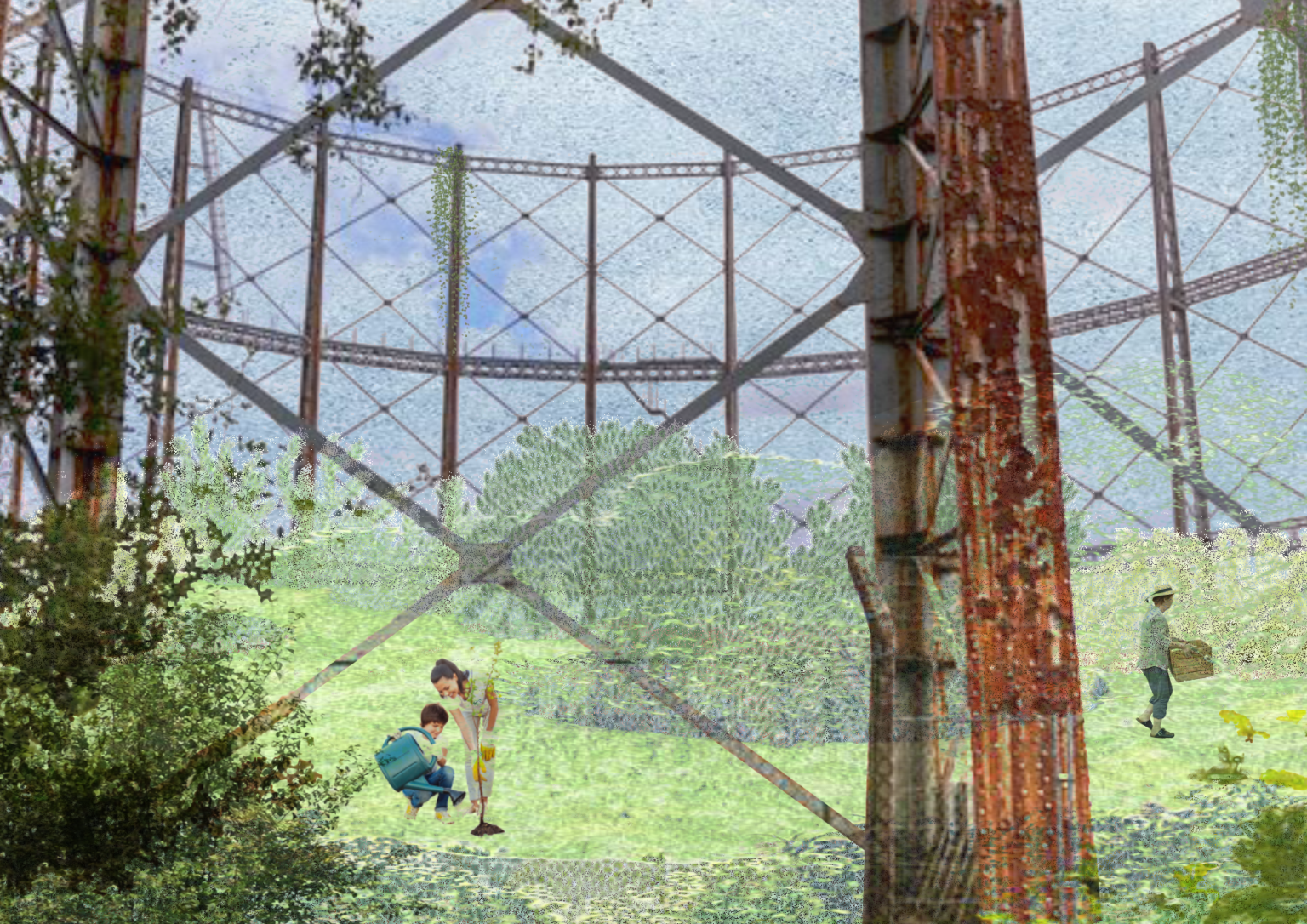 Reusing is an important attribute of sustainability. An abandoned site with structural facilities calls for reimagination and intervention. The design brief was for the reimagined farming structure to not touch the ground as the ground is contaminated.
25 of 28
Previous Next
Close 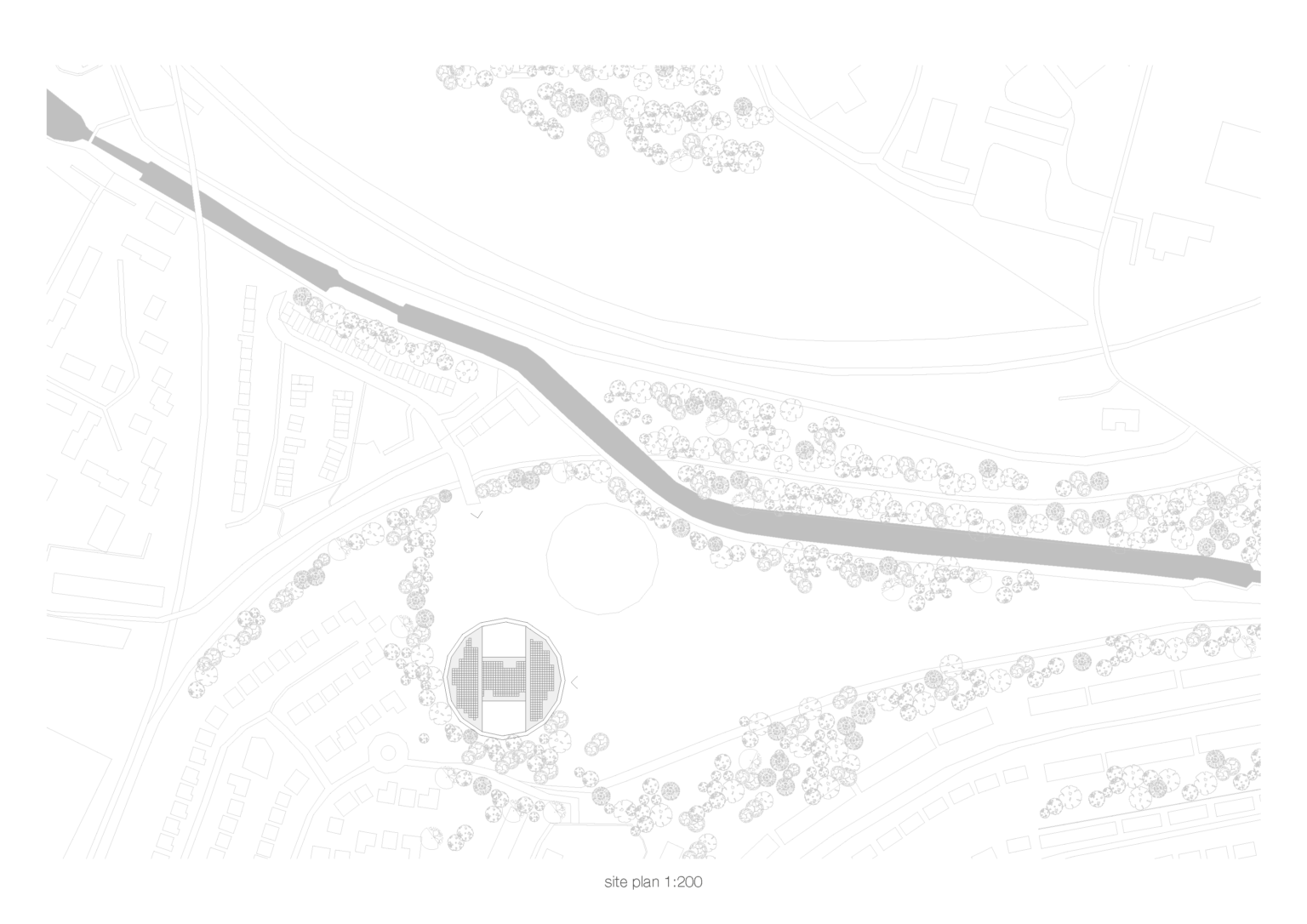 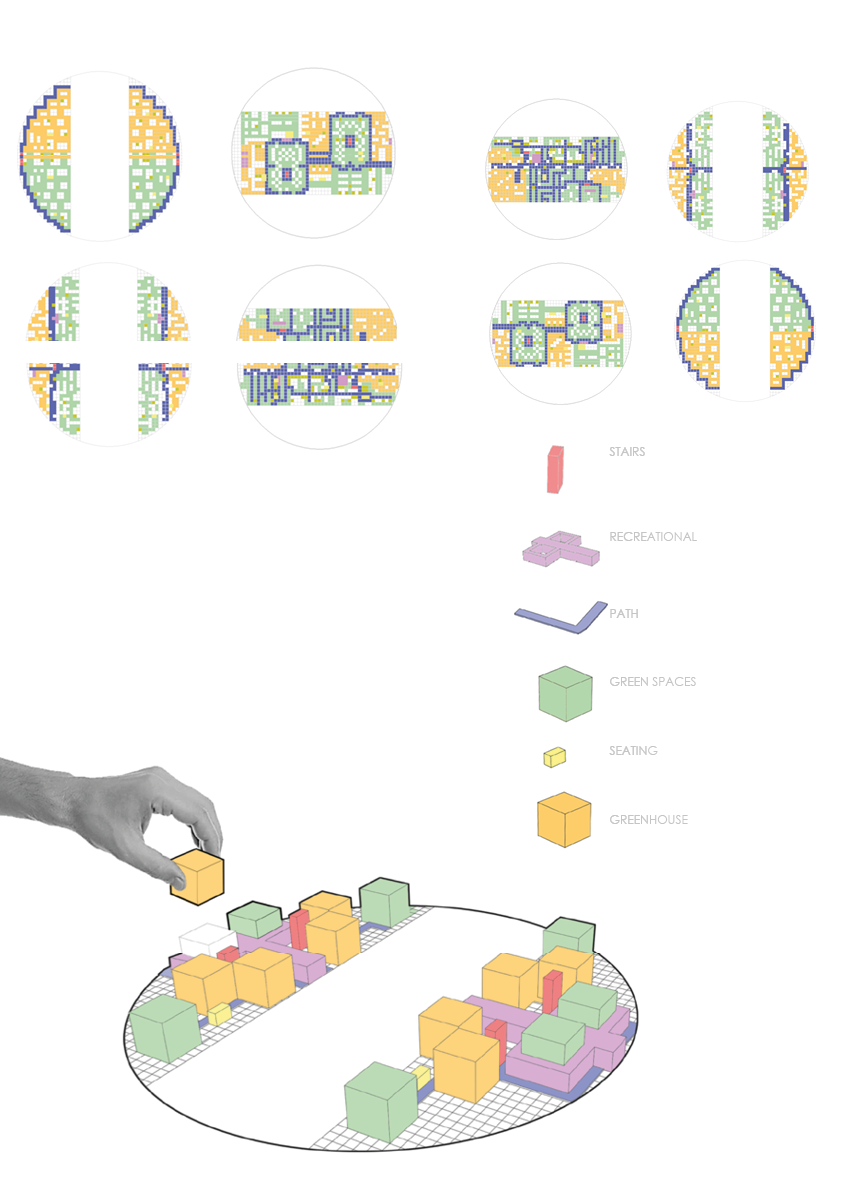 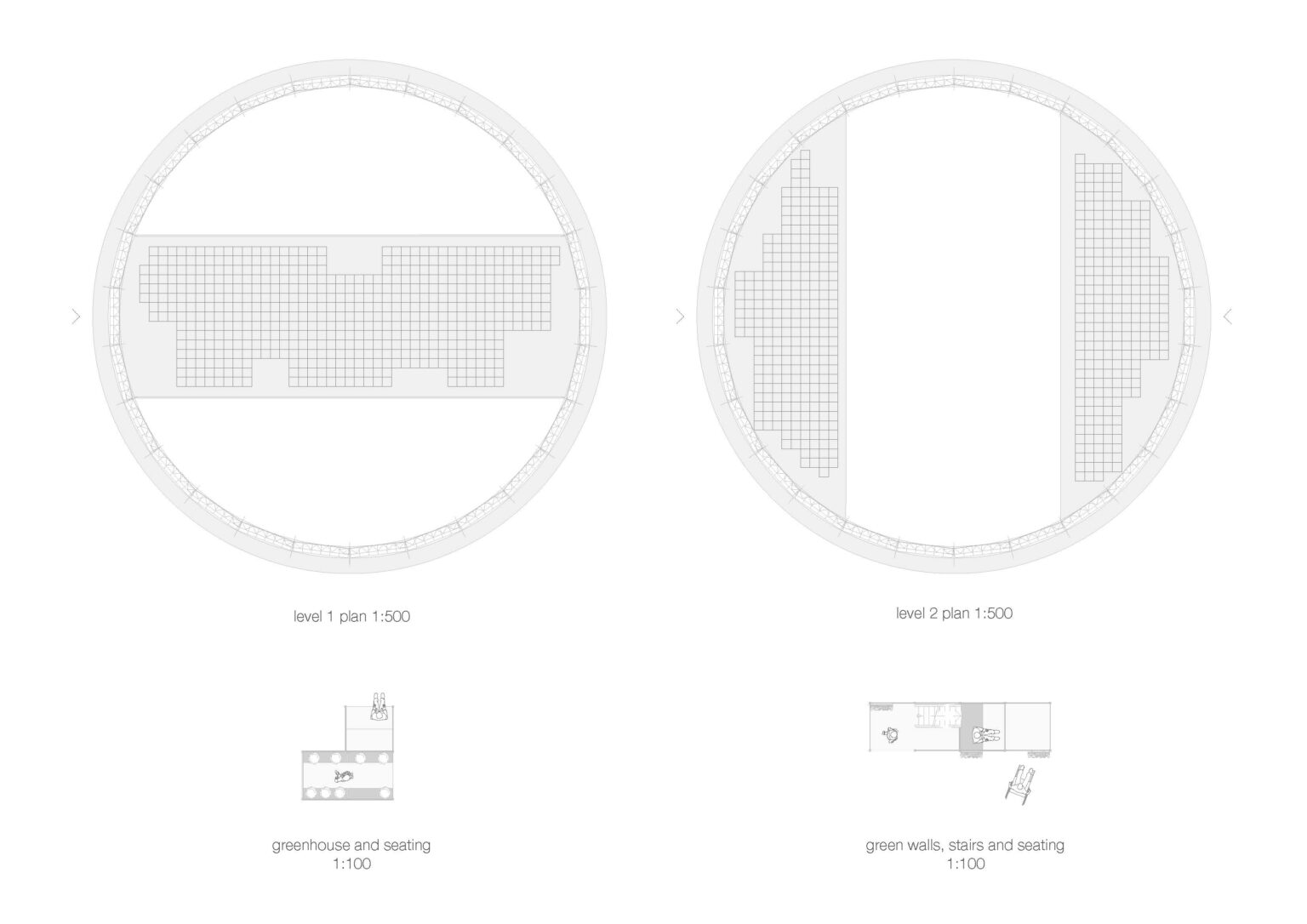