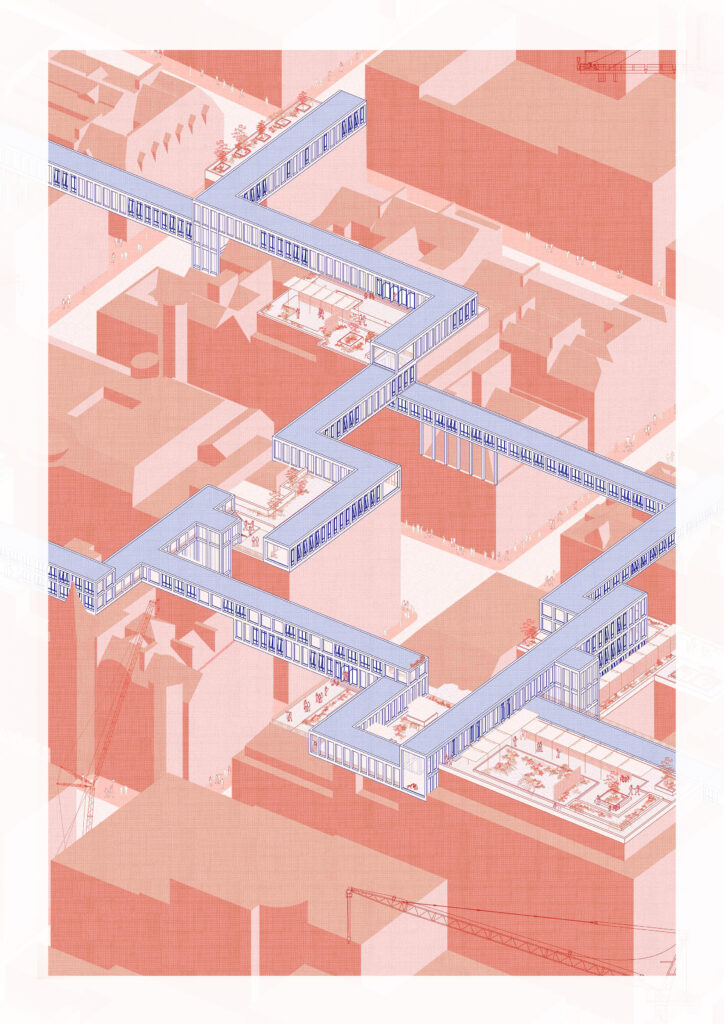 Siripat is a graduate with Diploma degree and Bachelor with Honours in Architecture from the Mackintosh School of Architecture, Glasgow School of Art. Following her one semester exchange at the Accademia di Architettura di Mendrisio in Switzerland in 2018, she proceeded to work for one year at Rahbaran Hürzeler Architekten, a small architectural firm based in Basel, Switzerland.

For her final year thesis project, Siripat explores the speculative future of resilient urban development, where her interests are evident in various aspects throughout. With close consideration to the existing contextual identity and the awareness to the increasing urban density, the project seeks to minimise demolition and advocate for a more inclusive usage of urban space. As an open-ended provocation to the possibility of alternative urban growth, the project aims to enrich the intimate, everyday life interaction within the community and enhance a sense of local ownership and comfort towards the city. Through extended public realm, placemaking design, and experiential localisation; a vibrant, human-oriented, sustainable urban scape is envisaged, infilling the void between the old and the new, the city and its dwellers – a symbiotic vertical growth along the city of Glasgow’s roofscape.

The Urban Mantelpiece is a speculative response to the the consequential effected of population displacement due to the predicted mass Climate Migration of up to 1 billion people by 2050. The thesis explores the future of sustainable development within hyperdense urban areas by investigating the possibility of building on top of the already existing urban fabric – alternative to merely building new taller towers. It requires no major demolition or exploitation of natural landscape, as well as conserves urban identity. The symbiotic proposal is an elevated urban infill, enhancing the value of community by connecting the old with the new.

With a historical capacity to receive more inhabitants, along with bearable future climate and surplus water supply, Glasgow will become one of the main destinations. Therefore, by speculating Glasgow as a hyperdense urban area where a massive portion of the population are displaced from home, the thesis also explores the underlying psychological issue of Homesickness – feeling displaced and a lost sense of belonging.

Using the metaphor of a Mantelpiece – every household’s furniture of sentiment, the thesis muse on the play of nostalgia and the city’s spirit of place. The proposal observes the life of the city as it goes by, while at the same time shelters the memories inhabiting within. Instead of eclectic figurines or picture frames, curated on the Urban Mantelpiece are a series of different states of mind a person might seek in order to comfort the psyche. They are attended to through different experiential spaces and activities – from intimate reunion, blissful rest, environmental hideaway, mindless wander, mental escape, social engagement to blinded distraction.

Entering from back laneway up through vertical core, not only the proposal reactivates the underused urban space but also induces a sense of child-like discovery and local ownership. Coming out above the skyline, the Vierendeel truss structure edges along the existing built fabric, atop the growing urban enormity. The proposal is an extended public realm that offers a space to both socialise or be in solitude.

Serving as an anchor for the local community, the proposal is even more so as a localisation of new memory – embedded in between the skyline of monuments and vistas. The Urban Mantelpiece is an alternative mind sanctuary that aims to relocate a lost sense of belonging by cherishing and celebrating memory, the present and the inevitable change and creating new connections between the city, the city dwellers and the horizon beyond 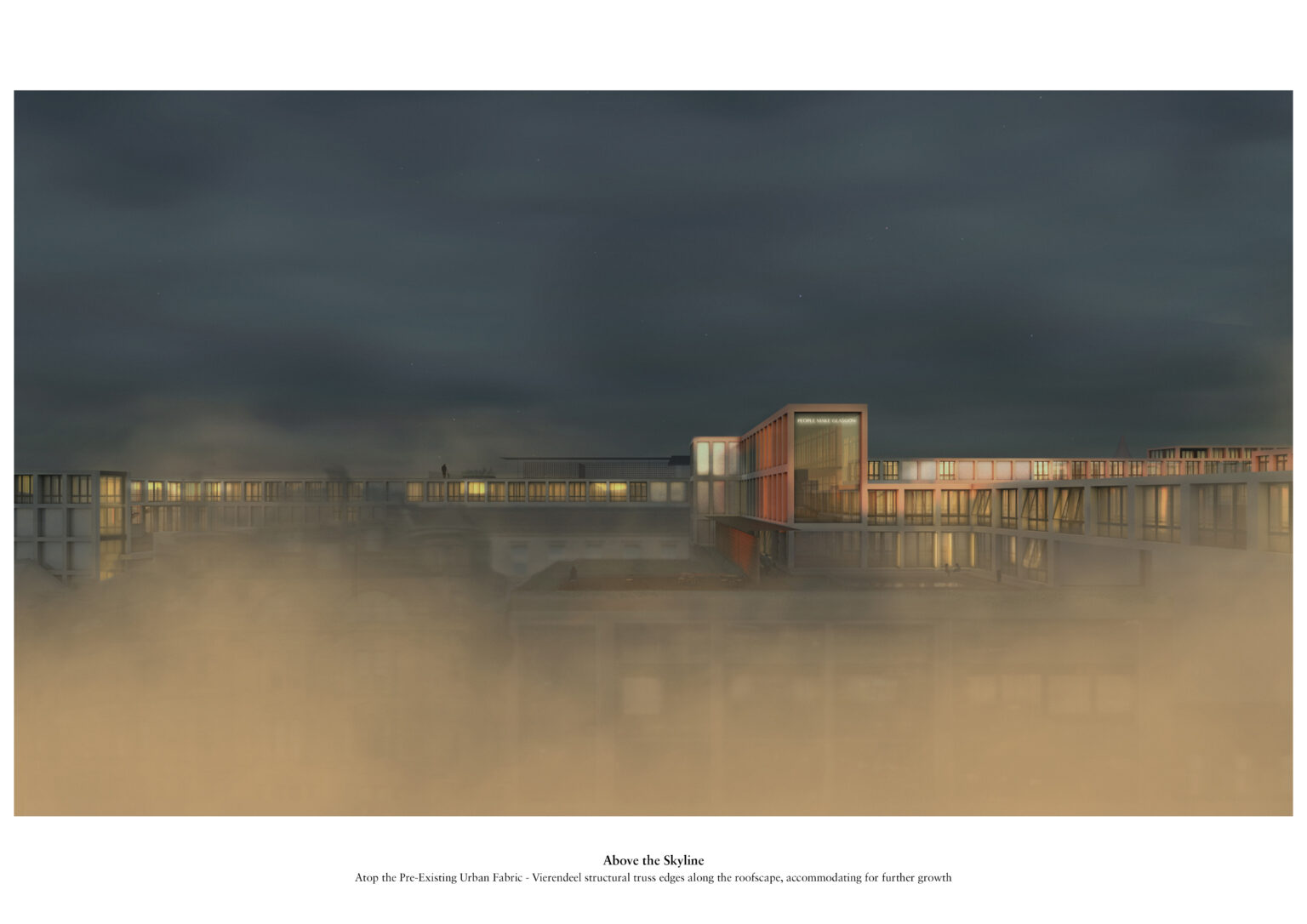 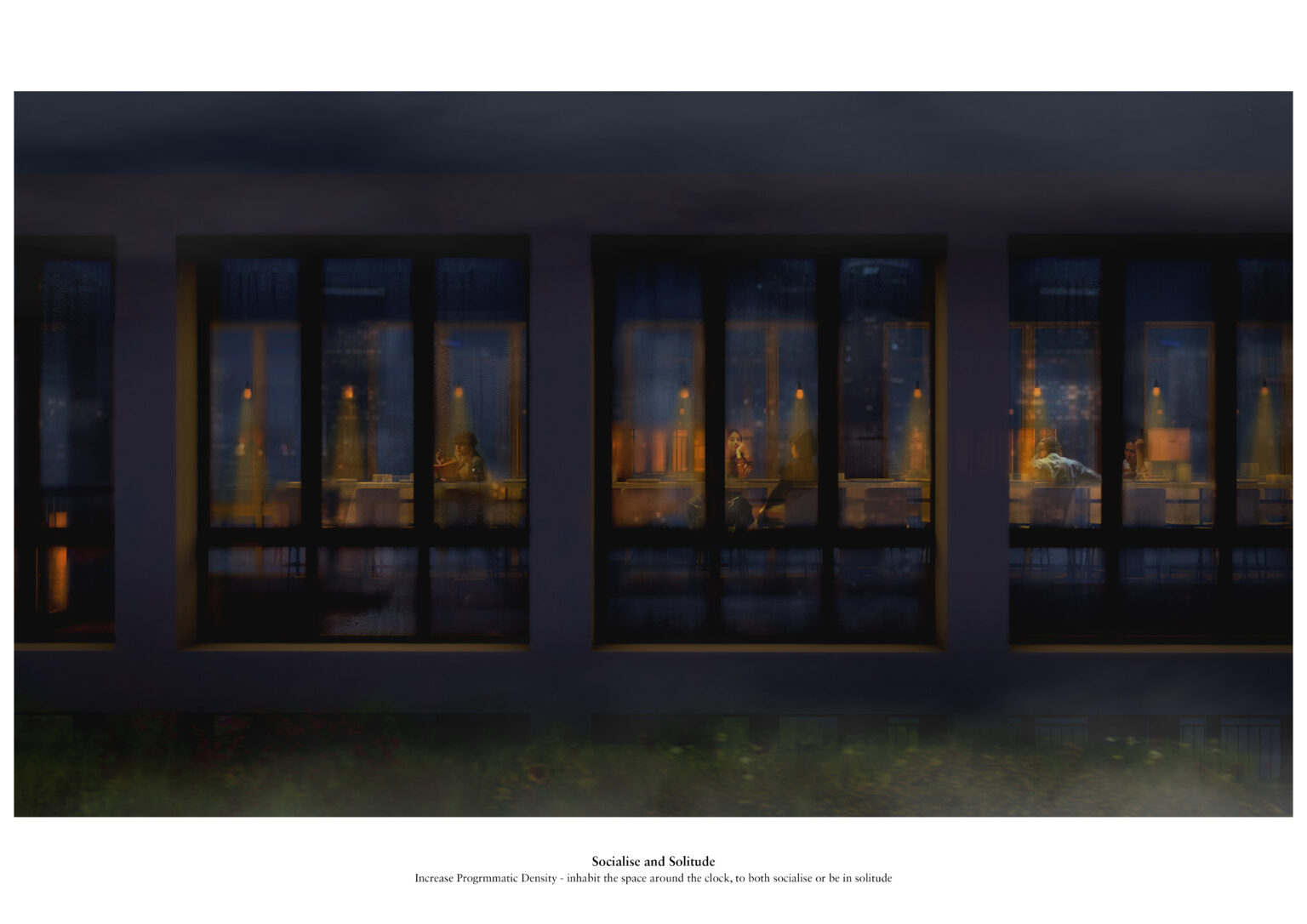 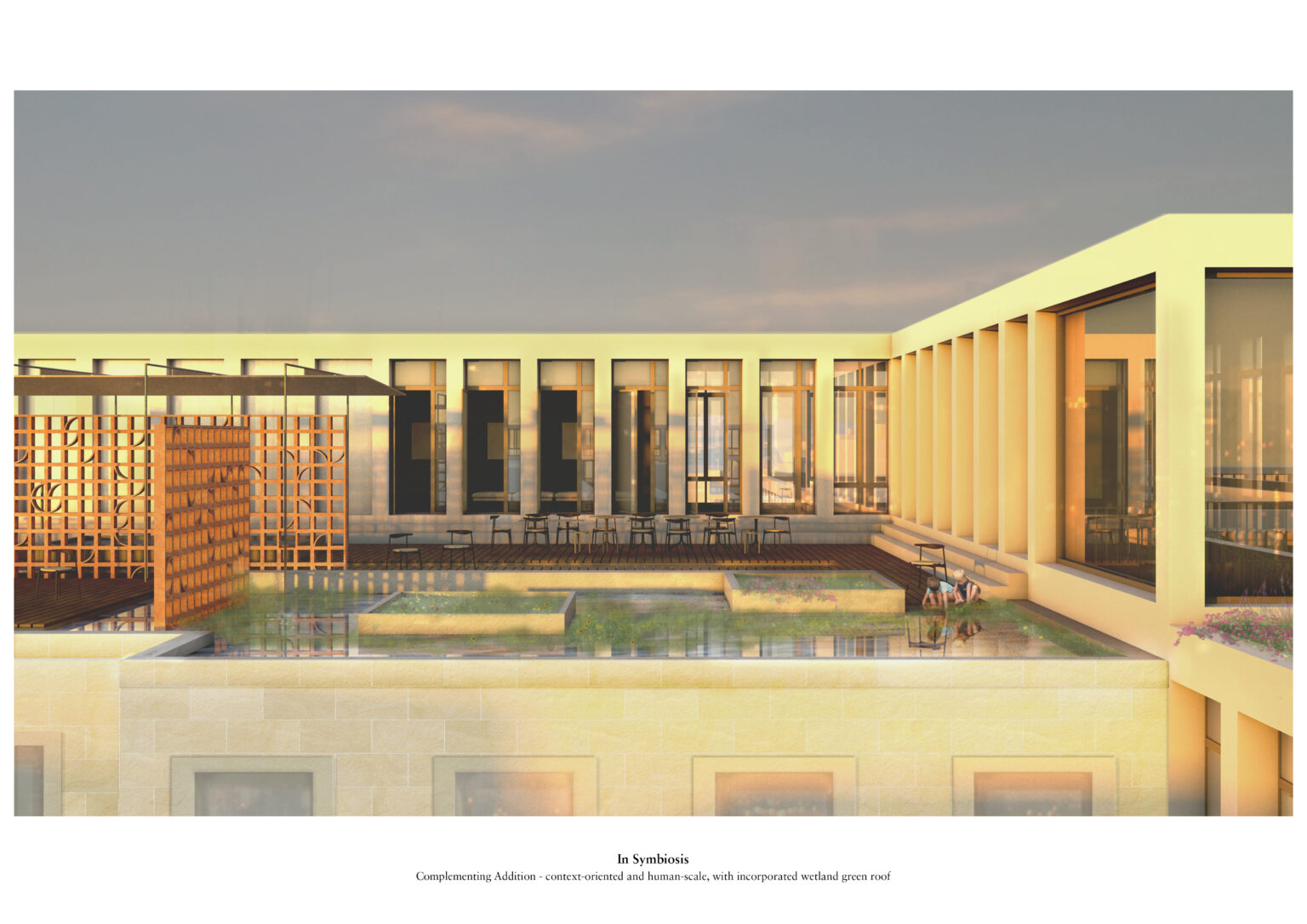 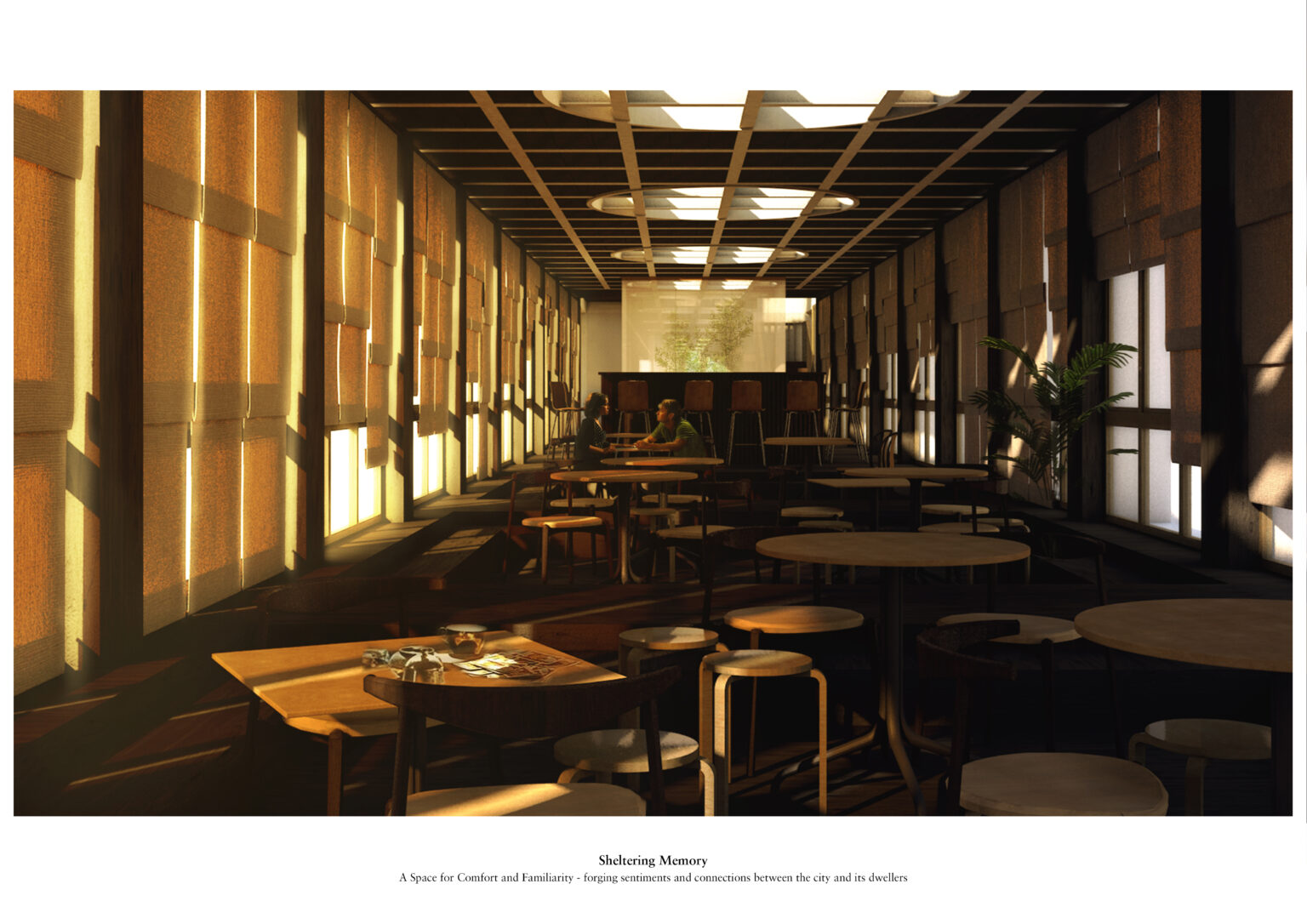 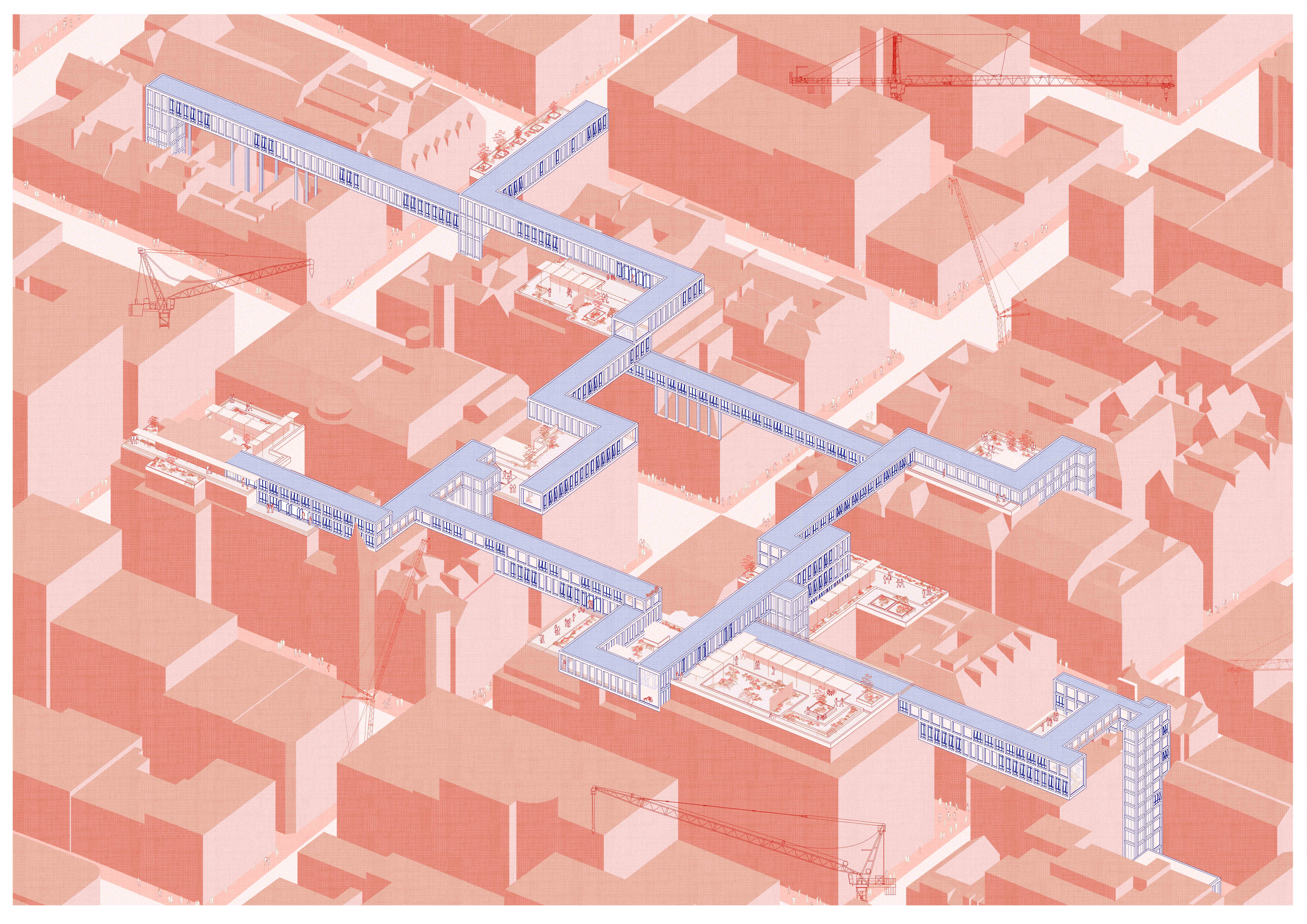 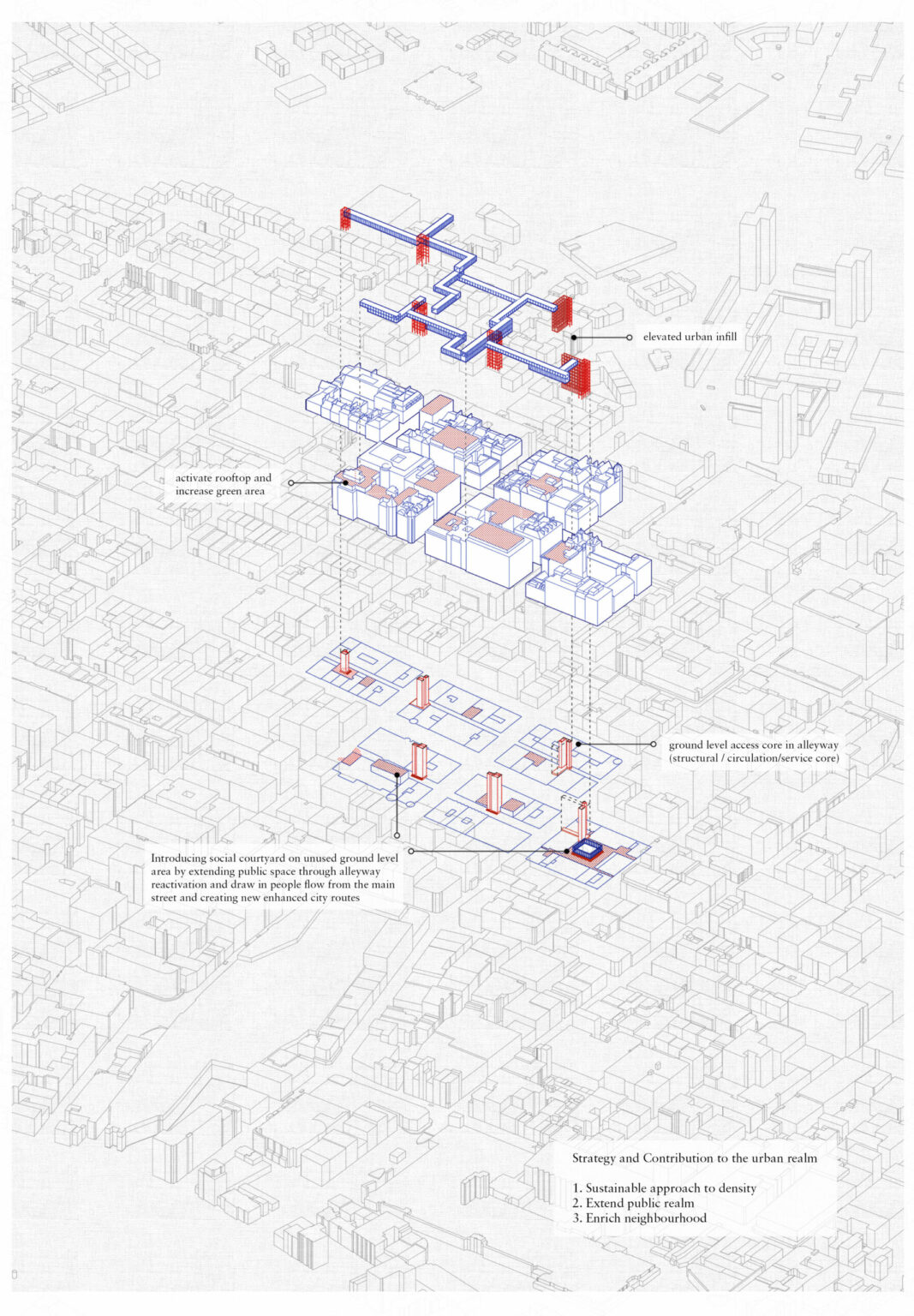 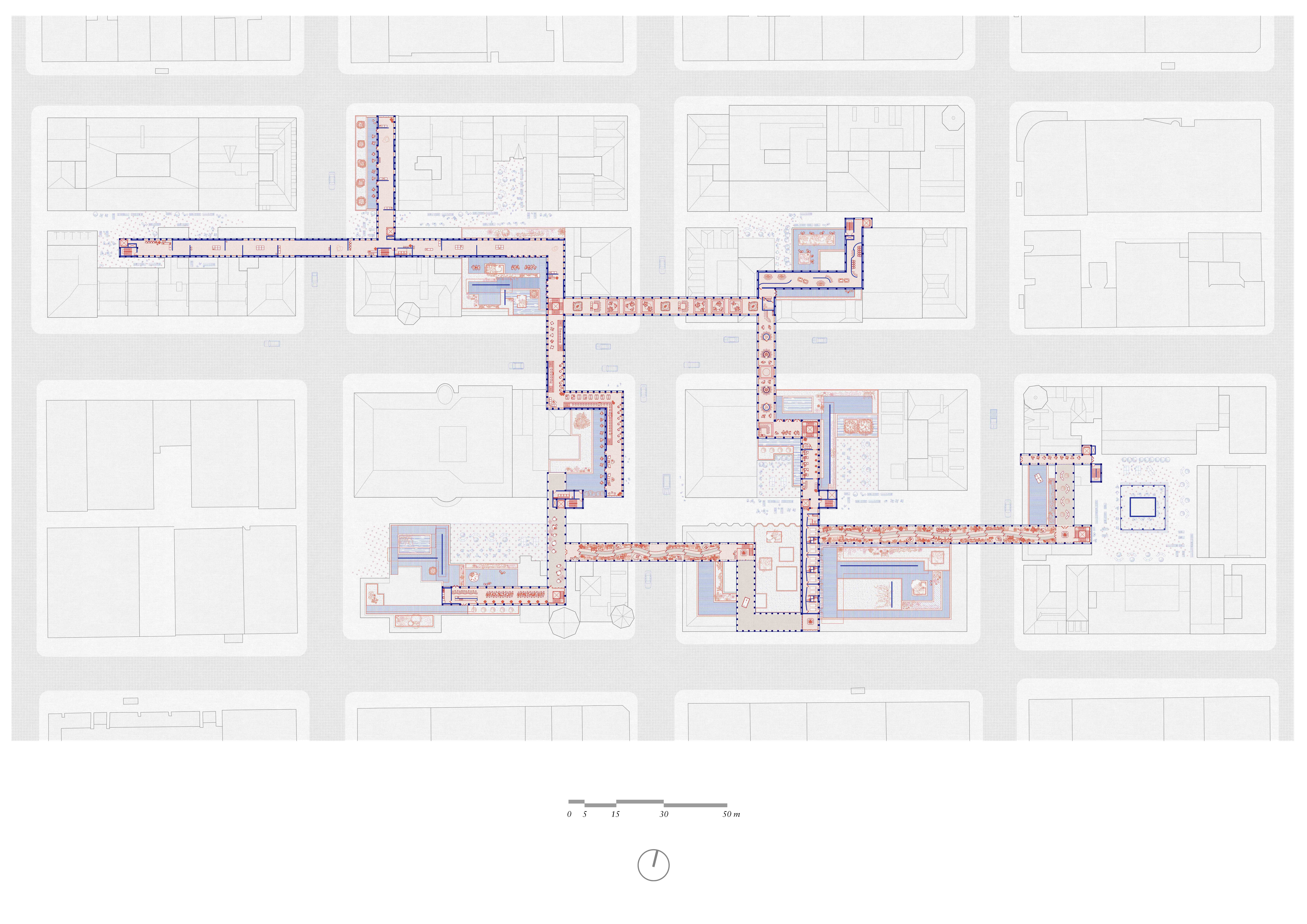 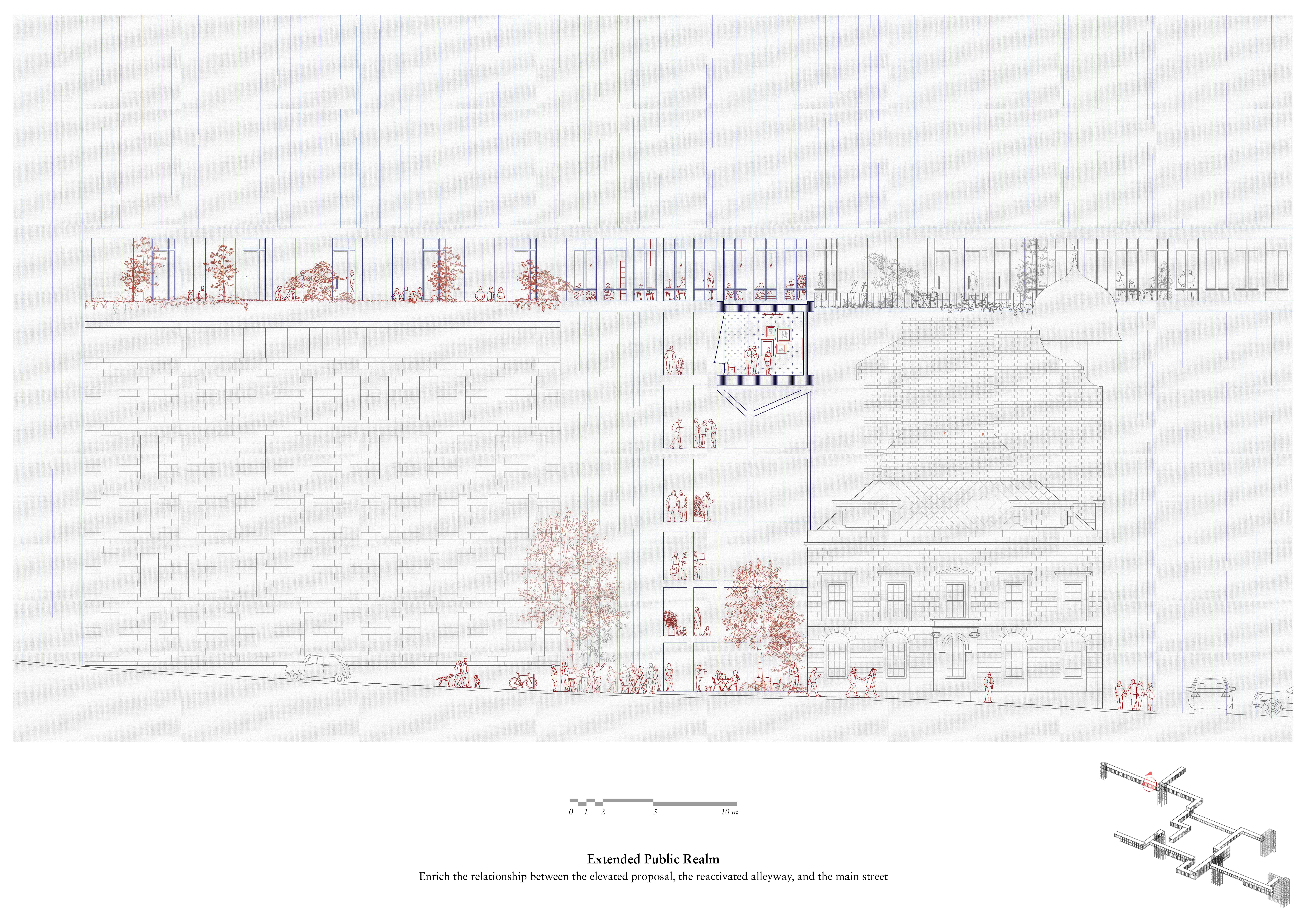 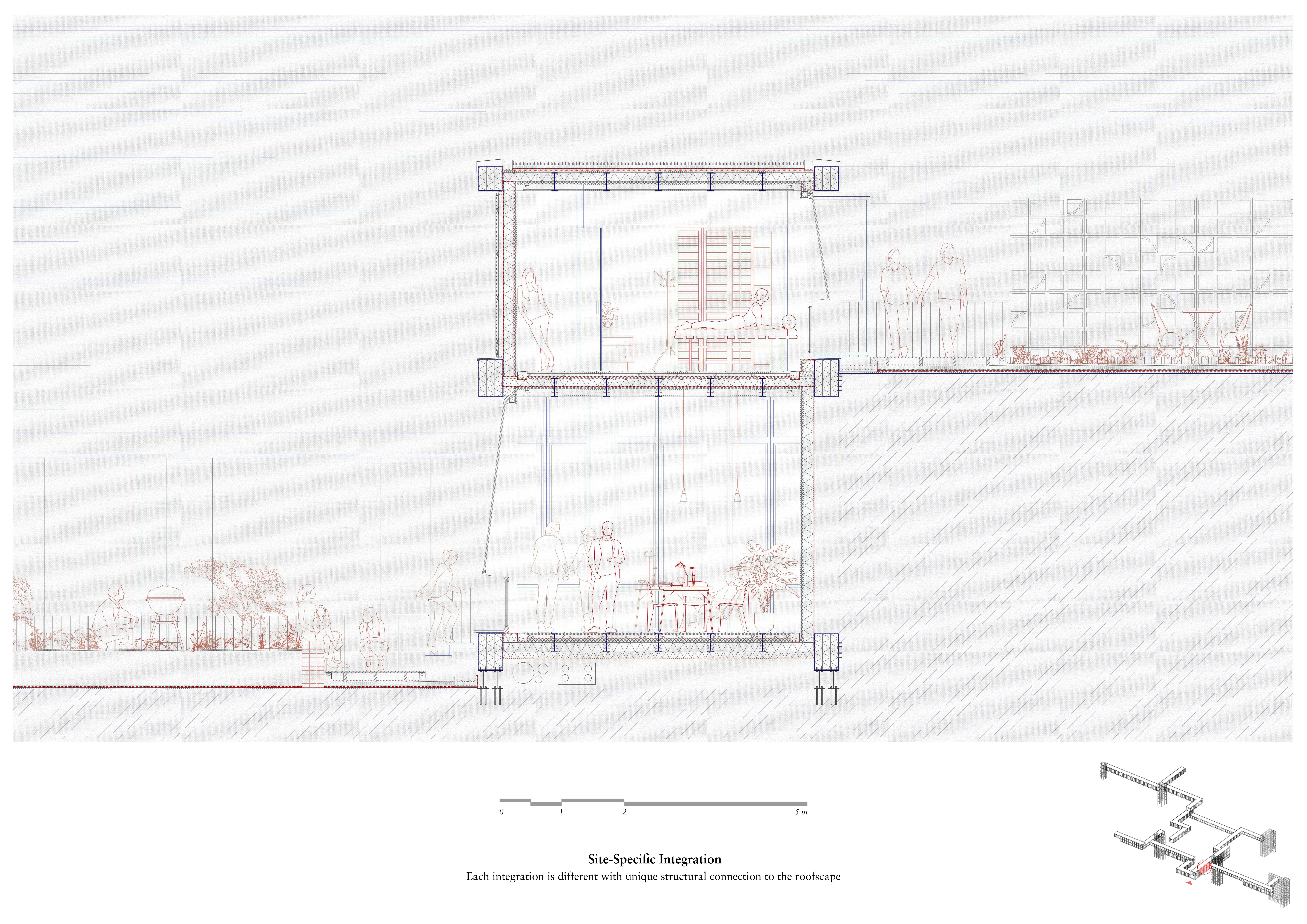 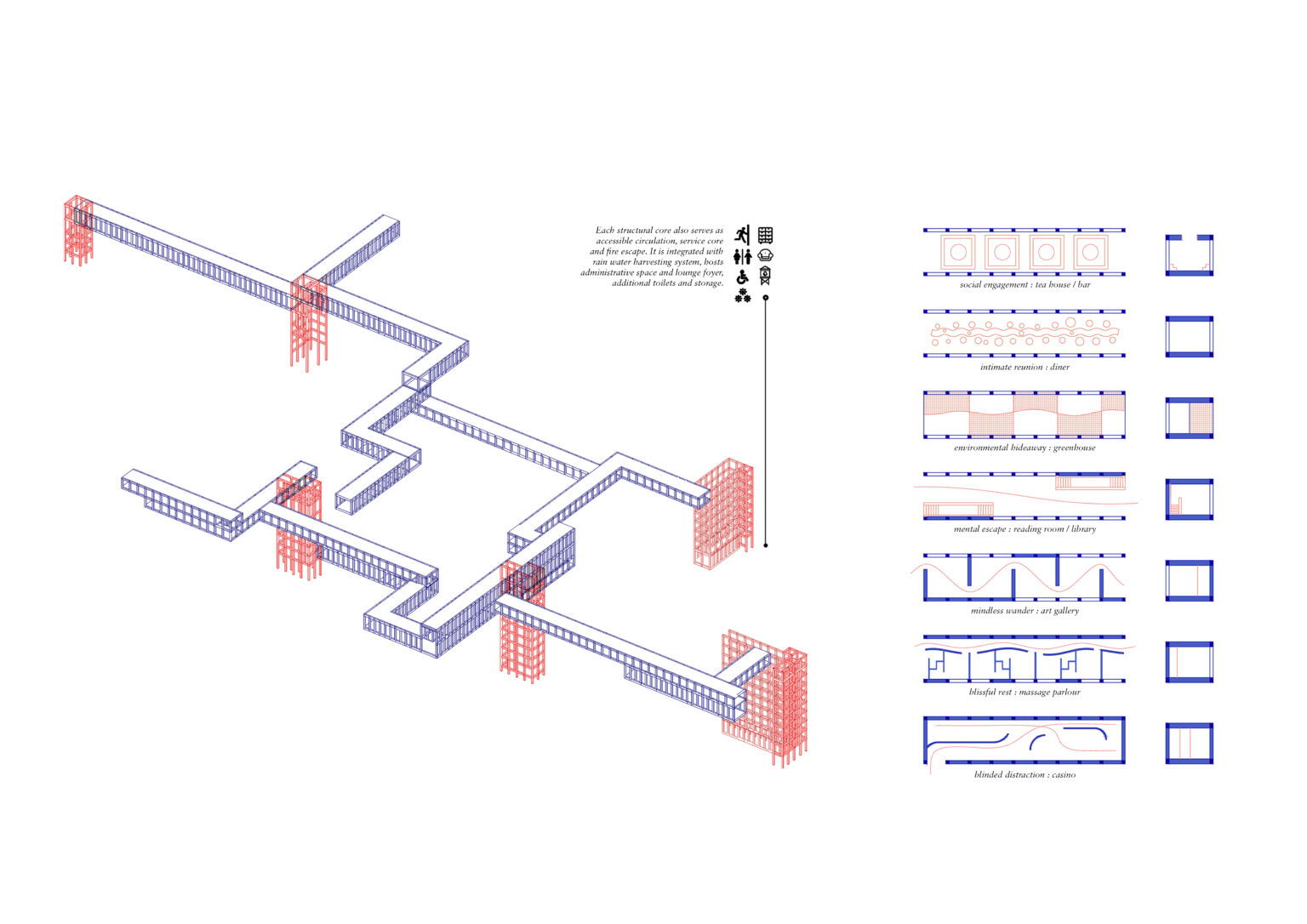 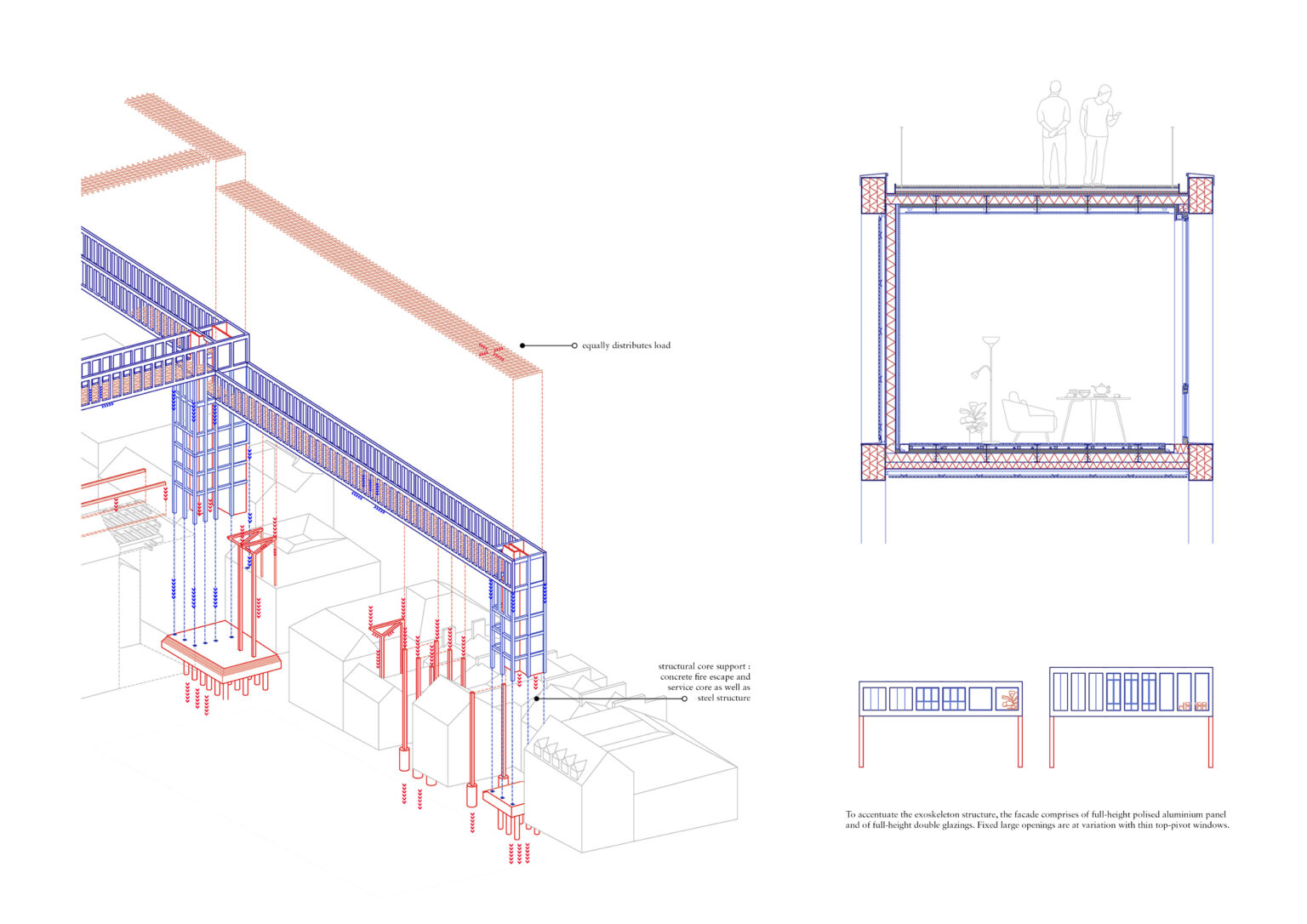 The Prestige – a stage for clowns

The project is a satirical architectural manifesto that explores a paradoxical space where the Government, as a symbol of authority and power, collides with a Circus. The proposal examines the relationship between two radically different groups of activities with the aim for clowns in all sorts of sense to co-exist simultaneously in the same, parallel space. The study initiated from common traits found between the two entities. Behind the marvelous, pristine facade and their promised wonder and joy is a corrupted core and unethical cruelty.

Through conceptual ideas of rational space and structural organisation, the political symbolism and humour is translated into an architectural form of solid brick structure. The non-hierachical facade with no back or front is a quiet gesture of visual illusion formed by the twisted and layered structural archways. The sequences of colonnades create a slow suspense around the towering central silo monolithic singularity.

The main acts, either it being a political debate or a performance of an illusionist, are hosted in the silo. The spatial plan originated from the idea of a three ring circus with each ring collapsing into each other. In the main performance space on the first floor, each ring can be separated with movable acoustic walls if needed. This adaptability facilitates both politicians and actors to perform simultaneously, overlay and echo each other. The interior of the silo is a dream-like space that mimics a silhouette of a circus tent – shaped with the suspended internal lightings and hanging fabric from the floor above like a puppeteer stage hovering over the audience. 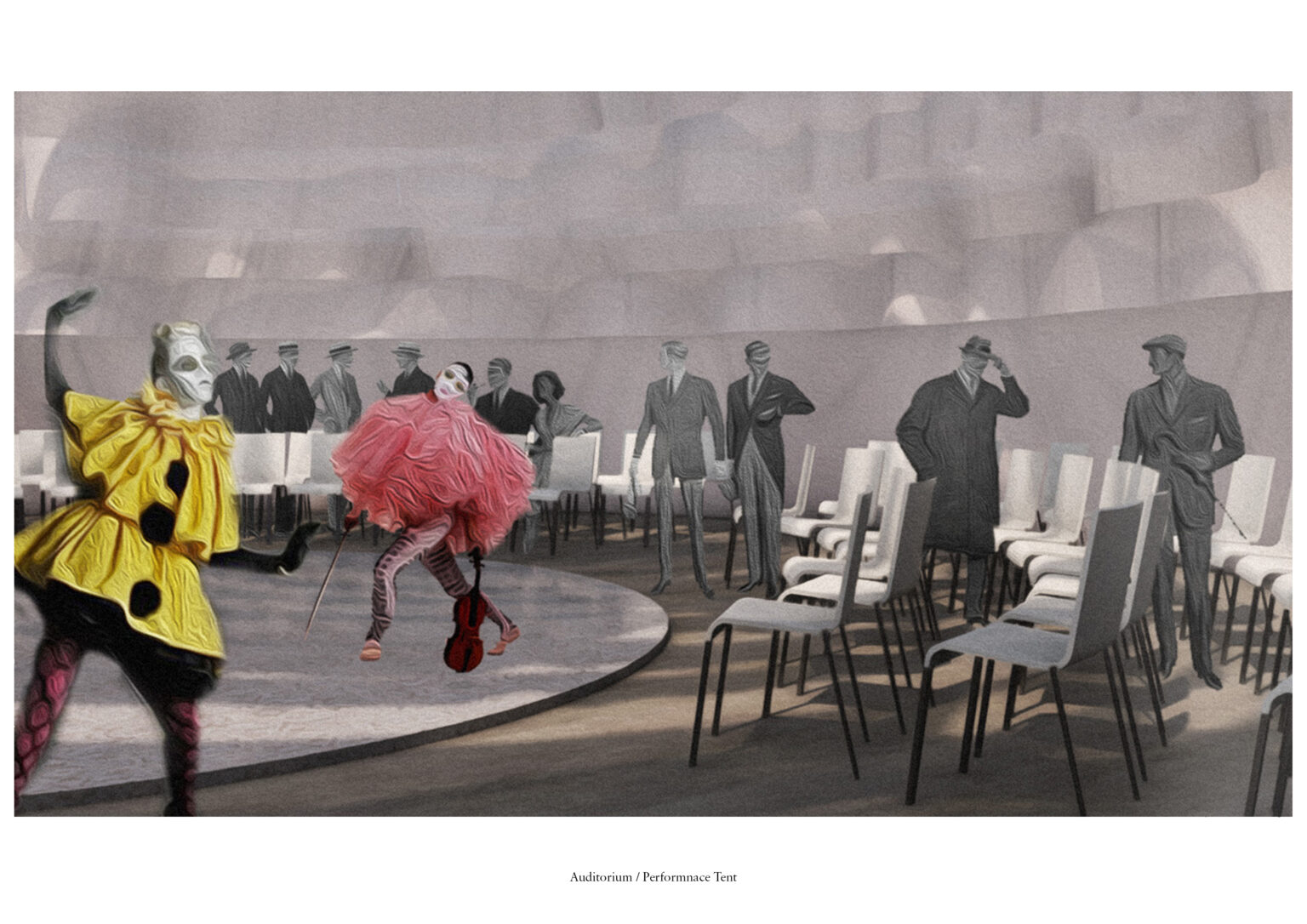 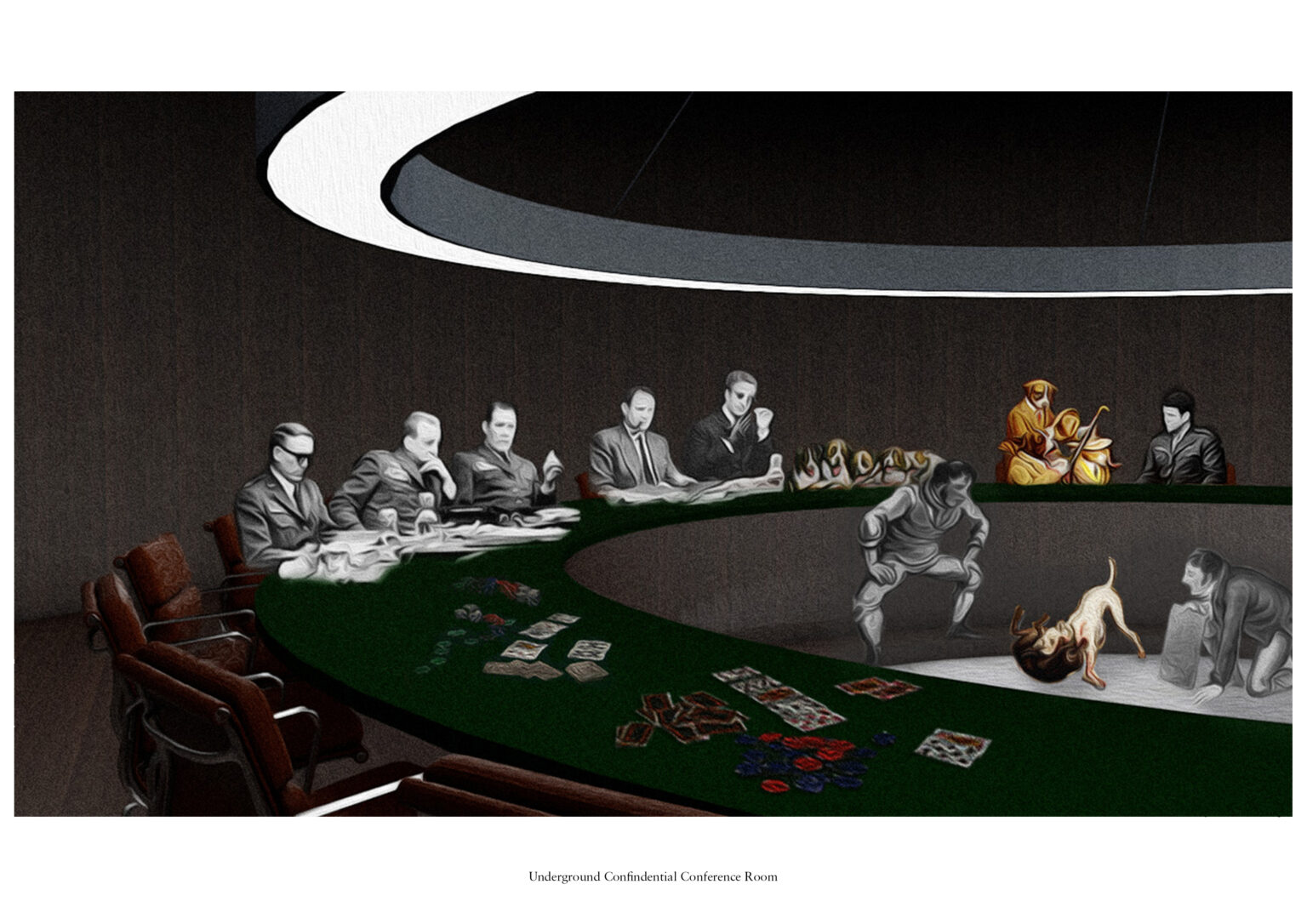 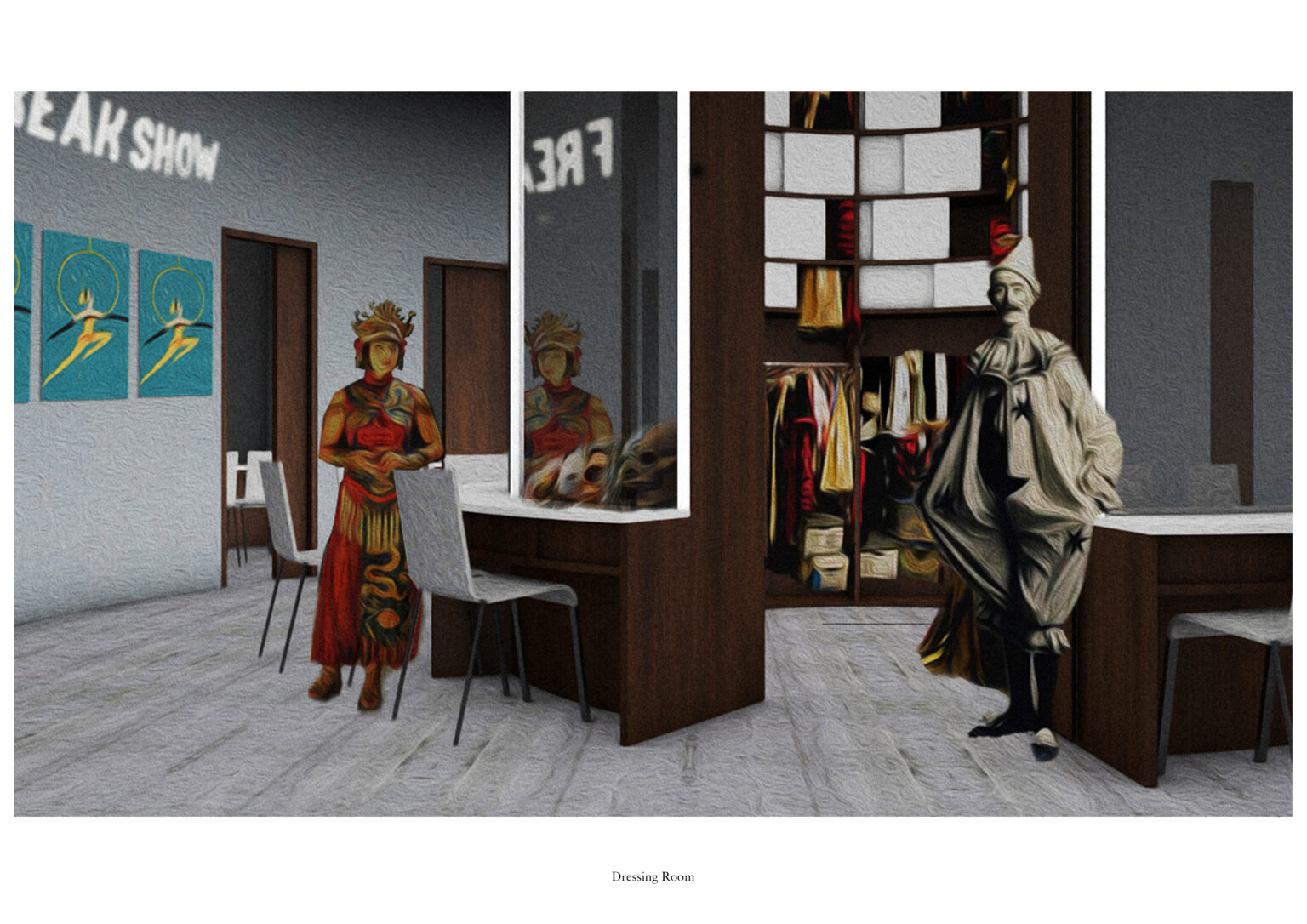 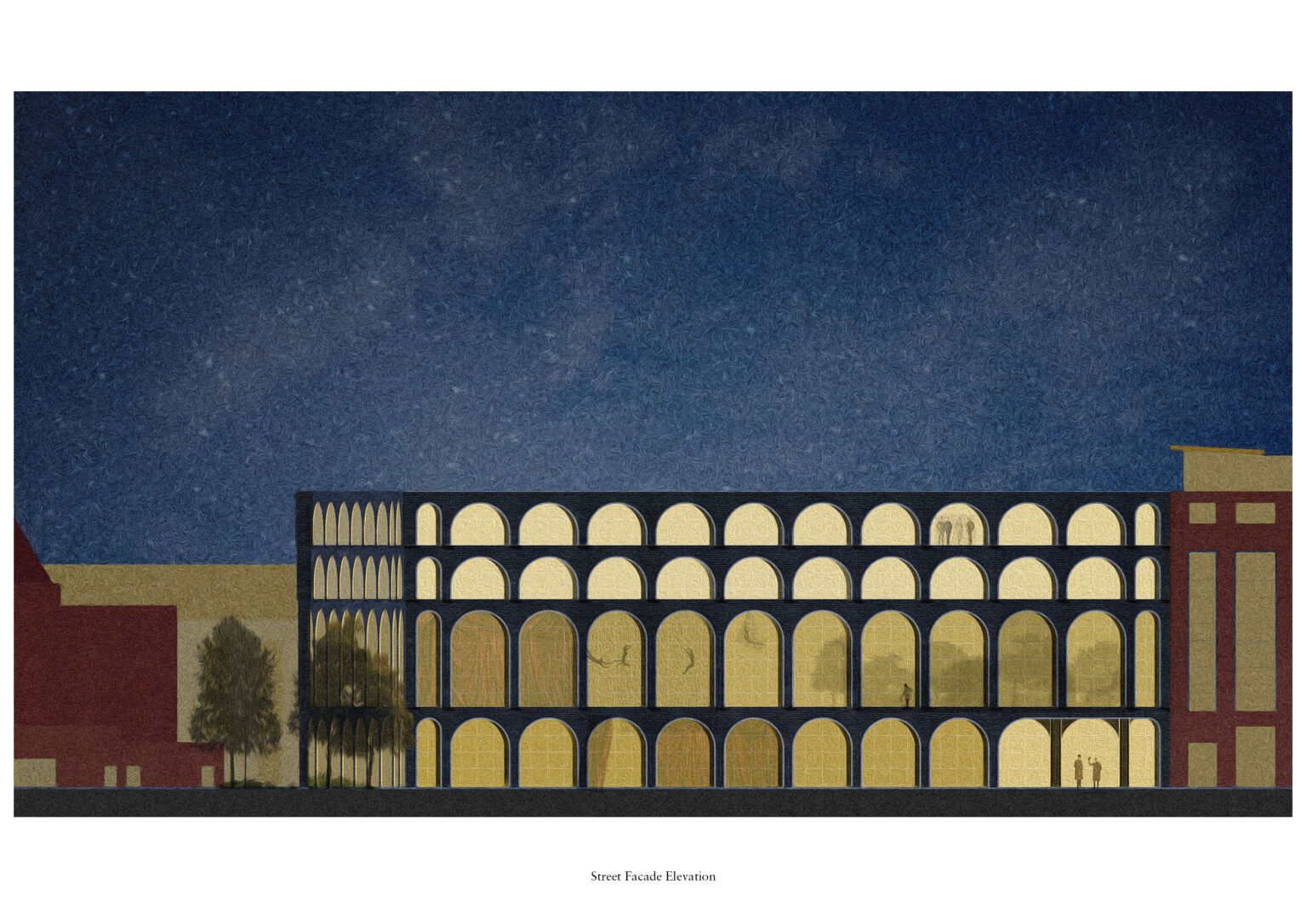 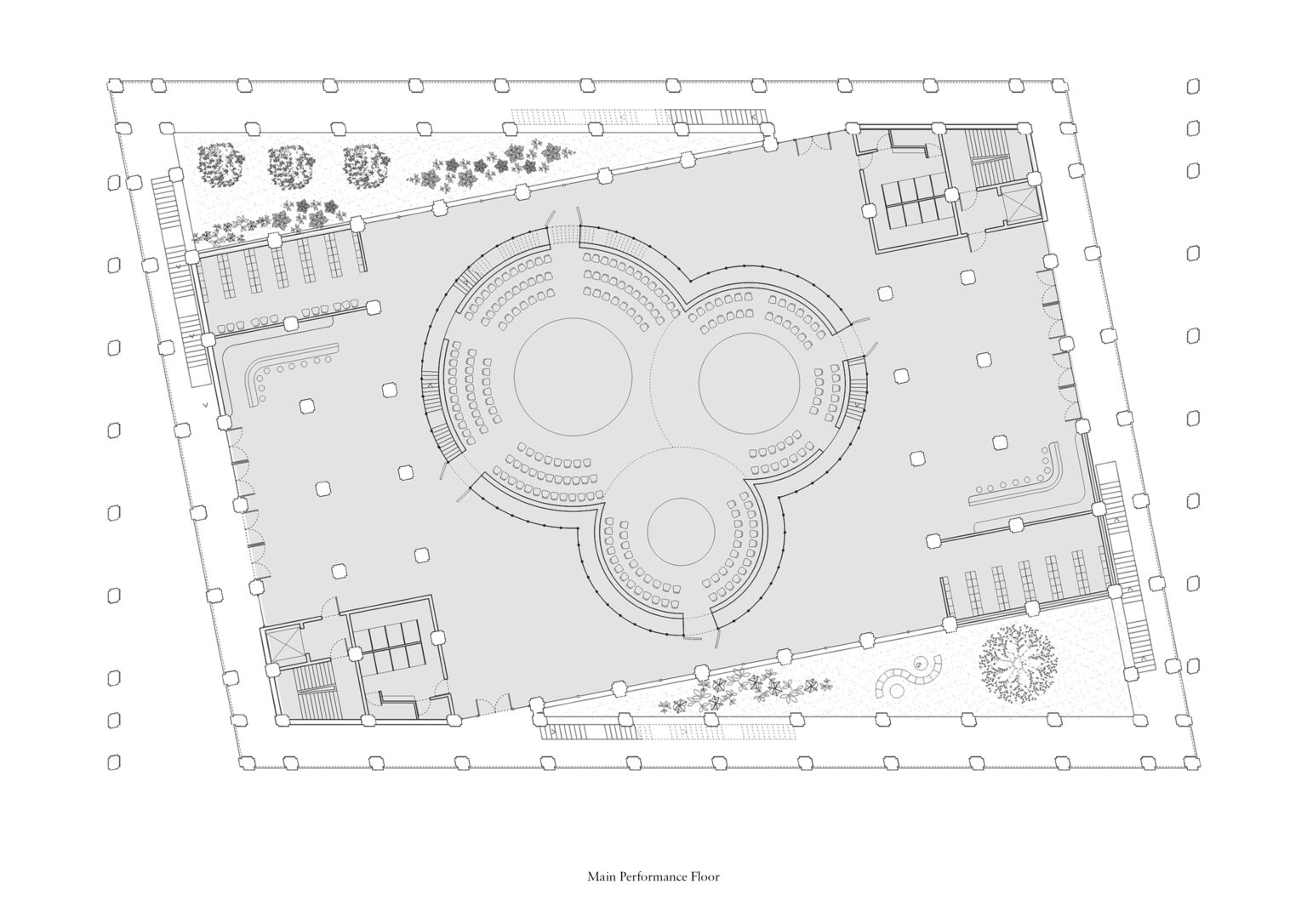 A Home Meant to be Left

In the era of globalisation, the idea of settling down has become less popular. On the other hand, relocations have become more achievable, whether it being career move, better societal change or the glorified nomadic lifestyle and not to mention the threatening Climate Migration. With people becoming more used to the changing environments, values in life have shifted. What was once perceived traditionally as stability, is now mediocrity.

This residential project explores the notion of designing a Home that is meant to be left. The analysis is approached through the use of connectable-unit typology on the basis of adaptive permanence and temporality. Free to connect multiple units together, the capacity of each living household is adjustable. The shared garden is filled with natural light at the central atrium, around where the units are radially laid out and divided by layers of thresholds that are designed to accommodate the fluidity of each person’s personal space. The ground floor is public space that serves as a Resource Exchange Centre, where household items such as furniture, plants or excess food and groceries can be exchange between both the residents and the public. Not only designed to facilitates resident’s relocations but also to reduce wastes and extend product’s lifespan.

At the same time, with the current global pandemic, the discussion of thresholds in a semi co-living environment is more relevant than ever. Despite all the devastating situations the pandemic has caused, we are put into a large scale experiment that could lead to a macro-scale revolution in respect to work-life balance. Should a working space and a living space overlap? Where are the boundaries and limits? This residential playground further investigates the diversity between an individual’s sense of private-public relative to their sense of domesticity-work. 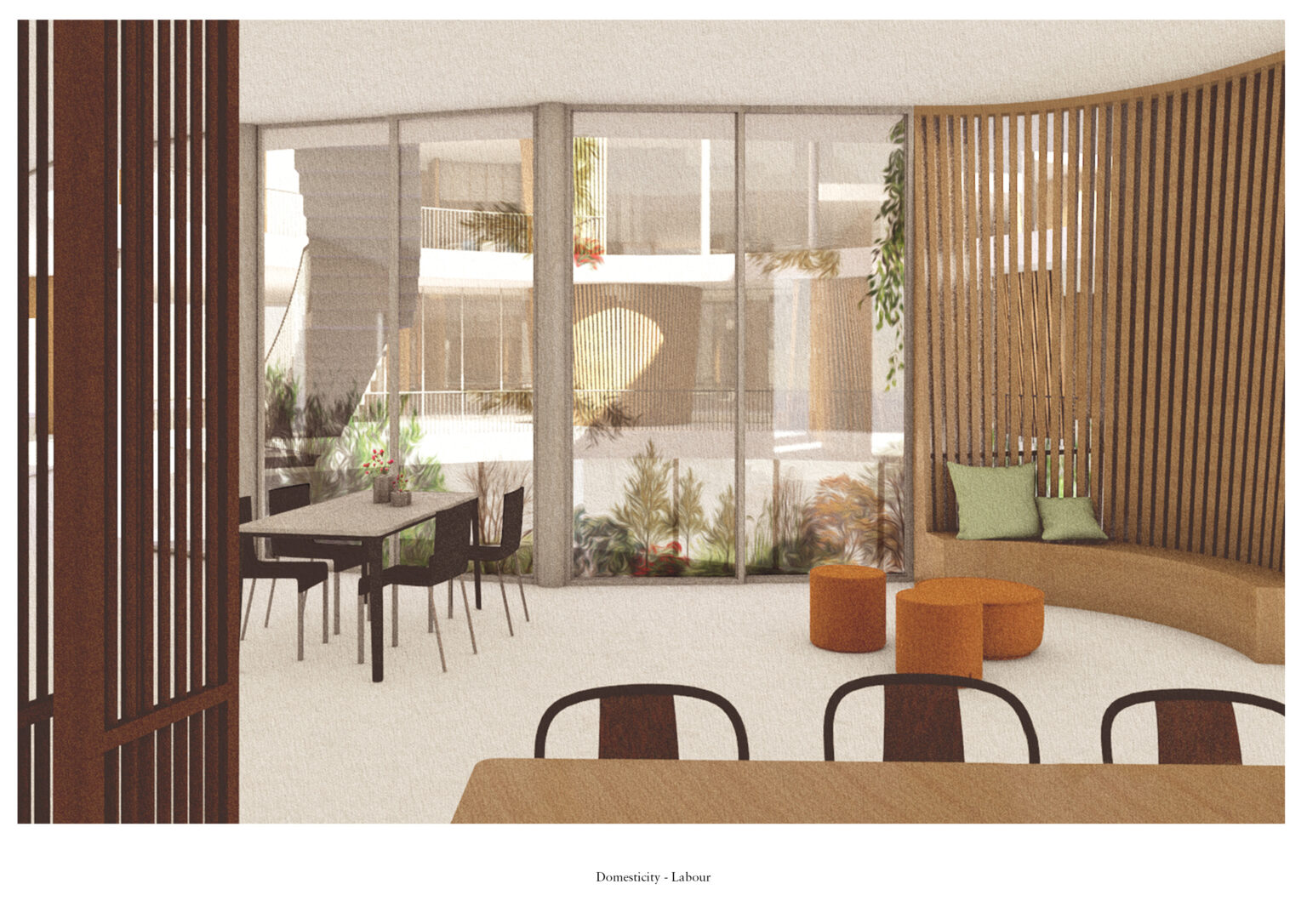 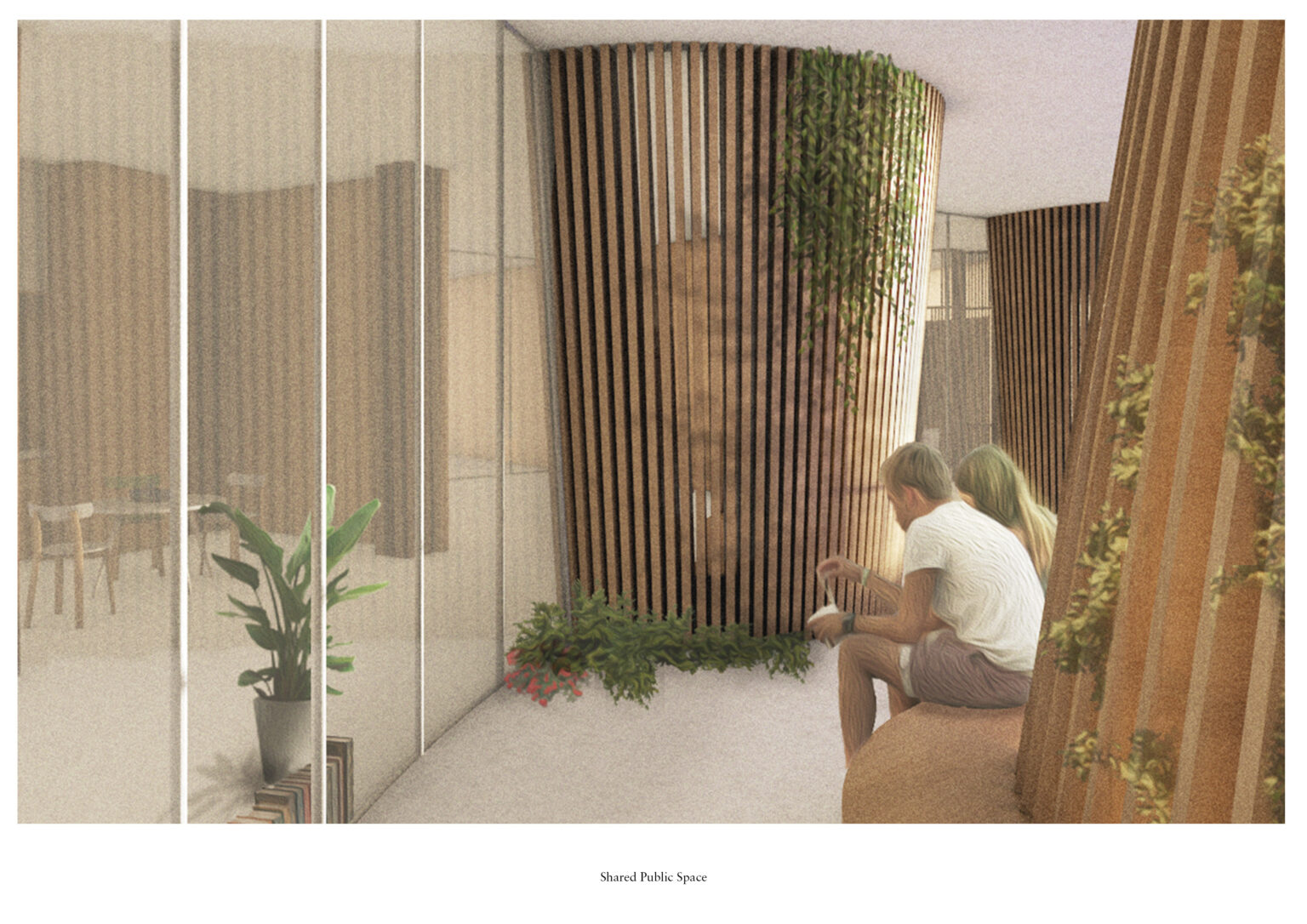 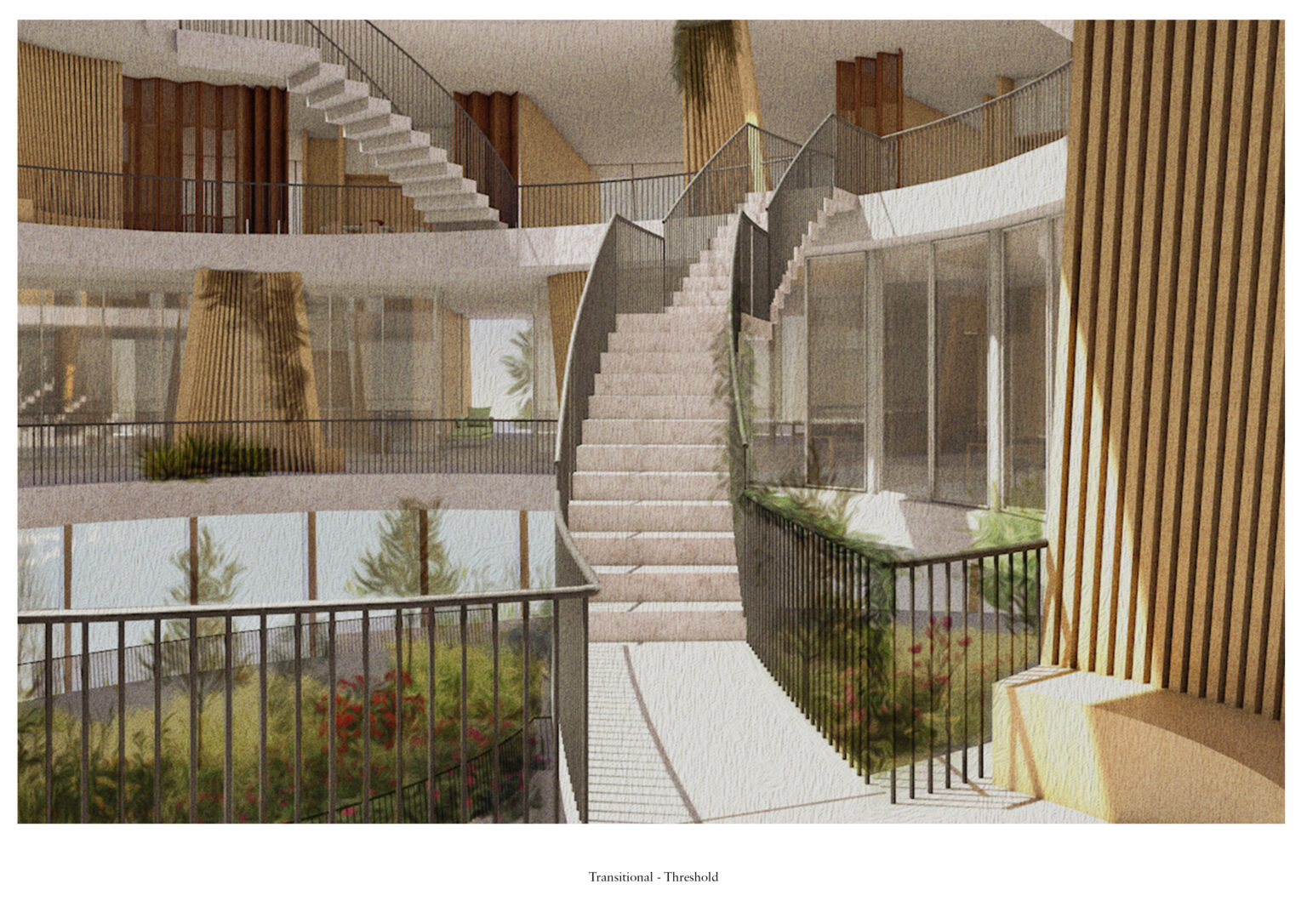 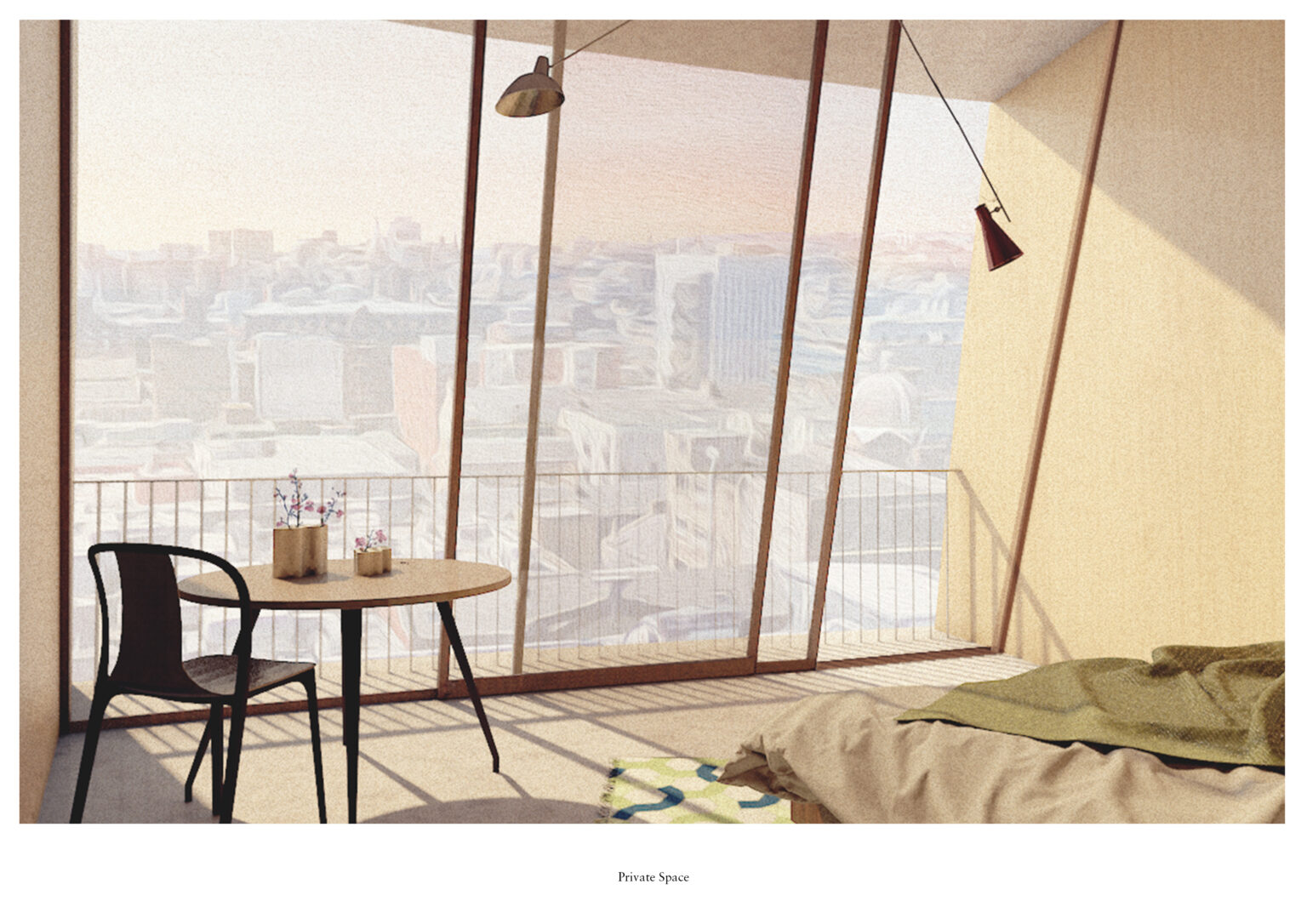 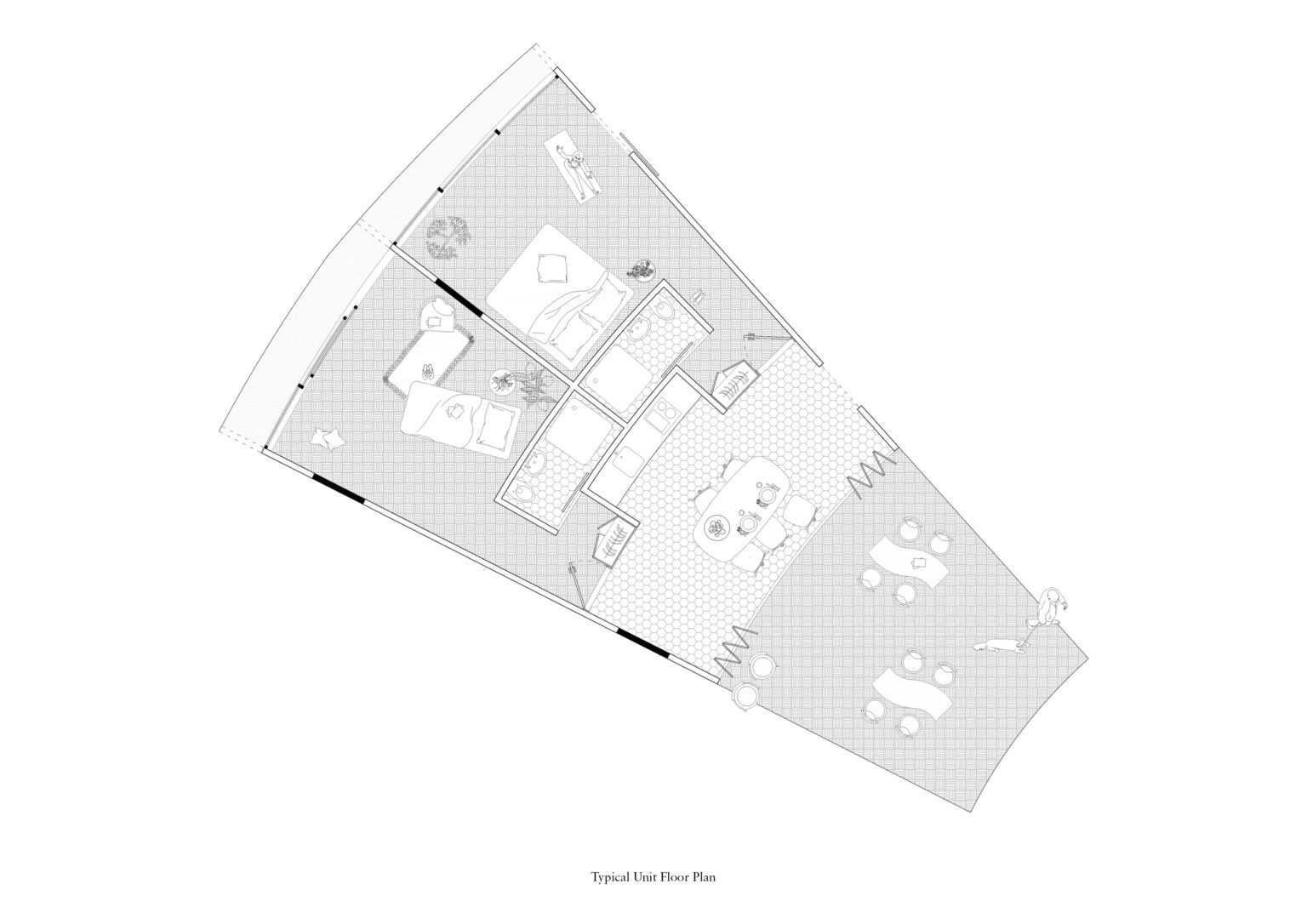 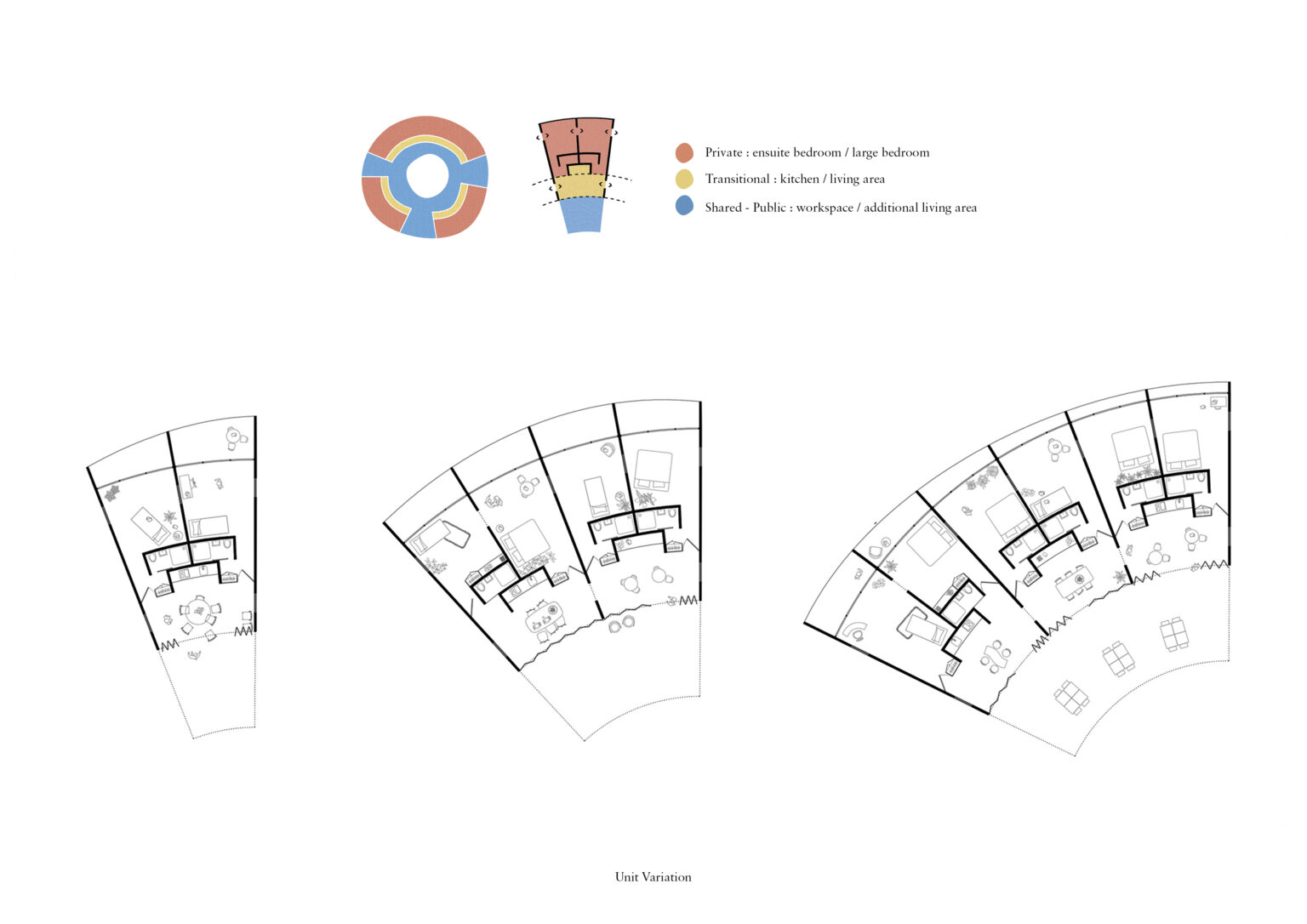 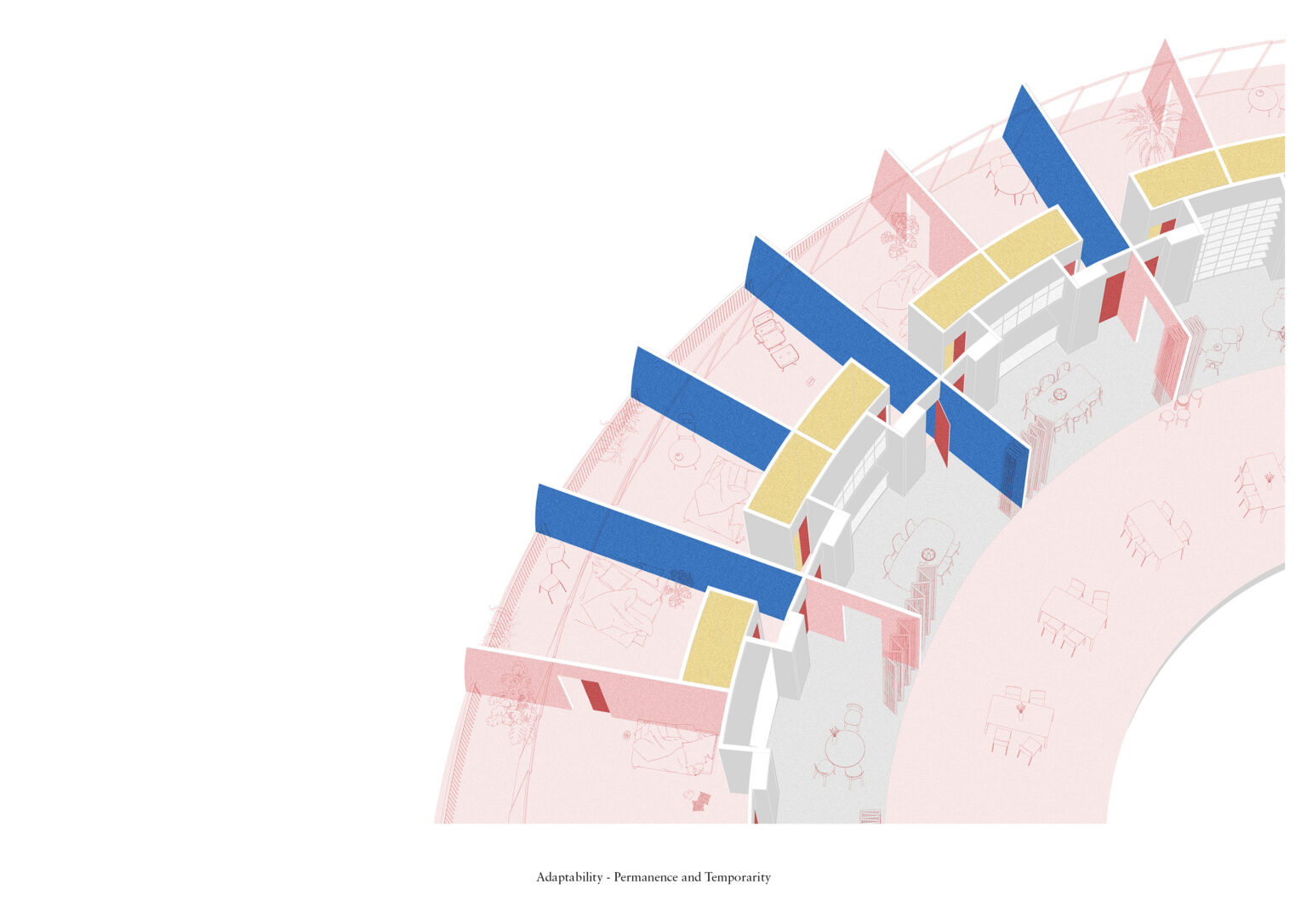