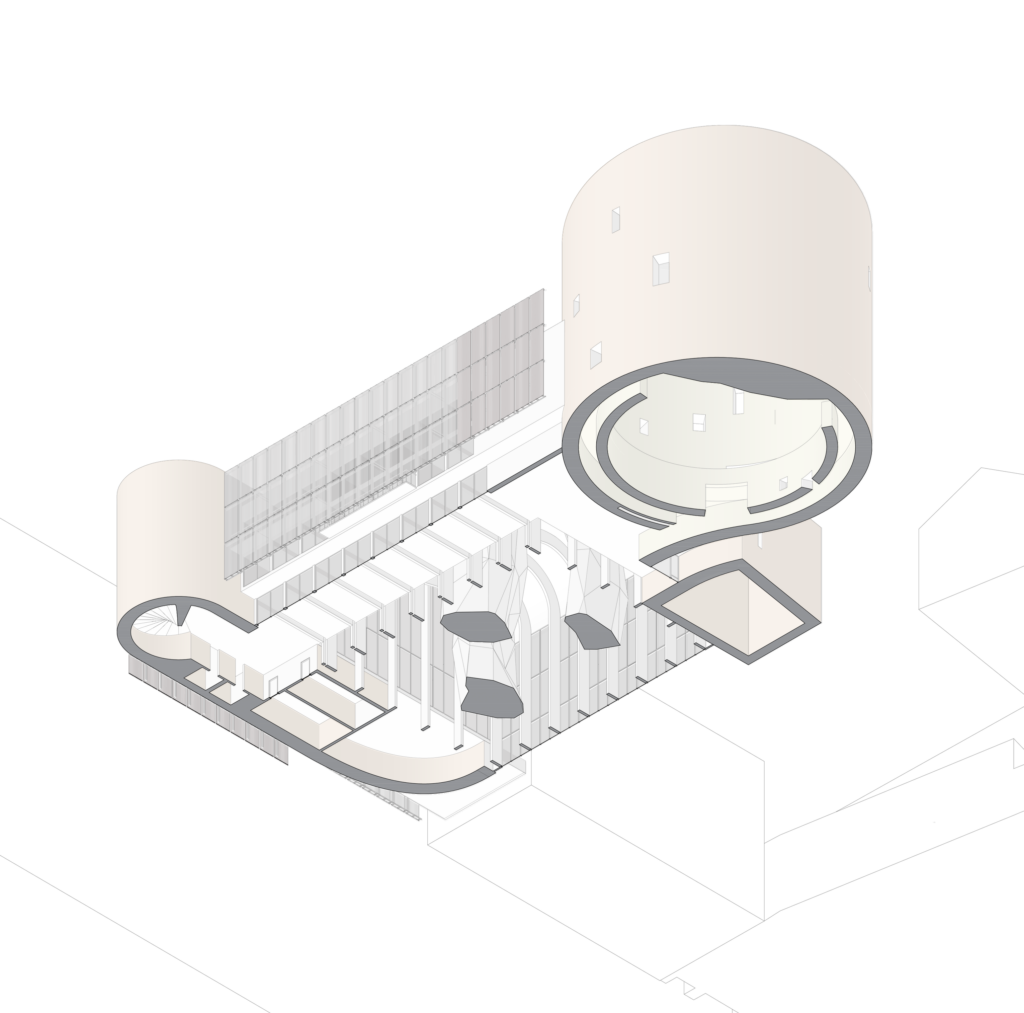 My work is primarily focused on ideas of community, with an interest in the intersection of architecture with social and political issues.

The Intersection of City and Landscape

The Intersection of City and Landscape

To me, the ills of contemporary society can be most felt in built-up urban areas. The congestion, pace, and friction of the city exacerbates and amplifies problems such as inequality, climate change, financial crisis, and even war. Many find comfort in the vast, ruggedness of Scotland’s outdoors. The landscape is the release from the tension of the city. While there is often beauty to be found in the city, and rural settlements aren’t without their issues, the relationship between the two is an apt representation of the man-made and the natural, order and disorder, rationality and emotion. Finding a harmony between the city and the landscape would reward better well-being for all of us.

Until very recently I saw the German Romanticist painting, Wanderer above the Sea of Fog, as being about the ability to overcome and endure, the sublimity of nature, and the act of contemplation. However, looking at it today we see a wealthy white man – an aristocrat standing with a sense of ownership. Suggesting that the land belongs to him, no one else. In the Fight between Carnival and Lent, by the Dutch Renaissance artist Pieter Bruegel, we see angst, deception and chaos in an urban marketplace. Nevertheless, there is a sense of a collective amongst the rabble, a crowd mentality; a stark contrast with the individuality seen in the first painting. These two paintings side by side, illustrate the atmospheric and cultural differences between the city and the landscape.

An analysis of the central belt of Scotland reveals that there is an extensive and diverse range of outdoor venues: from rock climbing to mountain biking to cold water swimming. Although it is critical to recognise that access to these venues is considerably harder when relying solely on the use of public transport. The outdoors isn’t open to everyone. There is a cultural and financial deficit in communities like Calton. Opportunities to experience the release of the outdoors simply aren’t available, and furthermore, outdoor spaces within the city are sparse and often without purpose or activity.

I would propose an outdoor centre in the Barras, with follies in outdoor locations within Glasgow and the southwest of Scotland. With the aim to provide opportunities where they would otherwise be unavailable, and develop a greater conversation about the way we inhabit the world. A space for physical exertion, for contemplation and learning, and a place of departure to the outdoors.

The building does not seek to bring the landscape into the city, the two are seen as distinct and inimitable. Instead through the programme, the spatial organisation, and the tectonic language, the project expresses the relationship between the two.

Within the programme, there is a curious juxtaposition between physical activity: climbing walls and skate parks – and learning: a lecture hall, classrooms and library. The two often overlook each other or even occupy the same room. A third significant part of the programme is spaces dedicated to observing the views of the Campsies, Old Kilpatrick Hill, Whitelee Windfarm and on a clear day: the Arrochar Alps.

The key diagram for the proposal is here: some stones and pieces of wood in a metal box. Loadbearing stone walls make references to ancient vernaculars of the Scottish Landscape; Skara Brae, Brochs, and Castles. A CLT and Glulam frame further demonstrate the strength of natural building materials and provide the main structure for the building. A metal sheet cladding, reminiscent of the market sheds occupying the site and suggestive of the man-made city, surrounds the building in parts. Instances where the rough stone is not dressed with the metal show where the landscape breaks free of the city. 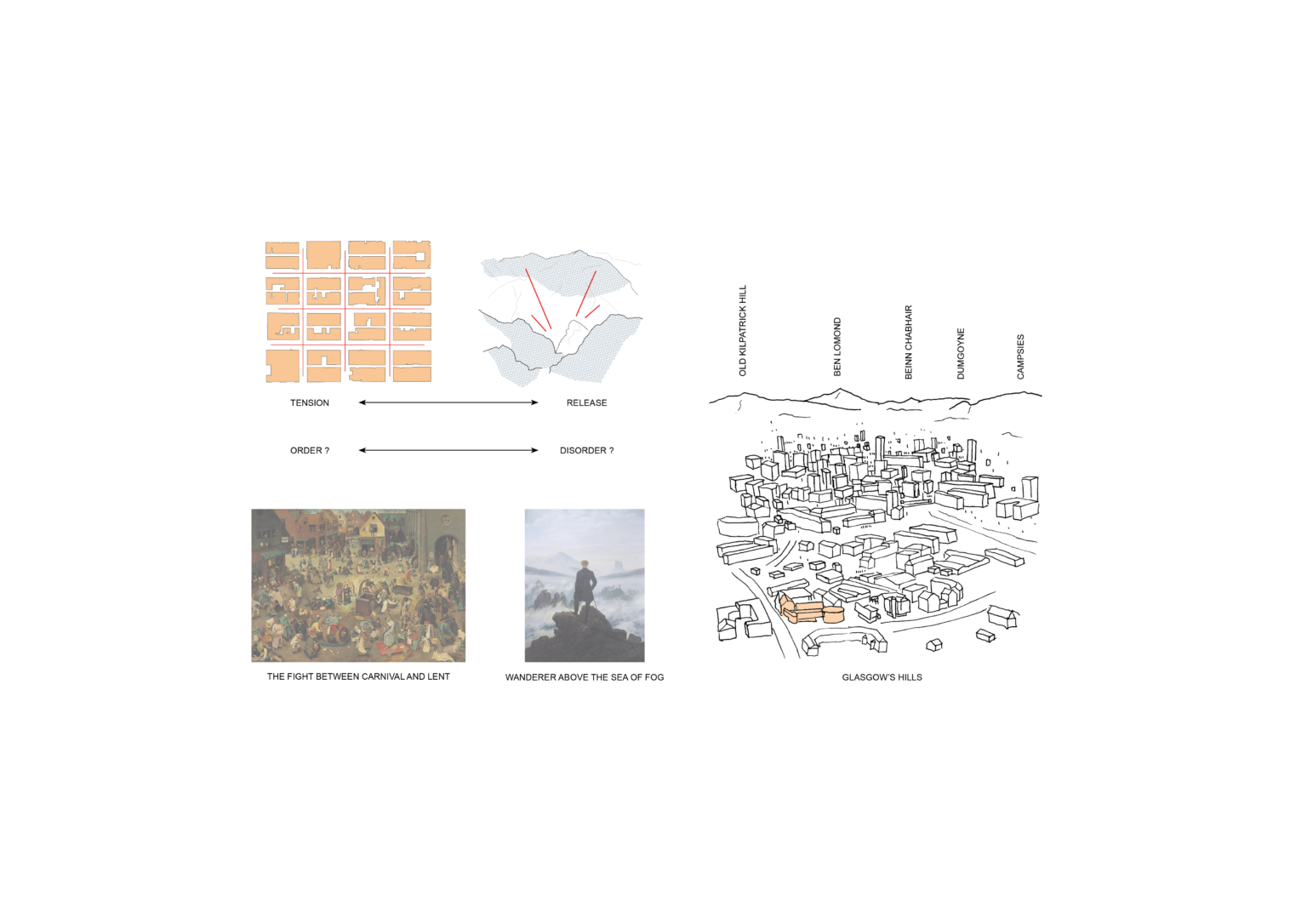 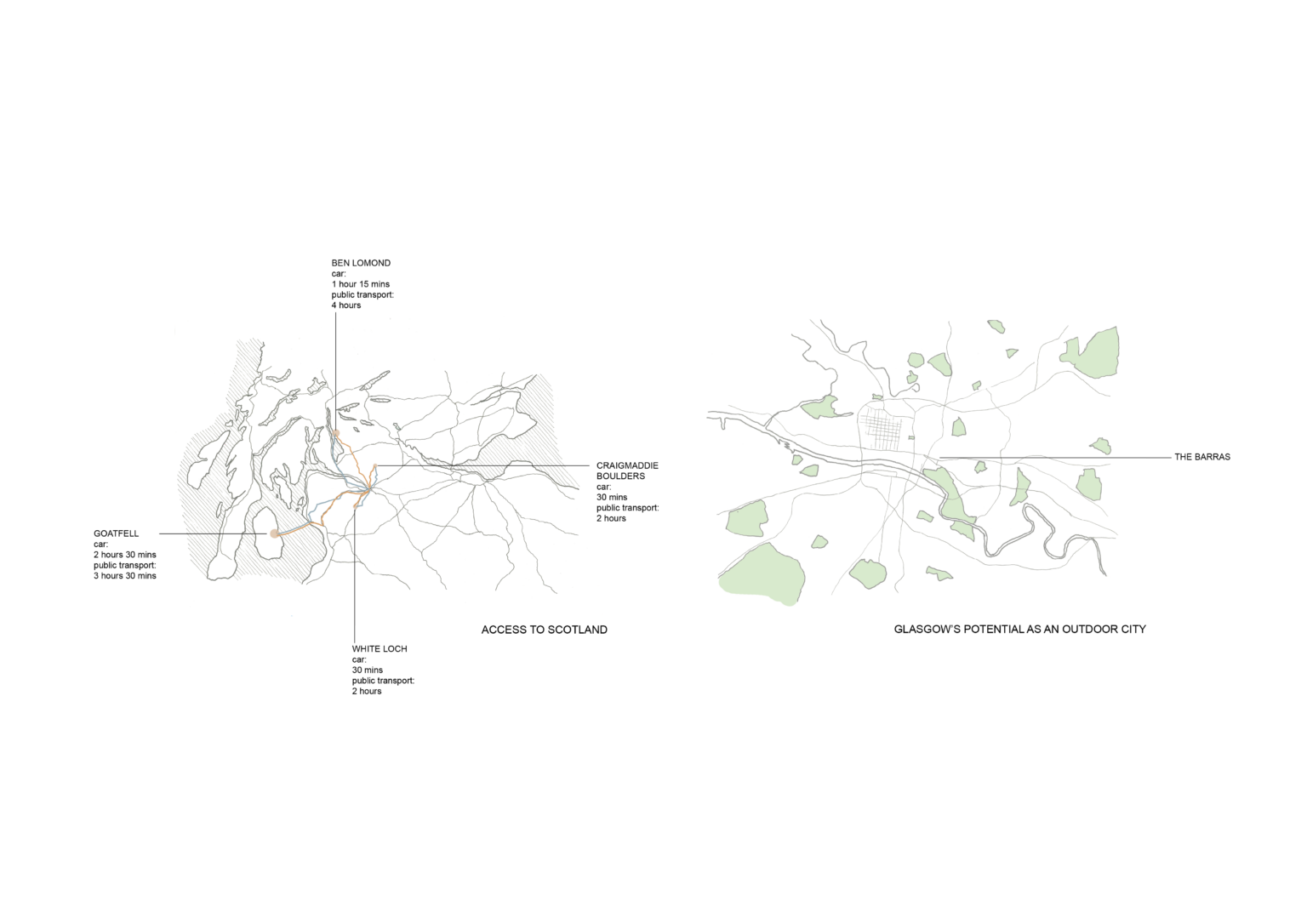 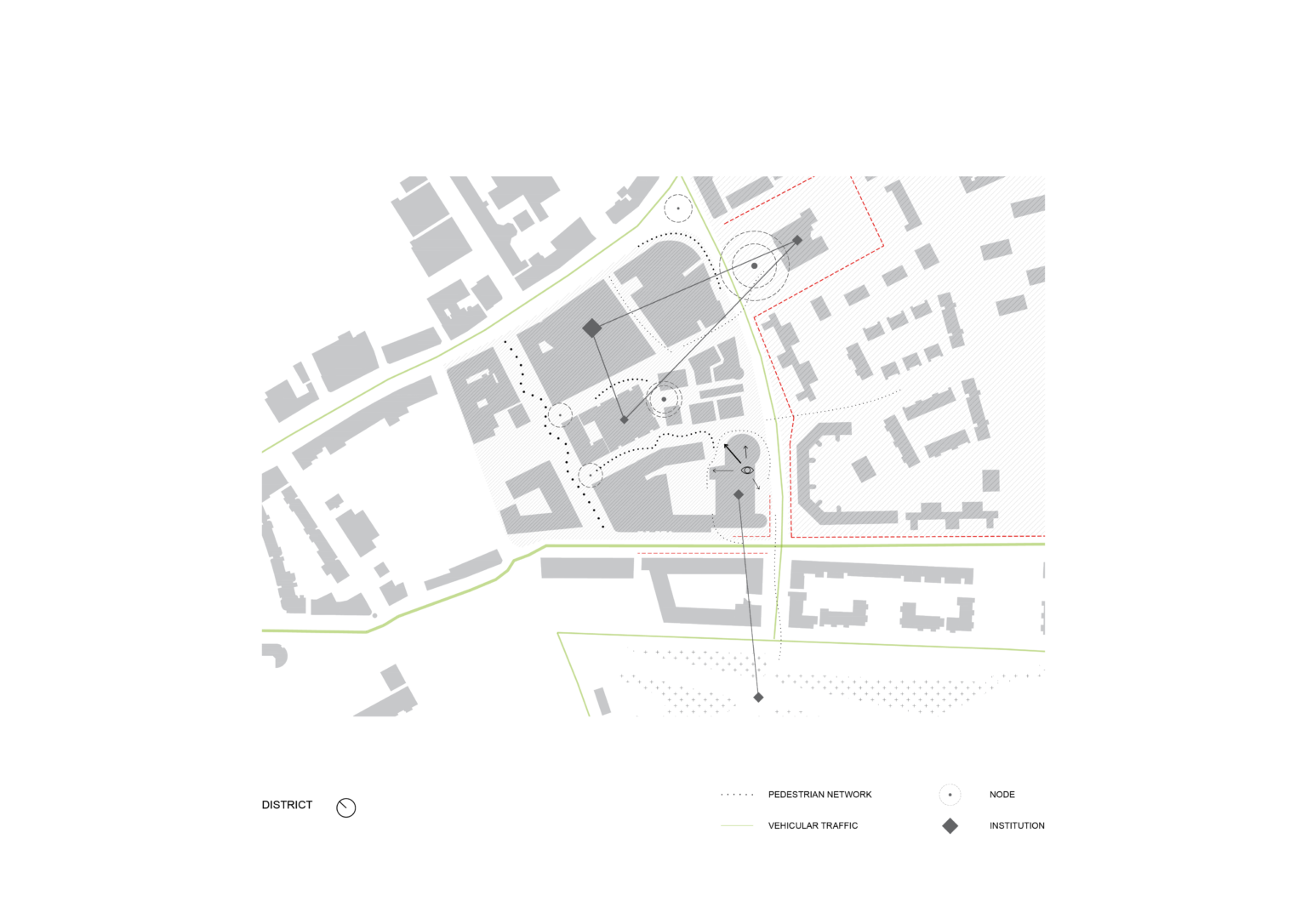 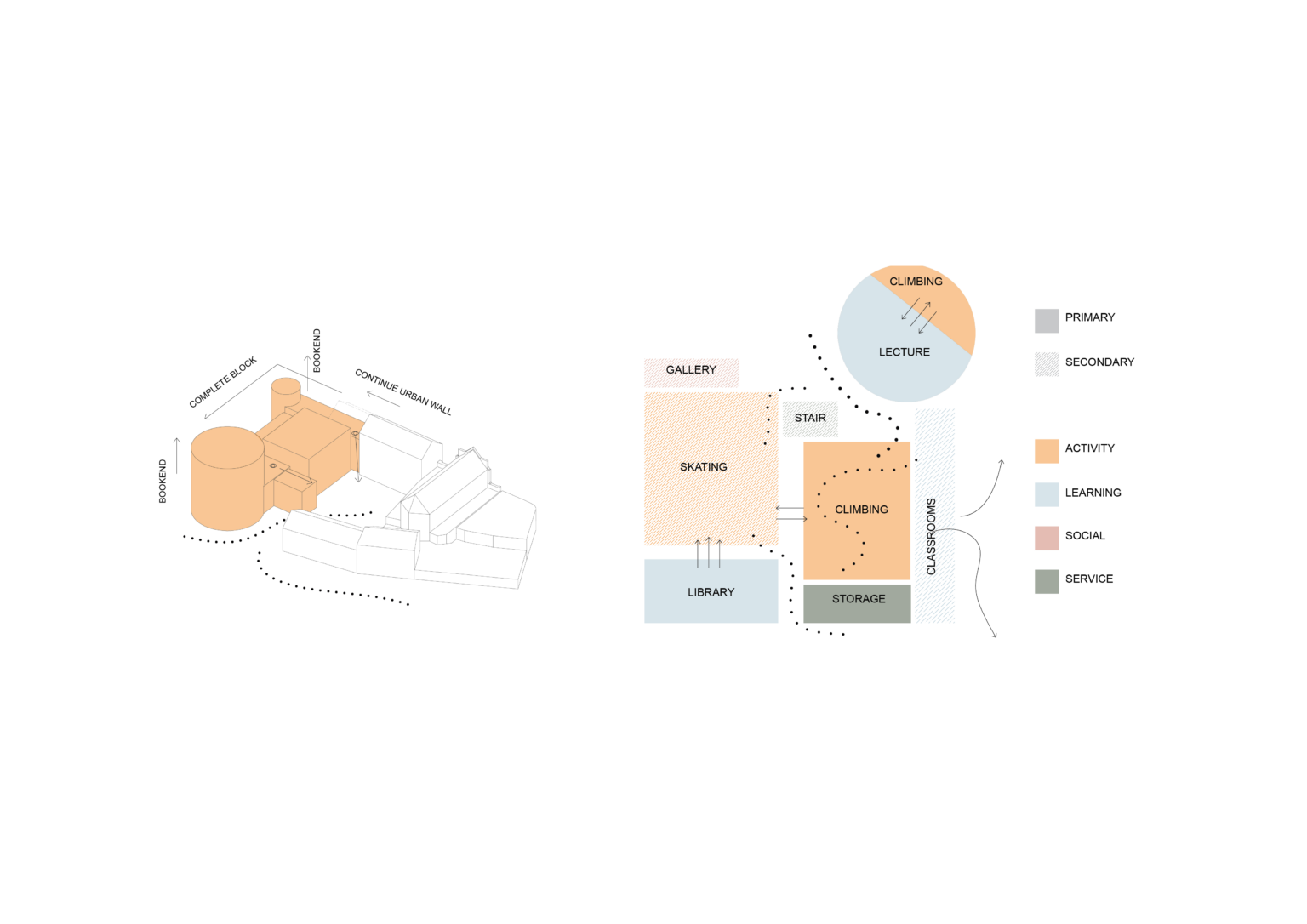 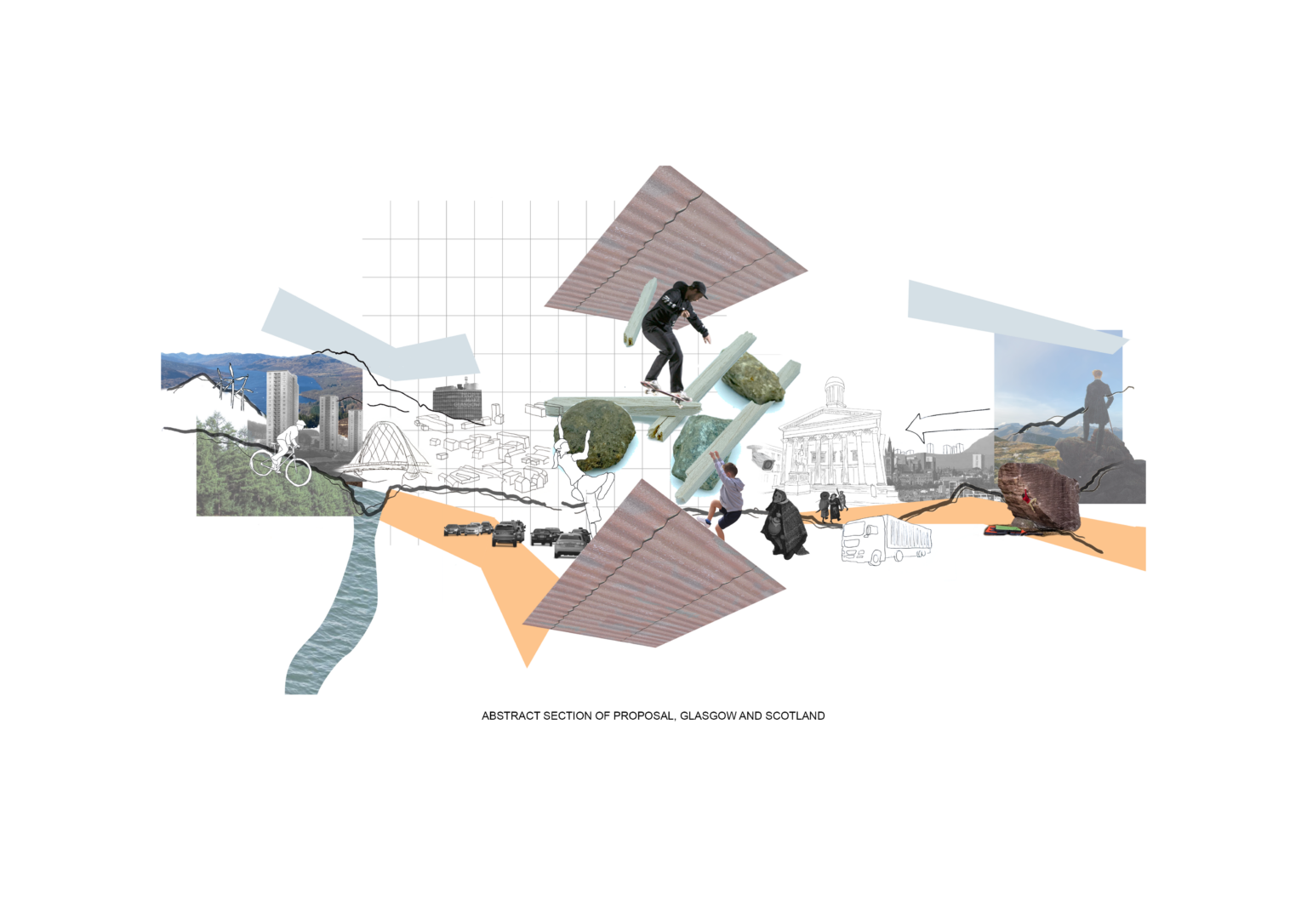 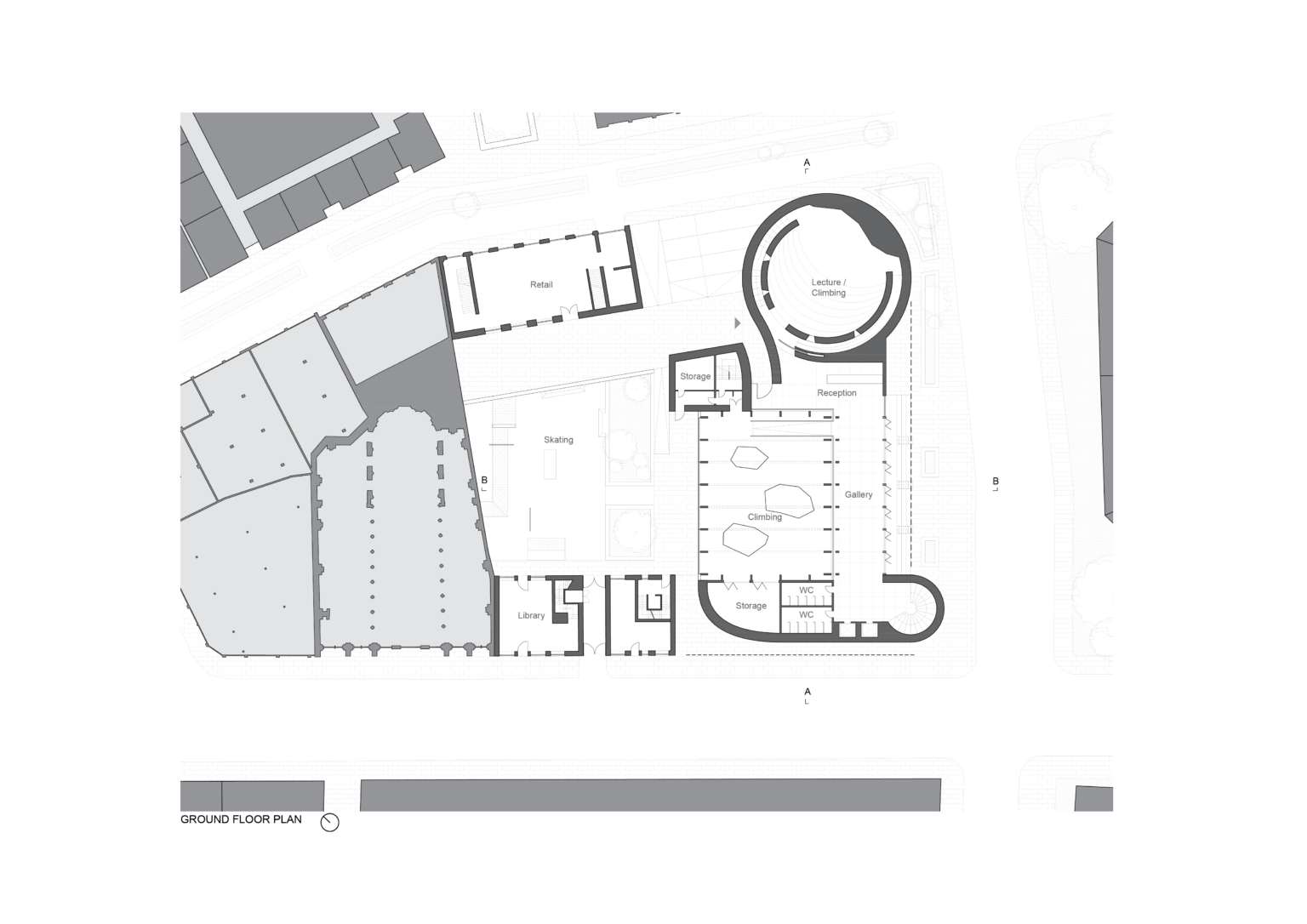 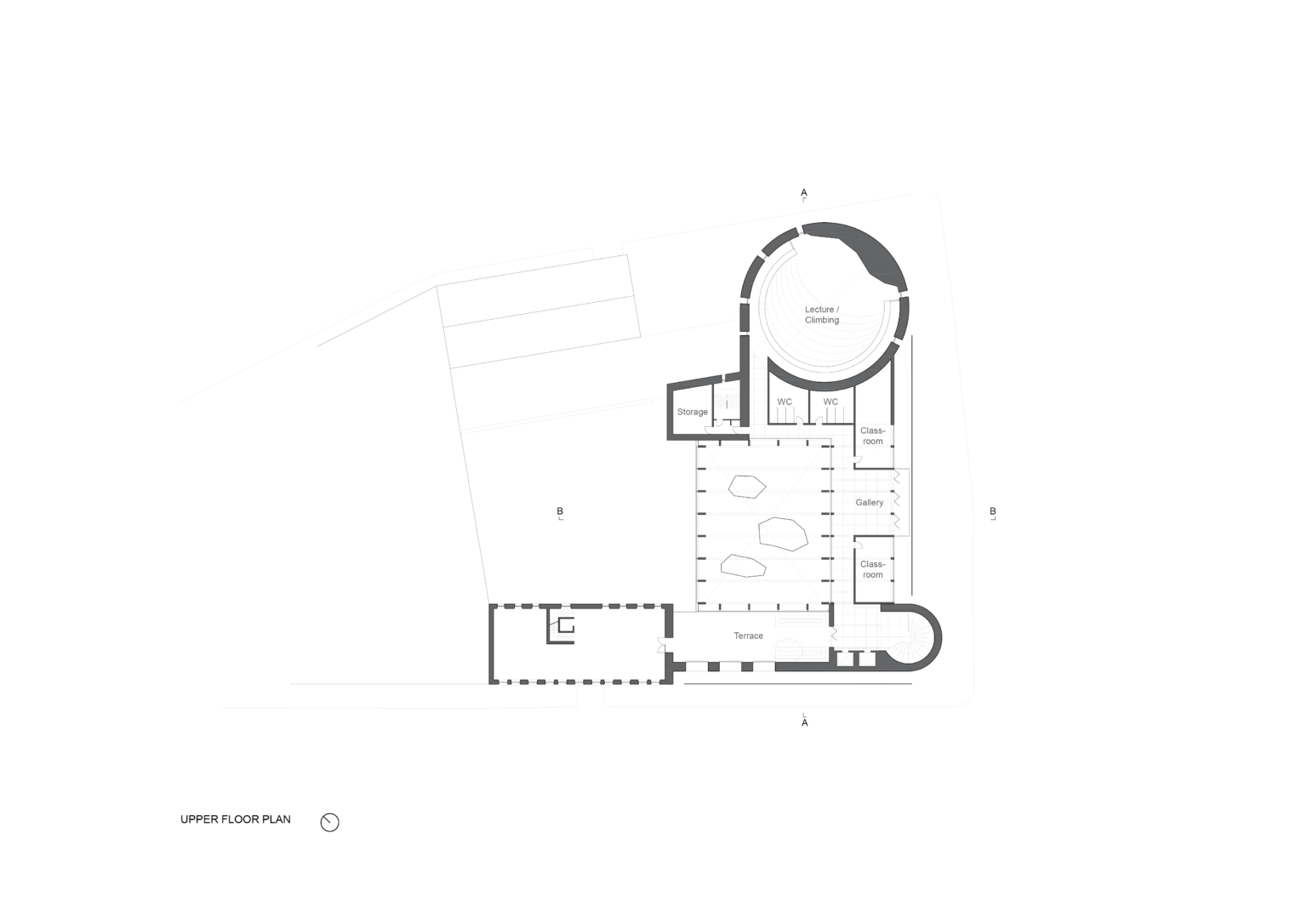 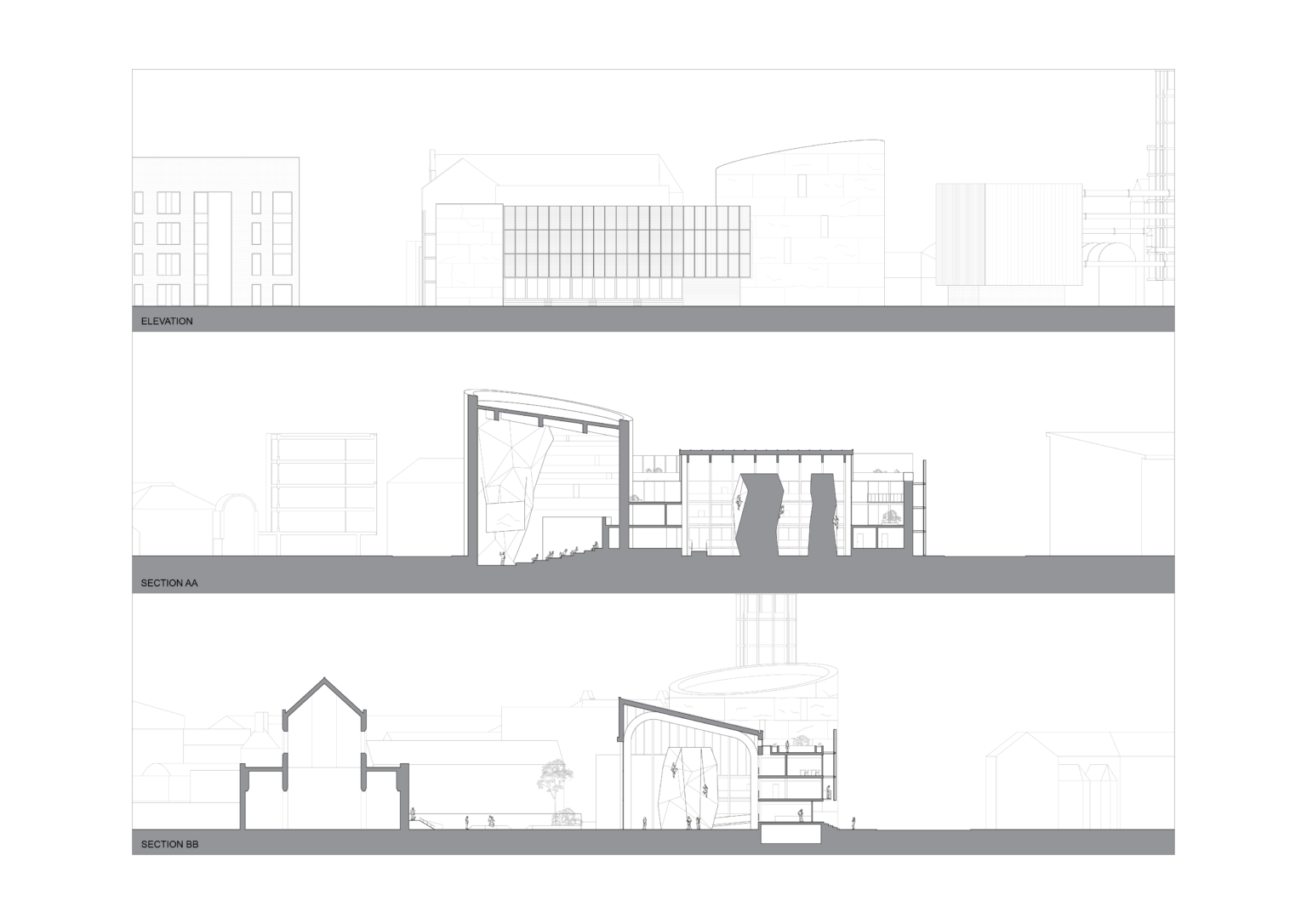 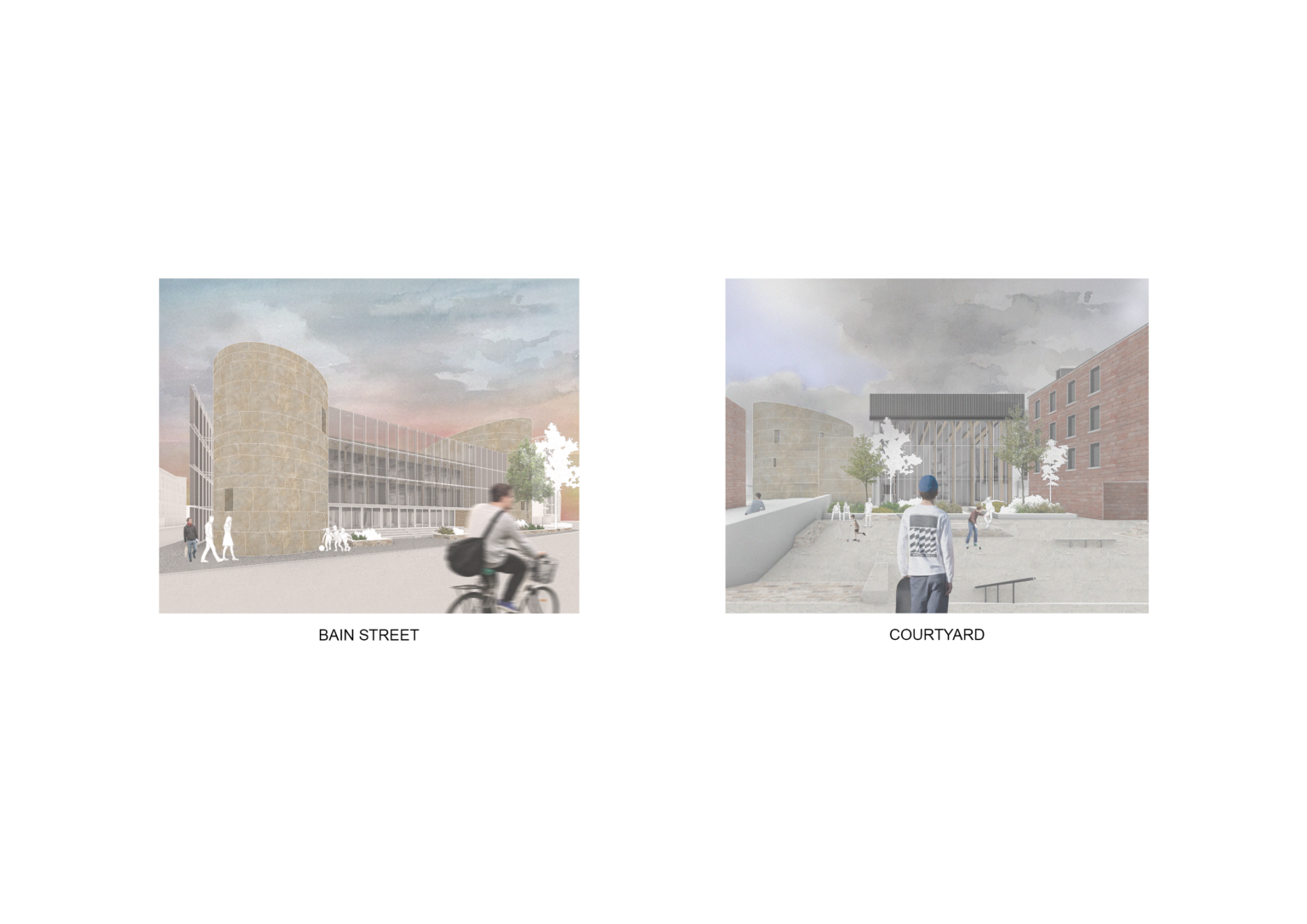 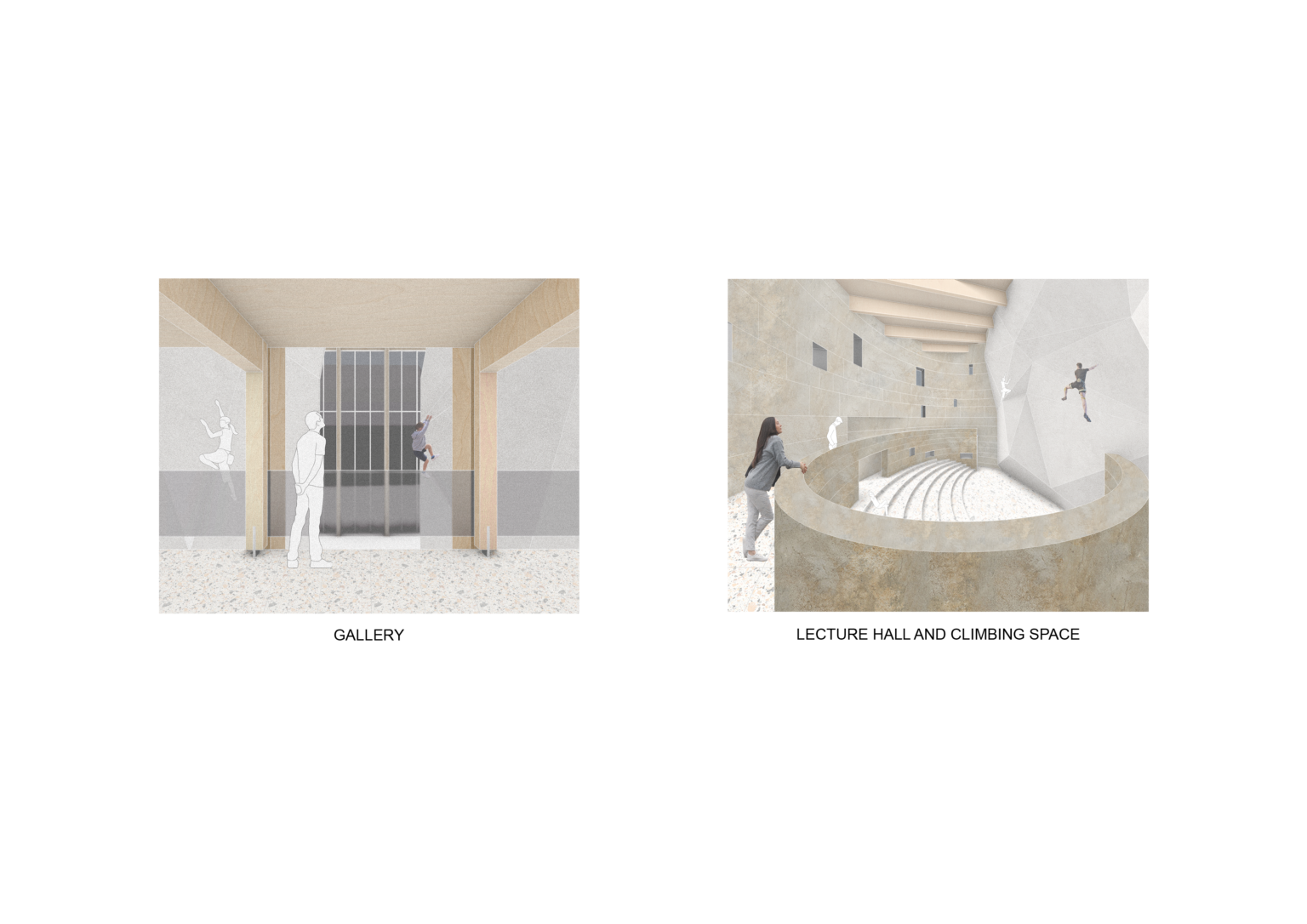