This project addresses a site on the main road through Balloch a town on the southern bank of Loch Lomond and Sistema’s brief for a Music Hall and Residential Retreat.

The choice of site reflects the needs of both the community existing in Balloch and the Music hall and Retreat for Sistema. The site sits alongside the town information centre and within sight of the train station and two pubs. However the site is currently a fairly unresolved space at the heart of the town, boasting one of many car parks and the entrance of the bike path form Glasgow. The Project is a significant public domain giving a place to gather in that is in Balloch or to meet friends at before heading to loch Lomond or the aquarium.

The music Hall has two entrances each at the riverside, one on the north elevation from the private courtyard and the other from the public courtyard through the southern elevation. Five steps up over the water edge take you from either the informal performance hall. The informality of the hall allows the space to facility and inclusive range of people and activities. The performance space creates an opportunity to celebrate the members and they’re musical progression at the end of a residency with beautiful views upriver to Loch Lomond.  The theatrics of the dual entrances and flexible partitions facilitating independent journeys for the audience and performers creates the tension and accumulation that make performance without that ostracising ponce that often comes with classical music rather than community.

Inspired by the gradient of the site I established separated levels to facilitate privacy from the public within the music centre. The private courtyard, accessed from the Sub Ground floor of the retreat centre, allows the younger children at Sistema to optimise an outside space at the riverside with minimal supervision. This freedom in play facilities members to form independent friendships and experiences that are harder to facilitate in the urban contexts Sistema’s orchestras are based in. The change in levels allows the public to see down through the garden to the river’s edge without representing a risk to the children, this soft boarder aims to minimalise the impact of the privatisation in the space and foster informal relationships with the new community. The courtyard also creates a private route form the retreat centre to the musical hall, allowing members to migrate independently between the two buildings when the public entrance to The Hall is closed.

On the Dorm wing extends out sitting on tree like legs high above the private courtyard and pedestrian thoroughfare, the use of height to create a secure and removed environment for the most intermit moments of retreat. The dorm wing sits along the northern perimeter of the site to optimise the views out towards Loch Lomond and into the treetops. A glazed corridor runs along the southern elevation opening out into informal sitting and games spaces and facilitating access to the dorms, the façade of the building forms a balustrade allowing the corridor to open to regulate the air flow and temperature, forming a covered balcony on the warmest days. The southern Circulation along the corridor also insulates the dorms from noise pollution from the road in the evenings.

The main room allows the full orchestra to assemble for meals and meetings, the stepped seating allows everyone to see and hear the agenda for the day, at the bottom of the stairs the room passes under the public thoroughfare to glazed wall opening up to the private courtyard descending to the river edge. Small practise rooms are divided off form the space.

In Order for the team to be able to facilitate sustainable and impactful retreats the staffs wellbeing is fundamental, so sleep is essential. Within the Dorm wing there are single dorms with separate facilities allowing for a range of members needs, but also for on duty staff members to stay amongst the members comfortably, without breaching Safeguarding, while the rest of the team can rejuvenate. The staff wing also has a foyer to provide a private space if members to interact with staff. 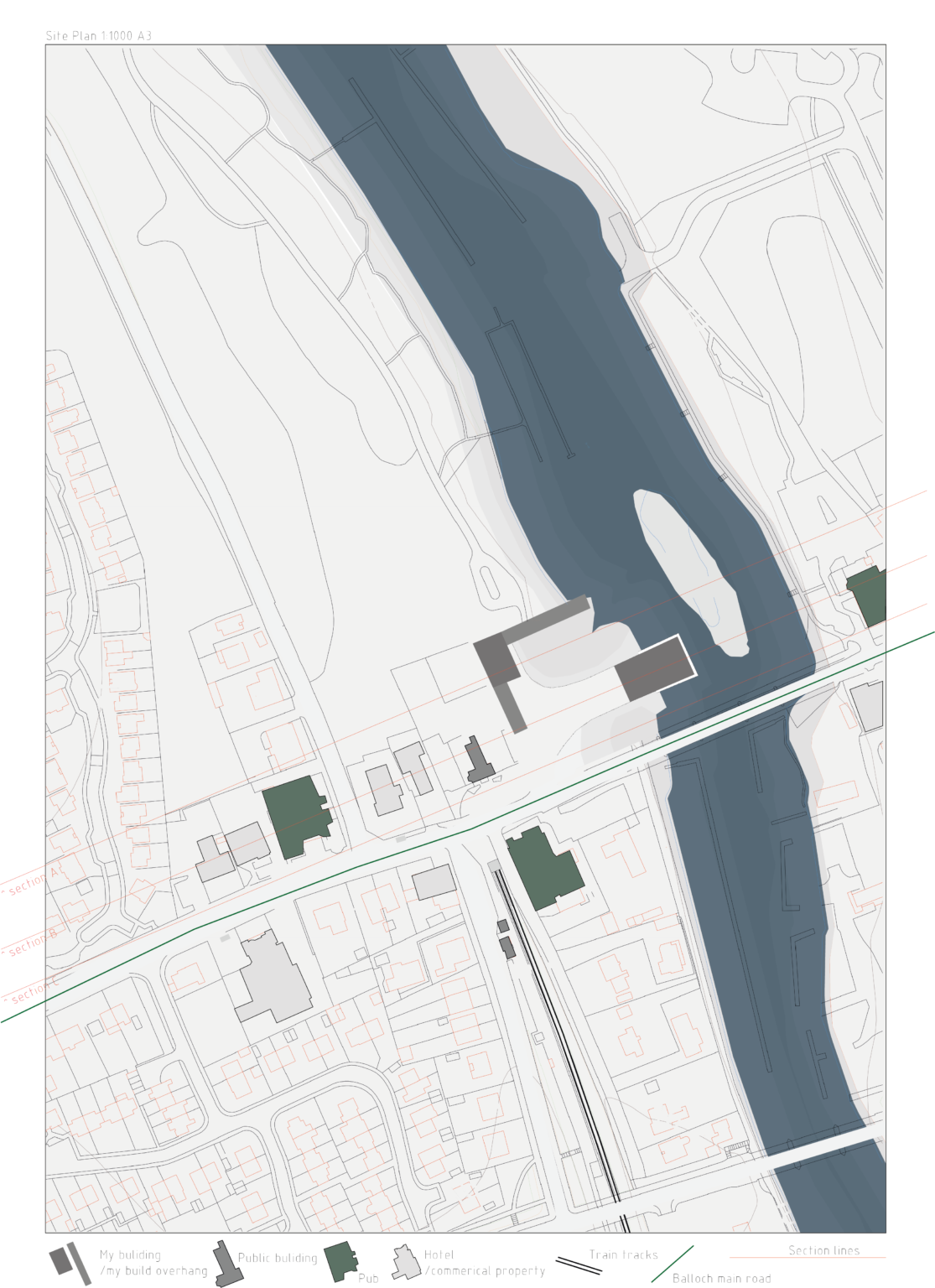 Describes the typology of the high street, commercial and public buildings surrounding the site
1 of 10
Previous Next
Close 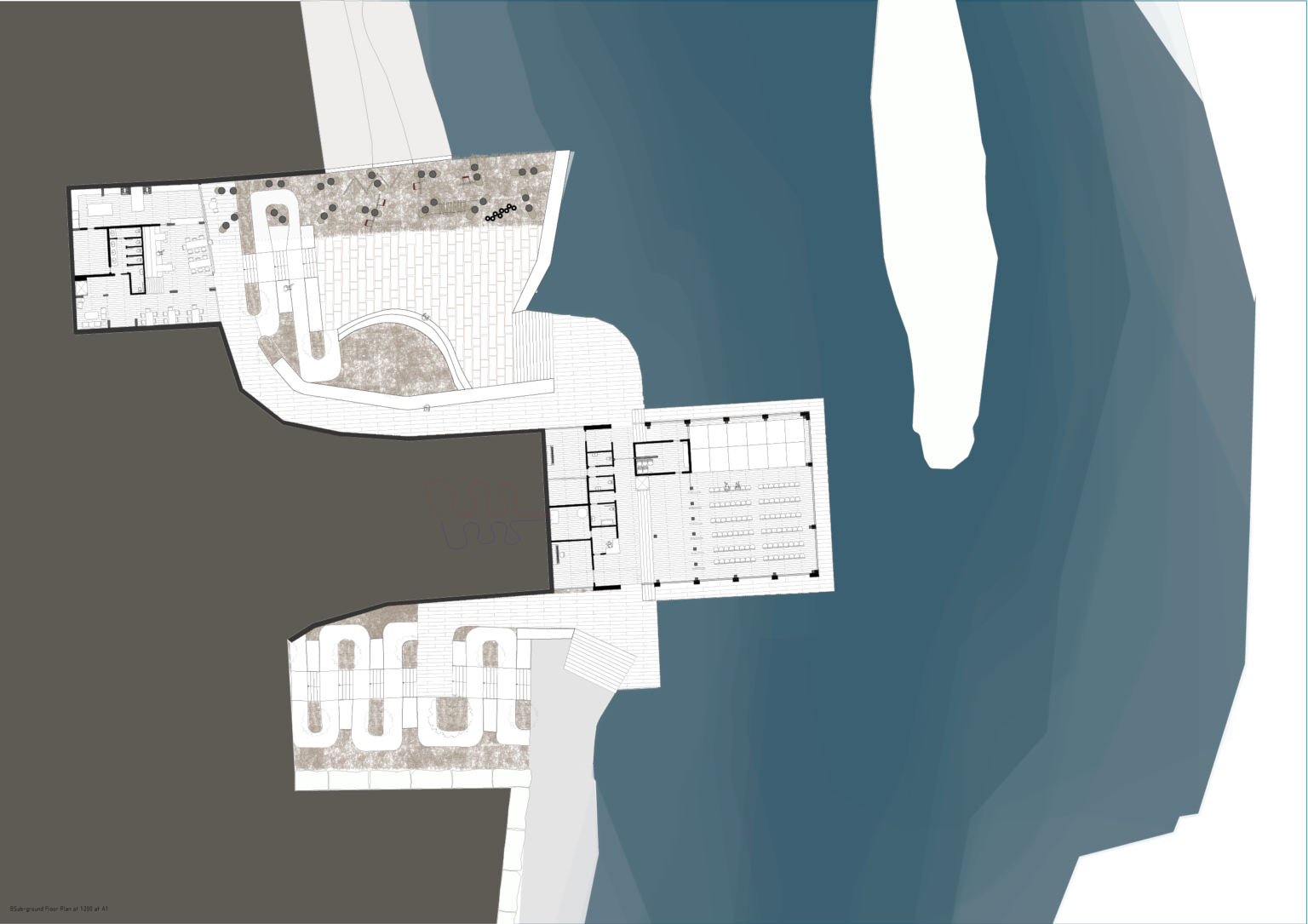 Sub Ground floor Residential Retreat at 1-200 at A1 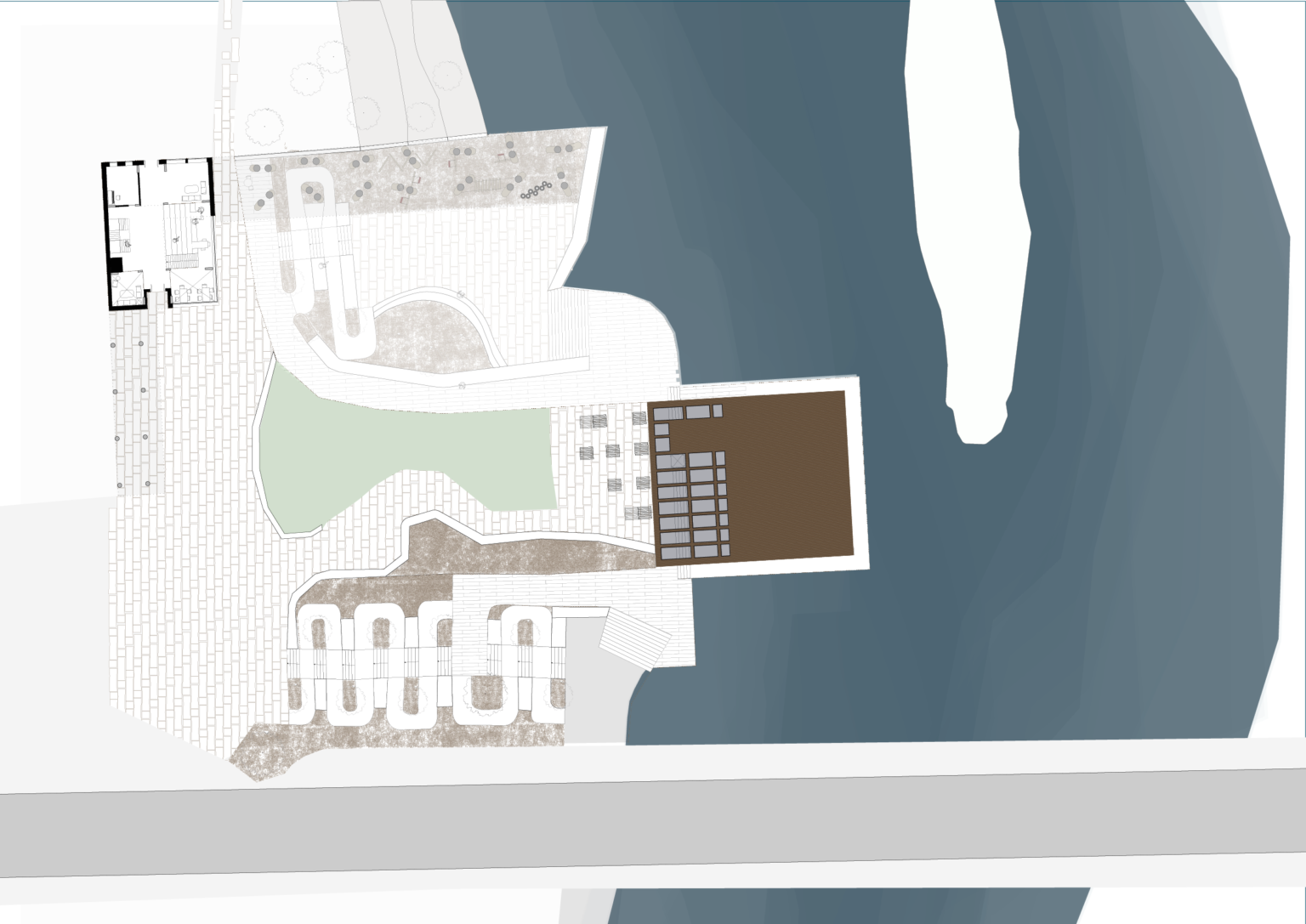 Ground floor Residential Retreat at 1-200 at A1 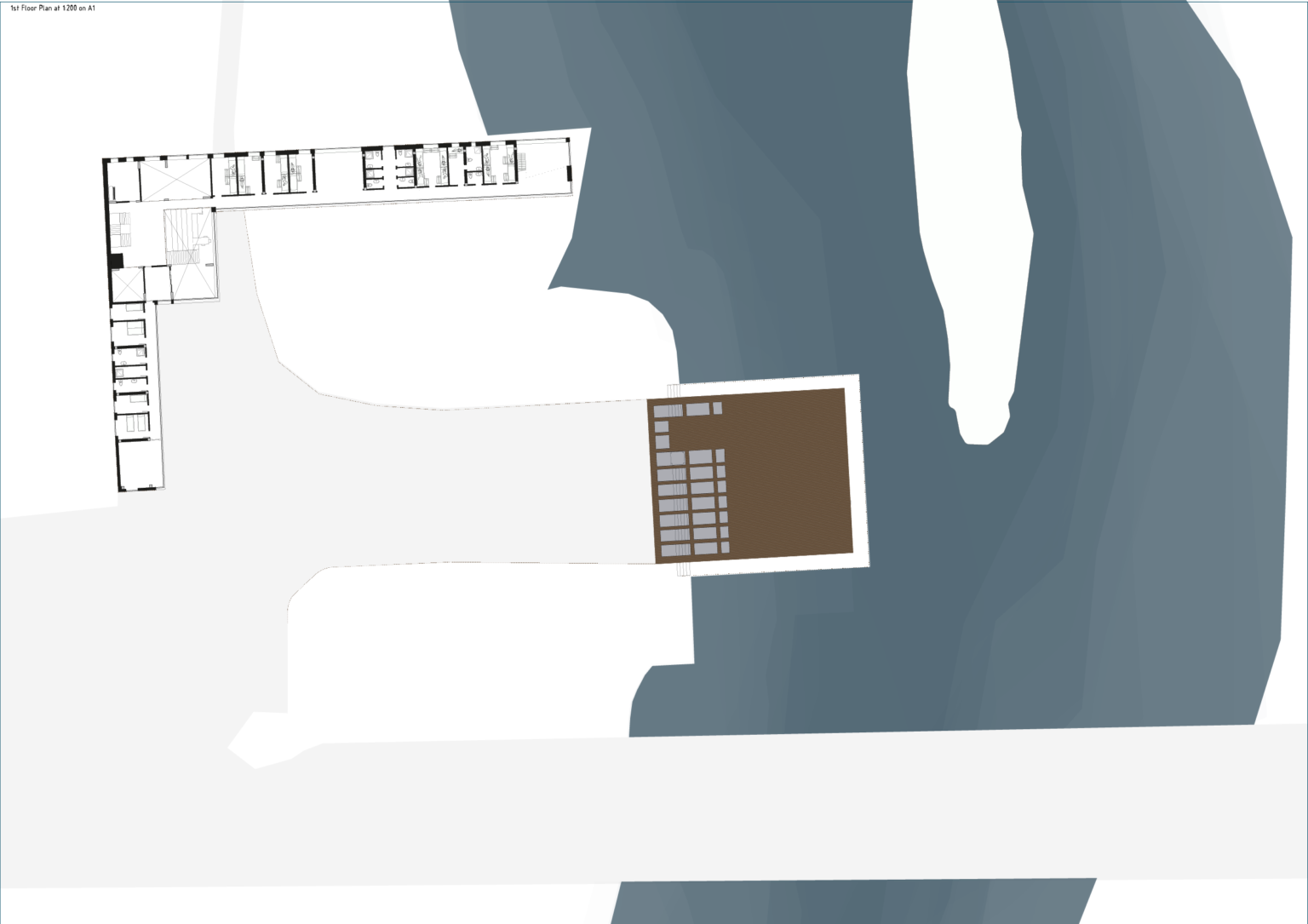 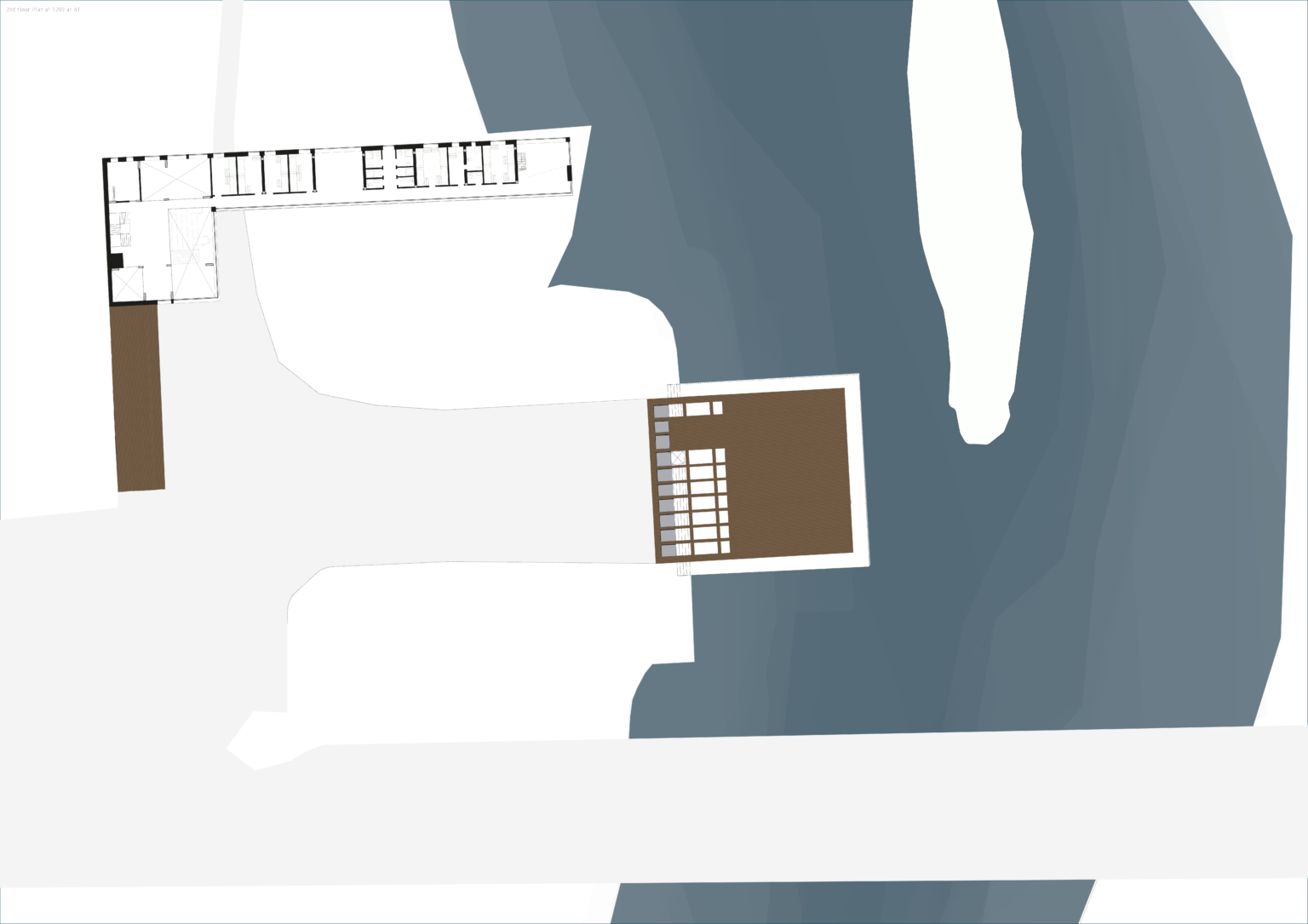 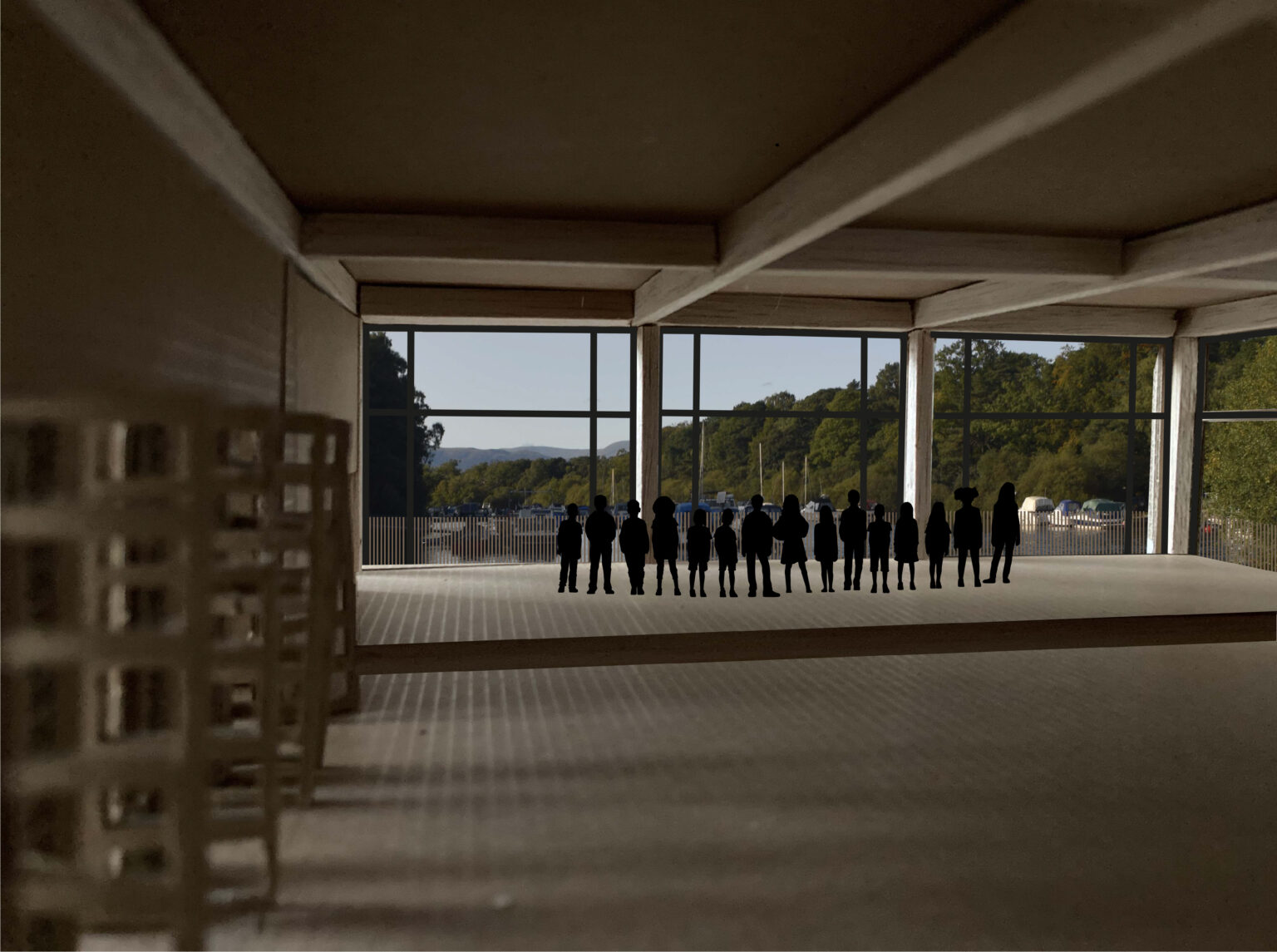 Kids standing on lifted stage in rehearsals, view out to the north from over the water edge.
9 of 10
Previous Next
Close 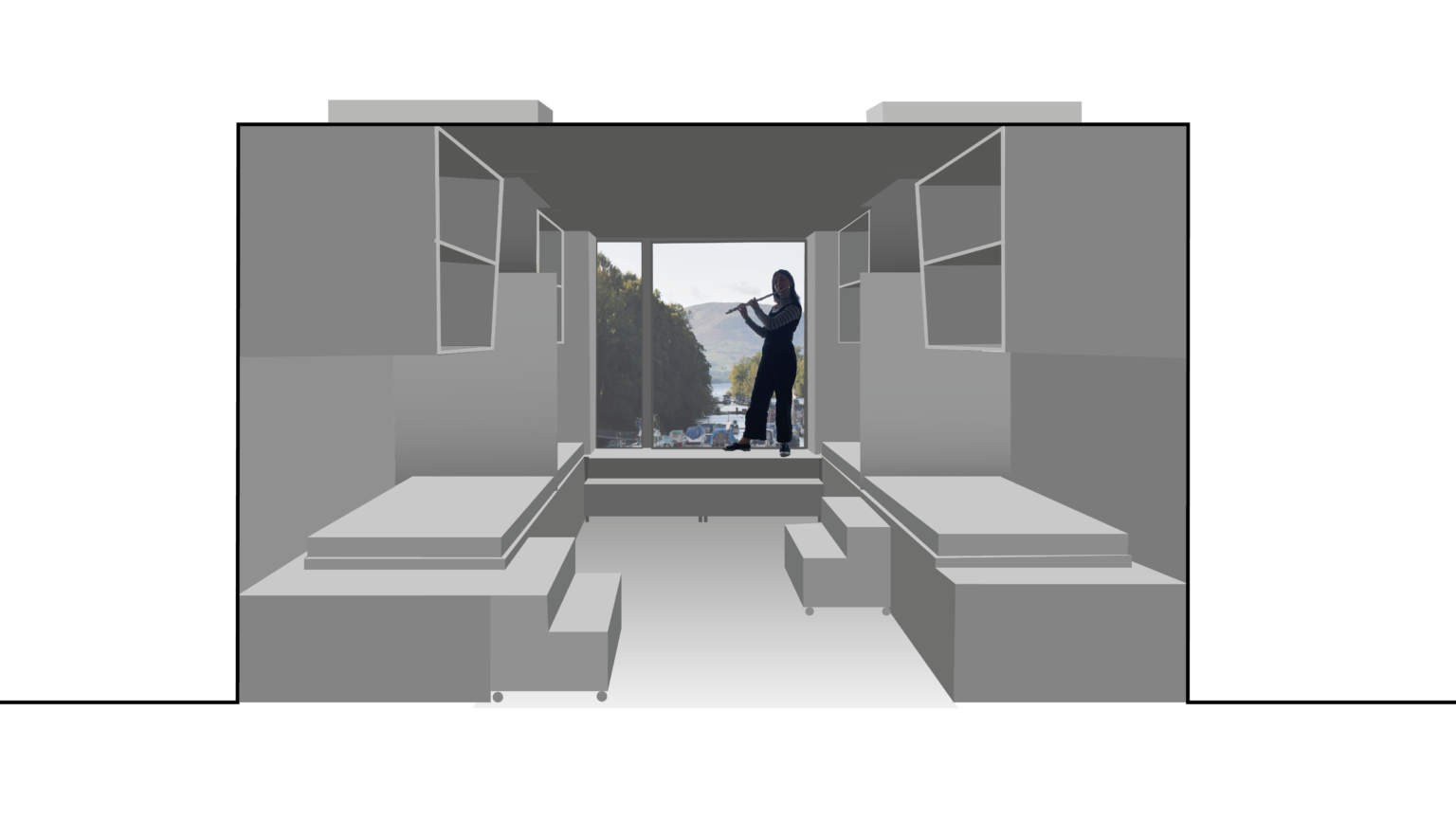 The dorms where designed so each member had two steps up into their bed, these steps where full of storage could be rolled around the space to access shelves or to form an informal stage in deep northern windows.
10 of 10
Previous Next
Close