Glasgow’s history is shown through what’s left behind: the cranes that still sit along Clyde bank, the skeletons of decrepit warehouses, the grand sandstone buildings of old wealth. The River Clyde in particular continues to embody Glasgow’s past, linking its disjointed elements. This thesis is focused on the reuse of derelict urban space along Glasgow’s primary waterway, the River Clyde, to reweave the city’s social fabric.

The site I have chosen for the thesis sits along and over the Clyde where the City Union rail used to run. The site itself establishes the first part of the proposed programme – which focuses on re-building the connections the river once had to the people who live all over Glasgow. The old railway line will become a new pedestrian/ cycle route to reconnect the south side and north side of Glasgow, as well the east/west edges.

The second part of the programme moves beyond physical connection towards overcoming the social divides the physical disconnect created. This aspect will focus on the old site of Paddy’s Market under the viaducts, a linchpin for the city. The scheme will revitalise the market community that once existed by introducing new market spaces that will accommodate individual sellers and house a permanent food market. The food market will be supplied by a hydroponic farm that will use the Clyde as its water source and grow on City Union bridge, doubling as a botanical garden.

Connecting these elements will be the technology thesis: water circulation as lighting. These clear water pipes will run between the purification section of the building, through the market to provide sufficient light, and will draw paths and routes to spaces like the garden, and rooftop city connection, whilst delivering water to the necessary places. My project will grant the river new purpose, by exploring the movement of water, the movement of people, and in turn a re-connection of identity. This thesis embodies a building program that revives the narrative of the Glasgow River Clyde as a central piece of the city and locus of community. 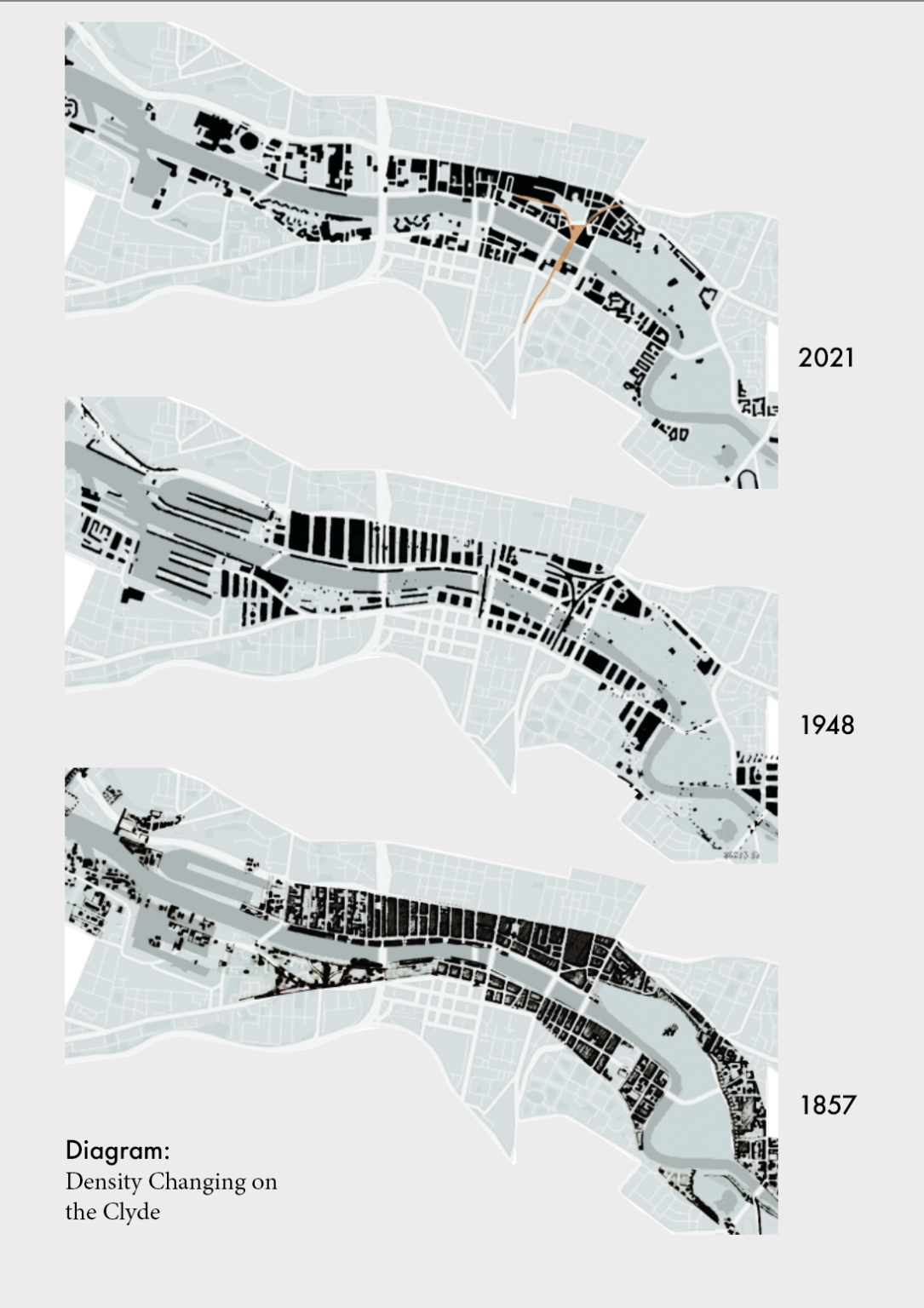 Late 19th century industrial Glasgow was a booming place. The population was one million people - double of what it is today. The reliance the city had on the River Clyde was unequivocal – it provided connection, a place of work for thousands, and a sense of purpose for the city. It brought in money for the rich, and labour for the working class, everyone had a part to play when it came to the Clyde. Beyond the river, life occurred at a much less industrious and broad scale. The diagram to the right illustrates the loss of density along the Clyde side, and analyses the transformation it has undergone from being a main artery of the city for trade, a site of unequivocal importance during the industrial revolution, to its decline in significance post WWII. Finally, it clearly demonstrates todays lack of reliance the city once had, with much of the city turning its back to it, and numerous derelict spaces along its banks.
1 of 16
Previous Next
Close 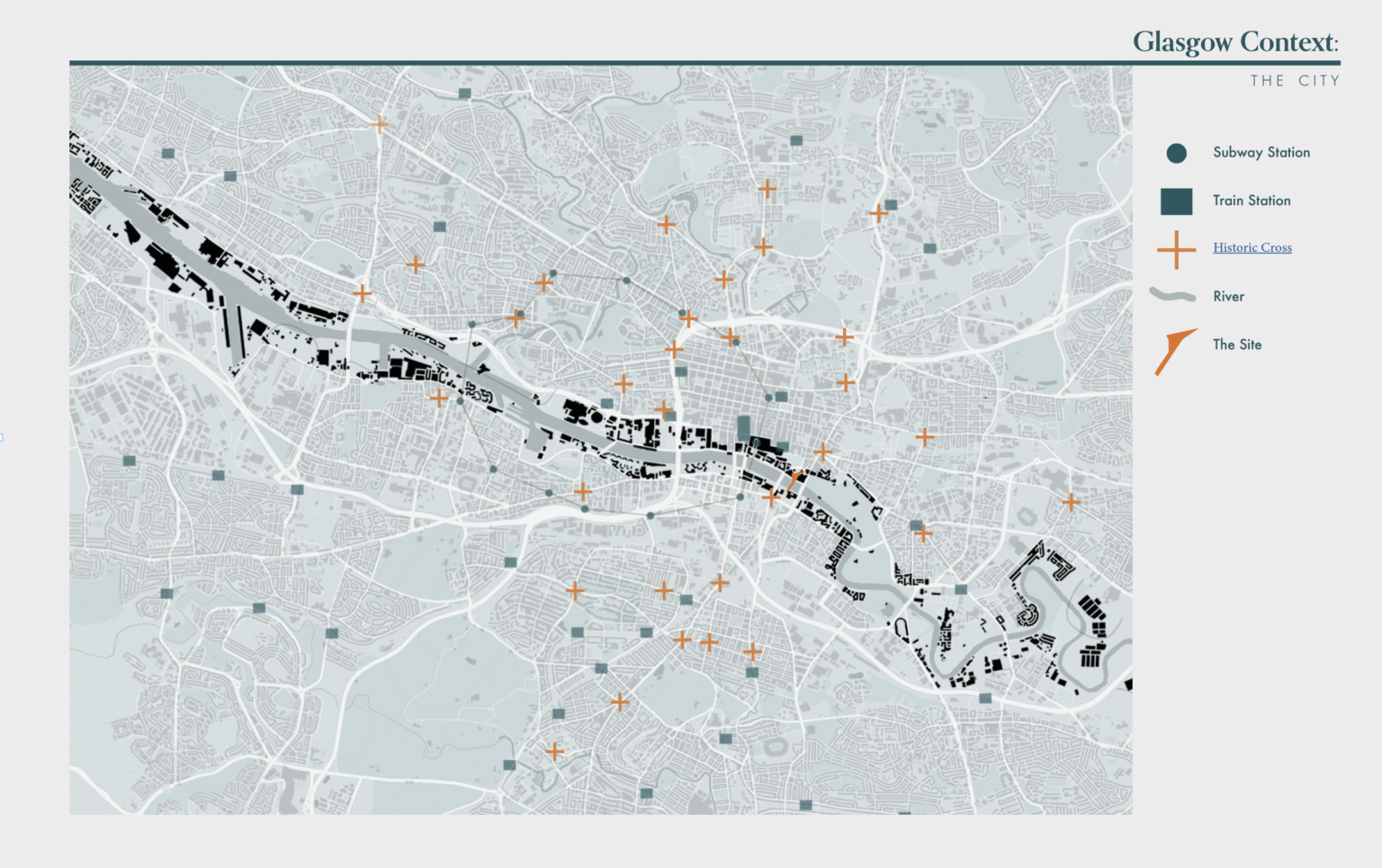 2 of 16
Previous Next
Close 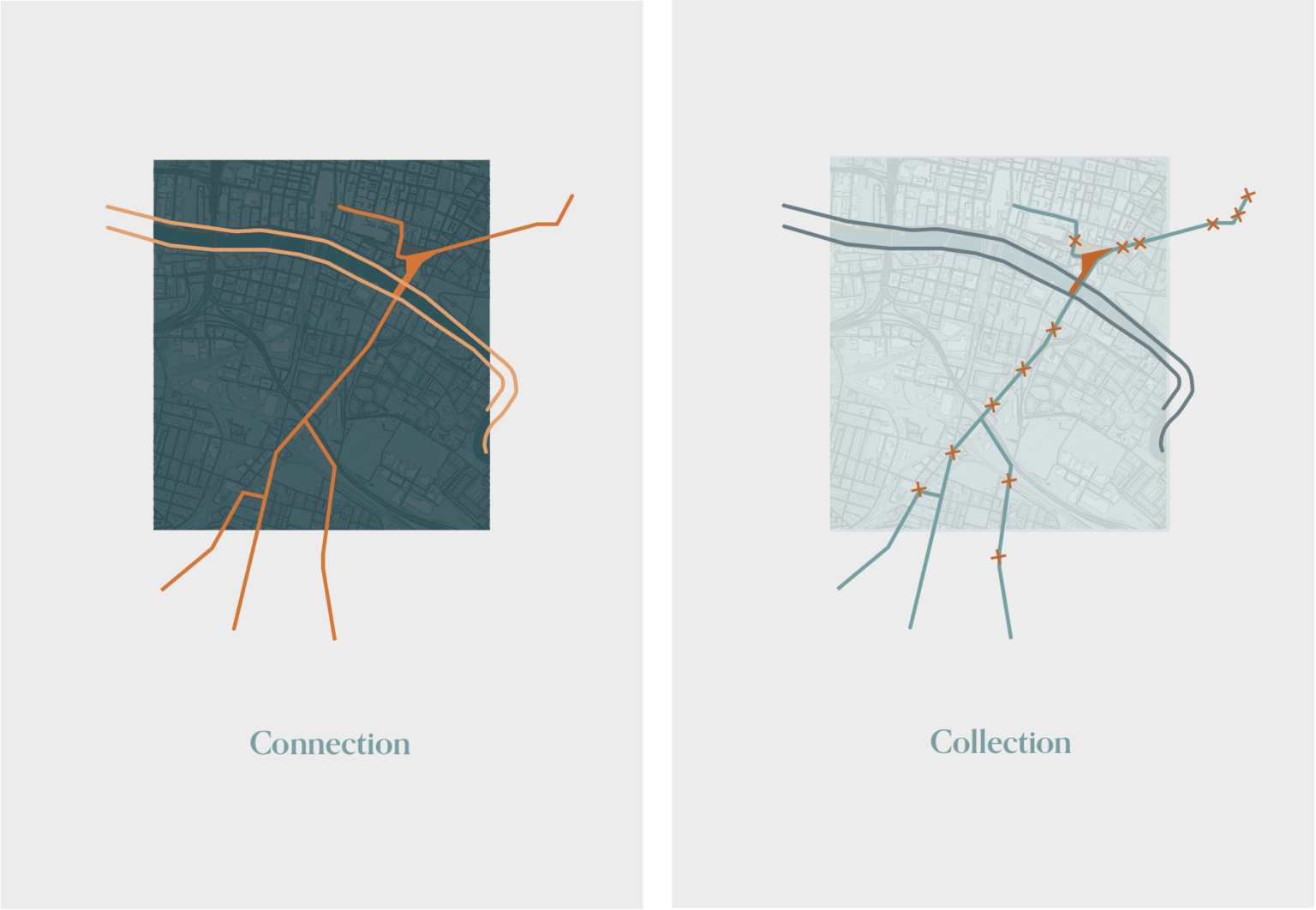 The first, is looking at the river as a connection asset. The thesis begins to frame the river as a connection point within the city, beyond the city, and connection to renewable energies and ways of living, by reimagining it to act as a vital city route anchor. The second, is drawing upon the historic crosses Glasgow once had as inherent social collection spaces that bring opportunity for more permanent infrastructure like markets. This thesis will intertwine the two elements of connection and collection to create a programme that can be truly rooted in the city, but also stretch much further than the project site itself.
3 of 16
Previous Next
Close

The site sits along and over the river Clyde in Glasgow, where an old upper level train line used to run, and the lively Paddys Market used to thrive. The reuse structure offers long stretches of old viaducts as well as a deep structural centre plate. It also offers direct contact to the river, large south facing flat roof, and great city connections. As well, The Briggait is a neighbouring building which offers a community of artist and studio space programme to plug into.
4 of 16
Previous Next
Close

5 of 16
Previous Next
Close 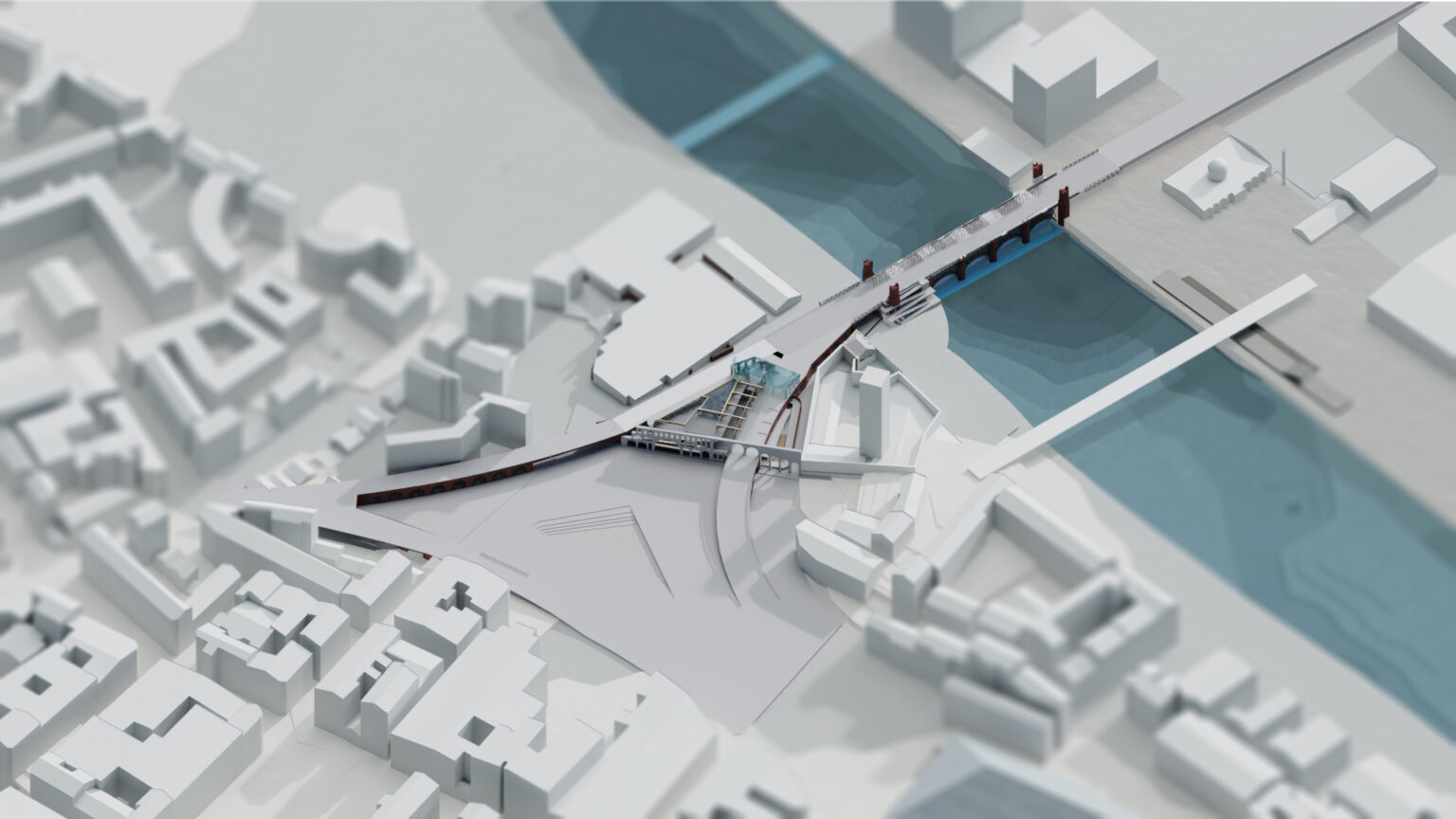 6 of 16
Previous Next
Close 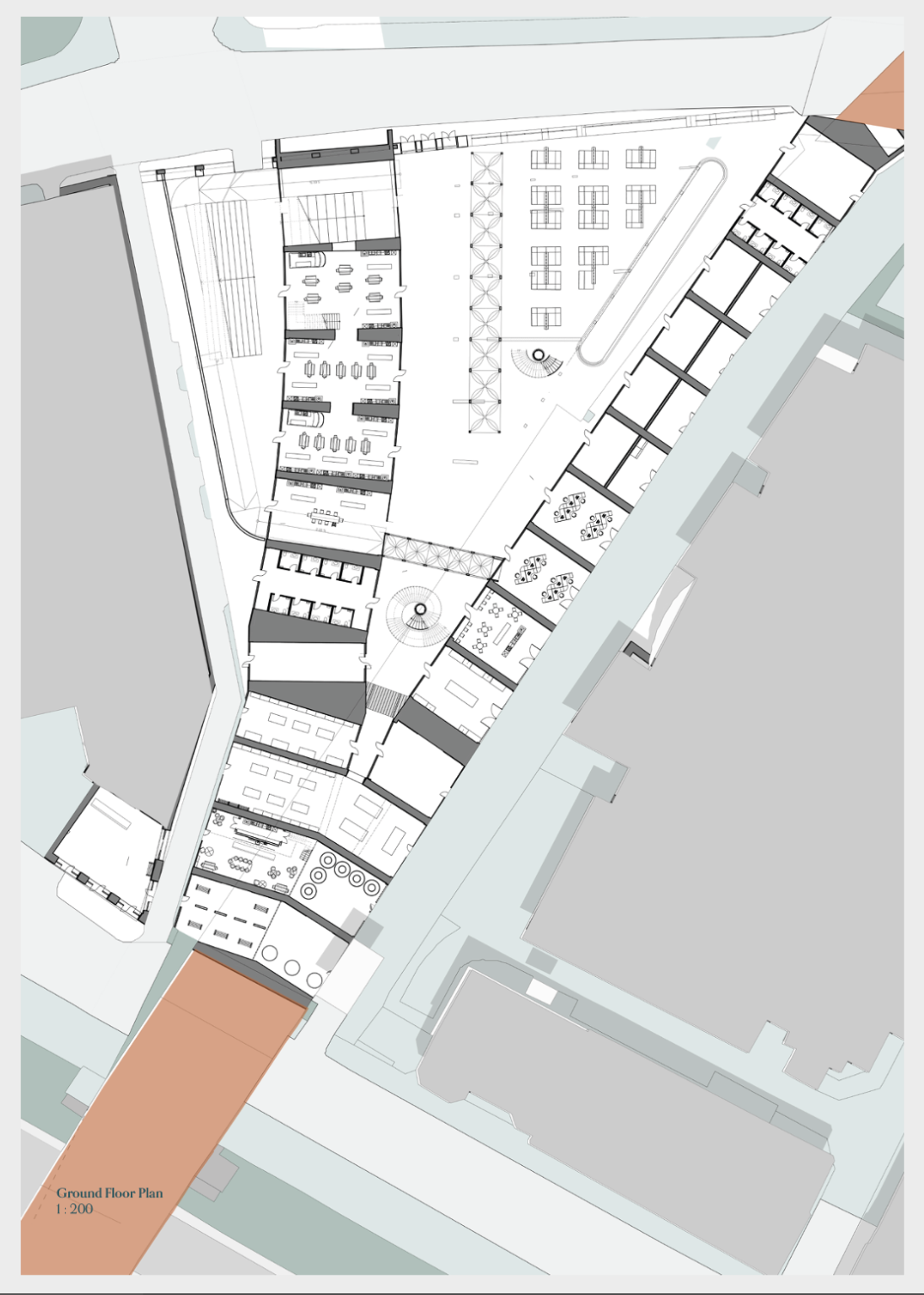 7 of 16
Previous Next
Close 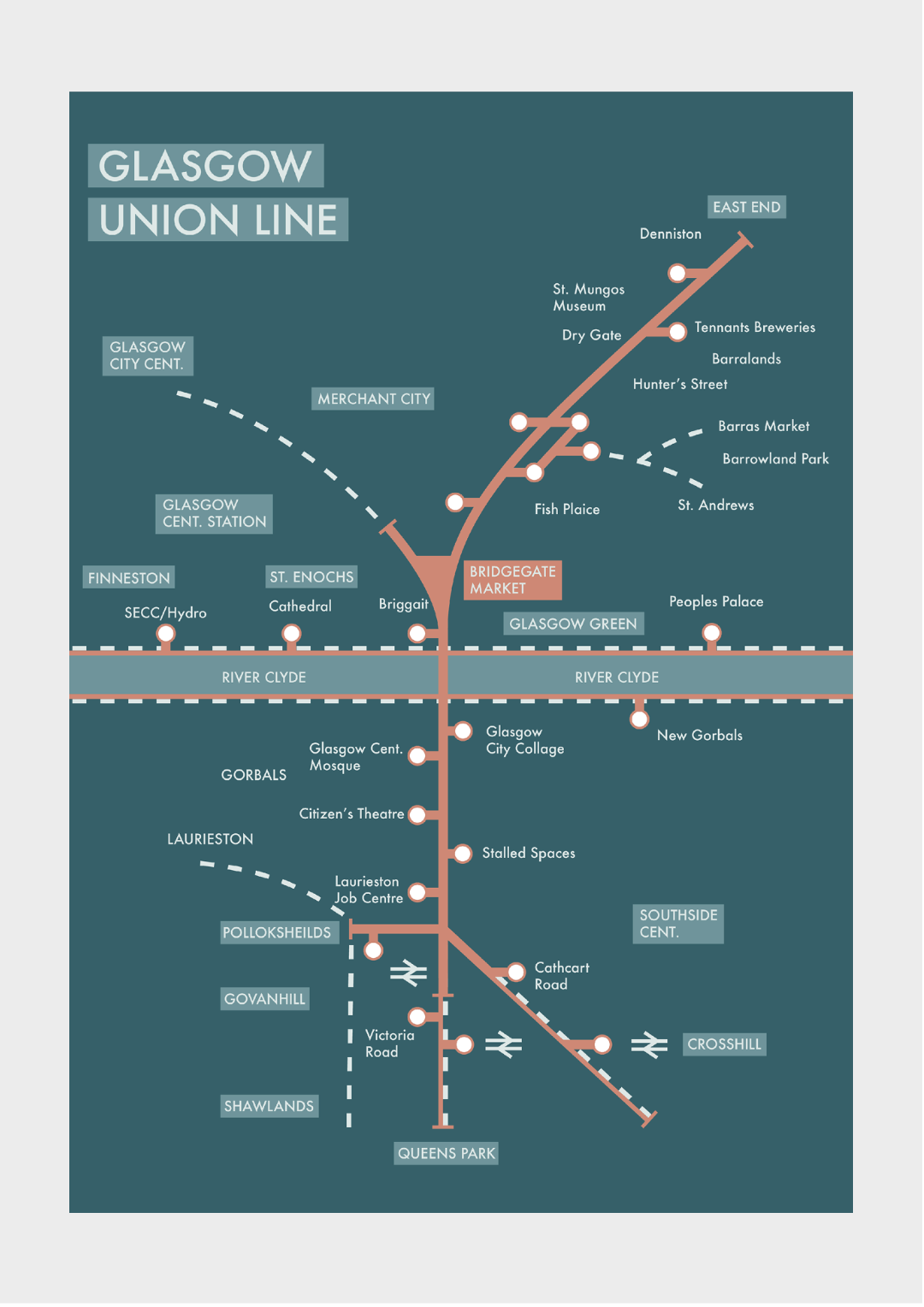 8 of 16
Previous Next
Close 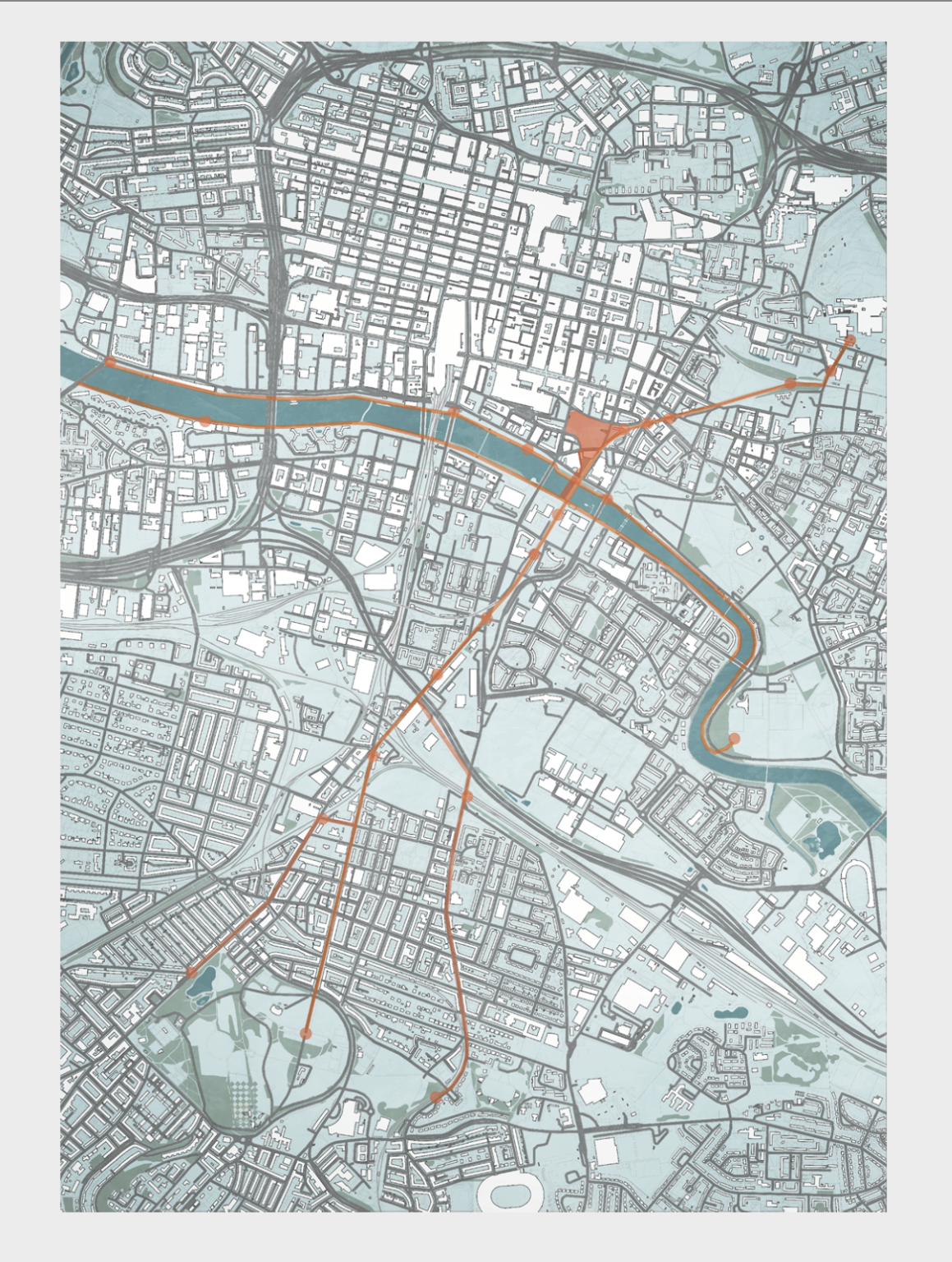 9 of 16
Previous Next
Close 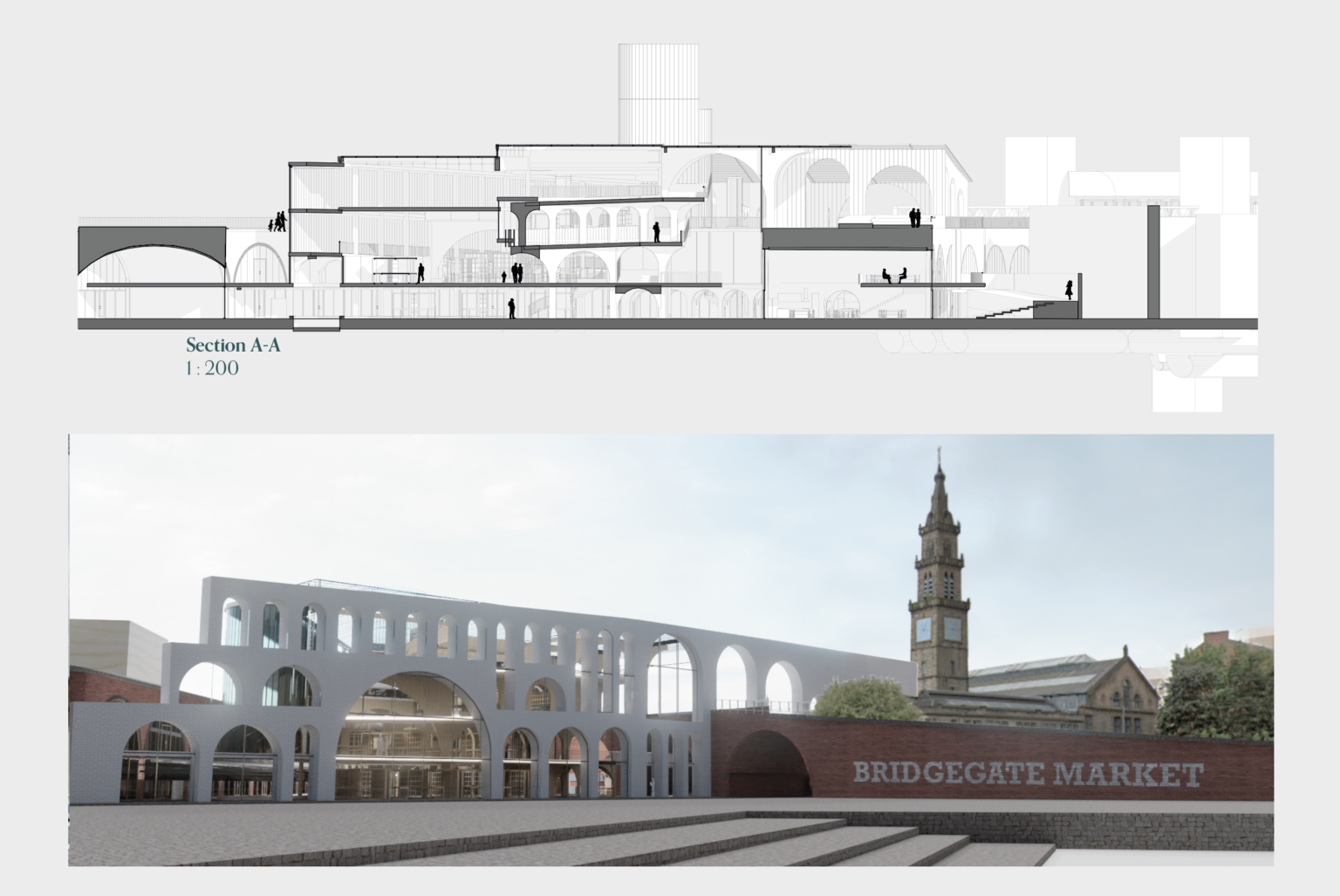 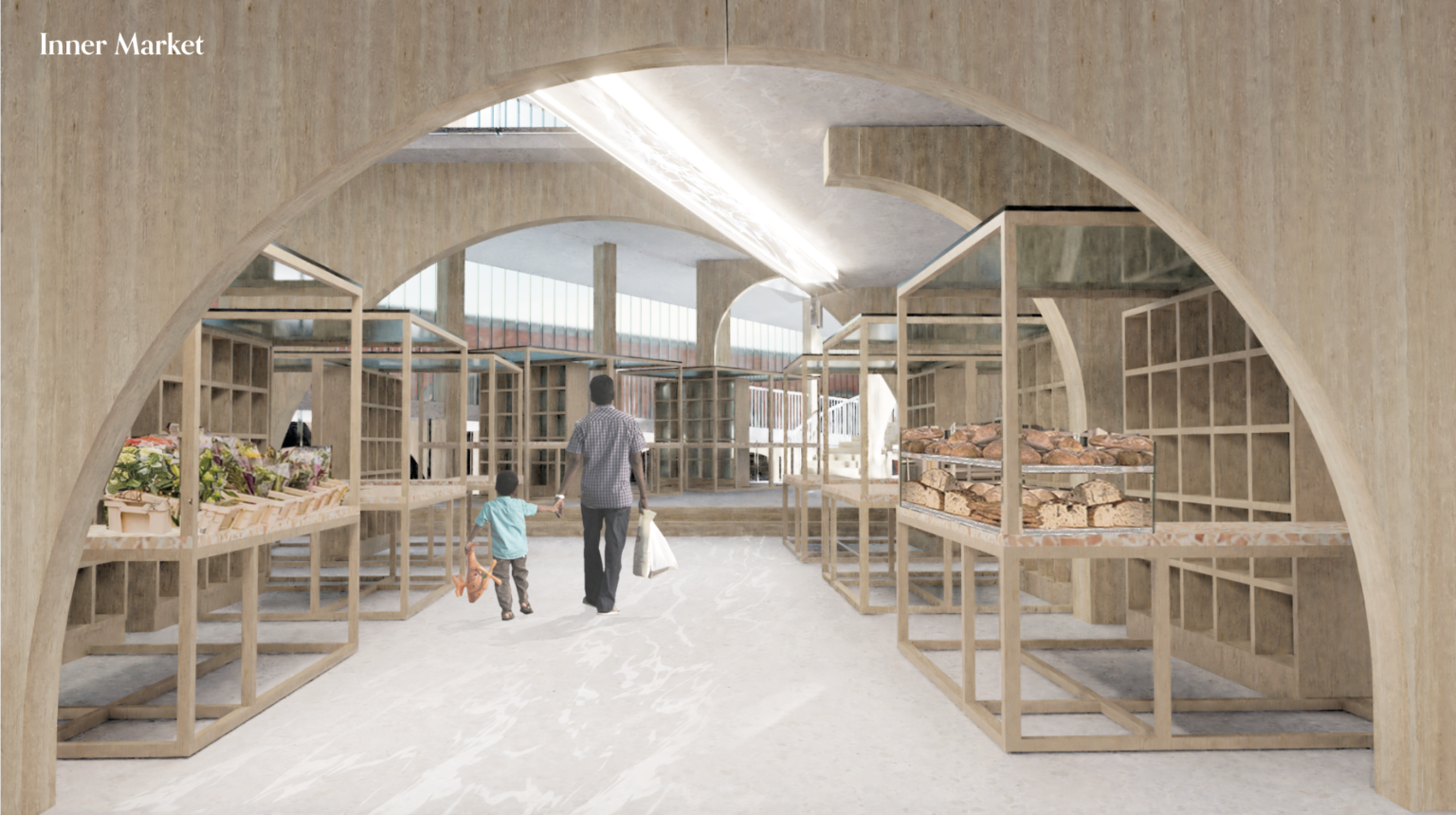 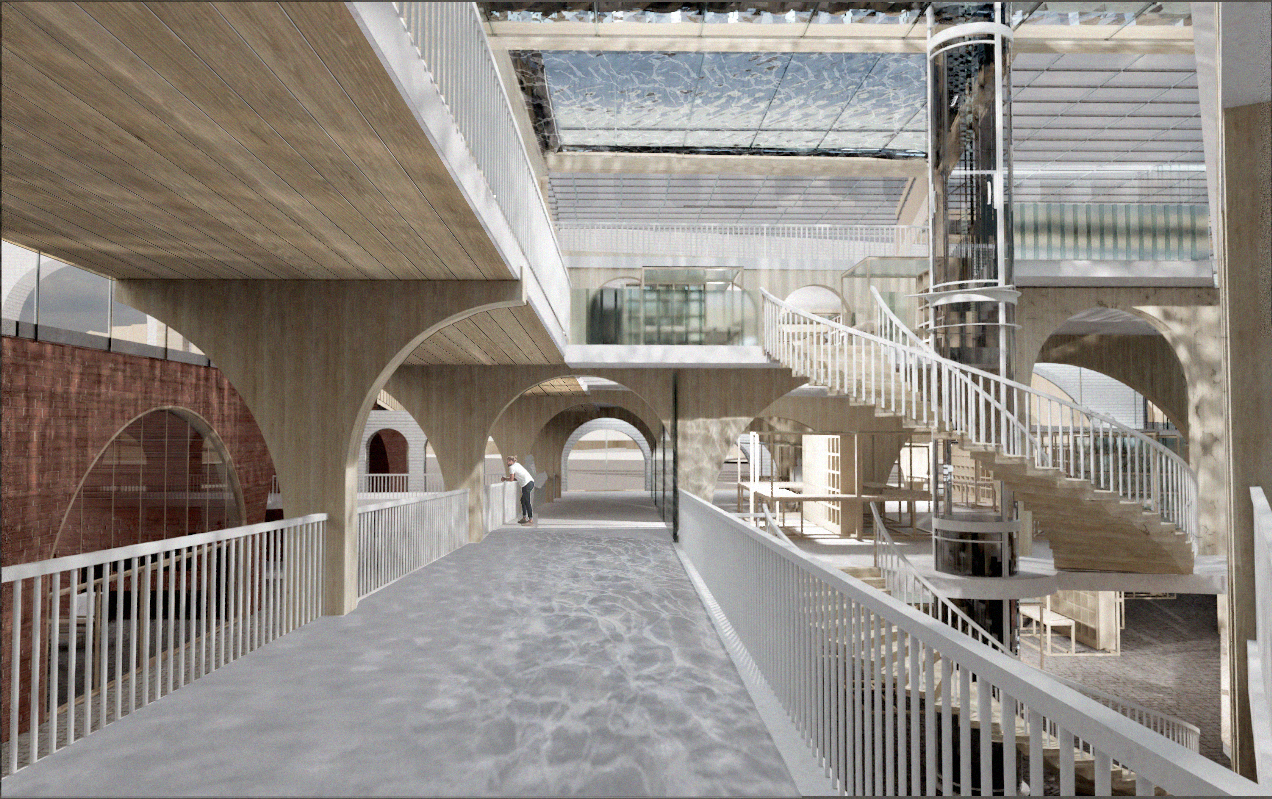 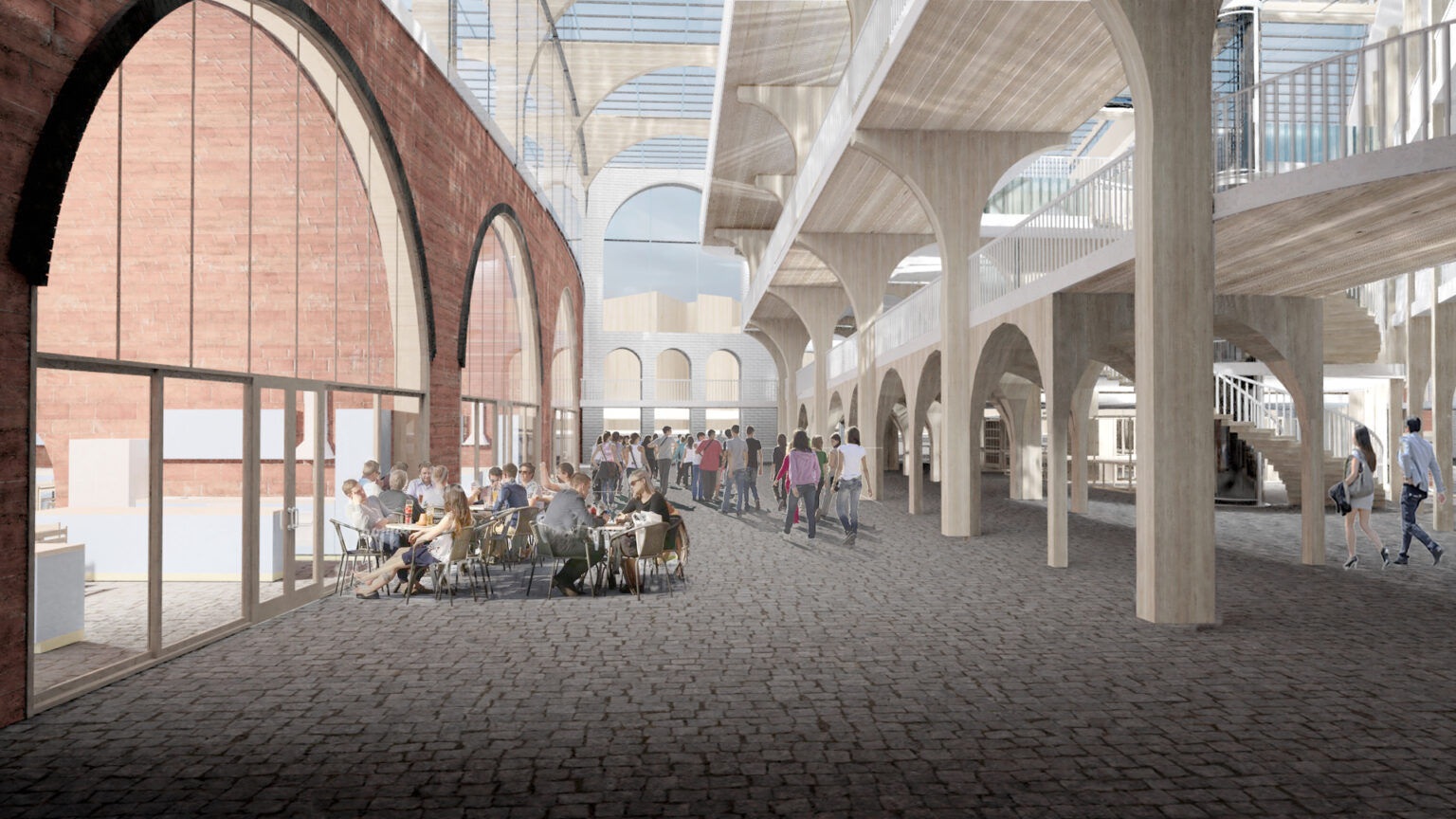 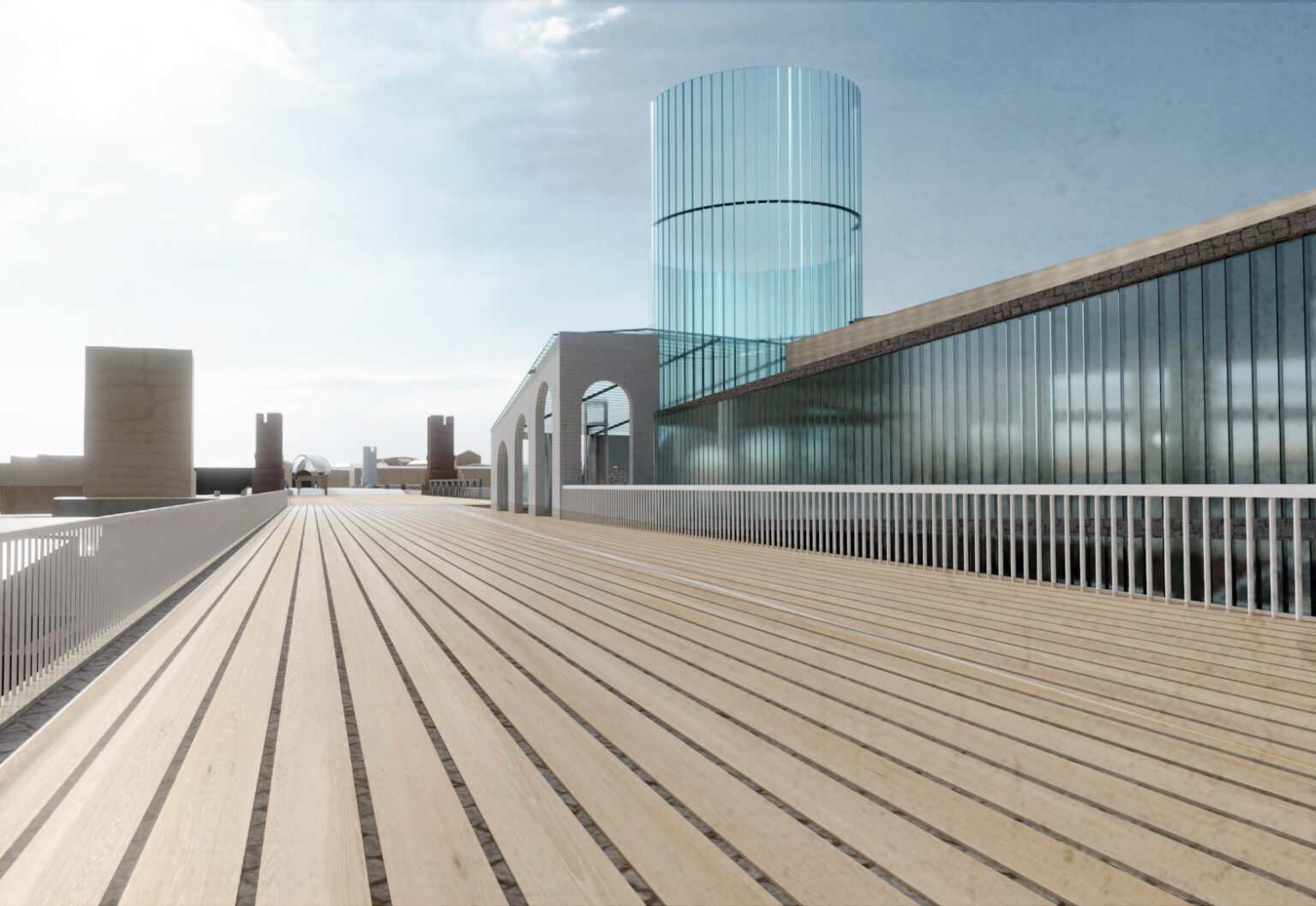