At the beginning of the project I looked at the decline of retail and potential of the high street. During the Self Initiated project this developed into enhancing and sustaining a sense of ownership and community on Sauchiehall Street as we come out of lockdown. My outcome manifests a public project of adaptable spaces taking over the vacant spaces of the city. This relates to my research, insights, trends and current affairs. Starting as a Sauchiehall Street project this could be developed for a Glasgow wide network of adaptable spaces.

There were approximately 75 vacant units on Sauchiehall Street, it doesn’t look or feel good. Even though we see so many vacant spaces in the city there is a lack of space for human interactions, socialising and connectivity. Sauchiehall street  was selected as the initial test-pilot, as it is an area showing large numbers of available spaces and has also seen the decline of business and people in the area. Showing what could be done on Sauchiehall street and developed around the city.

For parts of the project I was somewhat a roving reporter designer with discussions, and design alterations happening openly on the street. My initial research developed as I followed the opportunities, insights and needs of the people, who were my main focus. The ultimate outcome would include partnerships with Future Cities Glasgow, GSA, Artists, Designers and influential locals that could host events and pop ups.

A human centred city, public space that can be arranged, shared, organised through a digital platform. A community exchange and urban takeover. For the people by the people. 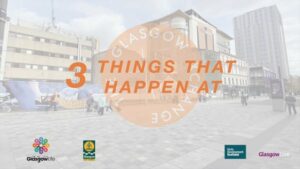 1 - This video shows context to the project and concept imagined. 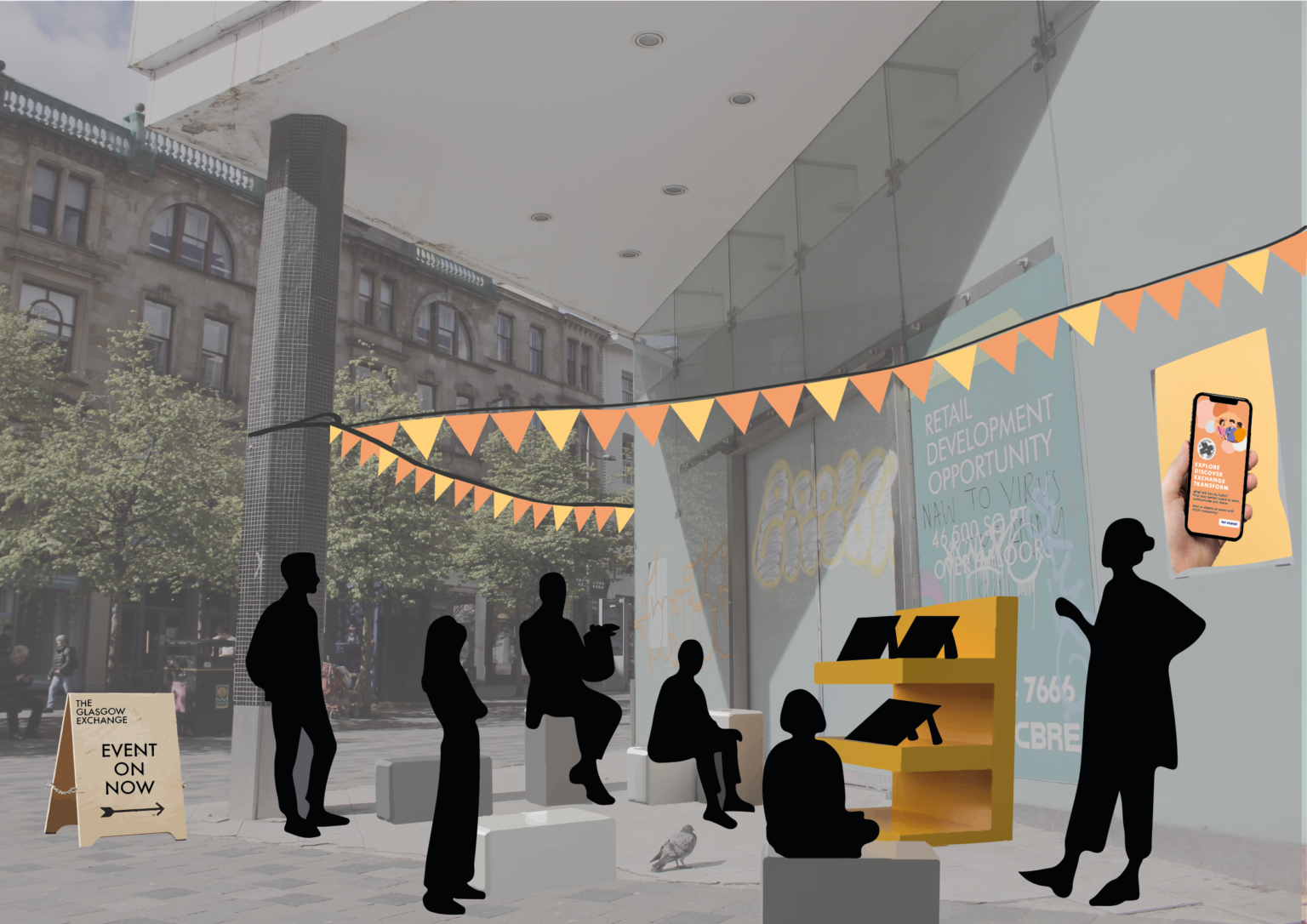 3 - EventBox, hosted outside of a vacant unit

Creative partnerships encouraging local artists, designers, creatives to share their work and use the exchange as a platform to share.
2 of 8
Previous Next
Close 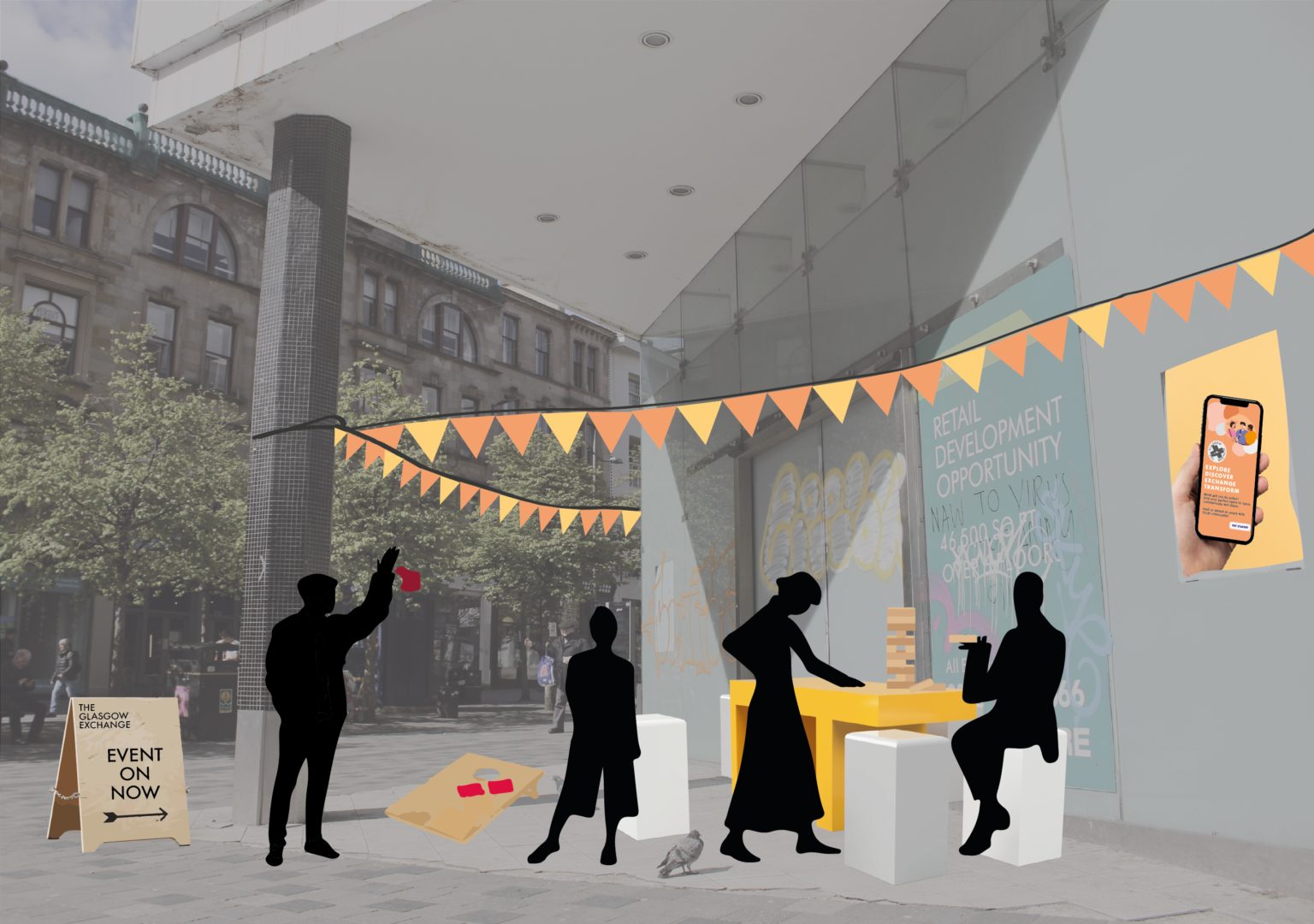 Playful interaction encouraging down time from the hustle and bustle of life.
3 of 8
Previous Next
Close 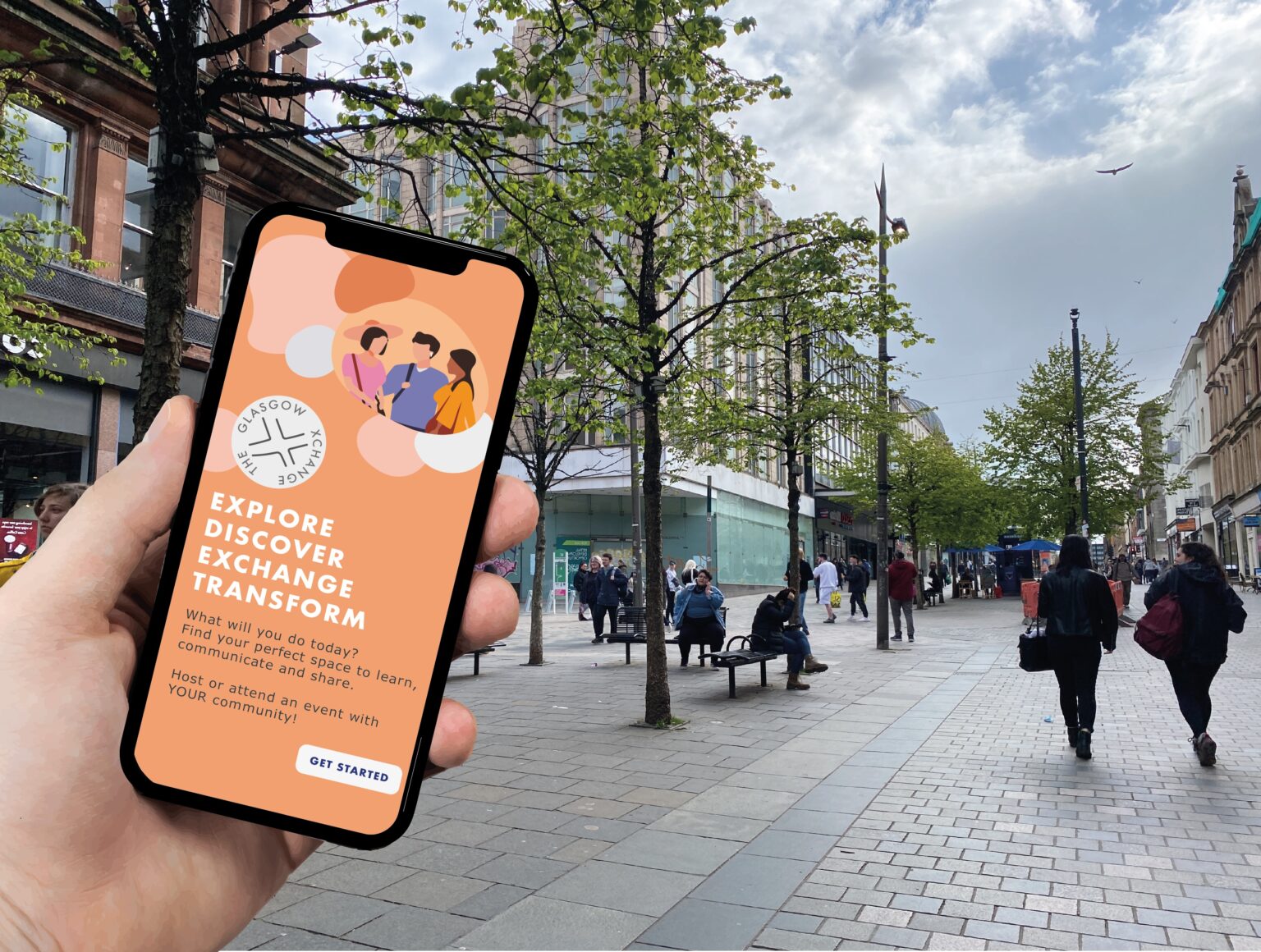 2 - Interface for the digital platform 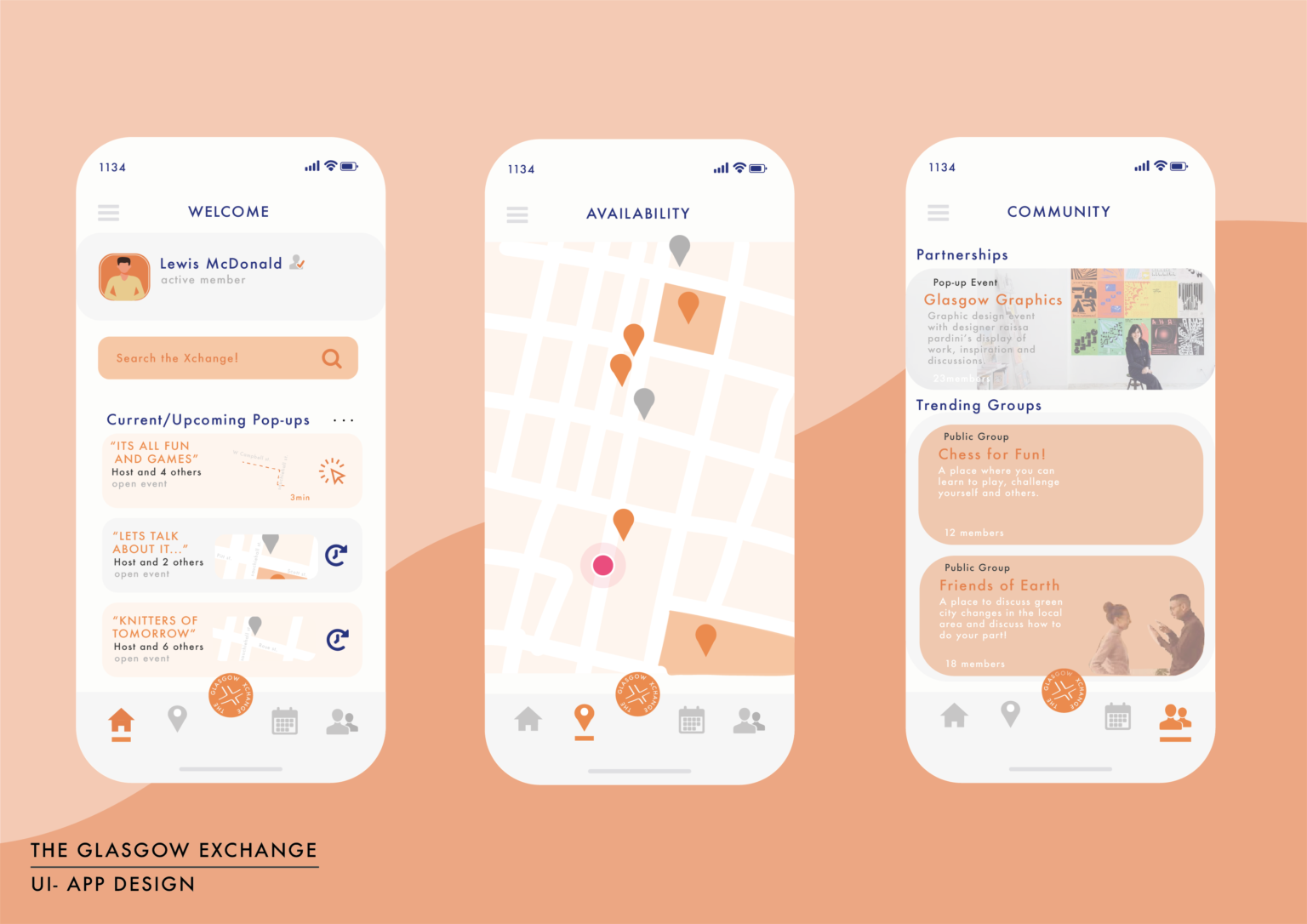 This shows the three main pages accessible to the user.
5 of 8
Previous Next
Close 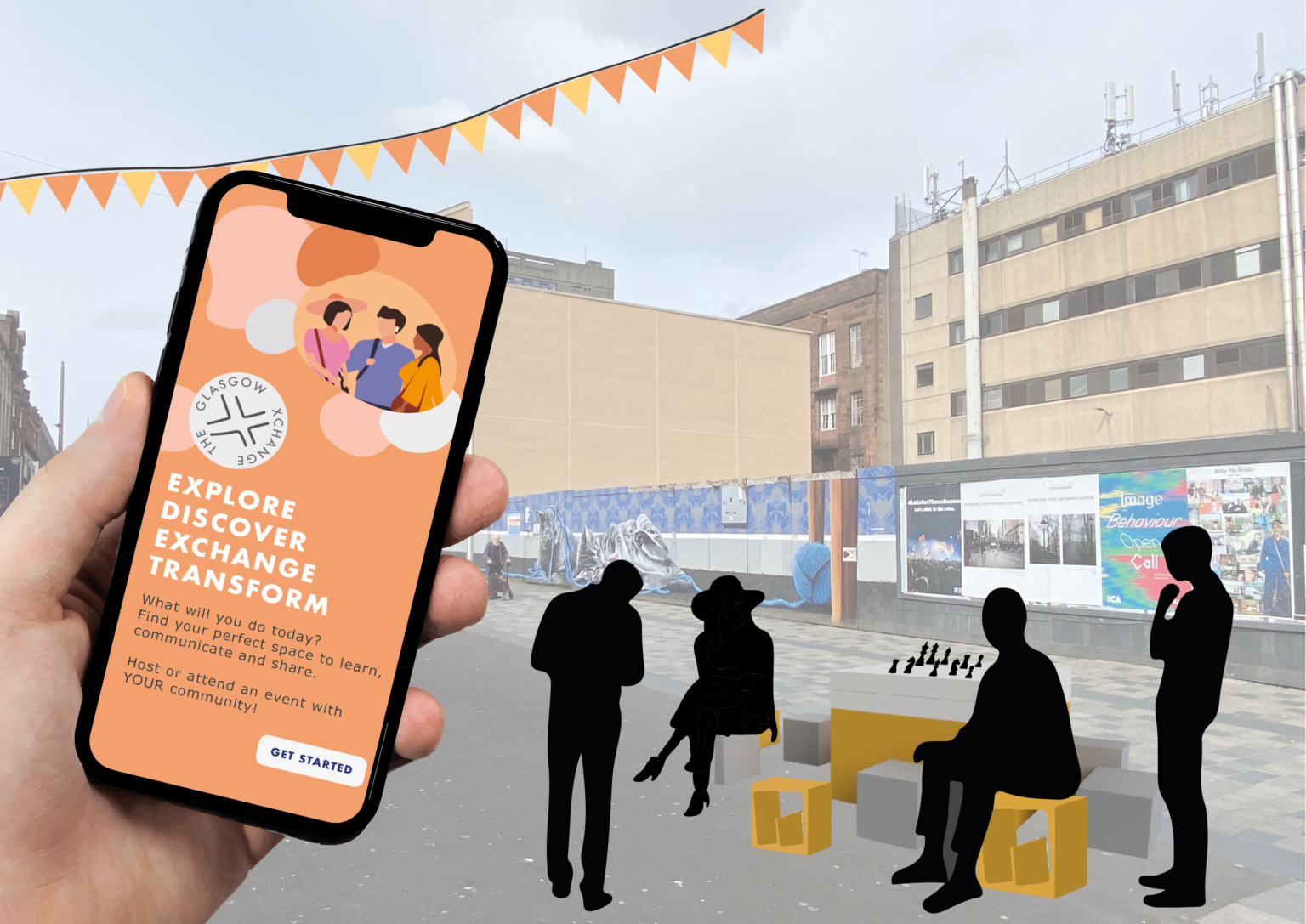