Kampung Lorong Buangkok (KLB) is the last kampung on mainland Singapore. There are plans for it to make way for urban redevelopment as indicated in the Urban Redevelopment Authority (URA) Masterplan 2014. In its place, the kampung is supposed to be replaced by a 3-lane bi-directional highway, 2 schools (primary and secondary), and a public park. Much heritage will be lost. What our future generations want from an urban environment are fundamentally the same as everyone else today: safe and clean streets, access to green space, clean air, things to do, the ability to get around, the freedom to see friends, and somewhere to call home. Therefore, the design challenge is to produce viable, feasible and desirable proposals for the KLB site through speculative design.

Secret Eden
Kampong Lorong Buangkok has been described as a secret Eden, a jarring sight amidst the mass of modern, and pristine apartment blocks. The romanticism of the simplistic nature of kampong life has led to many fighting for the preservation of the ‘safe haven’. Having long withstood the allure of progression, its resident chooses to retain the community and way of life that it so cherishes.

The kampong spirit that many in concrete grid-like apartments yearn for is something that prevails in the haphazard kampong to this day. However, we seek to preserve the physical shell of the kampong, almost as if it holds the secret to attaining kampong spirit within its walls. We act like retaining its shell guarantees that future generations would be able to learn from our pasts and understand their roots.

To this assumption, we must challenge the notion that the physicality of the kampong allows them to immerse in the kampong life. Does the retention of the physical buildings translate the simplistic way of life, the community unique to kampong, and the rejuvenation of being surrounded by natural elements bode well in translation across generations? 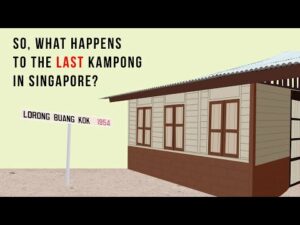 The last kampong in Singapore

Recorded video presentation showcasing our proposal on how we should sensitively approach the 'conservation' of the kampong and its essence.