The Acropolis of New Industrial Education

This thesis aims to respond to two juxtaposing ideas that are present within the city; former historic industrial districts, with a now forgotten identity and unoccupied vacant land, and Glasgow’s current ethical and sustainability ambitions, which are recognised both nationally and internationally. Reflection and research emerged as two key ideas, defining two distinct buildings of education.

Historical analysis and empirical data formed the primary methodology and research, coupled with contemporary analysis into Scotland’s, and specifically Glasgow’s efforts to tackle the climate crisis. My focus narrowed to Port Dundas, separated from the rest of the city by the M8. This area became a site of intrigue; it was once a dominant figure at the height of industry; however, little remains of its fundamental role other than a few remnants scattered across the landscape. It came as no surprise that deprivation intersected with the loss of industry here, and further research uncovered the alarming statistics of low education rates, fuel poverty and derelict land. This topic became important to me, having grown up in the former mining village of Muirkirk, 43 miles south-east of Glasgow and witnessing first-hand the impacts of that the sudden departure of industry had on its people and environment.

Scotland is fast becoming the testbed for new and exciting sustainable energy and technology solutions – some of which are currently taking place in Glasgow, the city which will proudly host COP26 this year. Glasgow is active in its role tackling the climate crisis, and this realisation became a key element in defining the topics of ethics and sustainability within the thesis.

The proposed buildings and linear parks hope to create spaces of reflection, energy production and contemporary research, offering new opportunities for education and renewable energy solutions to power the buildings themselves and the wider context north of Glasgow. The Building of Research becomes a place of ‘active’ learning through workshops, laboratories, classrooms, an informal lecture space and functioning water tower. The Building of Reflection celebrates industry at varying levels: district, city-wide and nationally. It comprises galleries and exhibition spaces, archives, and libraries – spaces of ‘passive’ learning.

The architectural technology thesis is embedded within the proposal. The linear park will supply ‘Green Heat Energy’ through the use of ground source heat pumps installed underneath the park, re-thinking our vacant land through familiar building and technology strategies, while providing a new park typology and enjoyable green spaces in the city. 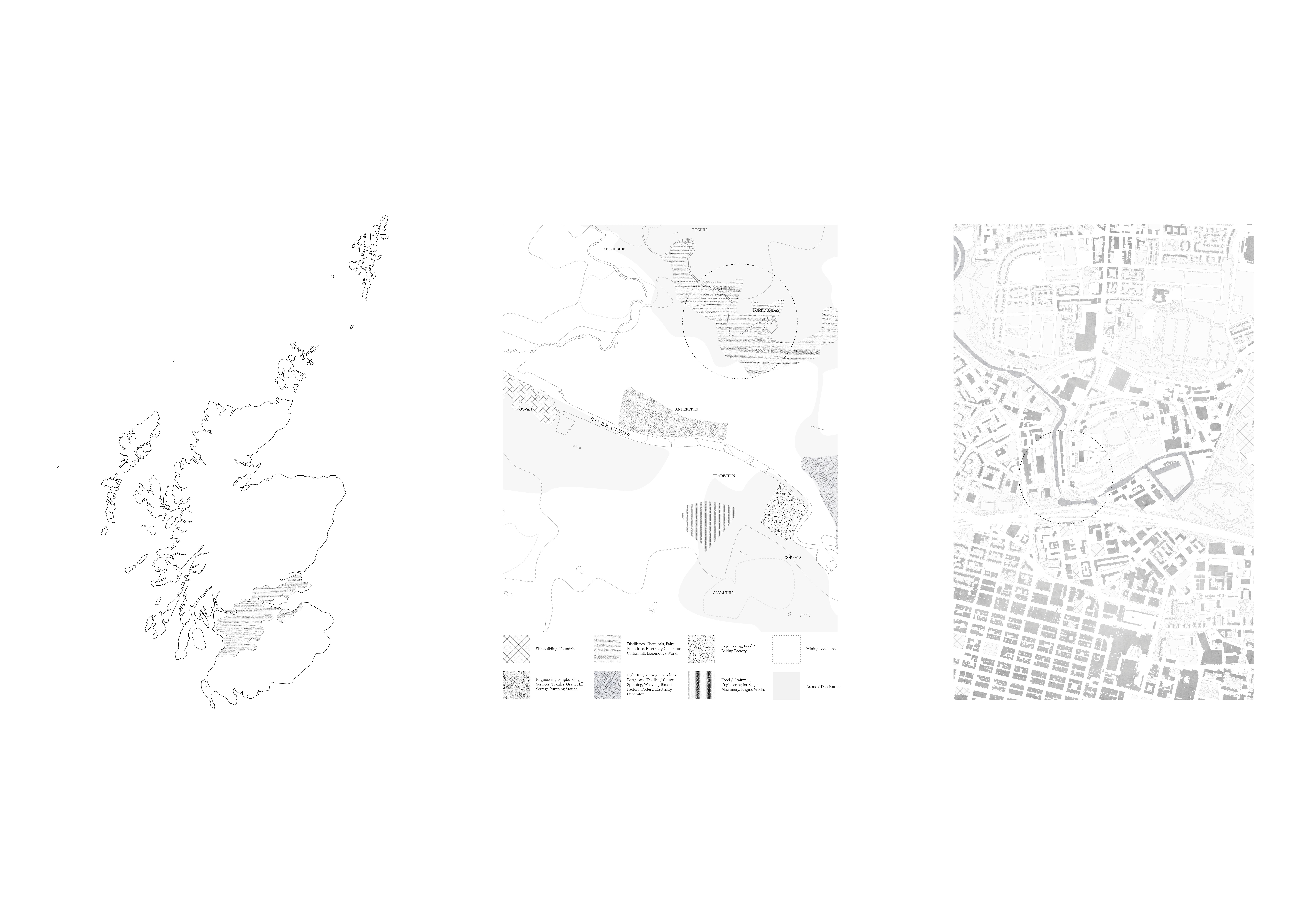 Scotland's band of industry indicated along the central belt; industrial districts that once defined places and communities through labour; Glasgow’s density diminishes towards the north at Port Dundas
1 of 12
Previous Next
Close 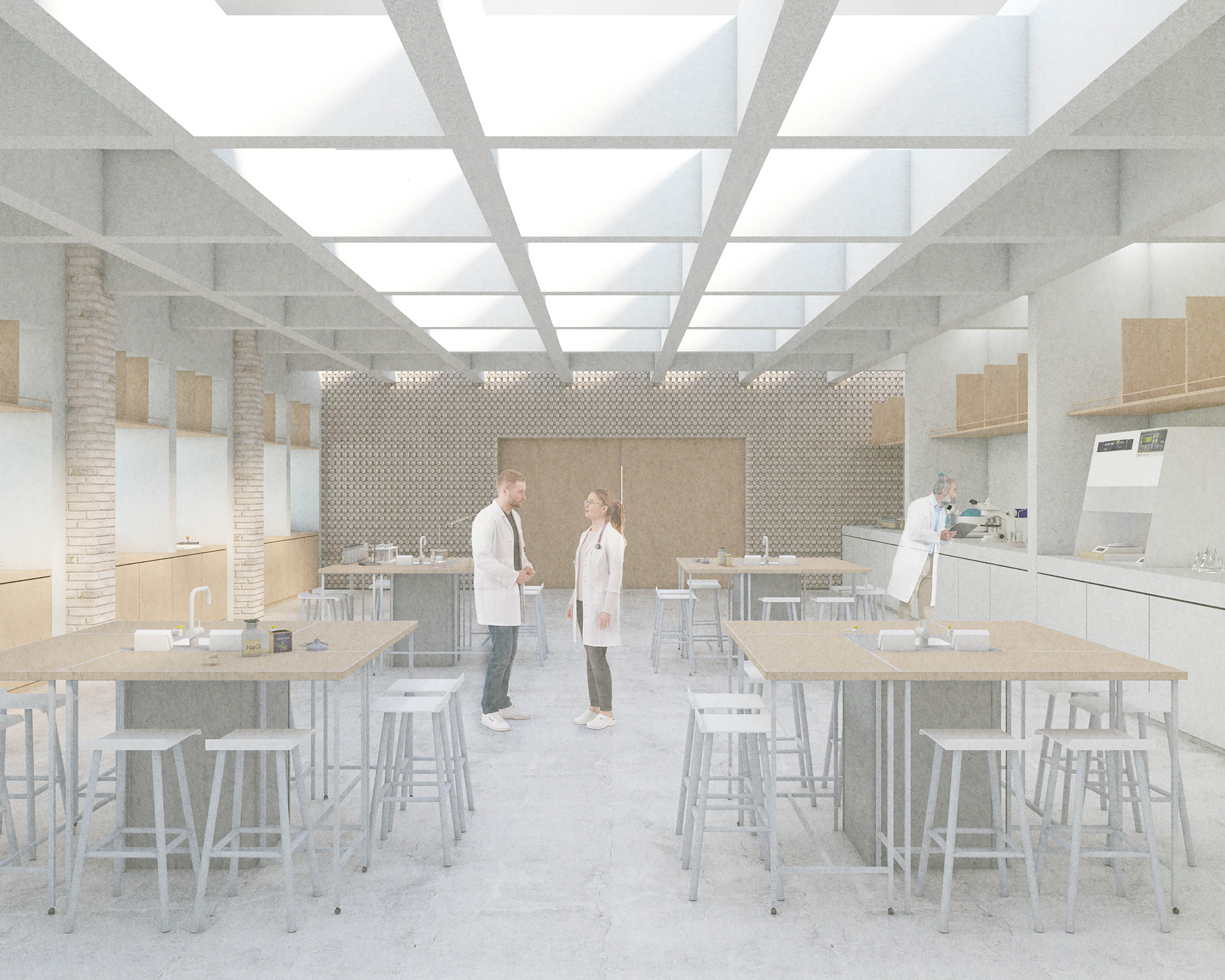 Testing, creating and growing sustainable materials to be used in the studios, classrooms and workshops.
2 of 12
Previous Next
Close 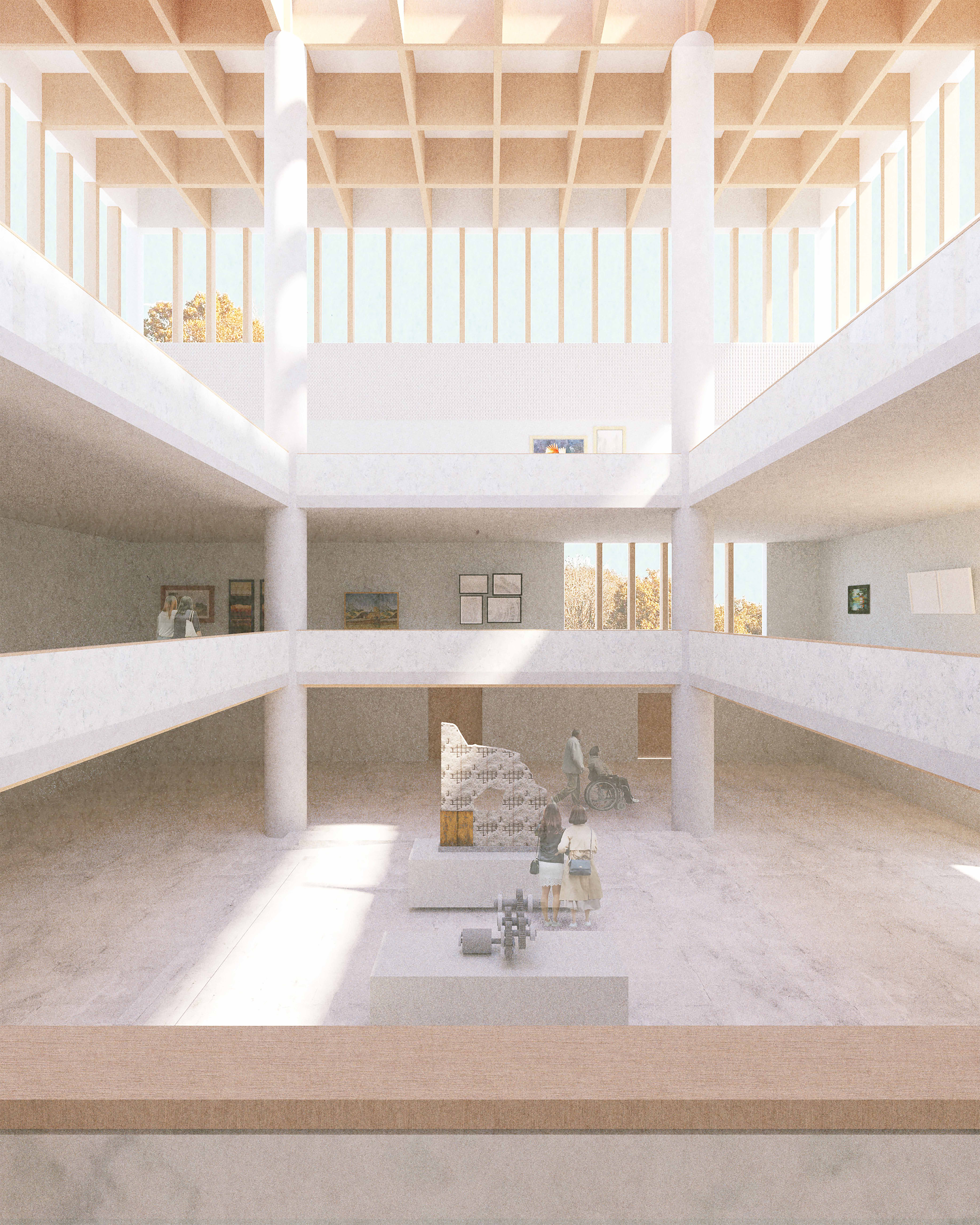 An exhibition space to show reverence to the satellite towns and villages that forged the city of Glasgow.
3 of 12
Previous Next
Close 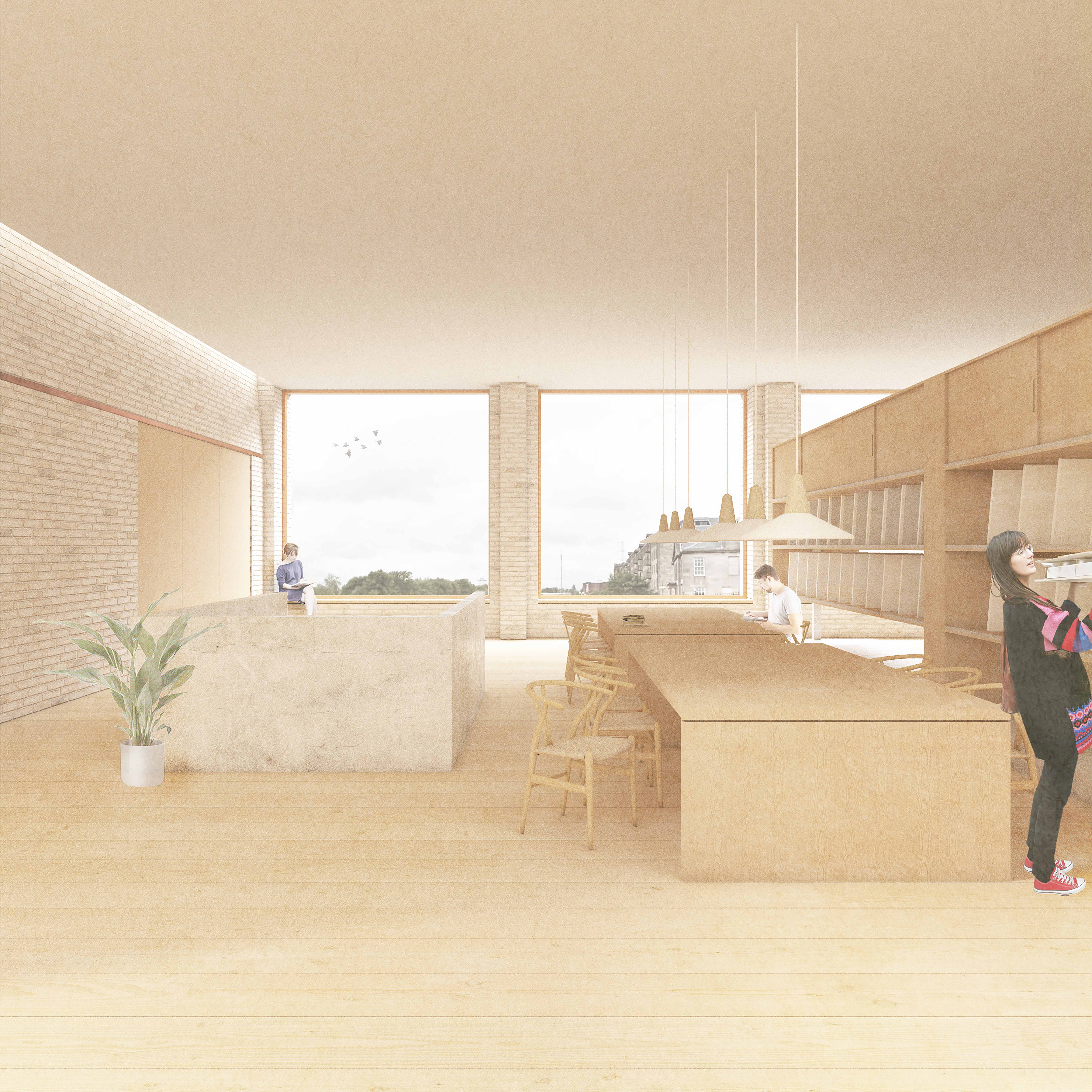 A Place of Material Reference

A collection of old and new, composite and recycled materials used in the laboratories. This is a place of collective learning for private and public use.
4 of 12
Previous Next
Close 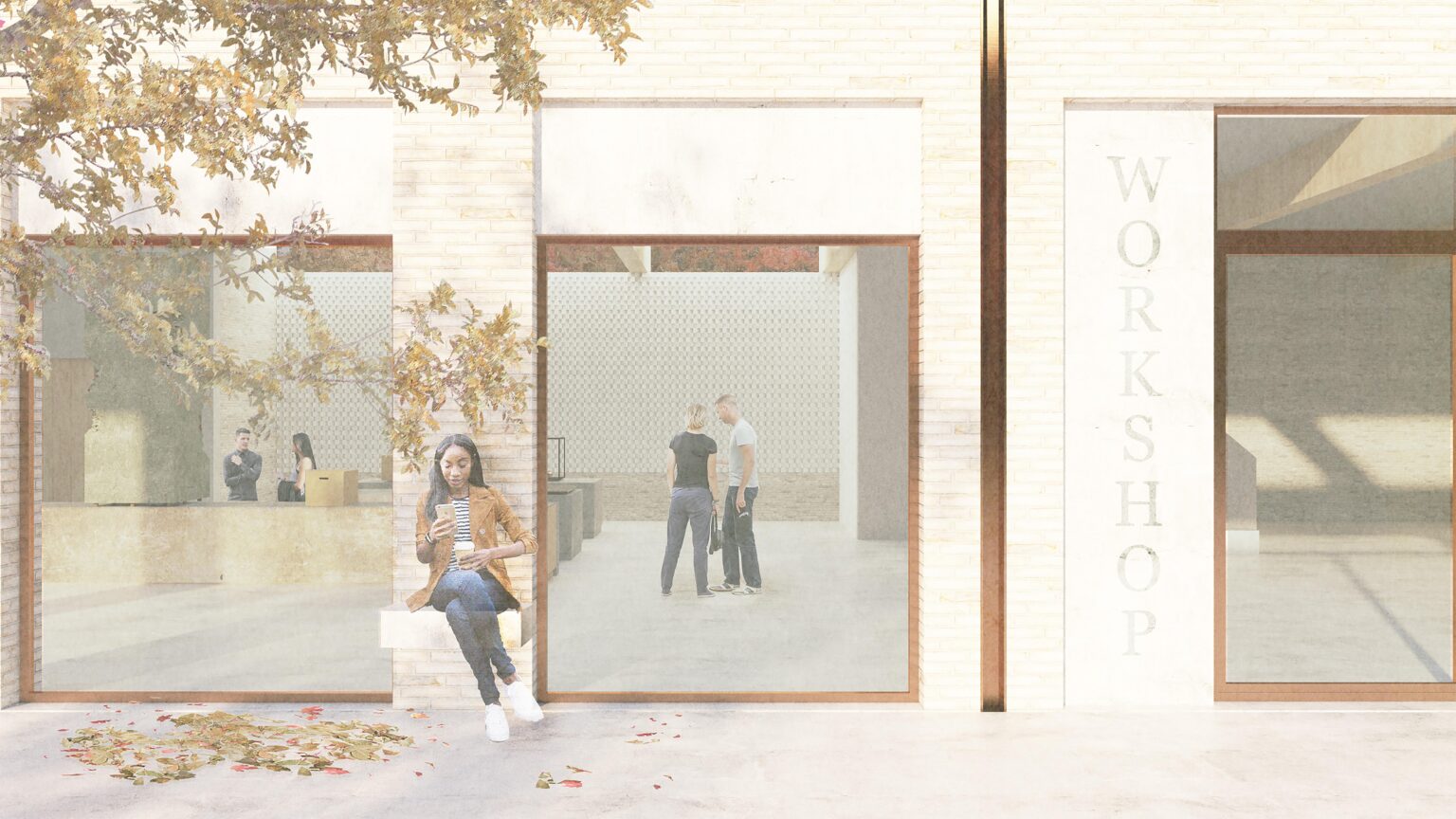 A space for the restoration of important historical artefacts of these lost industrial districts.
5 of 12
Previous Next
Close 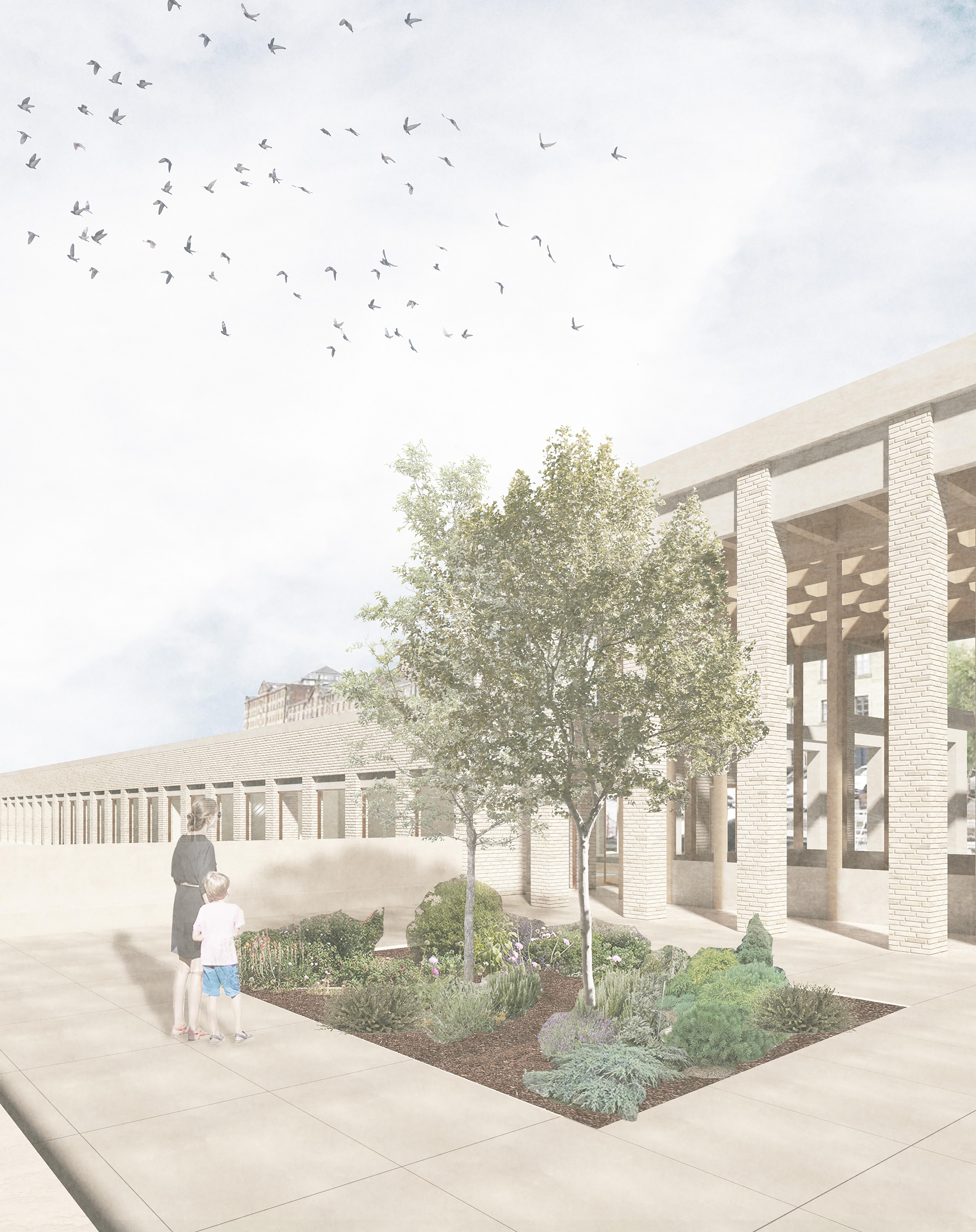 Quiet moments to pause by the canal.
6 of 12
Previous Next
Close 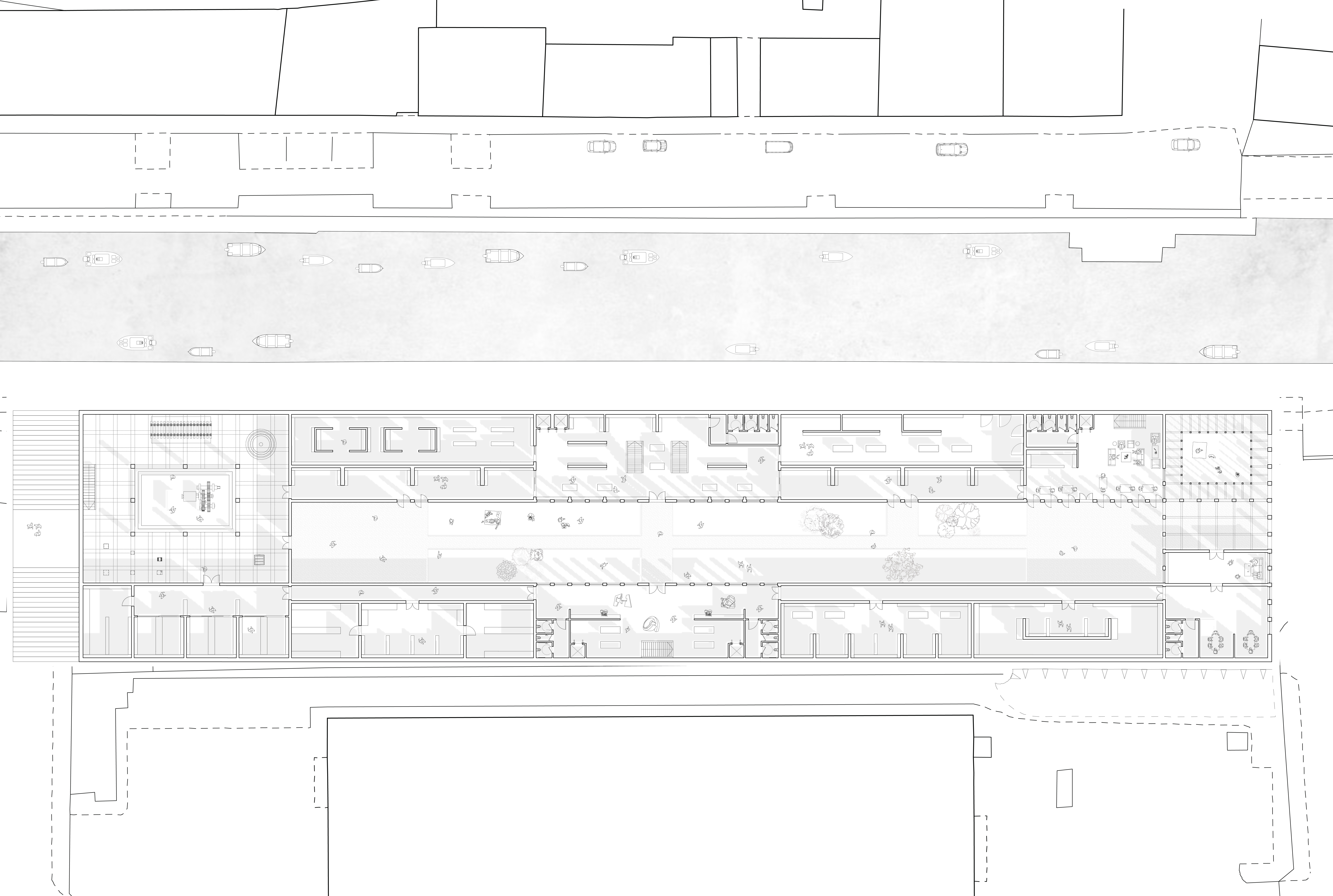 This main civic space occupies a vacant, post-industrial plot by the canal, where there once stood the Port Dundas Electricity Generating Station. It supplied energy to the north of Glasgow, utilising the Forth and Clyde Canal for cooling purposes and the important transportation of coal and iron ore. Archive rooms are placed methodically to ensure the optimal conditions are maintained, such as facing north away from direct sunlight and excess heat gain. These spaces are placed opposite a particular library room relating to the archived materials. The Paper Archive, protecting books, maps and family trees for example, faces the Social Aspects and Historical Library, where there is a direct intrinsic relationship and function between these spaces. The linear arrangement of the archive and library rooms are connected visually across the courtyard.
7 of 12
Previous Next
Close 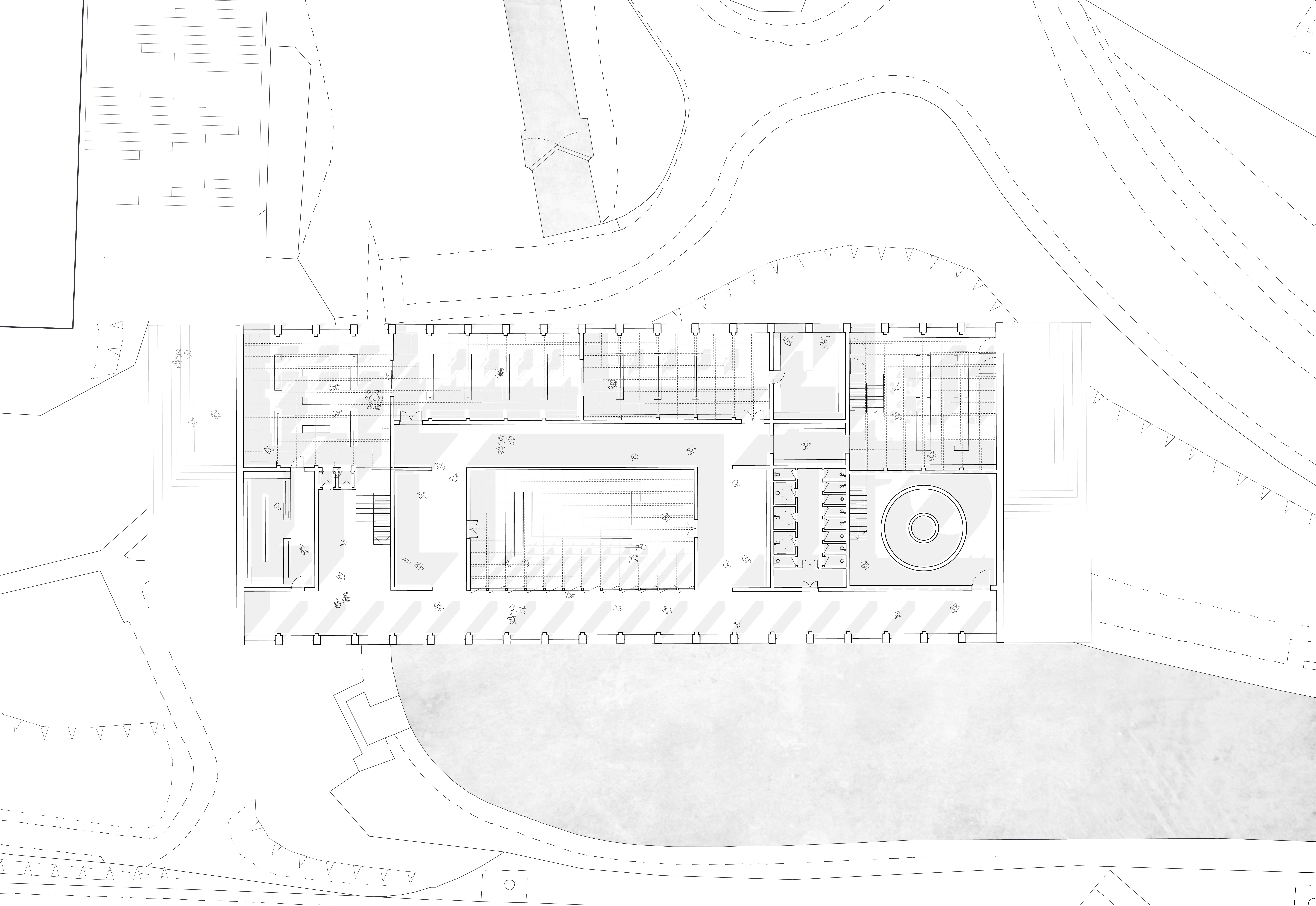 The research facility creates a bridge over the existing canal and basin, linking the main city centre pedestrian routes to the site at Speirs Wharf. This building creates a vista from the northern edges of Port Dundas, being visible from afar, with the functioning water tower acting as a monument within the city. The informal lecture creates an open environment for students as well as members of the public to participate in discussions. The lab spaces continue to experiment with new materials, from recycled, composite to grown organic substances such as mycellium or hemp products. The water tower provides for not only the services within the building, but the adequate supply necessary for the functions of the labs and workshops below. These spaces are placed in accordance with how much water is required for each room, such as the Organic Matter Lab, being placed directly beside the water tower, allowing the water to travel a minimal distance before being used to maintain passive energy strategies throughout the building. The material library is predominantly used by lab technicians and students on this floor.
9 of 12
Previous Next
Close 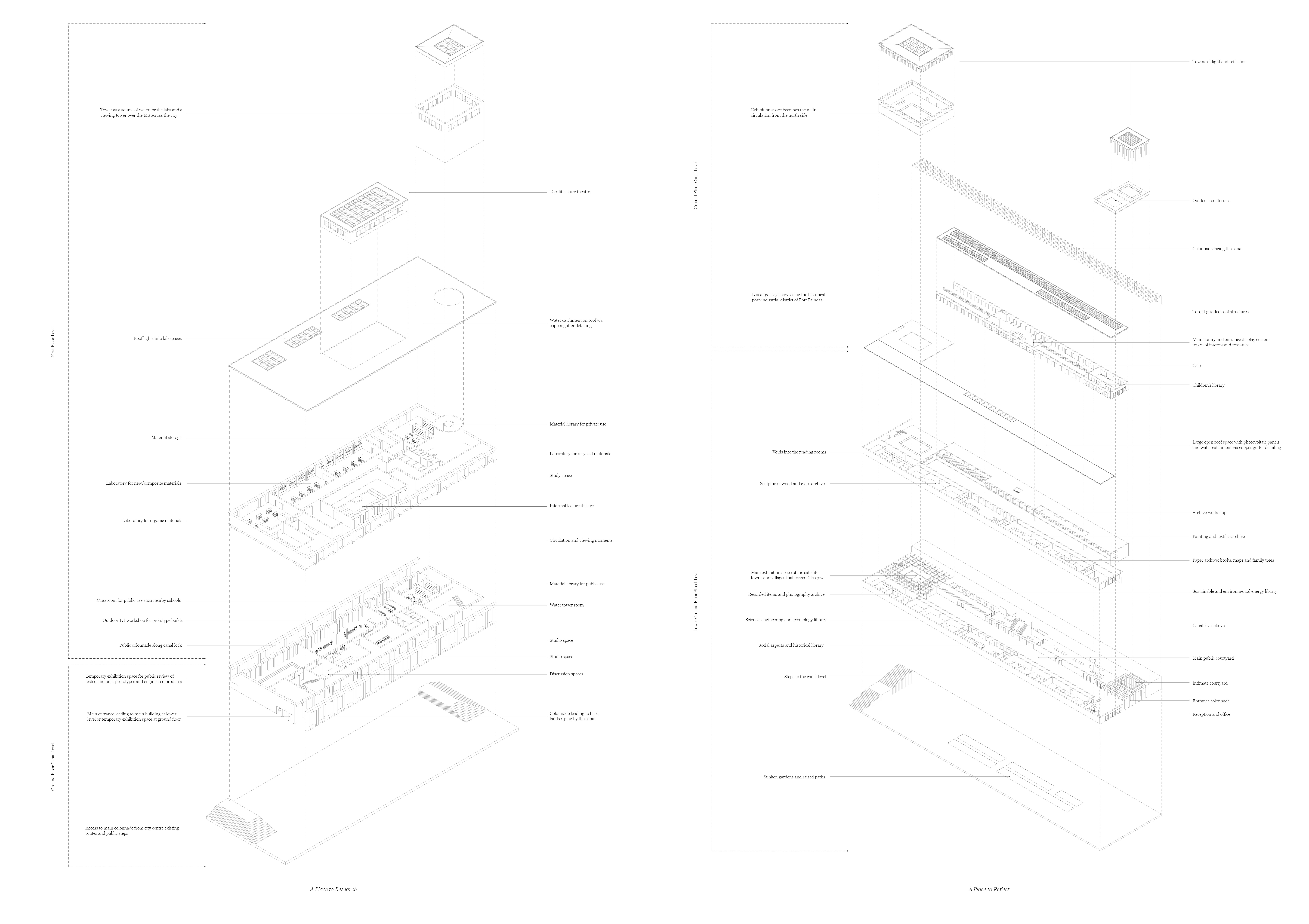 To Research and Reflect

The Acropolis of New Industrial Education - Living Fossils: Power, People and Place
12 of 12
Previous Next
Close