The Barras Market in Calton, Glasgow is not just a place for buying and selling. It has become a culture in itself. A microcosm, separate from the centre of Glasgow, where the idea of the civic, of interaction and of story telling is almost more important than the physical aspects of the city itself.

Therefore, in recognition of this and to further my project three thesis which focused on passing knowledge down through the generations I have investigated this exchange of stories that accompanies the exchange of goods at the Barras Market through a proposal for a:

This analyses the architectural interface of Performing, Exchanging and Memorialising stories.

The Concrete poetry ‘Archives’ by Edwin Morgan became integral to the concept of my building as the letters of Generation upon Generation, fade out in recognition of a forgetfulness that accompanies story telling by word of mouth. I propose to counteract this through my Barras Archives.

A proximity to Glasgow green saw the opportunity for a reintegration with the city. Upon tracing this route on an initial site visit, the lack of intent this connection currently has was made obvious at the corner of London Road and Bain Street. This is the first point of contact with the Barras upon emergence from the green, it is disheveled and off putting- making it clear that there is impetus for development here.

The green not only connects the Barras to the city physically but notionally through its centrality to Glasgow’s historic industries at the time of the highland clearances. It therefore layers a cross cultural and recreational story telling back onto the Barras via proximity. This layering of stories and connection to industry underpins the key concepts of my proposal. 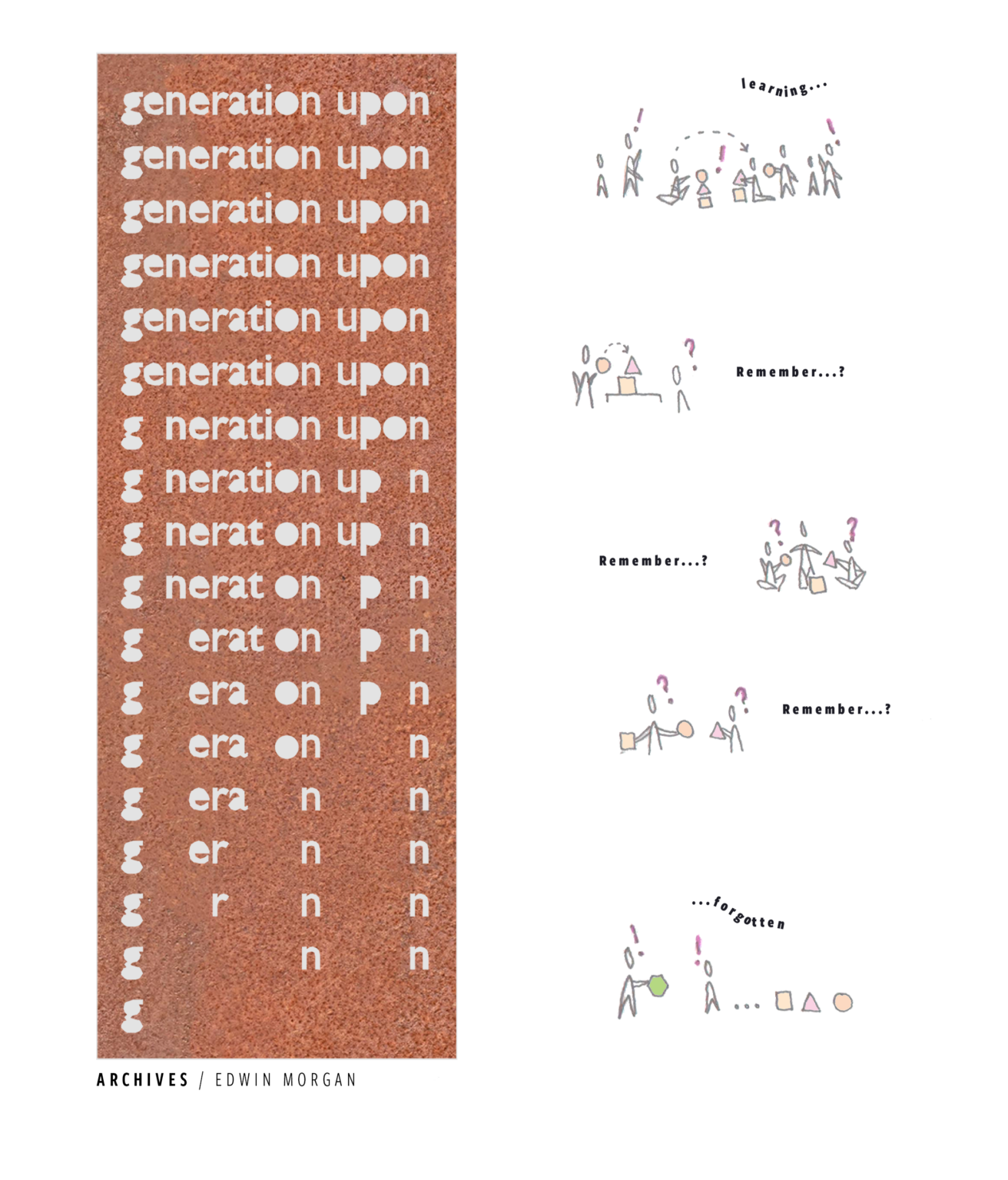 The concept of the poem inspired the proposal for The Story Telling Archive in the Barras.
1 of 14
Previous Next
Close 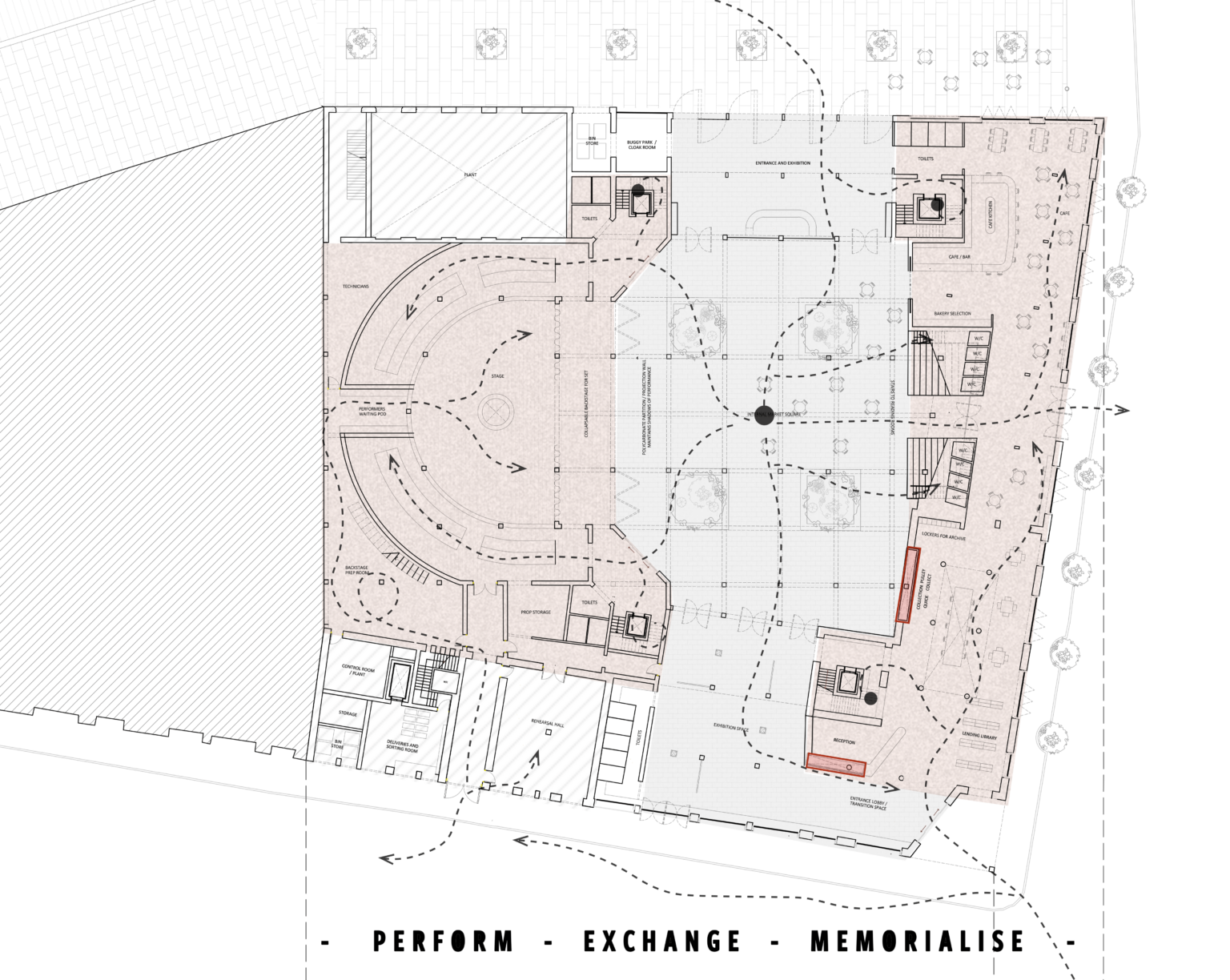 The plan is split between the headings, performing, exchanging and memorialising. The exchange of stories as the beginnings of the archival process has been centralised in the plan as in internal market courtyard which acts to draw the Barras Market into the space and root the building in its context
2 of 14
Previous Next
Close 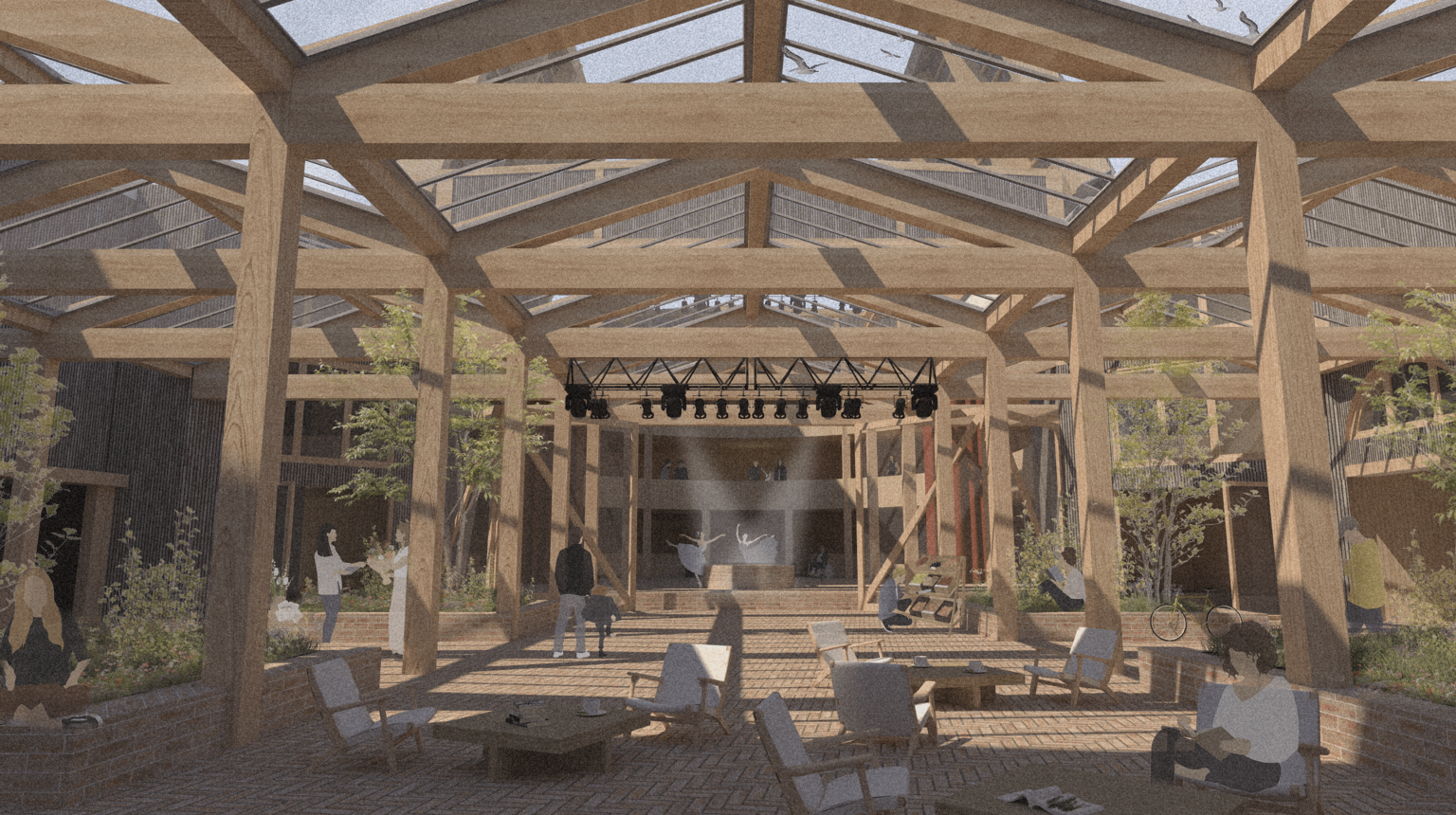 This courtyard is then sandwiched between the theatre and the archives- It was crucial to orientate these spaces to be perpendicular to the courtyard to allow for long enfil-aid-ed vistas linked by the theatres bifolds and the feature staircase up to the archives. These layers of views which highlight the layers of storytelling penetrate, through to the external façade through glazed arches. These draw people in to the space and break down the elitist associations with archives encouraging the idea of entry without the need of an invitation.
3 of 14
Previous Next
Close 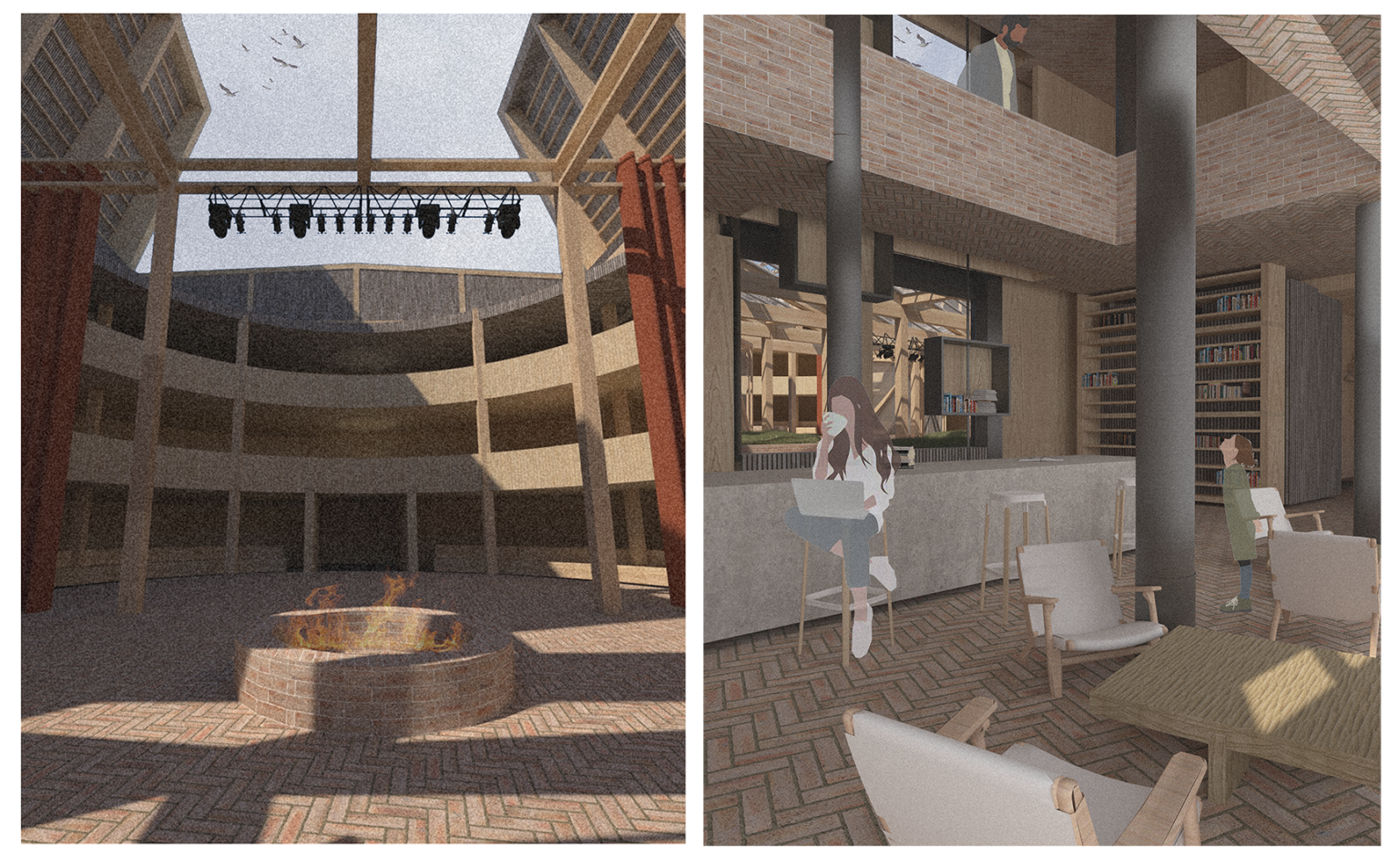 To continue this linear connection into section, the archives and theatre are both linked vertically. In the archives this is achieved through 4 pulley systems which act to transport the artefacts down from the upper-level storage to the reading rooms. They are positioned to be seen from the central courtyard for programme legibility. Thematically, they are inspired by the historic use of Glasgow green as a drying ground where long washing lines were cast across the park -this concept has been transposed vertically here to link the archives with its context. The knowledge that is passed down in the pulleys is spread horizontally in plan where it meets the theatre. The stage is visible from the courtyard for performances of adaptable scale and features a central firepit symbolic of traditional story telling around a fire. The defining feature is its mechanical roof which dramatically draws the eye upward to reconnect the visitors with their context. The open air aspect of this roof acts to acoustically layer context through the sounds of the market onto the performance.
4 of 14
Previous Next
Close 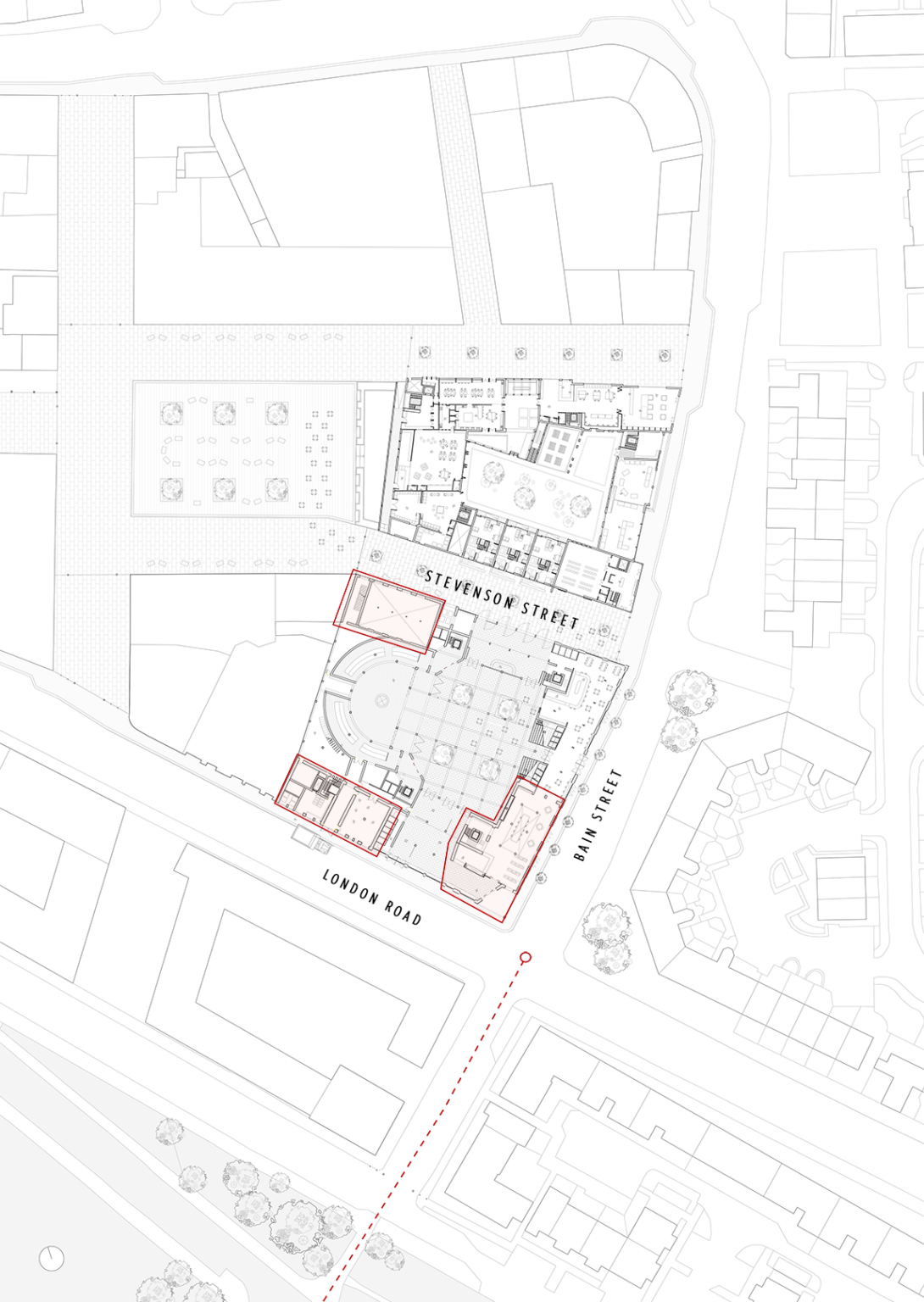 Connecting to Glasgow Green
5 of 14
Previous Next
Close

7 of 14
Previous Next
Close 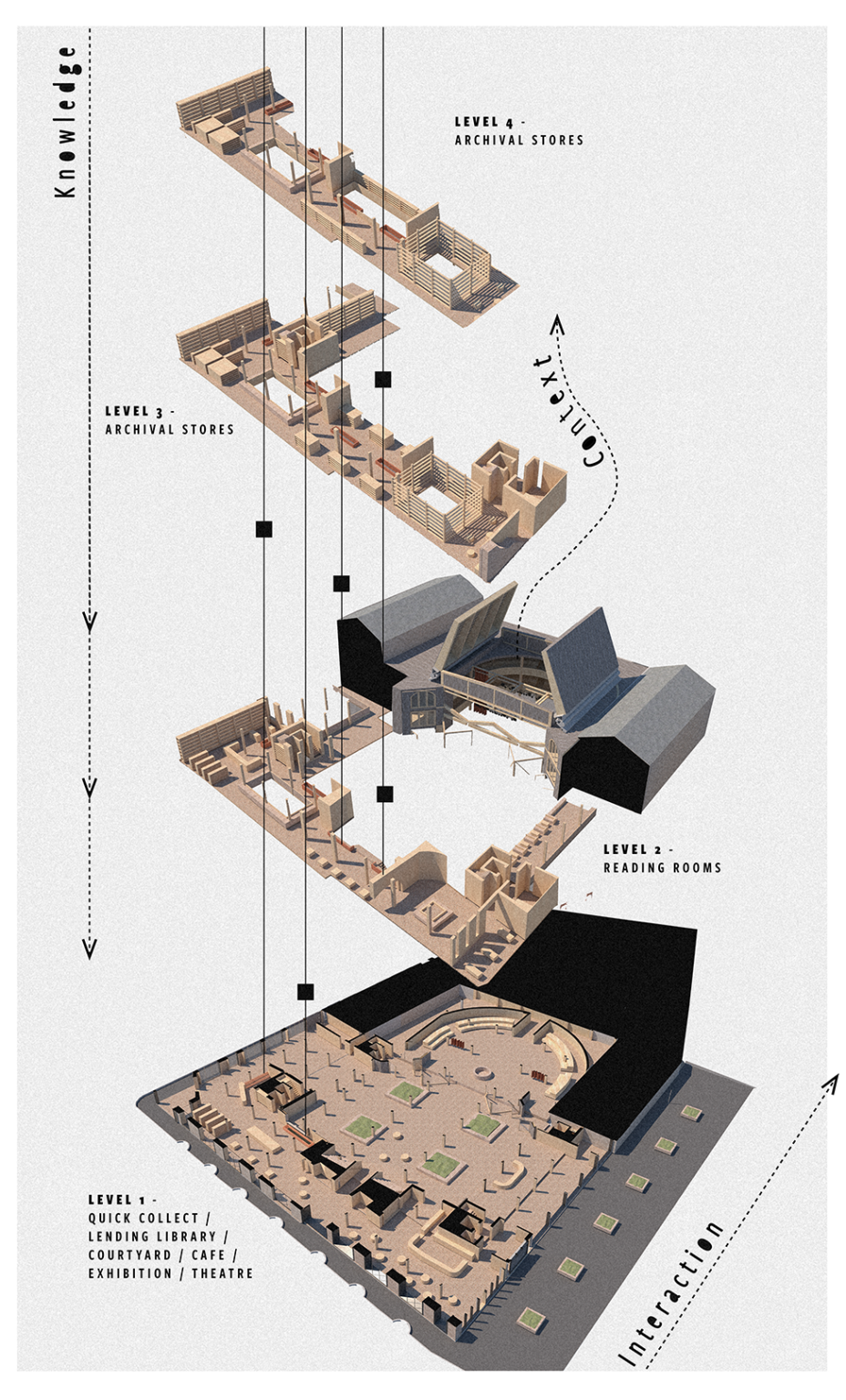 8 of 14
Previous Next
Close 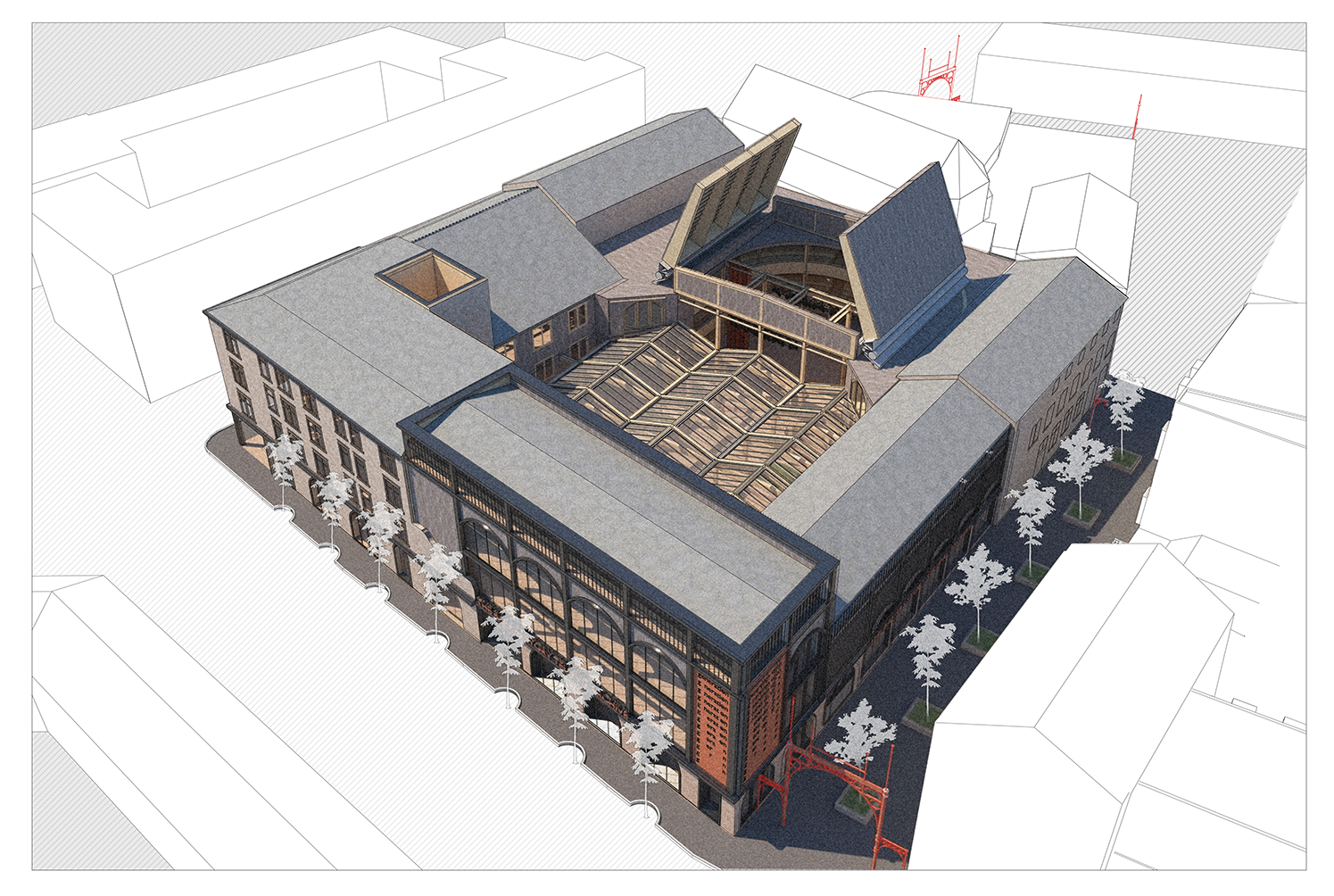 9 of 14
Previous Next
Close 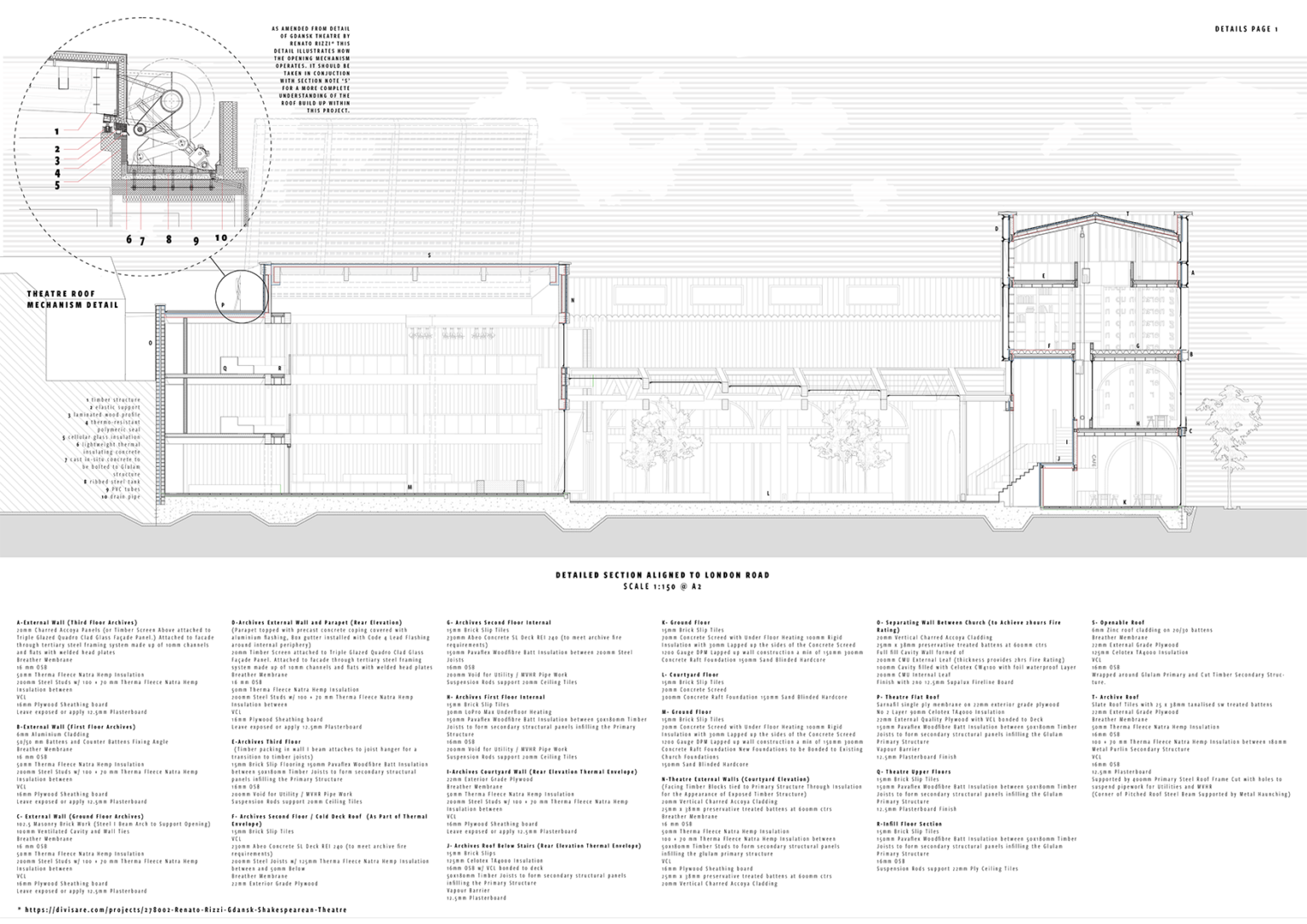 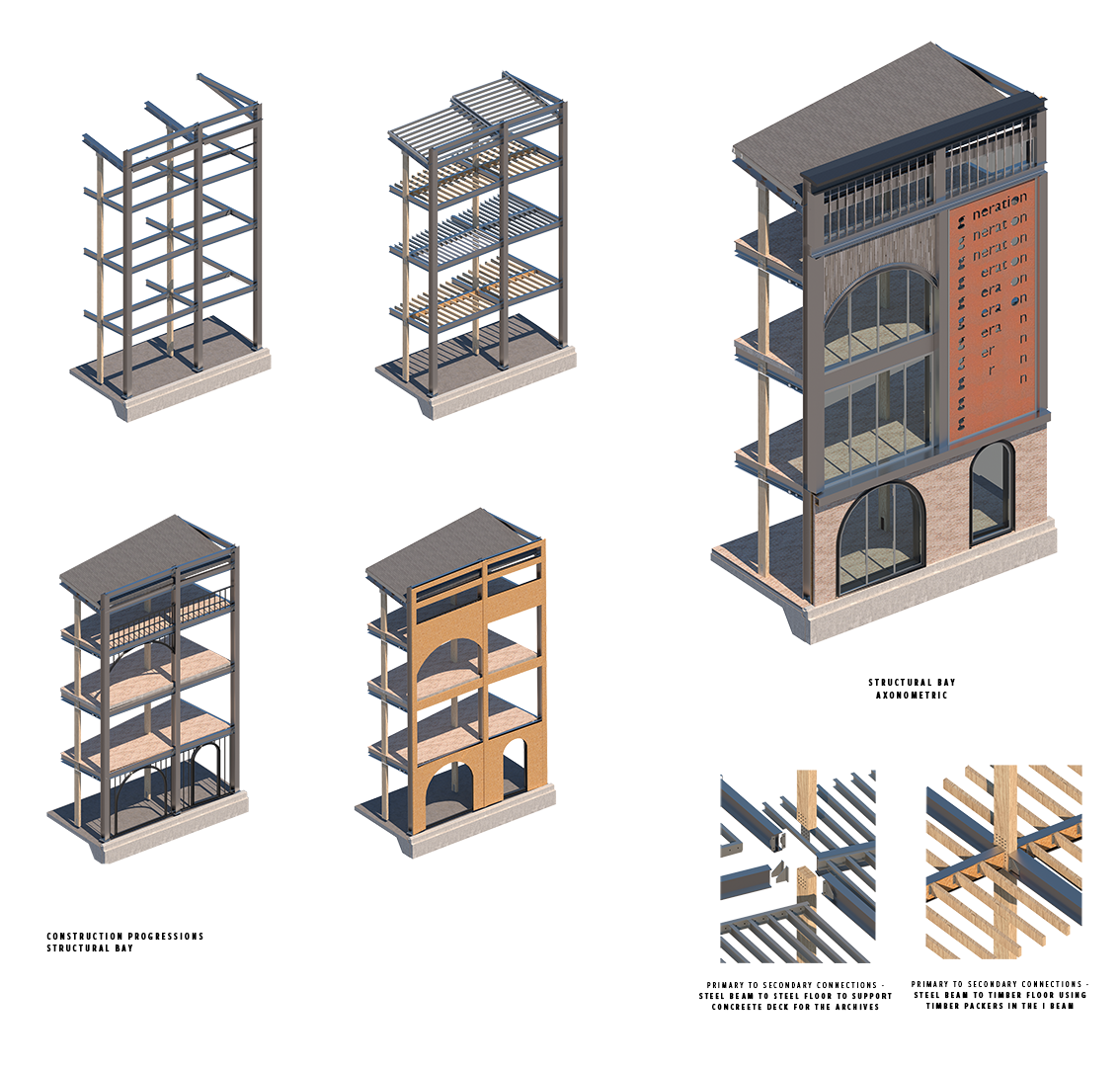 A hybrid steel/ glulam primary structure has been used in order to meet the British Standard requirements that the archives have a four-hour fire rating. This has resulted in the inclusion of an ABEO SL concrete deck with a REI of 240. The steel structure helps support this without having to increase the size of the glulam beams to a point where the cost of build would be infeasible
13 of 14
Previous Next
Close 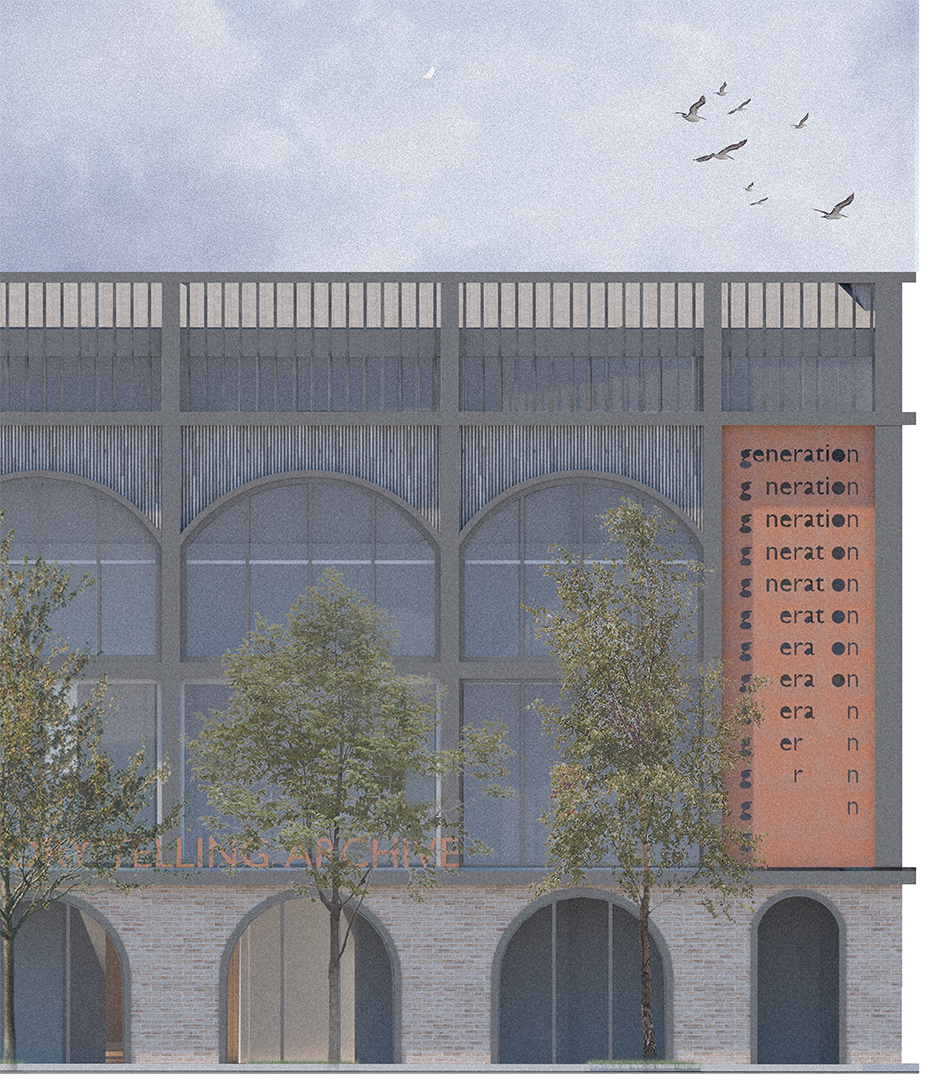 In terms of façade hierarchy- the use of steel structure with a masonry wrap around ground floor to connect old and new- reinforces the idea of Glasgow’s industry as being integral to the history of the barras and Glasgow green. The transition from a steel structure to timber in the courtyard notionally represents the trees in the green and anchors the proposal back to this connecting route. Finally, an inclusion of my initial poem inscribed onto Corten steel panels ; gives the building an identity – reinforces its concept and links the proposal through its colour to the defining Barras gates which characterise the Calton area.
14 of 14
Previous Next
Close