The Self and the City

The Self and the City: An Ontological Investigation into Individualism and Impermanence in Architecture

Mark Fisher proposes Capitalist Realism as the contemporary construction of capitalism which has created the ultimate structure of socio-political and economic systems, of which there is seen to be no alternative. It is however, “both … a hyper-abstract impersonal structure and it would be nothing without our co-operation.”

This is mirrored by Adam Curtis’ HyperNormalisation which describes a world of hopeless, individualistic consumerism by powerless individuals complicit in a system of plutocracy exploiting themselves and their planet. The people avoid the nightmarish real world by seeking refuge in the believed freedoms of cyberspace, in an attempt to find their authentic self. As conservative politics of stability and risk aversion pervade globally, Curtis argues that this stability is an illusion that the population are totally aware of but are powerless to change as they see no alternative. Fisher writes: “It is easier to imagine the end of the world than the end of capitalism”, hence for Curtis, HyperNormalisation occurs as life continues.

This project responds directly to the need for a more communal way of living, in opposition to the individualist standard model of housing in the UK. This is proposed in a medium-density, medium-rise co-housing project which revolves around shared living spaces. The ground floor leaves room for a circular economy focussed programme which connects with the wider community, including flexible working spaces, repair shops, shared tools and household items, and a communal library, along with other positive aspects of the co-housing model, such as shared cooking and childcare.

By focusing on a forum for interaction, integration and gathering with the wider community, this thesis aims to build for communities and collective action, as civil society emerges through ‘Less Self, More Other’, as Richard Sennett suggests. Further, the design will be in keeping with Sennett’s concept of a designed disorder: open systems which evolve the city, rejecting the simplicity of market-driven, one-dimensional building in favour of the complexity of embodied reality. In order to encourage grassroots power, the design questions and challenges engrained hierarchies, systems and perspectives currently seen within UK housing and societal norms, providing an alternative form of relationships and responsibilities amongst families and communities.

Informed by Curtis, I have extracted themes of uncertainty and impermanence within contemporary culture that I would also like to respond to with respect to the Ethical City. These themes result from a disconnection between the world we create inside our heads and embodied physical reality, resulting in a collective anxiety. These boundaries are further disconnected through the online civic spaces of social media which paradoxically bring us closer together whilst driving us further apart. The inclusion of publicly accessible and clearly visible cemeterial architecture is an act of direct-pointing – Zen’s upaya – to clearly present the impermanence of life and reconnect the viewer with their embodied reality. This follows Sennett’s designed disorder that disregards conventions that act to disconnect. The provocation of this is the development of compassion and empathy that follows reflection and meditation on the impermanence of life. The aquatorium and surrounding cemeterial buildings, therefore, reinforce collective cohesion within the communal housing and wider community by providing solace.

Together, the co-housing and the aquatorium create spaces for connection and spaces for reflection, though they are not mutually exclusive. The two programmes overlap and inform each other, trading activity and passivity to create a holistic reification of the present moment through mutual observation within our community and meditative observation of ourselves. 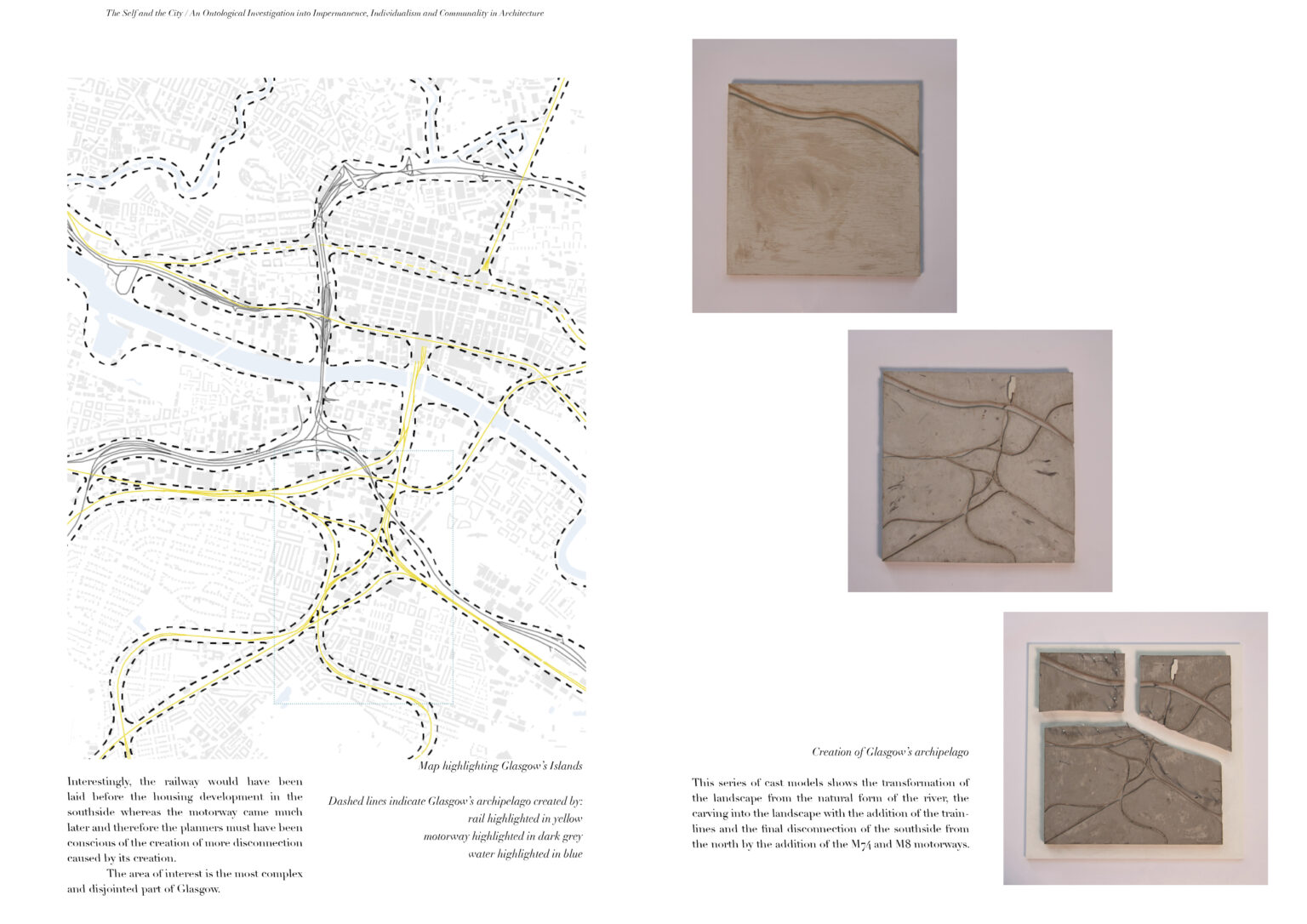 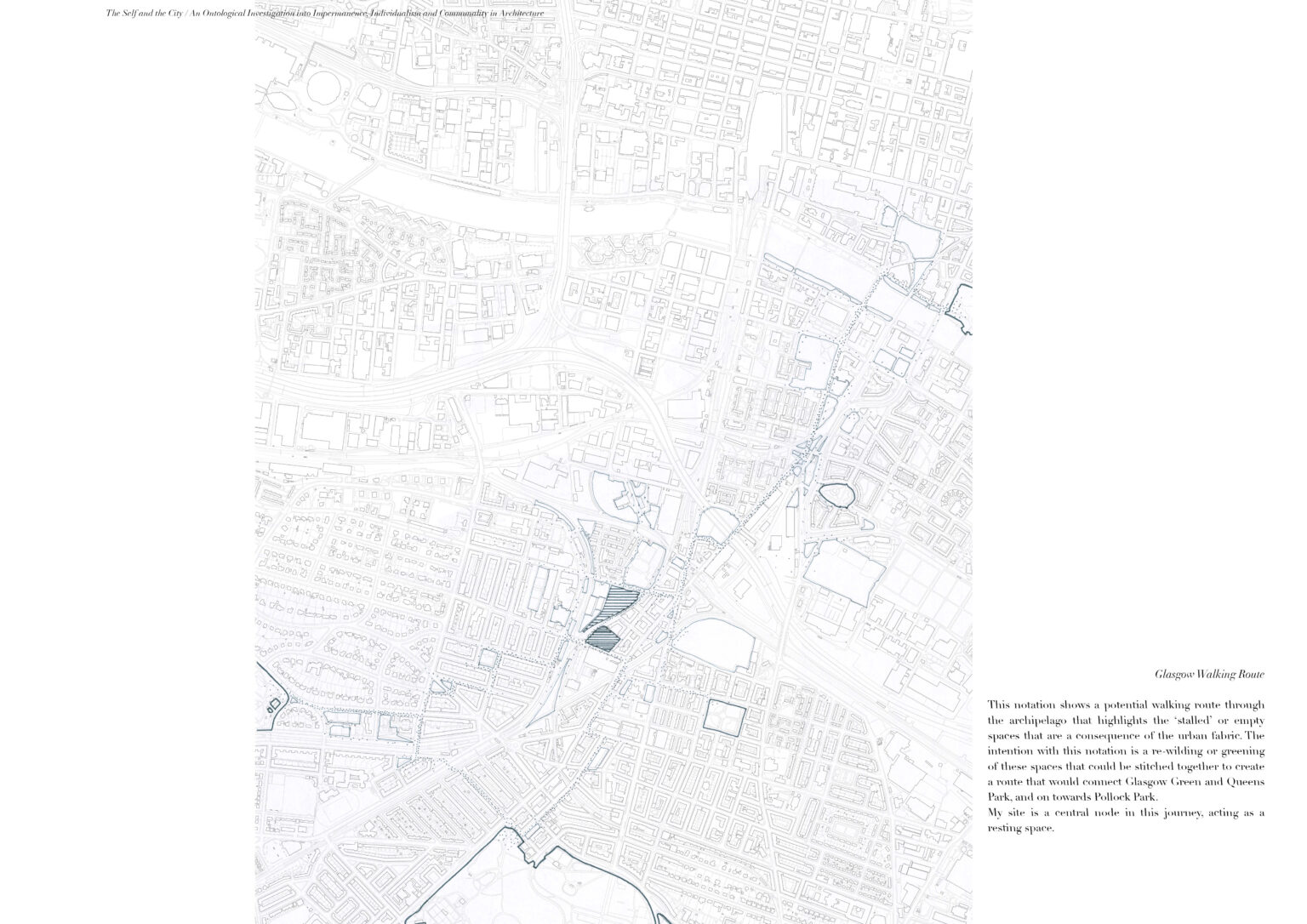 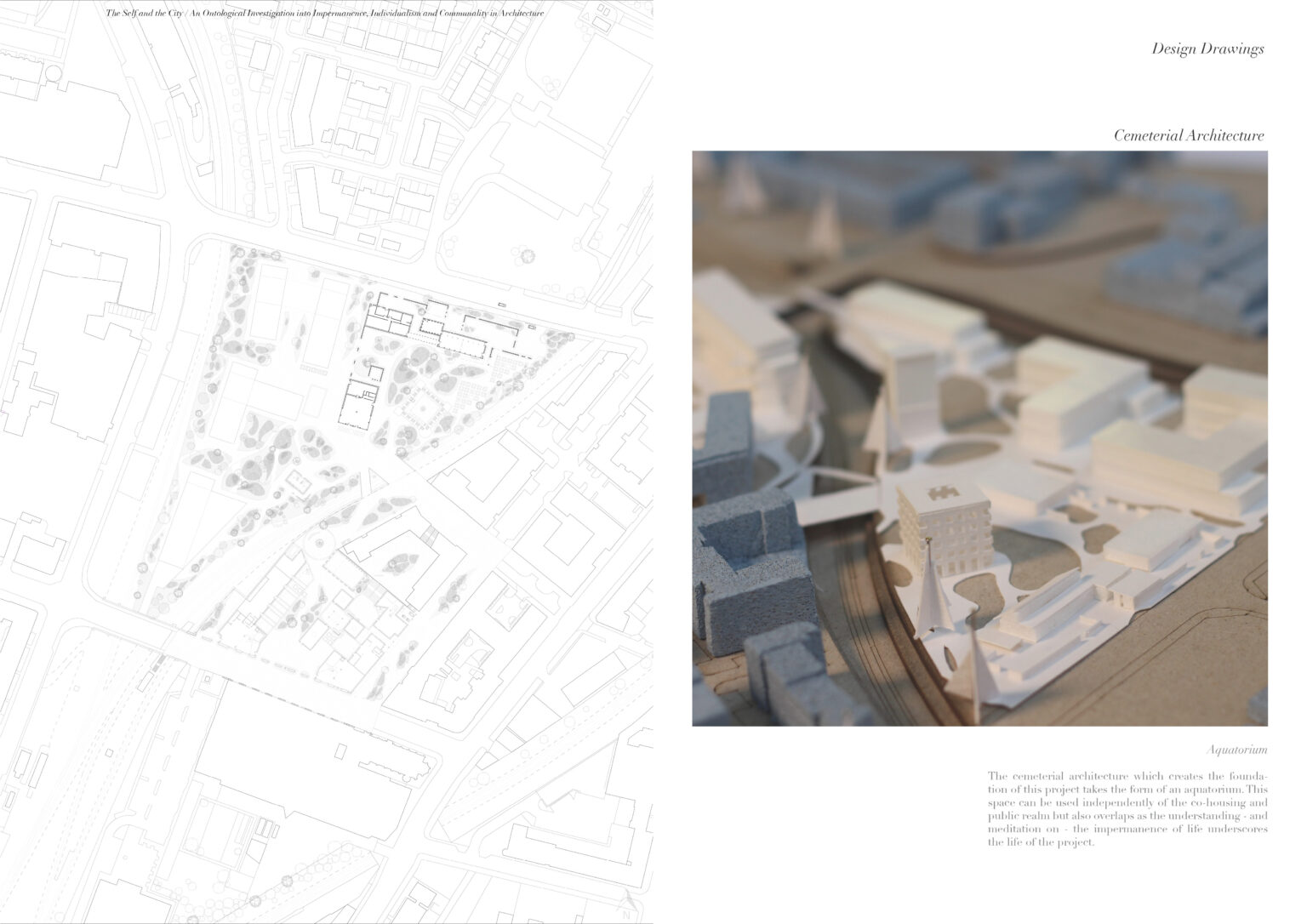 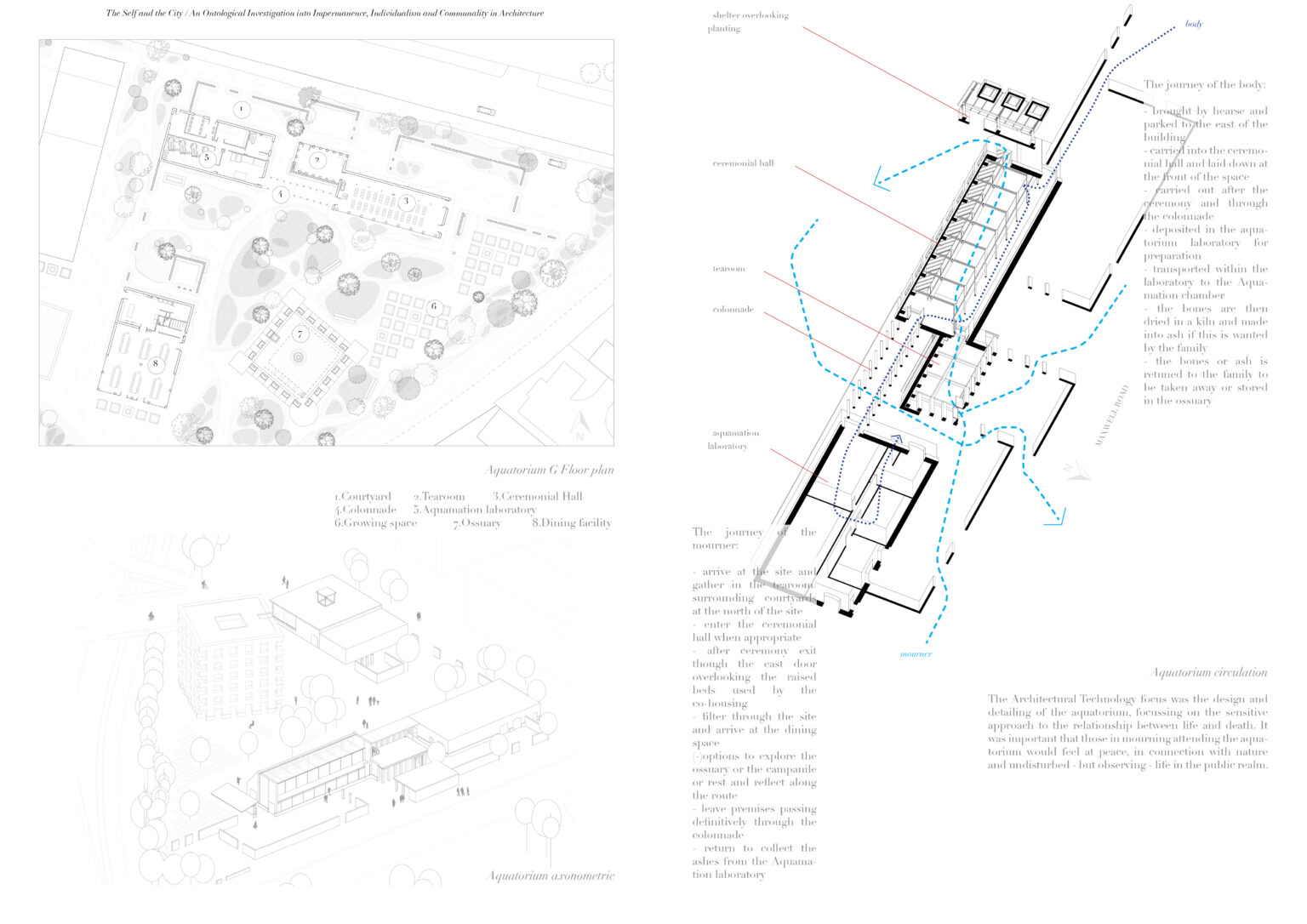 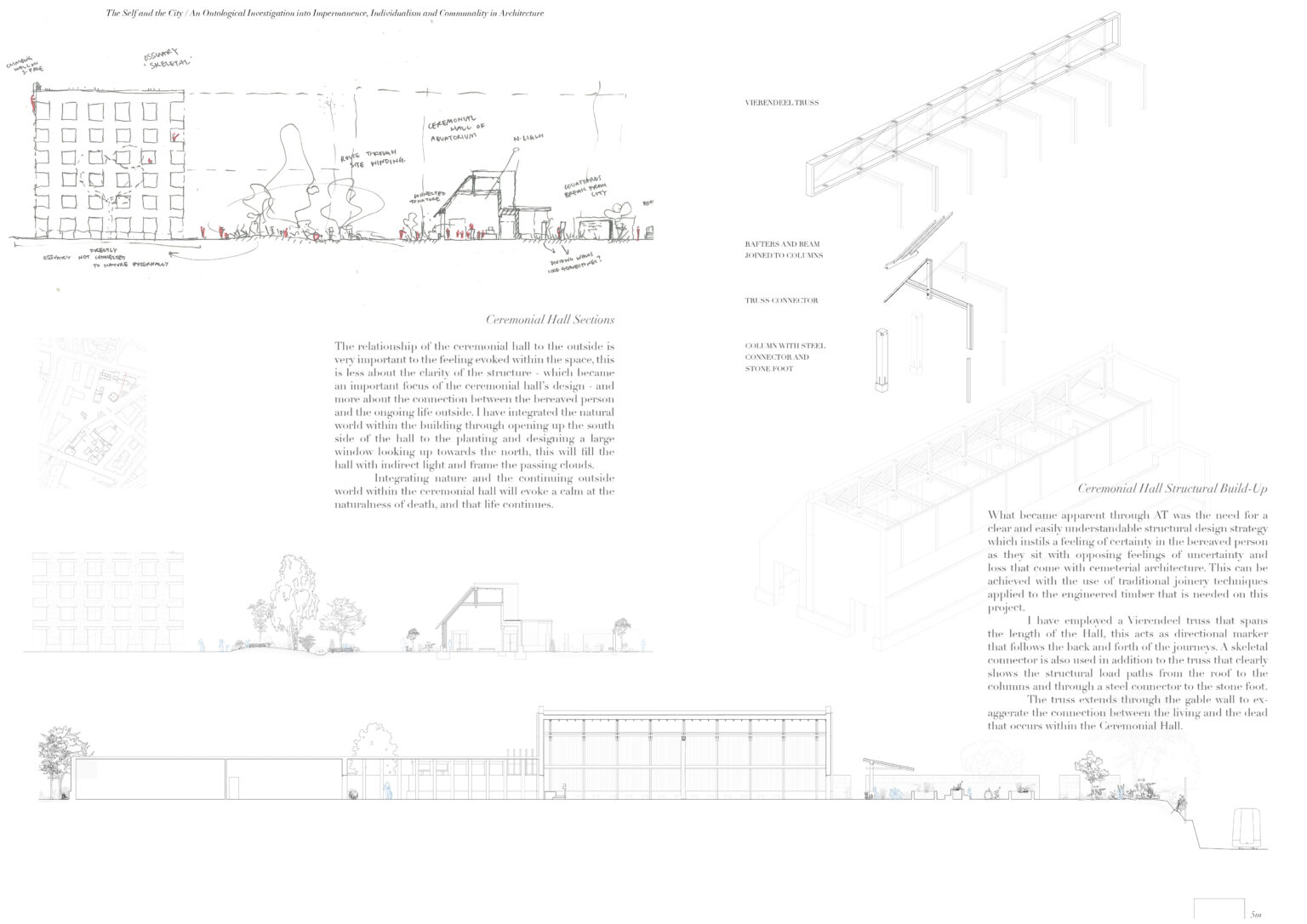 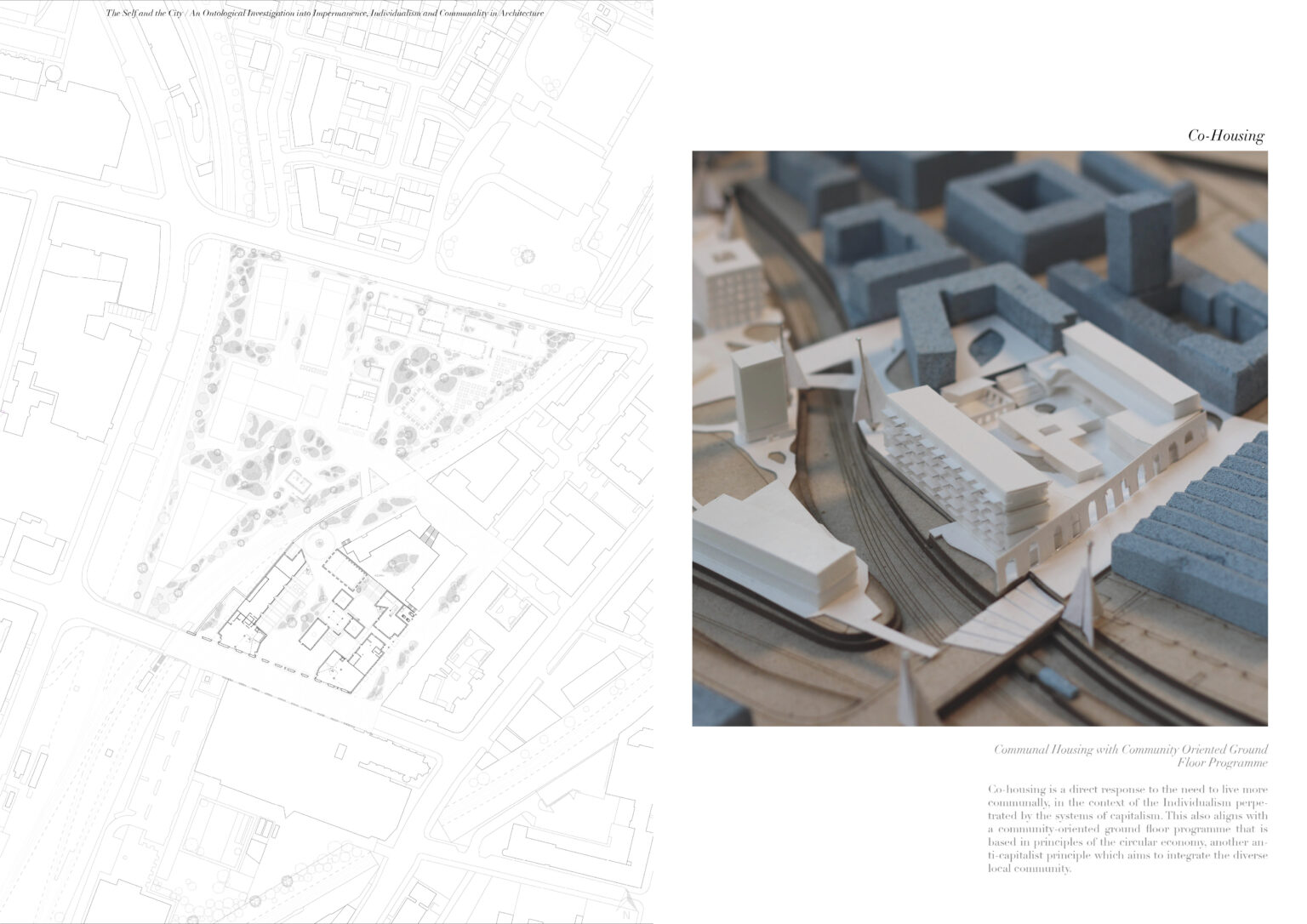 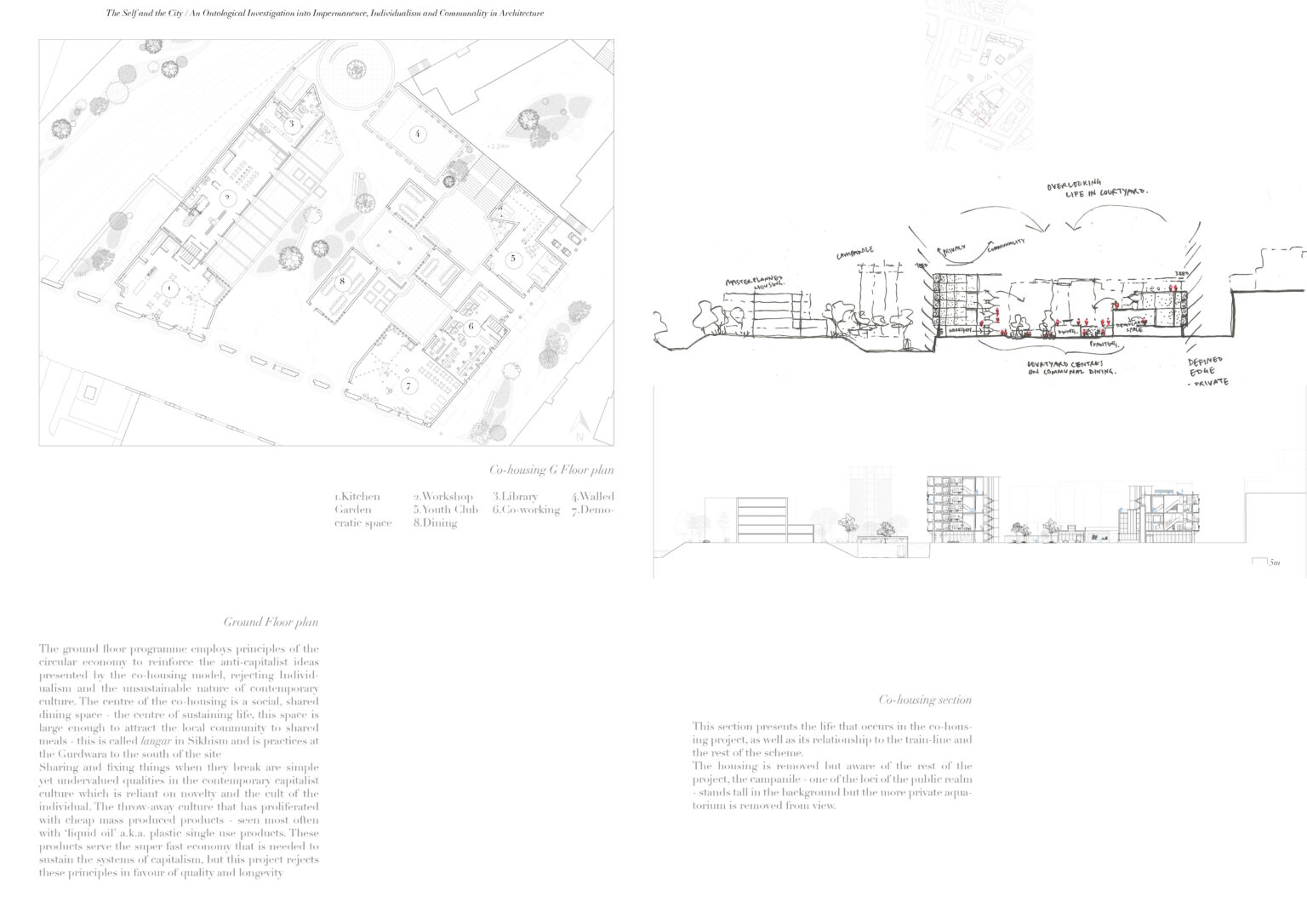 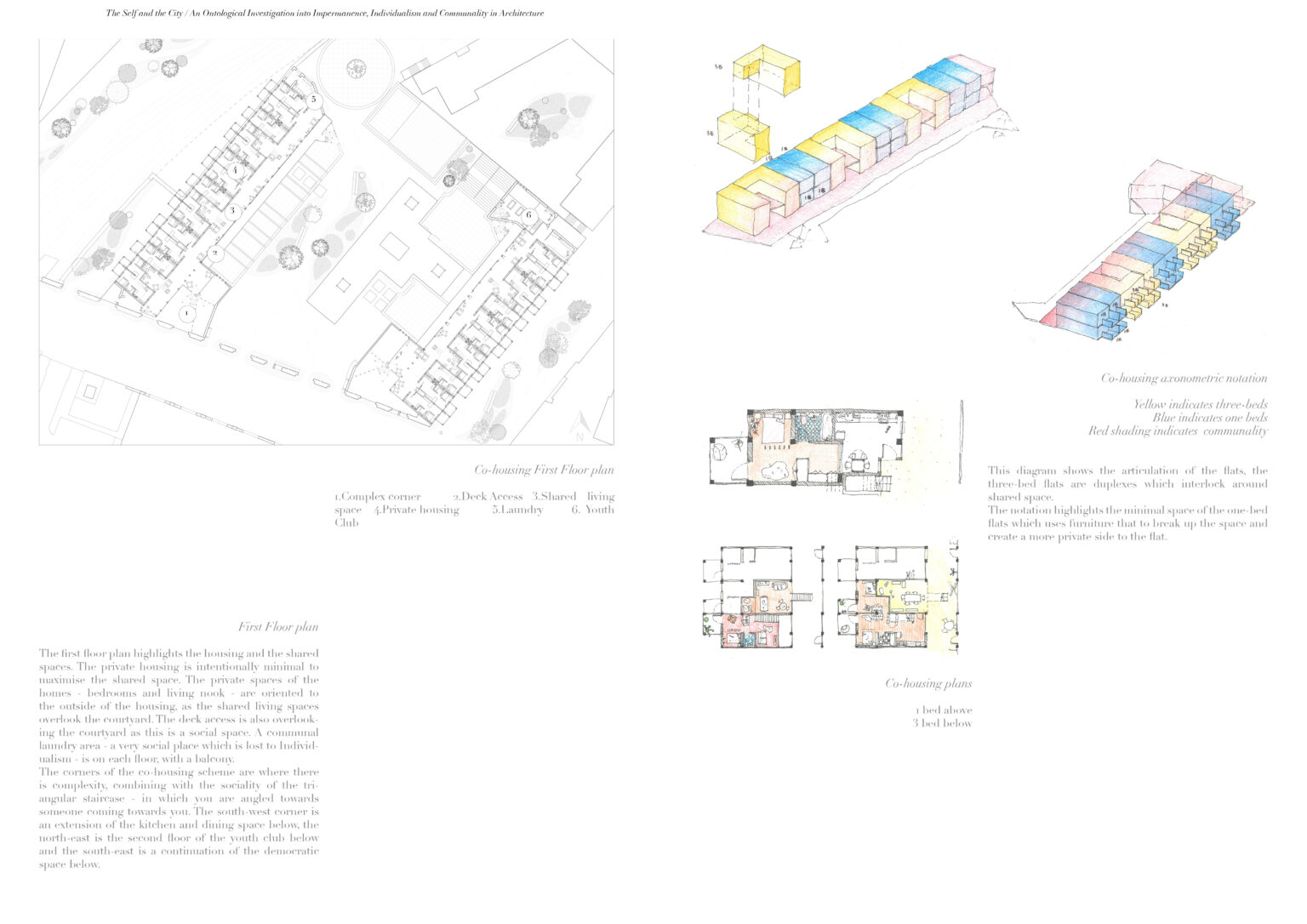 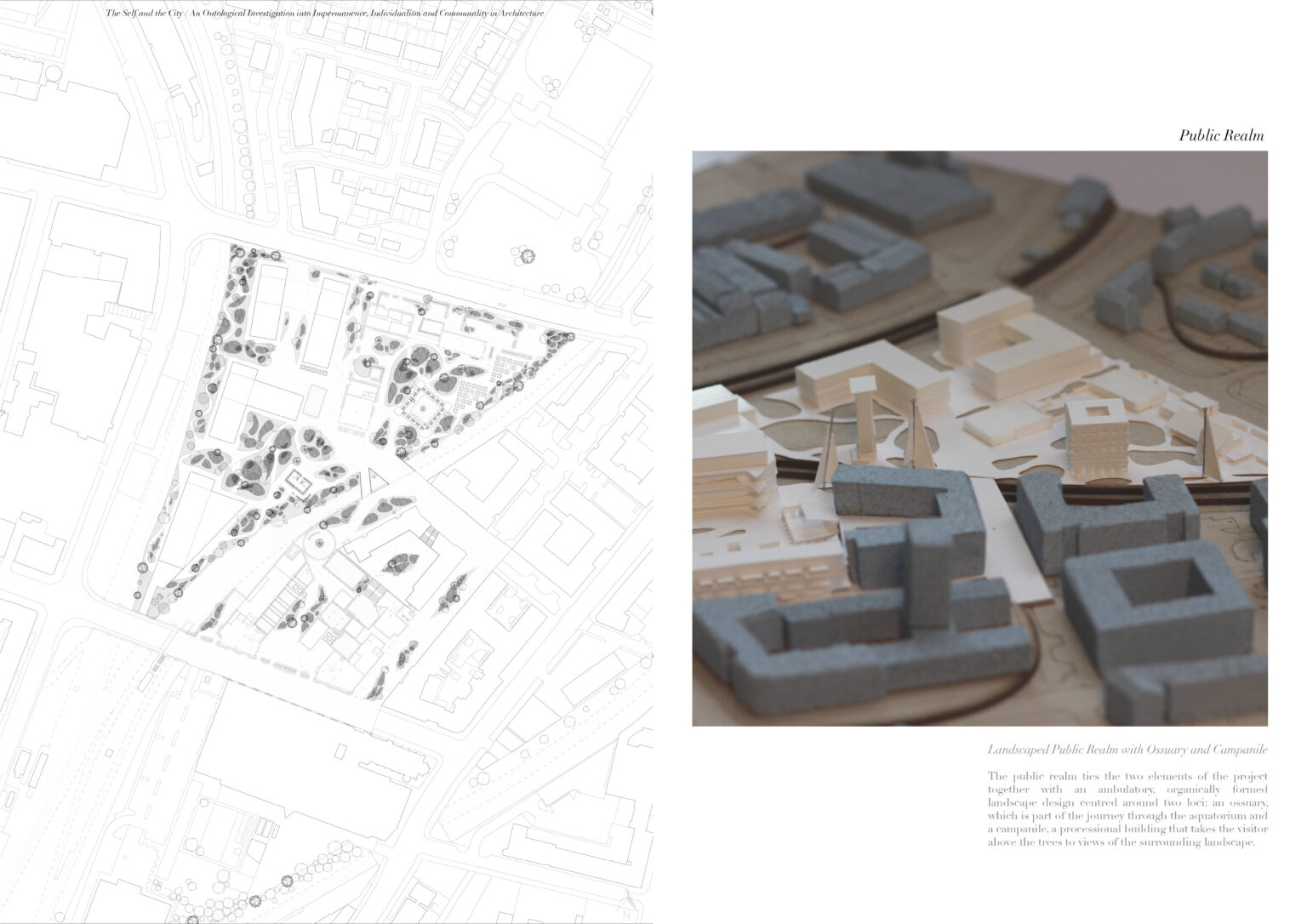 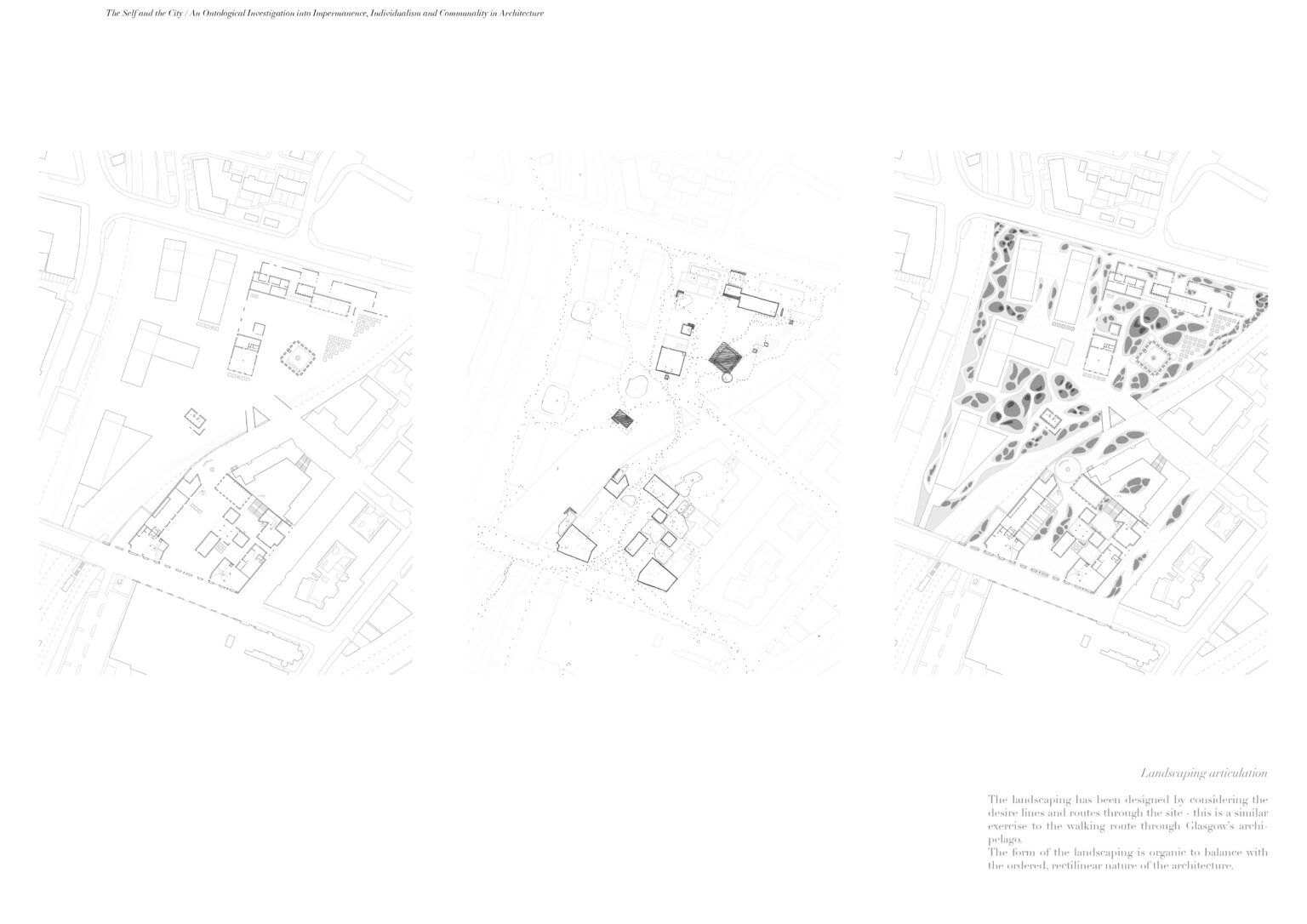 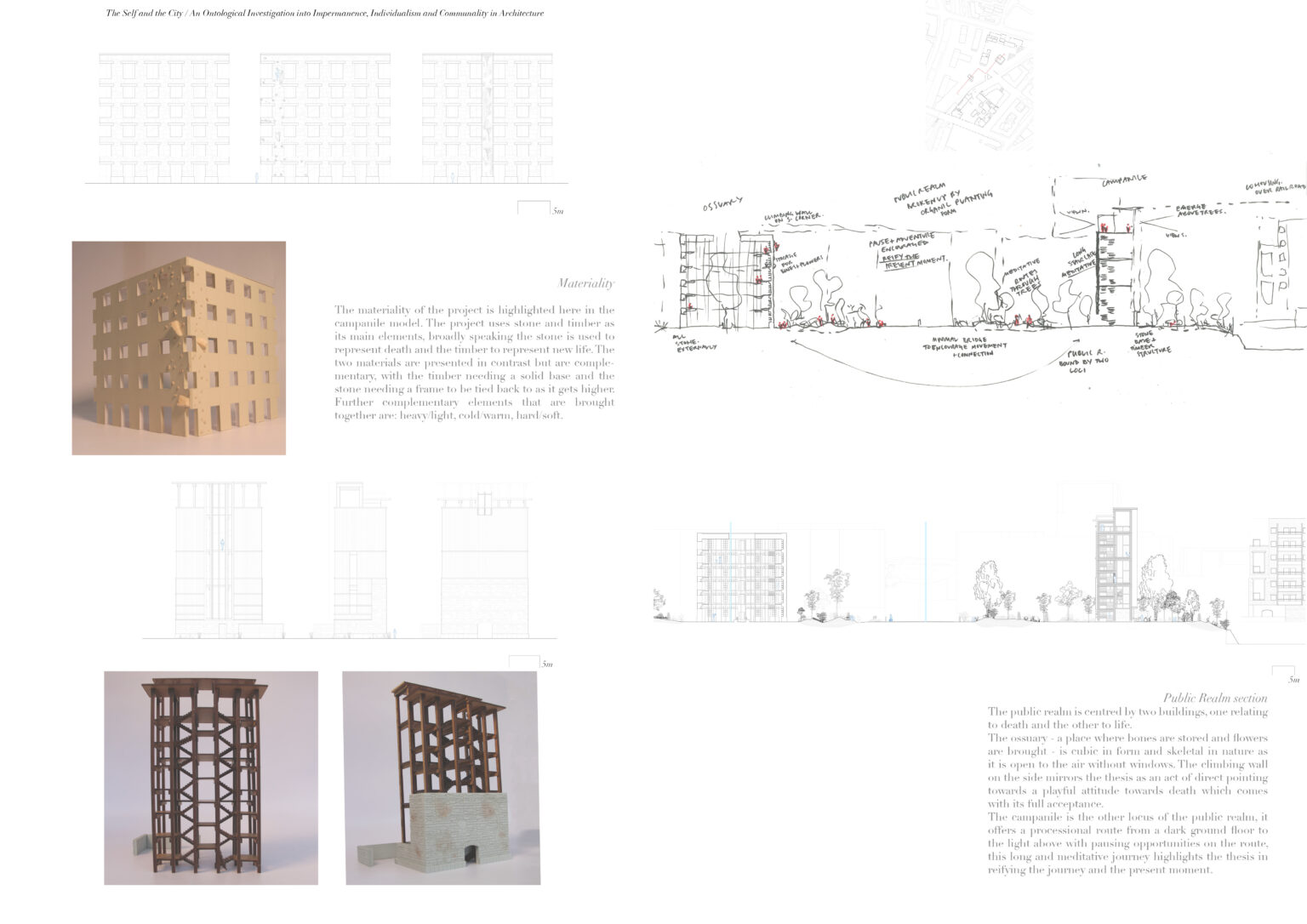 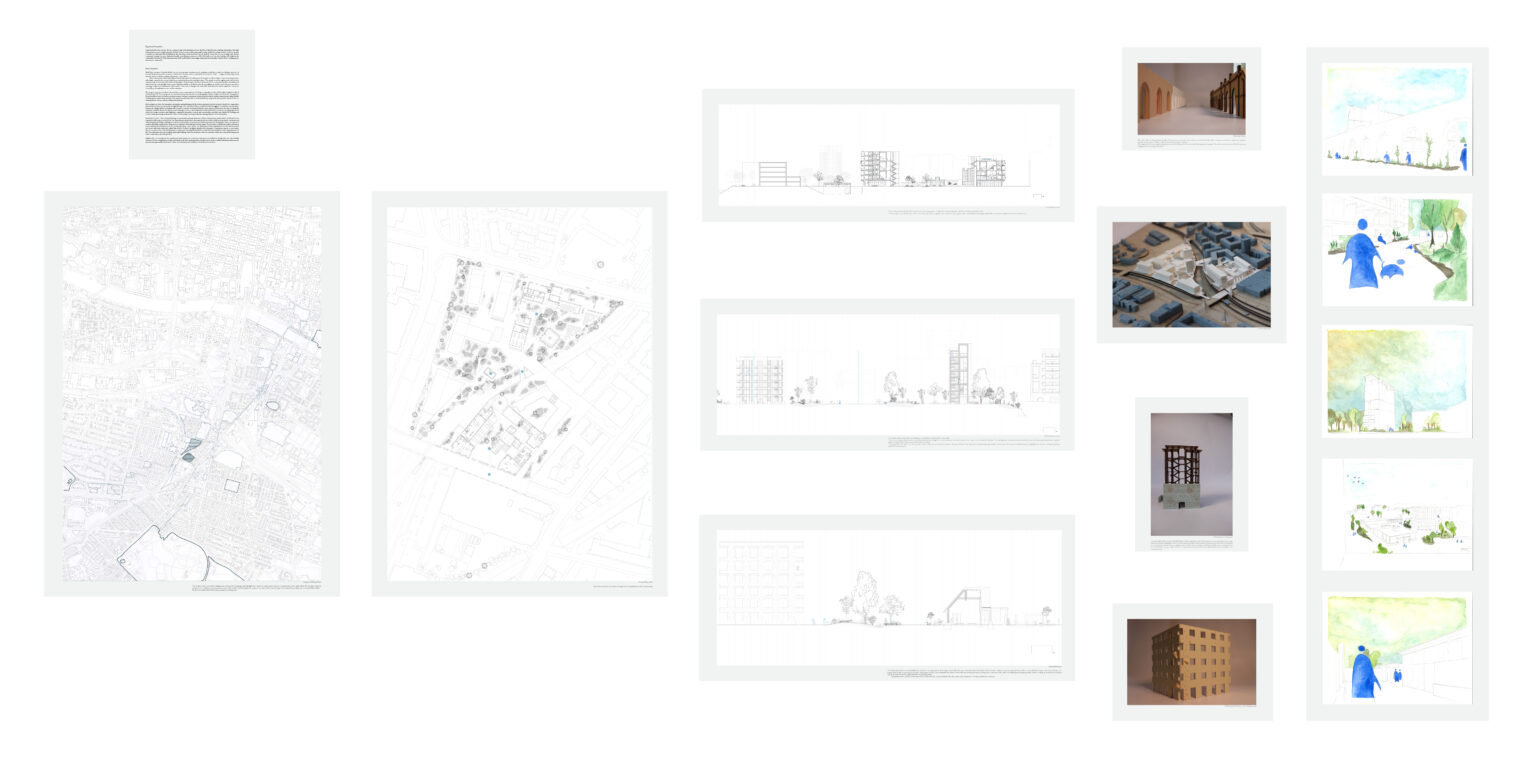