The idea for my project was to do a full sound design and replacement for the conference on the Death Star from Star Wars A New Hope. Where I am going to replace the sound effects, music, and that dialogue with new audio. I will use this to show my improvement in my skill set over the past six years. Believing that I have improved has helped me created this clip and that people that are overly negative should not matter to me more than the people that would give me constructive criticism.

The clip is not finished yet there are still a few things that I what to add and I wish to re-record some of the dialogue sections as they are either clipping or fading out at the end. There is only music at the start of the clip and I wanted to keep it that way as it keeps the focus on the conversation between the high-ranking officers discussing what to do with the rebellion. The clip is not mixed fully and I still need to master it to fit industry standards

For the TWERK project, I had to ask myself the question of what do I want from this project.  I want to be able to show my improvements over the last 6 years of study on various courses. I realize that it does not matter as much as I thought as it should only matter to me how I have improved. However, it would be good to see how I have improved from college to university for my own prosperity.

So, I have decided to make a new sound design for a scene from Star Wars A New Hope that is a conversation between four characters, from Star Wars is a somewhat difficult thing to find that is not an intense action sequence. I want to focused on the story that is told by these characters from a film that has spawned one of the biggest fan bases and expanded universe that I include myself as a fan of the franchise I can safely say that I can do a good job with the scene. I am working on a plan on going about to do the clip trying to get the software working as getting into SimVis is impossible living in the area that I do this mean I do not have access to the workstations and studios at the Hub. Despite this, I still feel confident I can stay on track.

The Voice actors are me as Tagge, Pete as Tarkan, Mark as Mottie, and my father as Vader. I have seen everyone act in some capacity before and I know that they did a great job in the respected roles that I set for them. I am thankful to all of those who helped me with this project and I would ask them all to work with me in the future.

Through the course of this project, I have found new ways of looking the way I go about creating sound design clips to make them sound more natural through my use of EQ and reverb as I spend a lot of time getting the ambiance of the room correct viewing the original clip many times focusing on the sound that makes up the room ambiance as I now look at the material that the room is made up of and who sound would be affected by them as well as what is inside the room is it empty or fully furnished, is it drywall or made of metal.

These skills that I have developed will help in the future and I will keep looking for ways to improve my workflow to be more efficient and accurate with my sound placement and editing. 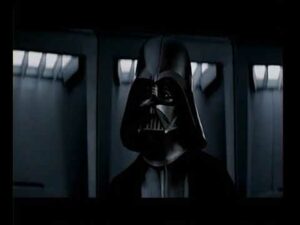