The film is set to transform the viewer into my crafted world. Ideas, objects, visual languages all sew together the logic of my character’s existence within this new realm. Frames are built up throughout sequences that emphasize the eye of the audience, looking through a peephole into this new yet slightly familiar place! Scenes are built to be like moving paintings, alluding to some sort of action, playing on forced perspectives, and being visually stimulating. Ultimately the film acts as a documentation of my plight to explore my own understanding of the function and what it means to function in the modern day. I thought I could better understand something so intertwined with human theory by becoming something a little less human. 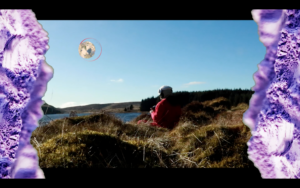